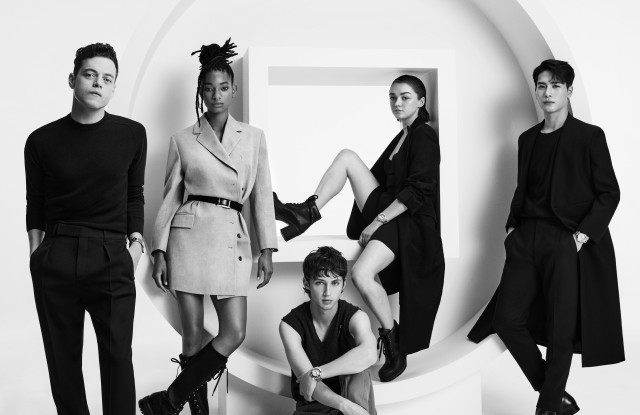 In its latest Sustainability Report published Friday, the Geneva-based corporate giant says it wants to see “luxury create benefits for all.”

Compagnie Financière Richemont is making strides on the sustainability front, looking closer at sourcing and raw materials, accelerating its climate-related targets and tuning into the needs of Gen Z, while empowering its own brands to pioneer change.

In its latest Sustainability Report published Friday, the Geneva-based corporate giant and parent of brands including Cartier, Van Cleef & Arpels, IWC, Dunhill and Chloé says it wants to see “luxury create benefits for all.”

While Richemont has been regularly gauging — and reporting — its impact on the environment since 2006, the company admitted its focus has mainly been on “mitigating risk” in the supply chain and work environment, and on preserving the longevity of its products, businesses and skills.

Now the company is becoming more proactive, talking openly and specifically about its targets and goals in the fields of people, communities, sourcing, supply chain and the environment.

“This year is a turning point for Richemont,” says Matthew Kilgarriff, the company’s director of corporate social responsibility.

“We’re not only telling our ‘mitigating’ stories, we’re showing where we want to go in the longer term. What we’ve shown in this report are our short-, medium- and long-term goals, what we’re doing so far, with whom and how we are building the strategies to address those long-term objectives.”

The dense, 100-plus page report takes in goals as diverse as a commitment to use 100 per cent renewable electricity by 2025, full traceability of its gold by that same year (the company, which uses mainly recycled gold, is almost there) and the acceleration of efforts to reduce its carbon footprint beyond buying offsets — something that Richemont has been doing since 2009.

The company is also pursuing what it describes as a “comprehensive” waste-management strategy, with the ultimate goal of zero waste to landfill from any major manufacturing and warehousing site in the long term.

The report also takes in Richemont’s work on recycling, the leather goods supply chain, safety measures during the COVID-19 pandemic, efforts to address gender and diversity in the workplace, child care for working parents and donations to the communities where it sources raw materials.

In fiscal 2019-20, the company said it donated 34 million euros, or 2.8 per cent of its profit before tax, to charities concerned with health care, social and economic development, education, women’s welfare and children in those communities worldwide.

The influence of company founder and chairman Johann Rupert on the report, and on Richemont’s environmental and human resources ambitions, is not to be underestimated. Rupert has long been vocal about the stress that humans place on the environment, and about the need to make fundamental behavioural changes.

As reported in May, on the day Richemont published its 2019-20 results, Rupert said the pandemic and subsequent lockdown measures would result in “not a pause, but a reset. We don’t know what all the outcomes will be, but luckily we’ve positioned ourselves in such a way that we’re not in throwaway luxury. We have to look at the way we live, because there will be changes — and maybe changes for the better.”

Rupert added that “it’s up to science now to dig us out of the hole that we, as mankind, put ourselves into, by our lifestyle and our abuse of the environment and the way we were living. If you think every single human being alive today, if we had to be put in a tube and boxed in like sardines in a tin can, we could easily fit into one cubic kilometre. That’s all. And yet, look at the way we live. We’ve used and abused I would guess 70 per cent of the world’s natural resources. We still act as if climate change is not real, we’re dumping plastic everywhere and now nature retaliated, so maybe it’s time for us to pause and to think. Maybe it’s a very good thing that’s happened to us, it gives us a pause.”

He also said he foresees more demand for “discreet, well-made artisanal products,” and that the big luxury companies like Richemont have a role to play to preserve and create these specialised jobs. “People will understand the value of job creation, and artisanal values will be appreciated more and more.”

Richemont’s new sustainability report also underlines just how much head office is empowering — and taking the lead from — the brands in its portfolio. Indeed, Kilgarriff has given brand leaders training and toolkits to make their own changes, and highlighted those brands that have been at the forefront of change.

Each of Richemont’s “maisons” manages its own CSR agenda independently of the group and of one another, while annual strategic planning processes include CSR objectives linked to each brand’s unique characteristics.

In the report, Richemont described IWC Schaffhausen as a “sustainability leader,” and noted that it was the first luxury watch brand to sign the Ellen MacArthur Foundation’s New Plastic Economy Global Commitment, committing to the reduction of plastic waste.

IWC has introduced new packaging, which contains 90 per cent less plastic than before, and reduced the average packaging weight and volume by 30 per cent. It is also making sure that shopping bags are both recyclable and are made of 100 per cent post-consumer Forest Stewardship Council-certified paper.

The fine gold used in IWC’s watches is from recycled sources and is Chain of Custody-certified by the Responsible Jewellery Council (RSC), while the food prepared in its Swiss canteens is locally sourced, seasonal and includes vegan options. The watchmaker also subsidizes its workers’ commutes by public transport.

Later this year, the watch brand plans to publish its latest stand-alone sustainability report, describing progress against its 2020 targets, and setting new targets for 2022.

Richemont also pointed to another of its watch brands, Panerai, which launched the Submersible Mike Horn Edition in 2019 using, for the first time, a new alloy with a high environmental performance called Ecotitanium.

Richemont says the material offers top mechanical properties, such as corrosion resistance and lightness, and is mainly used in the aerospace industry.

The Ecotitanium that Panerai uses is made out of a minimum of 80 per cent of recycled materials, and its production involves far less energy consumption and environmental impact compared to traditional titanium, according to Richemont.

“This type of initiative contributes to the creation of new circular economy supply chains able to source and recycle metallic scraps, potentially without limit,” the group said.

The company explains that Panerai team had long been looking for the right sort of titanium alloy, and added that this one is ideal for sailors because it is impervious to salt water and the chemistry of the sea, which can damage other metals.

With regard to gold, Richemont believes it is “on track” to deliver 100 per cent CoC, or Chain of Custody, certified gold, be it recycled or from small-scale mines.

“This will not be achieved within a few months, but within a few years. When we reach the end of that path, most likely in 2025, our maisons will have the opportunity to engage with their customers about the gold used in their jewellery, watches and writing instruments,” says Richemont.

Right now, the company says it knows exactly where 90 per cent of its gold comes from, and that it favours recycled gold — as opposed to large-scale mining gold. Recycled gold is friendlier to the environment as it does not require pulling rocks out of the ground.

Richemont also adheres to strict diamond and coloured gemstone tracing and trading standards and is encouraging its suppliers to become certified members of the Responsible Jewellery Council.

At group level, Richemont explains it conducted a wider review of the plastic used across its operations, including branded packaging, catering and logistics.

During the year, the types and volumes of plastics used by all maisons were analysed by material type, by carbon emissions and by brand. The company said its brands are learning from the preliminary findings and expect to apply them in the years ahead, reducing the volume of plastic components used in branded packaging and offering a broader choice for customers.

With regard to paper and packaging materials, Richemont says the brands and group have chosen, whenever possible, to use 100 per cent responsibly sourced, wood-based materials in line with Forestry Stewardship Council standards.

“YNAP faced many challenges, such as the difficulties encountered in shifting from standard contracts into green energy procurement contracts, and the regional price differences for green energy certificates in different markets,” the report details.

It adds that YNAP is also working on reducing its global emissions and energy demand as much as possible, by constantly exploring new technologies and processes.

In the report, Richemont revealed that it is looking at the behaviour, habits and priorities of Gen Z. Even though that demographic is not its core consumer, the company still wants to understand the under-25 age group and shape its future sustainability and corporate ethics policies around them.

The company says “this cohort of under-25s is already being employed across our maisons and, for some, increasingly represent our customer base, particularly in the Asia-Pacific region. Understanding Gen Z is critical to the future of our business. We already know that Gen Z want to work for companies with purpose, buy from businesses that tackle social and environmental problems, and expect greater product and corporate transparency.”

In the interview, Kilgarriff says “a 20-year-old today is not a typical Richemont customer, but we are building perceptions now for that generation, and those perceptions will shape the relationship that we have with them in five, and ten years’ time.”