The 24-carat Moon of Baroda appeared in the film *Gentlemen Prefer Blondes*.

On November 27, the Moon of Baroda—a 24-carat fancy yellow diamond necklace worn by actress Marilyn Monroe in the 1953 film Gentlemen Prefer Blondes—will cross Christie’s auction block in Hong Kong. The gemstone (which is approximately the size of a thumb) has a fascinating backstory that far predates its cinematic debut: It can be traced back to the 15th century as part of the collection of the Gaekwars of Baroda, princes of one of the oldest and most important ruling families of India.

“The diamond’s discovery and lineage in India at the time indicate that it may have been originated from the Golconda region,” says Connie Luk, Associate Specialist of Jewelry, Christie’s Asia. “The Golconda mine is the first ever diamond mine to be discovered in the world. Golconda diamonds are exceptionally rare and sought-after.” A host of important large diamonds can be traced back to the Golconda mine, including the Koh-i-noor (which weighs a whopping 105.60 carats and is now part of the crown jewels of England) and the Hope Diamond (which weighs approximately 45.52 carats and was donated to the Smithsonian Institute by Harry Winston). Though the Moon of Baroda is not the largest diamond to be plucked from the mine, Luk says its size is still incredibly impressive. 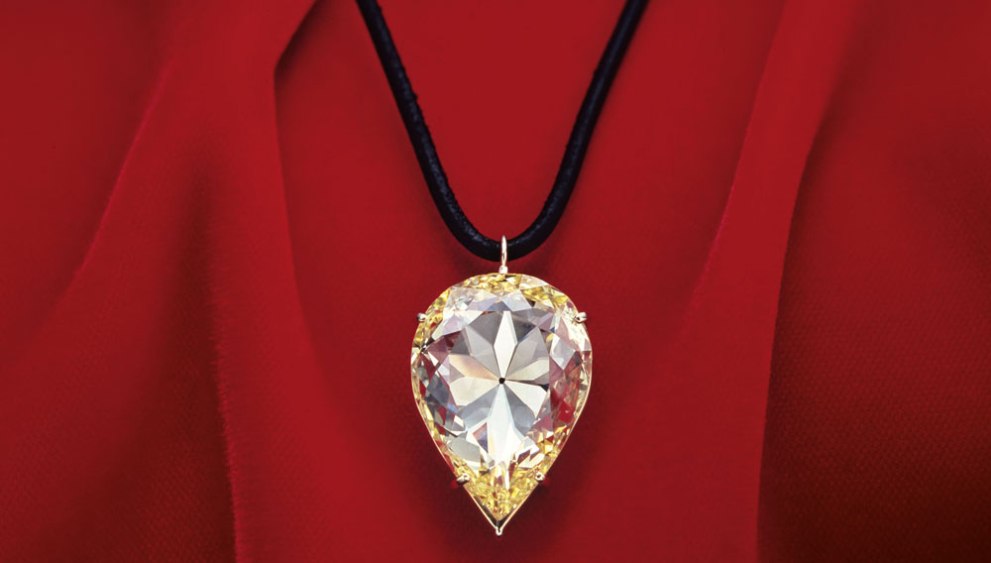 “Besides the significant provenance, the pear brilliant-cut canary yellow diamond’s origin, impressive size, and quality embody the royal flair of Indian nobility, and its allure transcends to the present day,” says Luk. “When the Moon of Baroda was first presented to Marilyn Monroe, she gasped breathlessly and exclaimed, ‘It’s gorgeous!’” Monroe loved the diamond so much that she signed an image of her wearing it and wrote, “Thanks for the chance to wear the Moon of Baroda.” (The autographed black-and-white photograph will be offered at the auction.)

The necklace isn’t the only item with a Marilyn Monroe connection that will be sold next month: her former 1956 Ford Thunderbird will be auctioned at Julien’s Auctions in Beverly Hills, Calif., on November 17, with an estimated sale price of between $420,000 to $700,000.”.