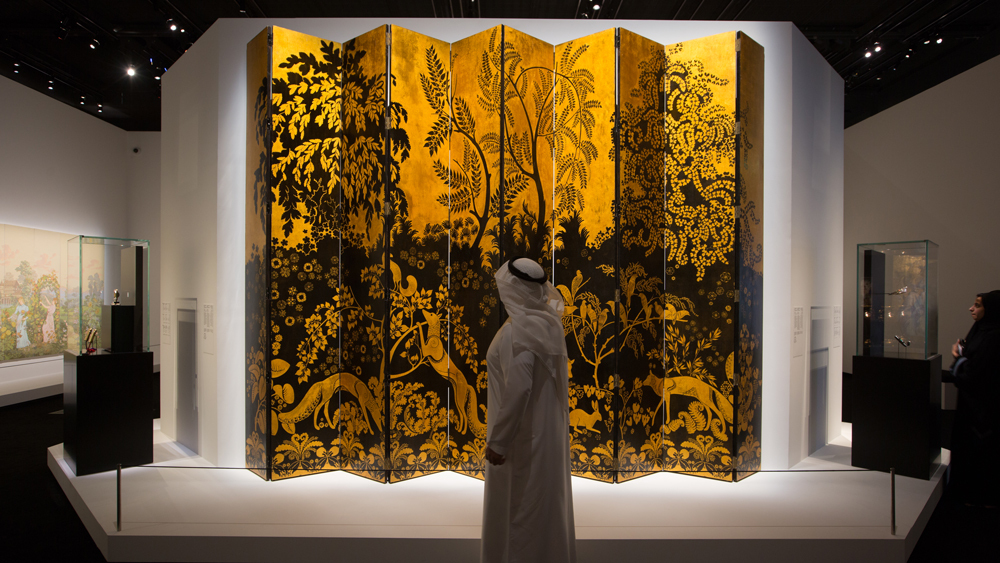 Explore 10,000 Years of Luxury at this Louvre Abu Dhabi Exhibition

“10,000 Years of Luxury” examines how desirability has changed throughout centuries and civilizations.

To hear Olivier Gabet talk, you might think he was a detective. The 43-year-old Frenchman, director of the Musee des Arts Decoratifs in Paris, and curator of the massive exhibition “10,000 Years of Luxury” at the Louvre Abu Dhabi, loves clues.

The role of a museum, according to Gabet, is “to provide knowledge and enjoyment,” for sure, but also to “give people clues about the world they live in.” And the goal of the Abu Dhabi exhibition, which runs until February 18, 2020, is “to give clues about what is luxury today.” And give it does: 350 examples across the ages culled from countries around the world (with the bulk on loan from various Paris museums) serve to reveal how mankind’s views of luxury have changed over the millennia.

“We are surrounded by luxury today,” Gabet said. “It’s everywhere; it’s the lingua franca for people.” But that wasn’t always the case. Indeed, despite the omnipresence of luxury today, there’s often an element of rarity at its very heart. The opening item of the exhibition makes the point loud and clear. It’s the Abu Dhabi Pearl, the earliest known pearl ever discovered, between 5800-5600 BCE, a rare, luminous and large pink beauty.

Throughout the show there are items we might take for granted that were considered luxuries in their time because of their scarcity. A Medieval manuscript bound in stamped leather is on display because, back then, “knowledge was a luxury,” Gabet said.

The preciousness of the materials themselves provides another clue to what a society considered to be a luxury. “In ancient Egypt, wood was hard to find,” said Gabet. And, as with other precious elements, it naturally took years to be created. “Luxury leans on time,” the curator said, “the time for the earth to produce gold, diamonds, pearls—and trees.”

Gold is shown as a symbol of power—think of a crown—and of wealth. On display are gold engraved bracelets made in Iran between 2000-1800 BCE and gold drop earrings made in the 1900s in Mali. The same way that societies in Africa, South America and India piled on gold jewellery to broadcast their wealth, so do customers of Bulgari and Chaumet today.

But there’s also beauty and skilled craftsmanship involved. A necklace by the French company Lalique originally shown at the Paris World’s Fair of 1900, the start of a new century, sparkles invitingly in its vitrine. “But look closely,” Gabet urged. “There are few diamonds, just enamel and glass, not precious stones.”  A towering pair of ornately carved wood doors made in France and shown at the Paris World’s Fair of 1878 show “pure craft, the pure skill that (allowed artisans to) demonstrate their abilities.”

The world of fashion often represents the height of luxury. The show includes a gown by Charles Frederick Worth, the English-born, Parisian designer called the father of haute couture thanks to his exquisite creations. “He was the first real fashion designer,” Gabet maintained “because he imposed his own style rather than have customers tell him what they wanted him to do.” The gown featured in the show, from 1893, is a marvel of orange silk with a train and gathered muslin sleeves, the work of so-called “petites mains,” the little hands of all the skilled artisans in a designer’s atelier who excel in creating the draping, the cutting, the stitching, the beading and the very dress itself. “Behind the important names, you have the thousands of people who have the skills,” Gabet said. “This is a tribute to them.”

Further on, Coco Chanel’s contribution to luxury is acknowledged with an example of her little black dress, deceptively simple with its layers of lace—revolutionary in how it freed women from restrictive garments. It was a novel idea that brought a fundamental change to something as basic as how a woman gets dressed, how she can move. Today, the show suggests, an equivalent luxury might be the search for sustainability as the fashion industry seeks out responsible ways to use materials and even invent new ones to replace those that take a toll on the environment. A diamond has always been and always will be a luxury, but so too is one now created in a lab.

The show ends in an ante-room with a wall of windows overlooking the water and the city of Abu Dhabi beyond. In front of the arresting view is a large hourglass, designed by Marc Newson. As its grains of gold slowly sift to the bottom, it delivers a clue. In the face of one of the world’s most dynamic and ancient cities, an age-old point is made: time is ever slipping away. And these days, an extra hour to sleep, or be with family, or answer emails, or visit a museum show, just maybe the biggest luxury.