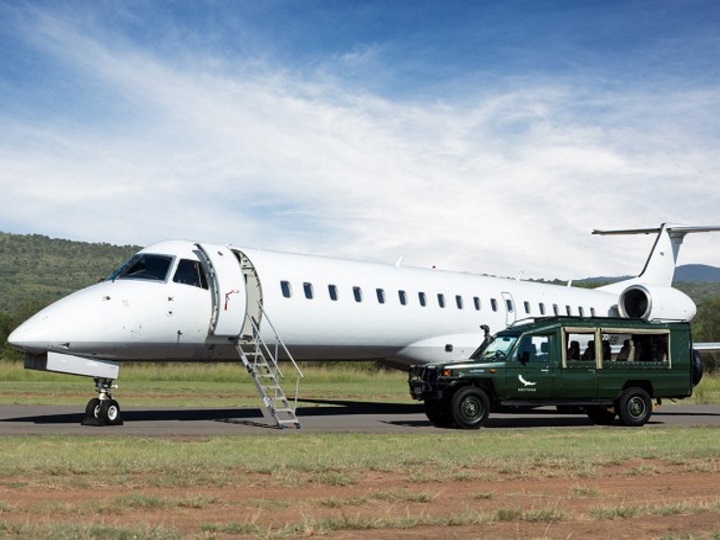 Take off with these private jet trips of a lifetime

This year the biggest trips are taking place high in the sky, with travellers flying from one spectacular destination to the next in ultimate luxury.

When it comes to travel, we say go big or go home. This year the biggest trips are taking place high in the sky, with travellers flying from one spectacular destination to the next in the ultimate luxury of a private aircraft. From a two-week African safari to a bona fide around-the-world adventure, these new private-jet journeys are the ultimate high-flying fantasies. Since 2015, Crystal Cruises and its maverick CEO Edie Rodriguez, has been on a mission to push the boundaries of luxury travel. Six newly built cruise ships will hit Europe's rivers throughout the next three years or so, and three 100,000-gross-ton cruise liners with privately-owned condos will start hitting the water in 2022.

Now following the launch of its first Northwest Passage itinerary last August (and becoming the largest vessel to ever traverse the notoriously remote Arctic Ocean sea route), the up-scale cruise company has yet another first up its sleeve — a trip to the world's 10 Peninsula hotels aboard a private Boeing 777-200LR jet with custom interiors by Greenpoint Technologies. Departing from the Peninsula New York on August 21, the 27-day inaugural Crystal AirCruise , $US159,000 (about $A207,400) per guest, visits two additional U.S. cities (Chicago and Los Angeles) before crossing the Pacific to Tokyo for two days. Guests then explore three Chinese cities (Beijing, Shanghai, and Hong Kong) and venture south to the capitals of the Philippines and Thailand, ending the trip with four days in Paris (Peninsula's first European property).

On-the-ground, activities are customisable, but everyone should expect brand new rooms and suites at the Peninsula Chicago, which underwent a remodel last year for its 15th anniversary, and at Peninsula Beijing, which is still undergoing a $US123 million (about $A160.5 million) renovation.

While at Peninsula Tokyo, guests should also check out the Imperial Palace across the street, take a sushi class with the hotel's head chef Teruyuki Kojima, and watch a private showing of a traditional _Kabuki_ performance.

Other standout offerings include Tai Chi classes at the UNESCO World Heritage Site Temple of Heaven (an imperial complex of religious buildings in Beijing), a private dinner at the Great Wall of China, and a dinner and fireworks celebration during the _Loy Krathong_ festival of lights, where guests will also be able to pay respect to Thailand's ancient goddess of water by floating their own lotus-shaped rafts and candles. Onboard the private Boeing 777-200LR jet, service is comparable to the white-gloved attention to detail that Peninsula is known for. Each of the 84 guests has access to fully reclining seats that extend flat into 187cm beds, Bose noise cancelling headphones, Apple iPads preloaded with personal itineraries, free WiFi, USB ports and power outlets, and a 61cm interactive TV with on-demand programming and a music library.

Exquisite meals are prepared by an on-board executive chef and served with a premium wine list with over 300 world-class vintages and can be enjoyed at your seat or in the separate social space, which includes dining tables and a stand-up bar. There is also a team of Crystal Skye Butlers to attend to your every whim. (crystalcruises.com) – Amanda Millin Grab 49 of your closest friends and hit the skies with travel outfitter DreamMaker's new Passport to 50 private-jet package. The around-the-world trip, priced at $US13,875,000 (about $A18,104,000), takes place in an elegantly outfitted Boeing 767, and stops in 20 cities — including Kathmandu, Florence, Marrakech, and Havana — over 20 thrilling days. Along the way, surprises abound, from an in-flight charity poker tournament with a purse of $US500,000 (about $A652,400) to a set of 50 custom-designed swizzle sticks (each adorned with a golden globe marked with 20 white diamonds for each destination) — one for every lucky guest on this truly over-the-top trip. ( passportto50.com) - Susan B. Barnes Abercrombie & Kent traverses the Land Down Under with its new Wings Over Australia journeys, highlighting the country's most iconic sites and scenes over the course of 13 days. The trips — limited to just 20 passengers and priced from $US25,495 (about $A33,265) per person — promise plenty of Aussie adventures, from sipping local wines in the Yarra Valley and sleeping under the stars at Ayers Rock in Uluṟu-Kata Tjuṯa National Park to exploring the Great Barrier Reef and touring the iconic Sydney Opera House. (abercrombiekent.com) - Susan B. Barnes Gastronomes, get ready: This May, TCS World Travel is sending 52 wayfaring foodies on the trip of a lifetime. Designed in collaboration with René Redzepi — the chef of Copenhagen's Noma restaurant and founding father of New Nordic cuisine — the 19-day Around-the-World Culinary Journey begins with three days in Seoul before carrying on to eight more palate-pleasing destinations across Europe and Asia. The itinerary for the trip, priced from $US135,000 (about $A176,200) per person, features far more than just memorable meals. In Tokyo, travellers can take a sushi-making class with a local master and forage the countryside with chef Shinobu Namae of the Michelin-starred L'Effervescence.

A stop in Florence offers lessons with a fifth-generation Tuscan butcher; in Paris, it's a Champagne-and-oyster-fuelled cruise across the Seine; and in Copenhagen, Redzepi will give travellers behind-the-scene access to his legendary kitchen.

Throughout the journey, passengers will travel aboard TCS's private 52-seat Boeing 757 and stay in Four Seasons hotels and resorts. (tcsworldtravel.com) - Sandra Ramani The African safari experts at andBeyond are taking to the skies with a host of new private-jet journeys. The Johannesburg-based outfitter has unveiled 15- and 19-day itineraries, priced from $US75,000 (about $A97,900) per person for the 15-day trip; the 19-day trip starts at $US116,500 (about $A152,000) per person, that will take travellers to some of Africa's most iconic safari destinations, including Botswana's Okavango Delta (where guests can participate in the andBeyond's Rhinos Without Borders initiative by tracking rhino via helicopter) and Tanzania's Serengeti National Park (where travellers will be led by Jonathan Scott of BBC's award-winning _Big Cat Diaries_). In the air, passengers will enjoy the comfort of a reconfigured Embraer 145 and the Pilatus PC12; on the ground, they'll stay in andBeyond's luxury camps and other A-list properties. Scheduled itineraries accommodating up to 12 guests per departure are set to take place this year in May, June, September, and October. Travelers can also book bespoke expeditions for custom African adventures. (andbeyond.com) - Jackie Caradonio Après in the Air with Fairmont Hotels and Air Canada

Oh, Canada! Celebrate True North's 150th birthday this year with an over-the-top experience from Fairmont Hotels & Resorts and Air Canada. The Après in the Air package transforms Air Canada Jetz's all-business-class Airbus A319 into a chalet in the sky with fuzzy faux lambskin throws and live in-air entertainment. On the ground, travellers stay in Fairmont properties in Ottawa, Montebello, and Mont-Tremblant, enjoying wintertime experiences like ice-skating, skiing, and dog sledding. The customisable journeys are available through the end of 2017, and are priced from $US300,000 (about $A391,400) for up to 58 travellers. (fairmont.com) - Susan B. Barnes Discover Your Italy's Grand Tour of Italy by Private Jet

Discover Your Italy is taking Italophiles on the whirlwind trip of their dreams with its 15-day Grand Tour of Italy by Private Jet experience. Priced from around $US17,000 (about $A22,200) per person, the fast-paced itinerary will have travellers cruising Italy's Lake Como at sunset one day, and touring the Verona Arena the next. Additional stops include the Amalfi Coast, Tuscany, Sardinia, and Sicily. Experiences at every stop are customisable, regardless of whether you fancy a gourmet lunch in Padua, a boat ride in the famed Grotto, or a tour of the Mt. Etna volcano. (discoveryouritaly.com) - Susan B. Barnes