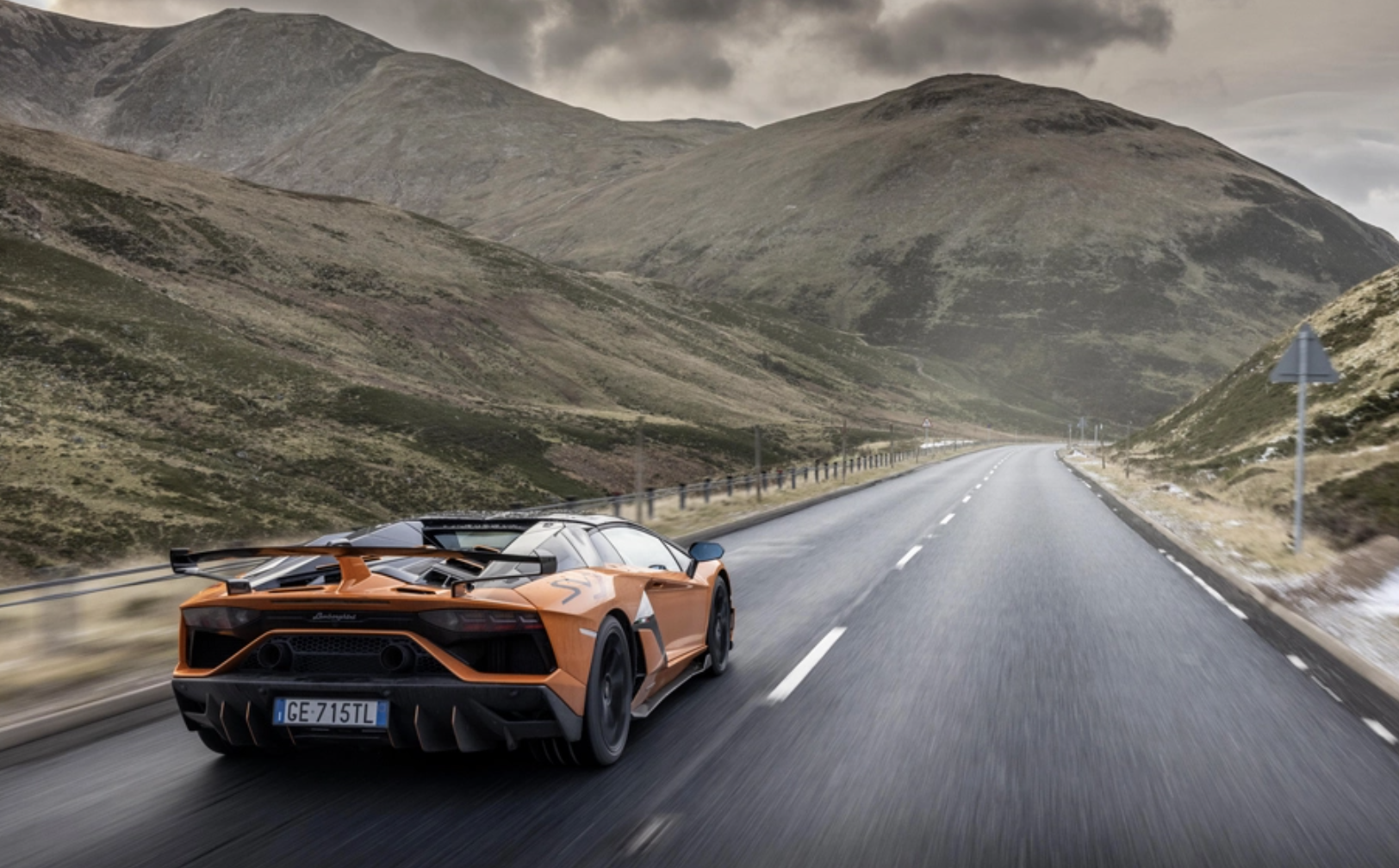 We Took A Road Trip With 11 Lamborghinis

The convoy of Raging Bulls underwent a side-by-side power-train comparison in the Scottish Highlands.

“Now is the time to celebrate the internal combustion engine.” So proclaims Francesco Cresci, Lamborghini’s regional director for Europe, the Middle East and Africa. The clock is ticking until all of Sant’Agata Bolognese’s supercars go hybrid, led by the next Aventador in 2023, followed by the first Lamborghini EV, which, according to Cresci, will be “closer to 2030.”

Before we enter this brave new world, Cresci promises two new models for next year (we predict a Huracán STO Spyder and a firmer, faster Urus) and hints at a hypercar to succeed the sold-out Countach LPI 800-4. Our celebration, however, starts even sooner: with the 11 Lamborghinis waiting outside. Tomorrow, we depart Edinburgh and spear north into the Scottish Highlands in an assortment of Raging Bulls.

Shortly after dawn, the winter chill is shattered by a fanfare of snorting V-8s, yelping V-10s and bellowing V-12s. Lined up like multi-coloured M&Ms, the stable includes three examples of the Urus SUV, six Huracáns and two Aventadors. The grand total: 108 cylinders and over 5300kW. And not an electric motor in sight.

I jump into the Urus first, keen to save the high-performance coupes for the mountain roads ahead. In Strada mode, its softened suspension and muted exhausts are well suited to Edinburgh rush-hour. I’m also grateful for its heated seats (set to scorching) and high driving position, which helps me witness the reactions of bleary-eyed commuters to our cavalcade. In this company, a bright yellow Urus feels almost inconspicuous . . . almost. 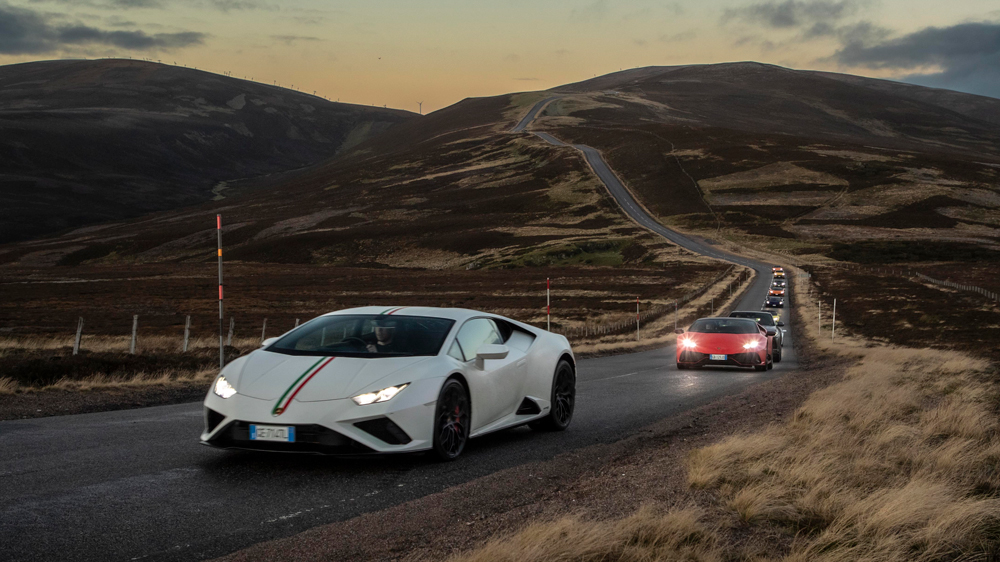 The three examples of the Urus, six Huracáns and two Aventadors comprise a total of 108 cylinders and 7,200 hp. Photo by Charlie Magee, courtesy of Automobili Lamborghini S.p.A.

As we head for the hills, my thoughts turn to Convoy, the epochal Lamborghini road-trip story, written by Mel Nichols and published in CAR magazine in 1977. Its oft-quoted opening lines read: “It had the unreal quality of a dream. That strange hyper-cleanliness, that dazzling intensity of colour, that haunting feeling of being suspended in time, and even in motion; sitting there with the speedo reading in excess of 160mph (250km/h) and two more gold Lamborghinis drifting along ahead.” Today, a drive on the A9 road is limited to 80km/h and monitored by speed cameras, but a convoy of Lamborghinis still feels uniquely exhilarating.

After a brief coffee stop in Pitlochry, I swap into the car at the opposite end of the spectrum: the Aventador SVJ Roadster (opening image). Parked next to a “stock” Aventador S, the SVJ Roadster looks almost cartoonish with its ravenous air scoops and hooped spoiler, like a supercar sketched by a seven-year-old. Still, a Nürburgring lap-record of 6 minutes, 45 seconds for the SVJ coupe (since beaten by the Mercedes-AMG GT Black Series and Manthey Porsche 991 GT2 RS) is testament to the effectiveness of its aggressive air management: A 574kW, 6.5-litre V-12 should be pretty effective, too. 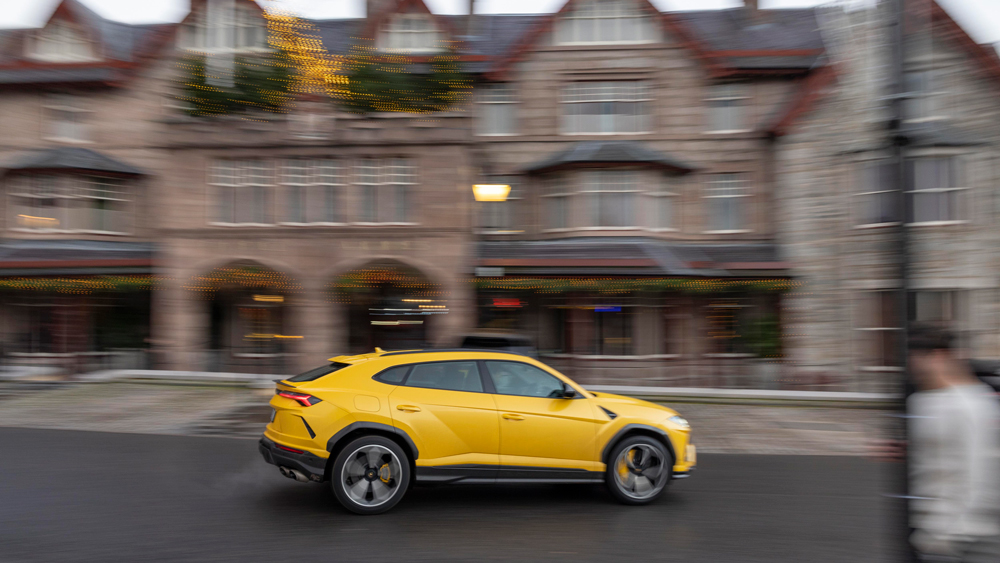 The 484kW Lamborghini Urus heads out on the town. Photo by Charlie Magee, courtesy of Automobili Lamborghini S.p.A.

From the get-go, the Aventador does its best to intimidate you. It’s hugely wide, while over-the-shoulder visibility is non-existent and the automated manual gearbox lurches drunkenly at slow speeds. Its carbon-clad interior also looks old, the dashboard blunderbussed with buttons, the CD player (remember those?) wedged next to your left knee. Sitting low, with legs outstretched and the windshield miles from your face, you feel as if strapped to a rocket.

Within a few miles, though, none of that matters. The SVJ gets better the faster you go, and it goes so very, very fast. Its front end feels absolutely nailed down, biting into corners before four-wheel-drive traction spits you out the other side. And its engine is utterly outrageous. Where the 484kW V-8 in the Urus majors in muscular torque, this old-school action hero relishes high revs. With the transmission in Corsa mode, every full-bore upshift thumps you in the back, the tailpipes booming like heavy artillery. Perhaps I didn’t need that coffee after all. 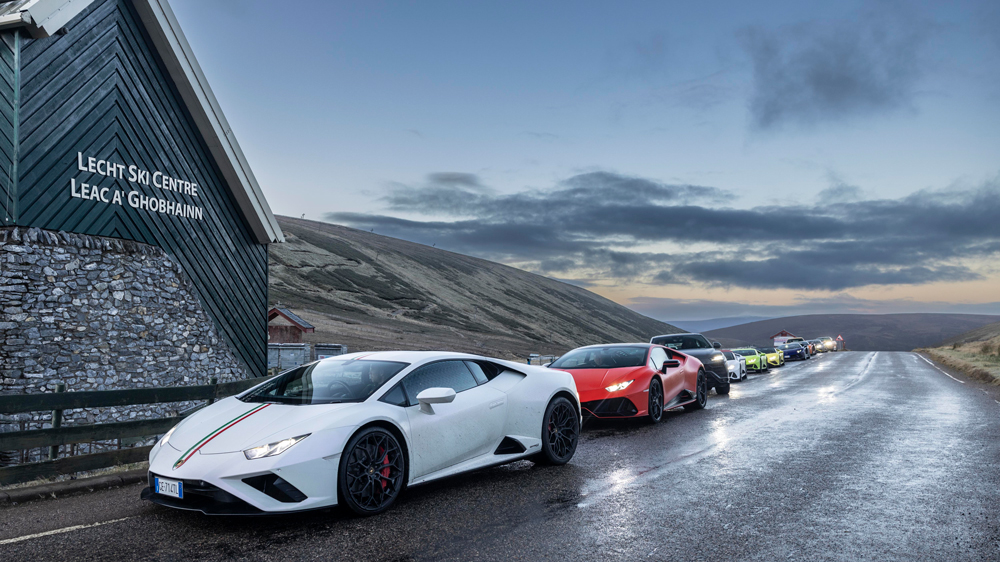 The winter chill is shattered by a fanfare of snorting V-8s, yelping V-10s and bellowing V-12s. Photo by Charlie Magee, courtesy of Automobili Lamborghini S.p.A.

We stop at Glenlivet distillery for lunch (no whiskey consumed, of course), where I grab the coveted keys to the Huracán STO. On the surface, this latest Lamborghini looks like a baby SVJ, a track-focused supercar with wings and war paint to match. In reality, it’s very different, with a split personality that could fascinate Freud. However, while it packs a 477kW, 5.2-litre V-10, the vehicle features a Miura-style hinged front clamshell that only allows space for a crash helmet, so my bags have to ride separately.

On writhing roads carved into the landscape, the STO feels instantly at home. Its fixed-ratio steering overflows with tactility, while its magnetic dampers and huge Brembo CCM-R brakes are ruthlessly fit for purpose. The operatic howl of the Aventador is replaced by a buzz-saw snarl, strident at first, then savagely intense near the 8,500 rpm redline. The twin-clutch gearbox, precognitively quick and precise, is a revelation. 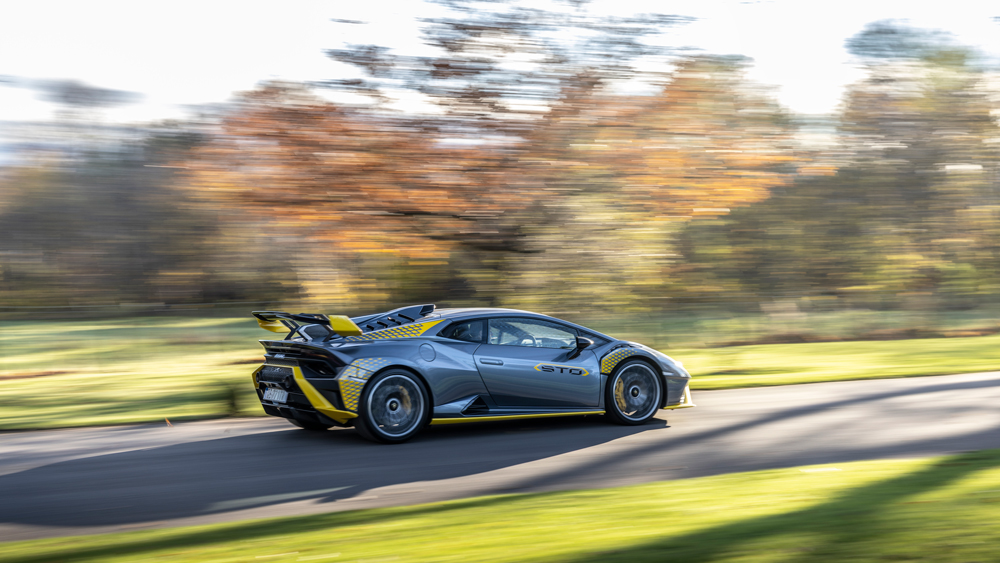 As we trundle into the town of Braemar for our second overnight stay, the hardcore Huracán reveals the other side to its personality. Woeful rearward vision aside (blame those classic Lamborghini louvres), it’s actually very amenable to drive, without the stubbornness or fear factor of the Aventador. Think of it as a 911 GT3 with an even more incredible engine. The order book for an STO already stretches into 2023 and, frankly, it’s worth the wait. Sitting by the fire and sipping a dram of locally sourced single malt, it feels like my road-trip has already peaked. 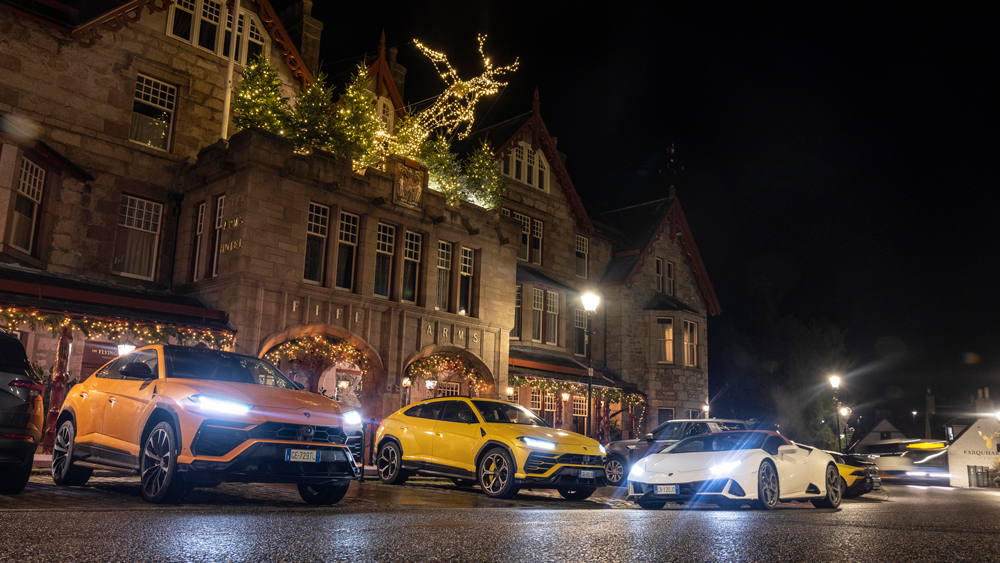 Raging Bulls retiring for the night at the Fife Arms in Braemar. Photo by Charlie Magee, courtesy of Automobili Lamborghini S.p.A.

Or perhaps not. The following morning, I’m assigned a Huracán RWD Spyder for the blast up to Glenshee ski resort. There is snow on the peaks and I’ve forgotten my woolly hat, but can’t resist retracting the roof. What follows is one of the most invigorating, life-affirming drives of my career. The cold-air rush, the stunning scenery, the incredible road, a balletic chassis and scarcely enough grip: it all comes together in a few perfect kilometres

Most of all, though, I’ll remember the engine. The 454kW RWD gives away 22kW to the four-wheel-drive Huracán Evo and STO, but feels every bit as immersive. Wringing out the V-10 through the gears delivers a full-bodied growl that seemingly becomes a physical presence, swelling through my ribcage and ricocheting off the rocks. Bereft of any SUV compromise or race-car pretension, this back-to-basics model distils what makes Lamborghinis special—and the internal combustion engine is the very heart of it. 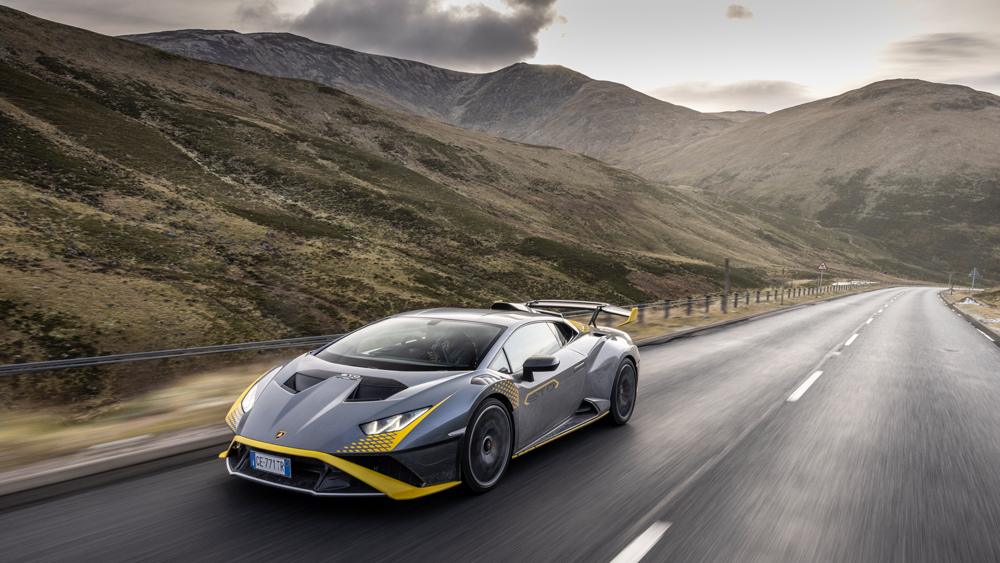 Cresci is aware of the challenges ahead: “Sound is one of the main characteristics of a Lamborghini. You can make EVs sound different, of course, but we want to retain the emotion of driving.” Yet there may be an alternative in low-carbon synthetic fuels, a technology Lamborghini is researching alongside other brands—notably Porsche—within the Volkswagen Group. “We’ll see if there’s a way to keep combustion engines alive,” he says. I certainly hope so.