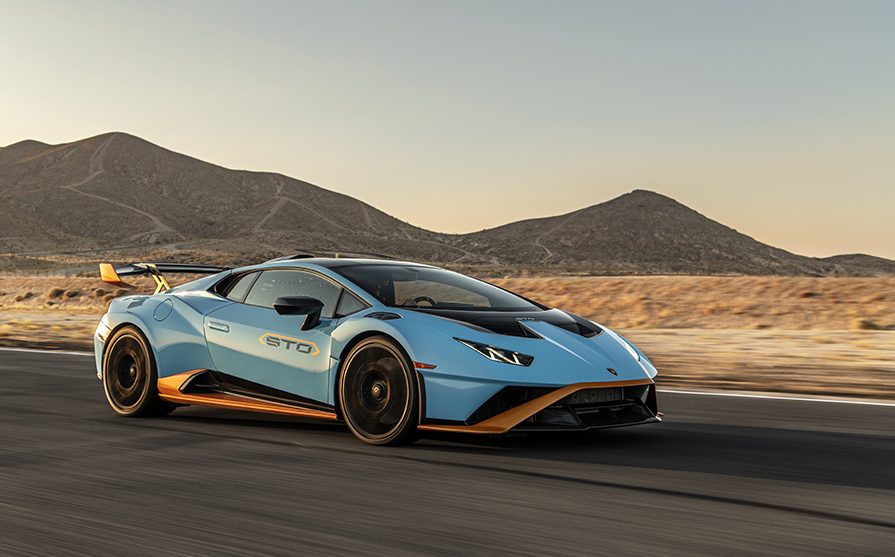 The racer has greater agility than any other raging bull in the Huracán stable, bar none.

Racing great Parnelli Jones is often attributed to the quip that “if you’re in control, you’re not going fast enough.” That notion is now being challenged by Automobili Lamborghini’s 477kW  Huracán Super Trofeo Omologata (STO), a racecar-for-the-street homologation that allows drivers to push the performance envelope without becoming unglued.

Upon entering the STO’s snug, angular cockpit at Willow Springs International Raceway in Rosamond, Calif., there’s little inside that hints at the differences between this rear-wheel-drive variant and the automaker’s previous benchmark for athleticism, the all-wheel-drive Huracán Performante. Yet attacking Castrol Corner, punching onto the subsequent incline and managing traction around the aptly named Rabbit’s Ear bend, the 1339kg coupe reveals its frenetic combination of explosiveness and gymnastic precision—like Simone Biles performing her trademark physics-defying feats while draped in aluminium and carbon fibre. With a more finely tuned version of the Performante’s 5.2-litre, naturally aspirated V-10 engine, this is the model line’s most powerful rear-wheel-drive iteration, and it has greater agility than any other raging bull in the Huracán stable, bar none.

Starting at $596,000, the STO is based on the Super Trofeo Evo and Huracán GT3 Evo racecars, the latter of which holds multiple overall victories at the 24 Hours of Daytona and 12 Hours of Sebring. That pedigree is partly responsible for a 37 per cent improvement in aerodynamic efficiency compared to the Performante, aided by a rear shark fin for directional stability and an adjustable split wing that can generate up to 420kg of downforce. Being 75 per cent carbon fibre, including the clamshell-style “cofango” comprising the hood and front bumper, the STO is also nearly 43kg lighter than its sibling.

But the car also has brains to go along with its brute force, with its LDVI super processor precisely managing power delivery based on a host of inputs from the car, the driver and road conditions alike. Through the circuit’s S-turns, a combination of rear-wheel steering, Bridgestone Potenza rubber (wrapped around lightweight magnesium rims) and the rigid MagneRide 2.0 suspension helps hold the racing line and nimbly transition the vehicle into a full-tilt descent. When it comes time to scrub all that prodigious speed, Formula 1–derived carbon-ceramic racing brakes, the strongest used in the marque’s history, can haul the car down from 200km/h to a dead stop in just 110 metres. 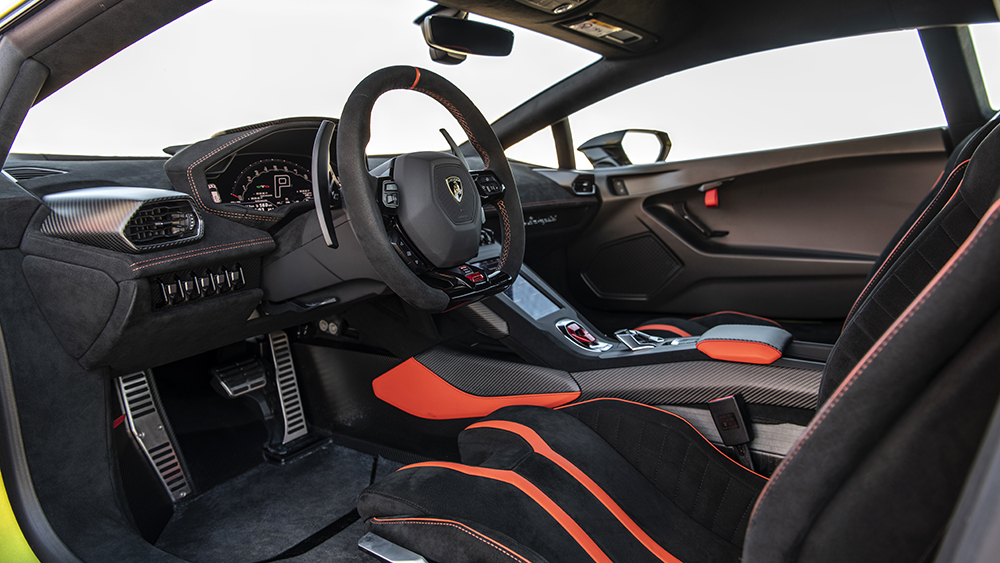 Less impressive is the seven-speed dual-clutch transmission, but only in the standard STO setting for the street, one of three modes that also include competition-focused Trofeo and the Pioggia, for rain. Hammer on the gas in automatic and you’ll experience some delay—not something one expects to find in a car with a naturally aspirated engine, or in any Lamborghini—though switching to the manually operated paddle shifters (the only option in Trofeo mode) yields brisk, quick shifts along with a reassuringly linear throttle response. The car, which tears from zero to 100km/h in 3.0 seconds on its way to a top speed of 309km/h, inhales straightaways, its roof scoop force-feeding air into that voracious, gas-burning mill, among the last of its kind before Lambo goes completely hybrid in 2024.

Unlike the Huracán Evo, the stiffer STO doesn’t pretend to be a daily driver; it’s best reserved for the track, where, as Lamborghini’s chief technical officer Maurizio Reggiani points out between laps, it’s the Huracán line’s “best car in terms of trust.” Which means, with all due respect to Mr. Jones, you can both be in control and find yourself going plenty fast indeed.