A handful of the marque’s B.A.T. cars from the 1950s are being presented by RM Sotheby’s.

The 1950s were exciting times. Reported sightings of alien spacecraft at Roswell, N.M., were a foreshadowing of three outrageous vehicles that came to earth between 1953 and 1955. Confirmed by copious publicity photographs and thousands of witnesses, the automotive world was taken by storm when a tiny finned machine by Alfa Romeo was unveiled at the Turin Motor Show for three consecutive years beginning in 1953. Today, they are among the most important show cars ever created.

Italian postwar automotive-design studios were a crucible of fearless—and sometimes farfetched—ideas that ultimately informed every aspect of industrial design worldwide. While Detroit and its high-profile personalities were often heralded as the cutting-edge tastemakers, diligent inquiry suggests that certain individuals from the Mediterranean peninsula were responsible for influencing the look of everything from Cadillacs to kitchen appliances. No one of his era was more forward-thinking than Franco Scaglione, a young designer in the employ of Carrozzeria Bertone, the Italian coachbuilder whose fortunes immediately following the war were closely tied to automaker Alfa Romeo. 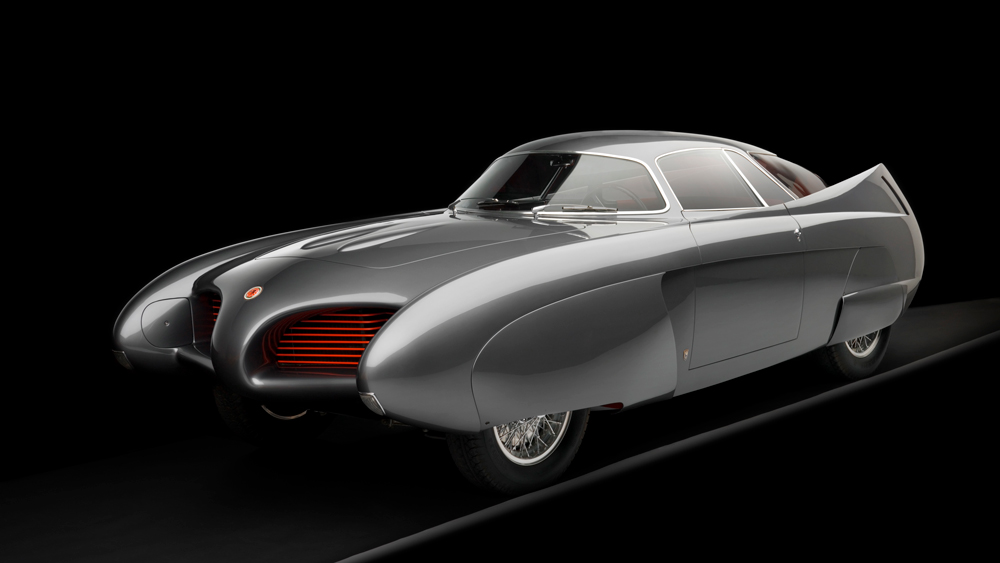 Alfa Romeo’s 1900 Sprint mechanicals underpinned the one-off bodywork of Bertone’s landmark styling exercises, called Berlinetta Aerodinamica Tecnica, from which is derived the acronym B.A.T. The goal was to achieve maximum aerodynamic efficiency by means of a reduced frontal section, faired-in wheels, a wraparound greenhouse and variations on the signature upswept fins that make the B.A.T. name so apposite.

Naturally, opinion is divided as to which of the three examples is the most successful design; interpretation of success depends on whether the observer is attracted to a car that more resembles a manta ray than a parrotfish, or something in between. While it is generally acknowledged that the first B.A.T. made the greatest impact, other opinions suggest that the middle car is what inspired Detroit’s design mavens to create the be-finned monsters that followed a half-decade on. 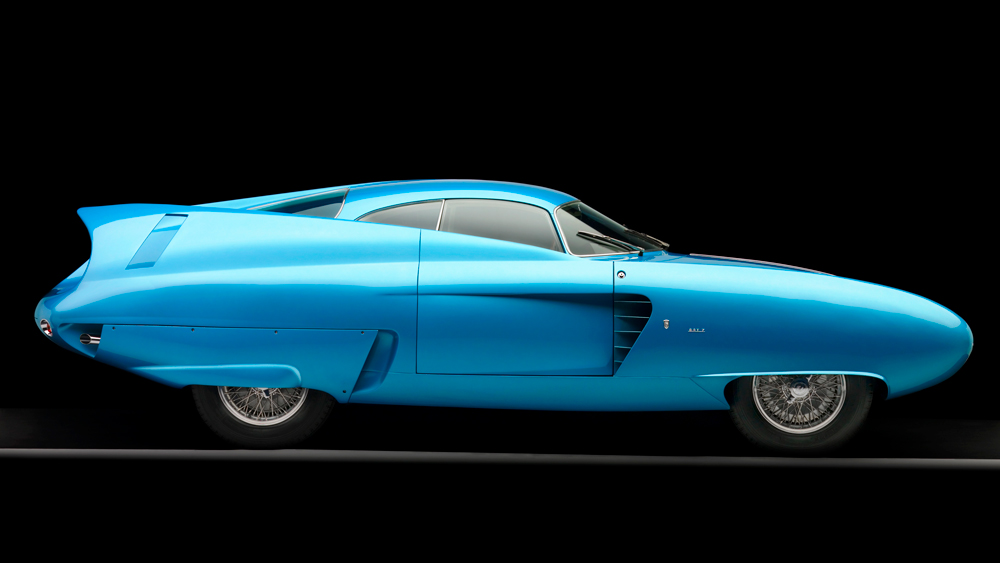 The most understated of the three—in relative terms—is B.A.T. 9, with vestigial fins, front-end treatment and profile that glimpse the shape of things to come in series-production automobiles. Each show car has multiple vantage points from which Scaglione’s genius is magnified, and each is a masterpiece in its own right, independent of its siblings. Yet seeing the three together supports the Aristotelian maxim that the whole is, indeed, greater than the sum of the parts. 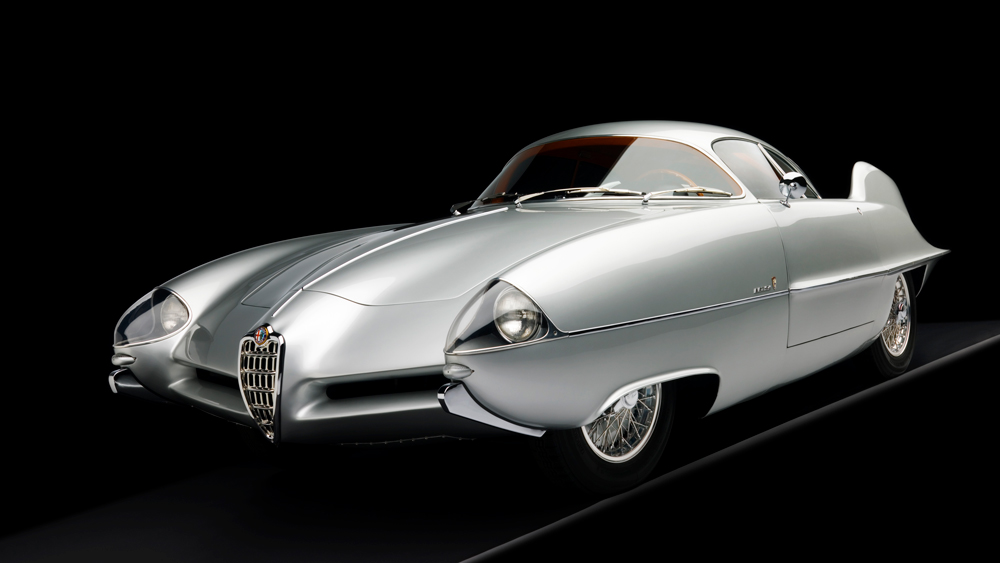 But seeing them is not the same as spending time behind the wheel, and driving each B.A.T. is an experience to be savoured. The pilot feels much as if ensconced in an earth-bound spacecraft, so theatrical and exaggerated is the view through the wildly curved side screens and ever-trailing fins visible through the bifurcated backlight. The inline-four DOHC engines, which produce somewhere north—or south a few degrees—of 67kW, adequately power the lightweight, 1088kg vehicles without finicky fanfare. To see the three cars clustered in quiet repose is delightful; to see any of them perambulating under their own power is a remarkable sight, recalling a giant pre-Cambrian sea mollusc or a ghostly skate gliding—not on a silent undercurrent—but on four thin wire wheels. In fact, it is primarily the narrow tires that date these otherwise futuristic creations. 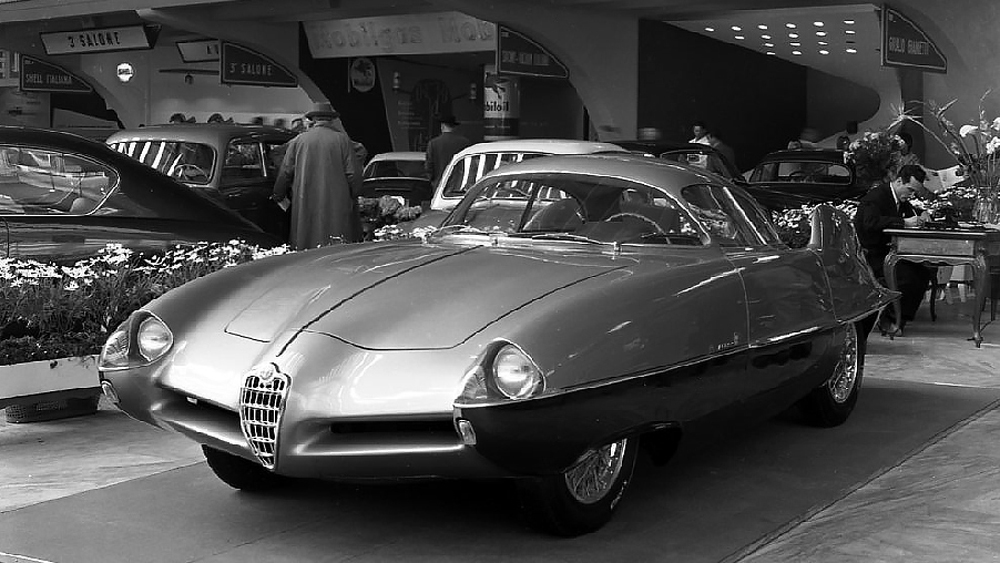 The Alfa Romeo B.A.T. 9 at the 1955 Turin Automobile Salon. Photo: Courtesy of the Klemantaski Collection.

The B.A.T. 5, B.A.T. 7 and B.A.T 9 are colossal design statements; all the more so when they can be appreciated in one another’s company. The 2005 Pebble Beach Concours d’Elegance honoured the Alfa Romeo marque, and a highlight was to see all of the B.A.T.s reunited for the first time since their appearance there in 1989. Restored to their original specifications and appearance, each car is, today, sorted and roadworthy. They emerge following a quiet 15-year stay in a private collection, to be offered as a group in the forthcoming RM Sotheby’s Contemporary Art Evening Sale, live-streamed from its New York headquarters on October 28, 2020.

Turning as many heads when encountered on 21st-century roads as they did on the show stand nearly 70 years ago, they are offered as a set with an estimate of $19 to $28 million.