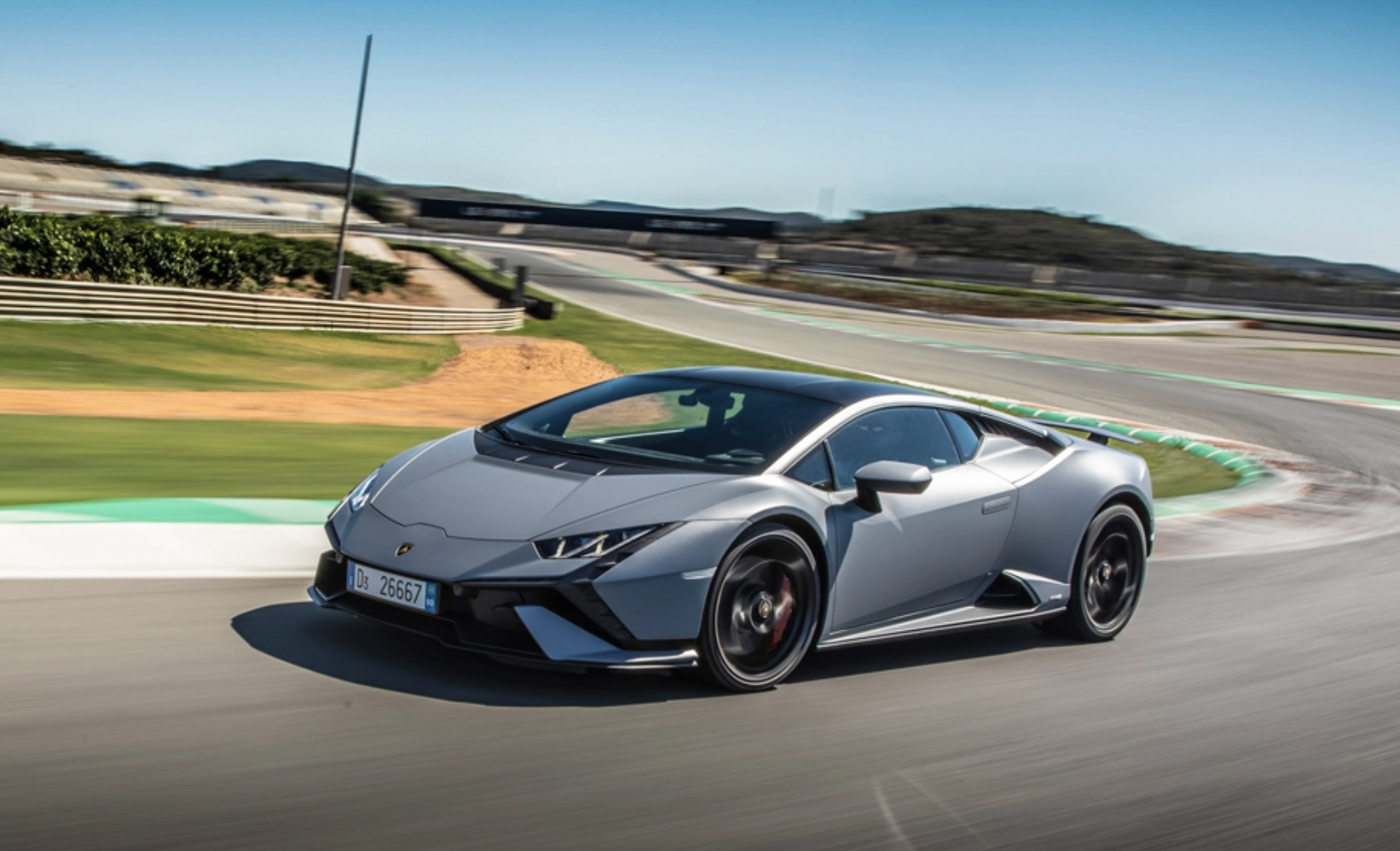 The latest variant in the Raging Bull’s line impressively fills the gaps between its EVO and STO siblings.

Every generation of supercar faces a twilight that can end in one of two ways: extinction or reinvention. Eight years ago, the V-10-powered Huracàn debuted as an entry-level coupe for Lamborghini, which eventually saved the Italian brand from irrelevance by selling more examples than every model prior since the marque’s founding in 1963. As the Huracán approaches its own fin de siècle, Lamborghini offers the Tecnica as a penultimate take on the snarling supercar (yes, there will be one more Huracàn down the road) that helped reinvent the Sant’Agata-based automaker.

Lamborghini has promised a fully hybridized lineup by 2024, but the Tecnica is pure internal combustion. Spoiler alert: after track time with the car at Circuit Ricardo Tormo and the roads that ramble through its hilly surroundings in Valencia, Spain, we’re pleased to report that it will be a happy ending for Lamborghini’s octane-powered era. 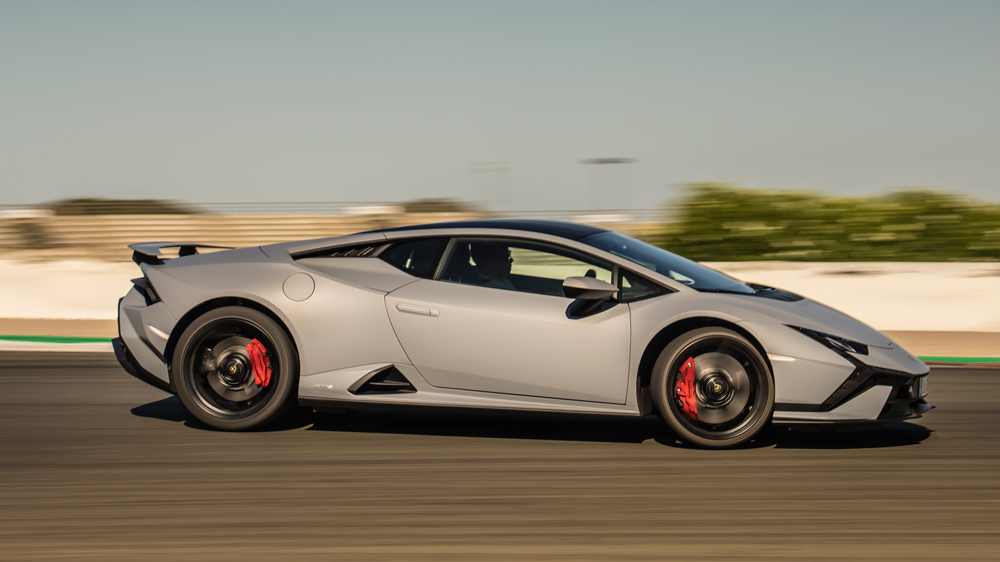 Bisecting the more workaday Huracàn EVO and the track-focused STO, the Tecnica borrows the latter’s 470kW engine while easing up on its actively managed downforce and stiff suspension, enabling a more accessible skillset while achieving a higher top speed of 325km/h. Lamborghini claims improved exhaust notes at higher rpms, but the furious ten-cylinder was never wanting in the sonic department. This bad boy has lungs, with a vocal signature that ranges from thrummy bass at idle to searing bellow at the top of its 8,200 rpm rev range. 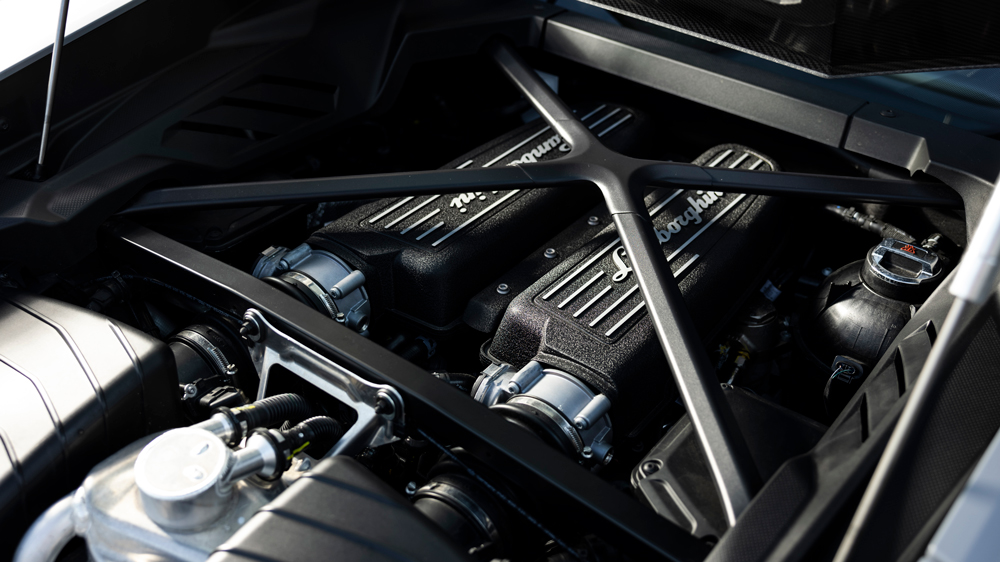 Whatever visual extroversion is sacrificed from the STO’s huge wing and sharp-edged bodywork is tempered by geometric touches, like the “ypsilon” accents against the edges of the headlamps. The slots work with dedicated ducts that help keep the brakes cooler and longer lasting. Interestingly, designer Manuele Amprimo says that the Tecnica’s rear shoulders were trimmed down in order to visually emphasize the model’s rear-wheel-drive setup. Weight-saving measures trim 10kgs compared to the EVO model, while a recalibrated four-wheel-steering system is tailored for the model’s rear-drive configuration. Appropriately, the 5.2-litre V-10 engine is celebrated beneath a faceted window panel, unlike the race-ready STO’s carbon-fibre rear section. 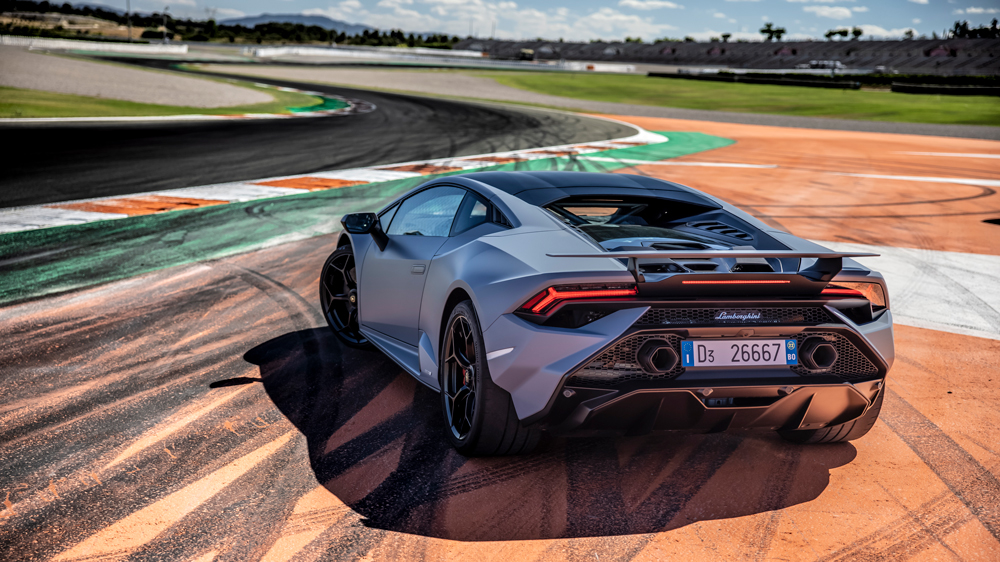 The Tecnica’s rear shoulders were trimmed down in order to visually emphasize the model’s rear-wheel-drive setup. Wolfango Spaccarelli, courtesy of Automobili Lamborghini S.p.A.

“This is not a facelift,” insists Rouven Mohr, Lamborghini’s new chief technical officer, “this is much closer to the STO.” I take those words to heart as I’m strapped into a Tecnica in pit lane at the 25-turn circuit, ready to chase an STO piloted by a pro racer. As with all Huracàns, the start button is protected by a hinged, missile-launcher-style shield. But this being my umpteenth Huracán rodeo, I simply reach through the gap in the shield to depress the button, igniting all 10 cylinders into a reassuringly mechanical hum.

Drive modes are activated via a toggle on the steering wheel, and follow the Huracán’s all-in-one theme of encapsulating controls onto the flat-bottomed rim, offering a race theme that’s similar to that of the competition across the valley in Maranello. There may be slightly less tactile precision in this application, but rising through the revs and tapping the large aluminium paddles imparts a feeling of seriousness. Available carbon-fibre door cards from the STO heighten that impression, though there’s a certain in-the-know stealthiness to omitting the boy-racer bits. 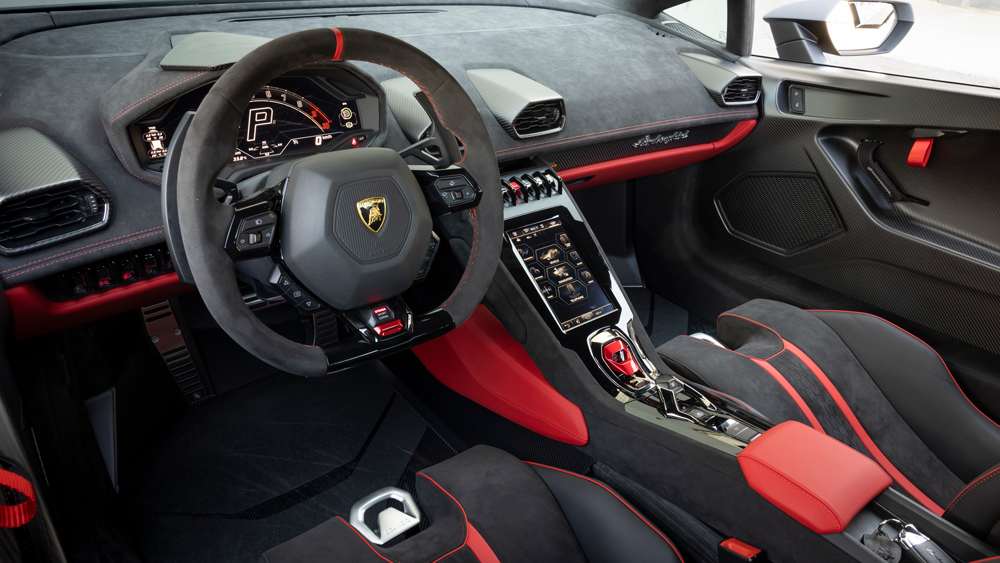 Drive modes are activated via a toggle on the steering wheel, and follow the Huracán’s all-in-one theme of encapsulating controls onto the flat-bottomed rim. Wolfango Spaccarelli, courtesy of Automobili Lamborghini S.p.A.

Whatever go-fast pretentions this Lamborghini puts forth with its styling, it backs up in capability. Smash the right pedal, and Tecnica lurches forward in a howling, long-winded climb through each of the 7 gears. Lamborghini’s predetermined playbook dictates that the behaviours of each performance feature—suspension, stability control, steering, shifting and the like are constrained by each drive mode and cannot be individually customised.

Strada (road) is the mild setup for lolling about when you’d rather be daydreaming about sweets than speed: shifts come slow and early, and the ride quality is accommodating. Here on the track, we’re focused on Sport and Corsa (race) modes, which offer more animated, entertaining dynamics or lap time–focused performance, respectively. There’s a bit of a devil’s deal involved with each setting. 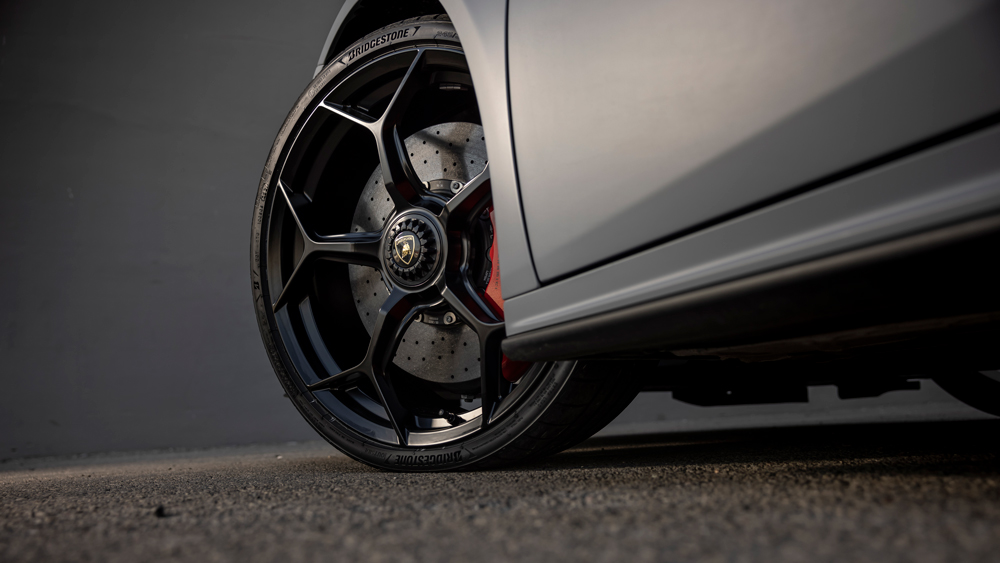 Need the quickest way around the track? You’ll want Corsa—but you can’t let the brilliant transmission help with gear shifts, because the mode is manual only. I love tapping the paddles just as much as the next lead foot, but the 8,200 rpm engine revs so quickly that it’s taxing to focus so much attention on the perfect millisecond for shifting when you’re also focused on timing your threshold braking, turn-in points, mid-corner adjustments and exits.

Sport mode offers a different experience, with slightly softer suspension and more lenient stability control that enables the charismatic V-10 to send the rear wheels spinning. Let’s say, however, that you want tighter suspension but more free-spirited traction control, or automatic shifting along with track time–focused stability control. Well, you’re out of luck. Lamborghini’s so-called EGO mode, which enables individually customized drive modes, was introduced in the Aventador S and migrated into the Urus. Curiously, it’s not available in the Tecnica. 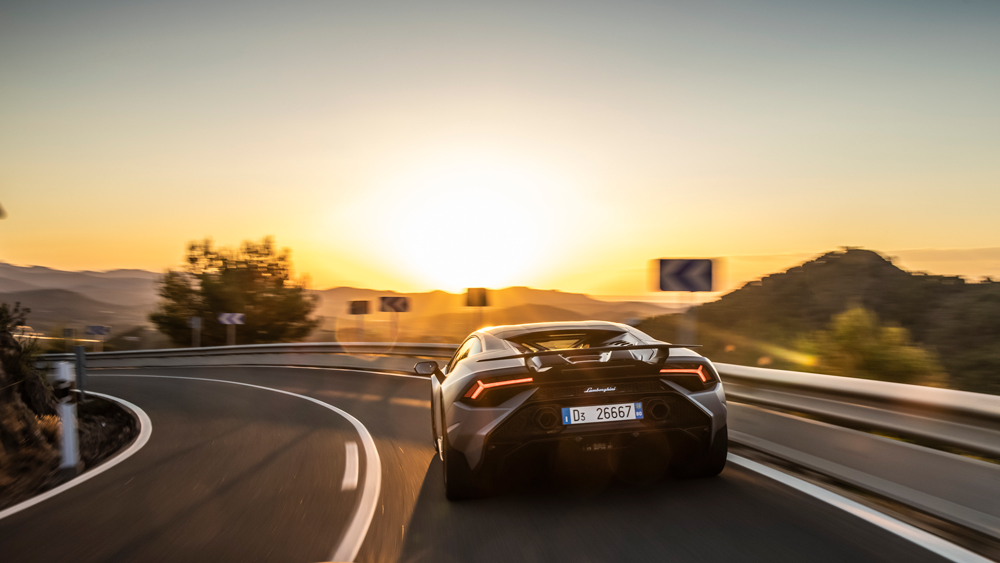 This Raging Bull has a vocal signature that ranges from thrummy bass to searing bellow. Wolfango Spaccarelli, courtesy of Automobili Lamborghini S.p.A.

Regardless of the three-sizes-fit-all approach, the Tecnica makes quick work of the race circuit with its outstanding accuracy, exceptional grip and deft management of power and finesse. The Bridgestone Potenza Race rubber seems eerily surefooted until the reins are loosened on the stability-control system, which creates an almost disconcerting sensation of tail sliding as the angry engine sends torque to the rear wheels. But modulated with the proper balance of aggression and restraint, the Tecnica proves itself an exceptional dance partner, feeling potent yet just irascible enough to bring an edge to the racetrack proceedings.

What sets the Tecnica apart from the lean, mean STO is its on-road feel. Unlike the dialed-to-11 STO, the Tecnica brings more breadth to the table, not always feeling manic or wound up. In the supercar spectrum, this particular model lineup doesn’t have quite the extremes of, say, McLaren’s LT offerings, whose abusive rides and razor-sharp responses nearly make them caricatures of race cars. In that regard, the Tecnica can be easy to drive in its Strada setting, or satisfyingly aggressive in Sport and Corsa. 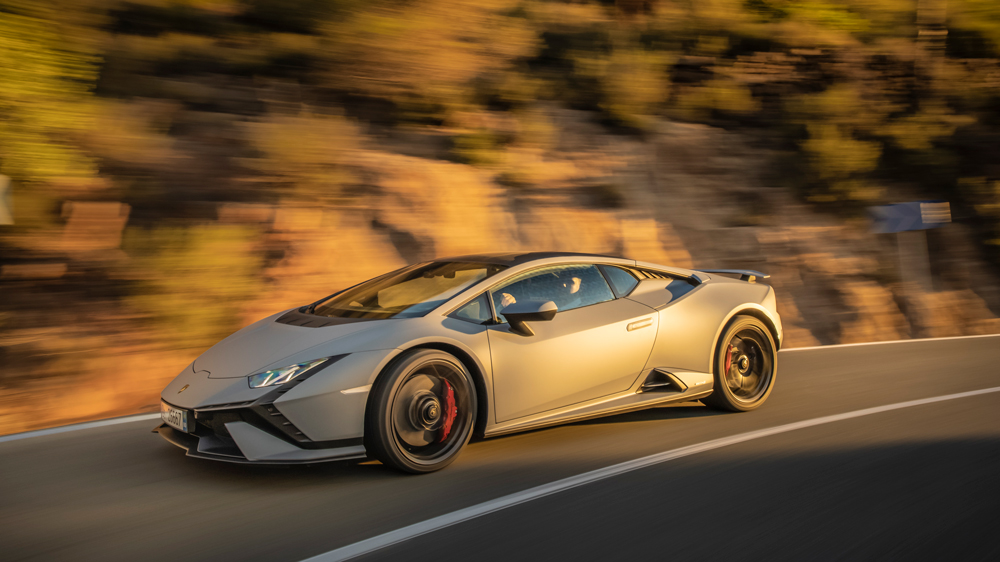 Whatever go-fast pretentions this Lamborghini puts forth with its styling, it backs up in capability. Wolfango Spaccarelli, courtesy of Automobili Lamborghini S.p.A.

On the road, you’ll never know the depths of the Tecnica’s exceptional stopping capability provided by its carbon-ceramic brakes, or the wizardry of the vectoring systems that help the vehicle negotiate the complexities of a race circuit. But it’s also the elemental parts of this Huracán that appeal on such a simple level: The analog snarl of the power plant, the direct honesty of the chassis and the linearity of its responsiveness. The Lamborghini Huracán Tecnica’s ode to internal combustion purity is sung loud, strong and sweet. No matter how fabulous the next chapter, this one will be missed.