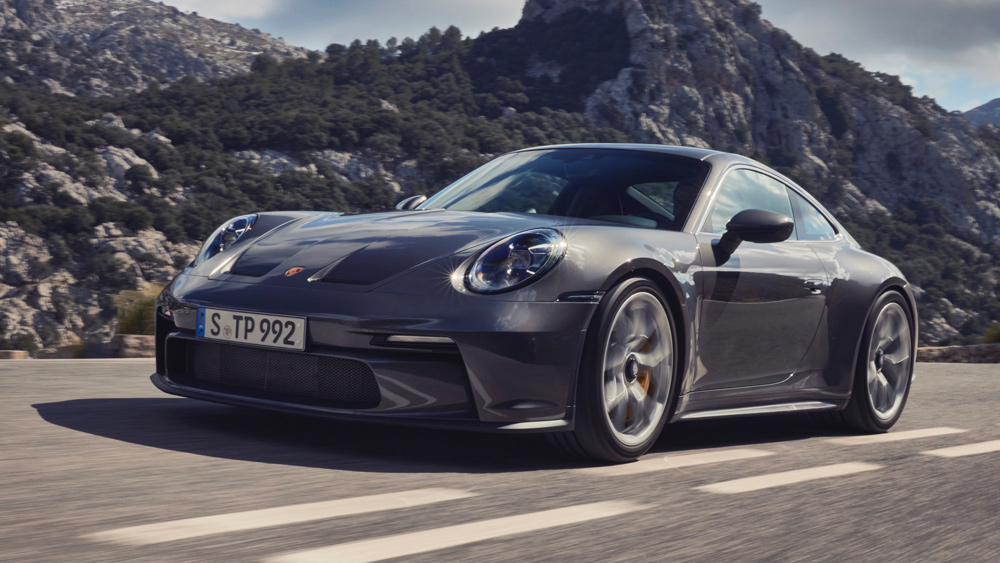 Originally an equipment variant for the iconic 1973 Porsche 911 Carrera RS, the German marque’s Touring Package was revived for the 991-generation 911 GT3 back in 2017 as a response to the fervour created by the 911 R. Secondhand prices for the latter, a limited-production model, had reached unprecedented levels of absurdity, and the trend soon began to attract opportunists who were more interested in making a buck than actually driving the thing. In an attempt to help stabilize the market, Porsche quickly assembled a similar package without a production cap.

For the 2022 model year, Porsche took the opportunity to consider what it wanted the GT3 Touring to be in greater detail, and it shows. Like the outgoing car, the new Touring is mechanically identical to the standard GT3 aside from the absence of the latter’s fixed rear wing. Downforce is instead created by the same retractable spoiler found on the 911 Carrera. 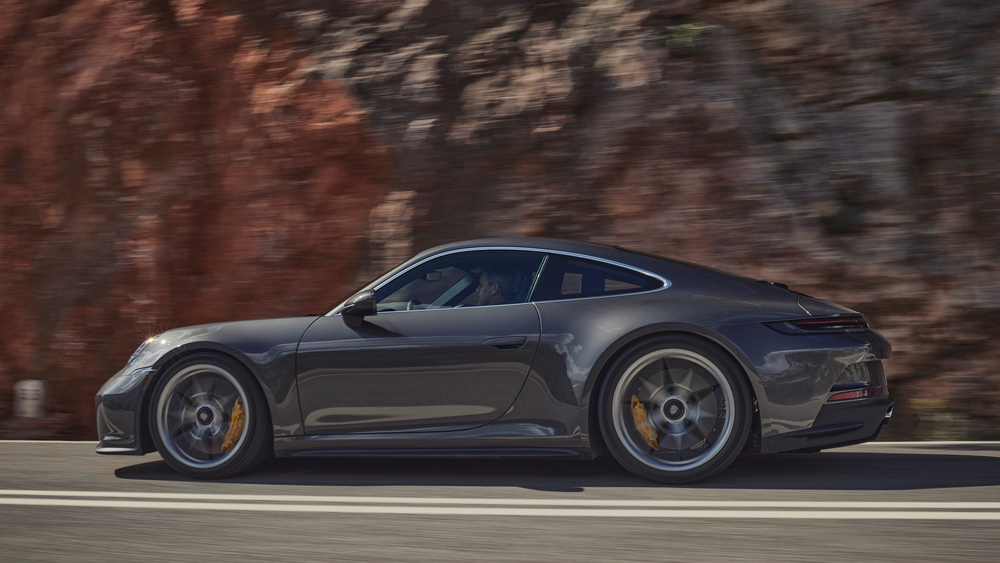 Driving a 2022 Porsche 911 GT3 with the Touring Package. Photo by Koslowski Photo, courtesy of Porsche AG.

The wing isn’t the sole difference between the two models, though. The side window trim and the tailpipes of the sport exhaust system are silver by default when you opt for the Touring package (Satin Black is available as an option), and while the standard GT3’s lower front fascia is black, it’s painted in the exterior colour on the Touring.

The GT3 Touring now also offers more cabin customization flexibility than the standard GT3. Whereas the fixed-wing car only has a few contrast stitching colours to choose from in order to dress up its black interior (outside of what’s available through the Porsche Exclusive Manufaktur program), would-be Touring buyers have more than a dozen choices for things like two-tone leather and fabric seat inserts.

The end result is a less severe look than the base 992 GT3, as it presents an aesthetic that more earnestly celebrates the 911’s elegant shape. Well, at lower speeds and when parked, anyway: Hop on the highway or take a spirited jaunt down your favourite canyon road and that aesthetic continuity is interrupted by the aforementioned retractable spoiler. It automatically pops up when travelling above 78km/h to create additional downforce, and we appreciate that it does so because the GT3 Touring is certainly capable of reaching speeds where it will benefit from additional aerodynamic stability. That’s also where the Touring package, from a conceptual standpoint, requires some mental gymnastics. 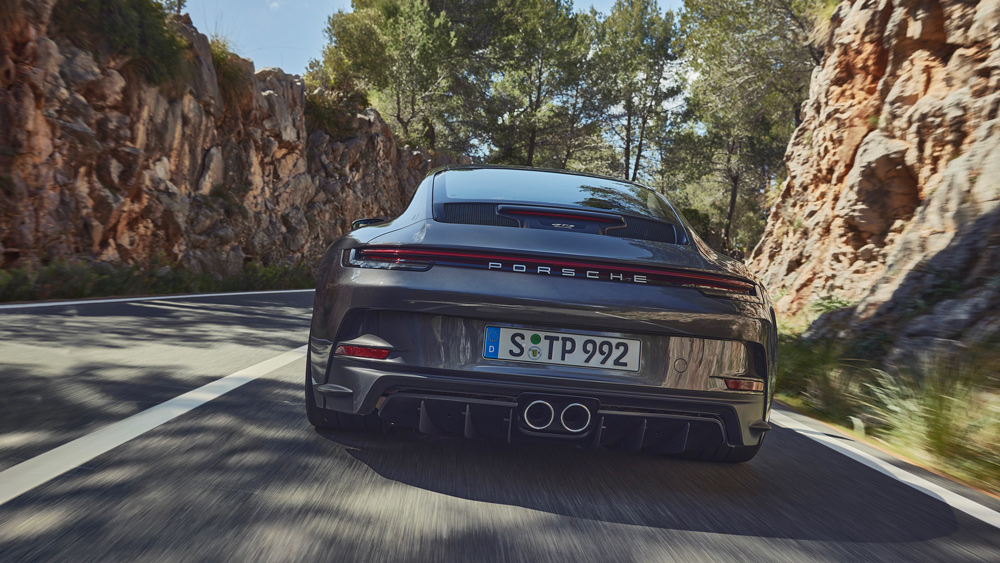 The new Touring is mechanically identical to the standard GT3 aside from the absence of the latter’s fixed rear wing. Photo by Koslowski Photo, courtesy of Porsche AG.

When the car’s power train includes a six-speed manual transmission (an option at no extra cost), like our tester, the 4.0-litre naturally aspirated flat-six’s 375kW and soaring 9,000 rpm redline will propel this two-seater well into triple-digit territory before you reach the top of third gear. The new, double-wishbone front suspension, rear-axle steering and ultra-sticky Michelin Pilot Sport Cup 2 tyres all offer pinpoint accuracy and make the optional fixed-back carbon bucket seats feel completely appropriate (and almost obligatory). And regardless of whether you go for the fixed wing or not, the 992 GT3 weighs in at a svelte 1418kg with the manual gearbox. That’s 103kg lighter than a base Carrera. 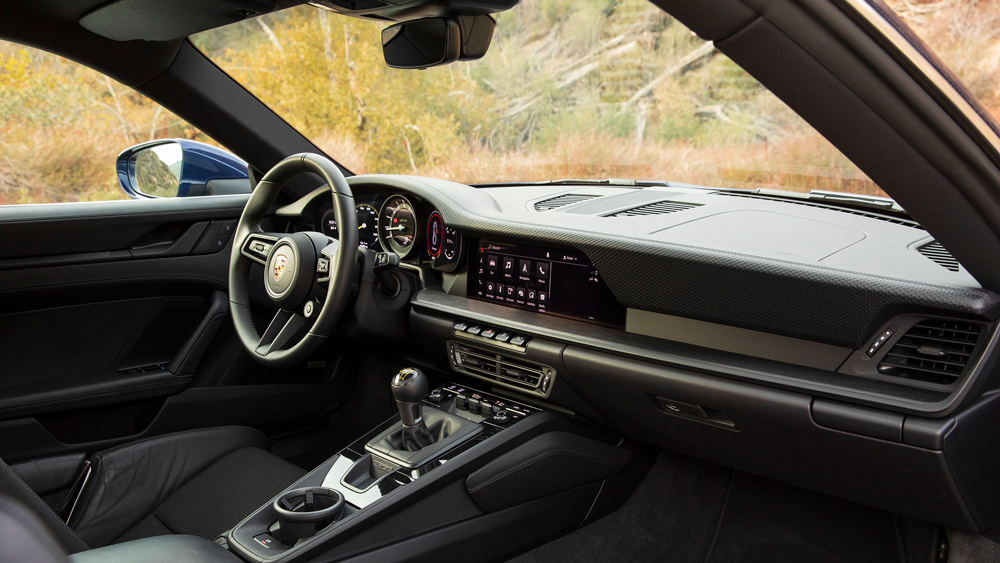 A six-speed manual transmission is an option that comes at no extra cost. Photo by Bradley Iger.

But Porsche is adamant that the GT3 Touring is more about providing an epic driving experience on your favourite back roads than it is about cutting fast lap times. The suspension compliance reinforces that assertion—both the GT3 and GT3 Touring provide a surprisingly agreeable ride quality on the less-than-perfect roadways of Los Angeles and when tearing around on the pockmarked pavement of the Angeles National Forest. We’re also more than happy to sacrifice a few tenths here and there in outright performance for the lovely mechanical feel and additional involvement that this manual gearbox provides.

Still, we couldn’t help but notice that the big Cup 2 tires send a fair amount of noise into the cabin, a trait which seems to contradict the touring aspect of this street-focused machine. We’d consider the relentless grip they provide to be more than worth the trouble, but we were a bit disappointed to discover that the optional Bose audio system is subpar, so it’s not a particularly effective way to drown out the din of the road during extended stints of normal driving. 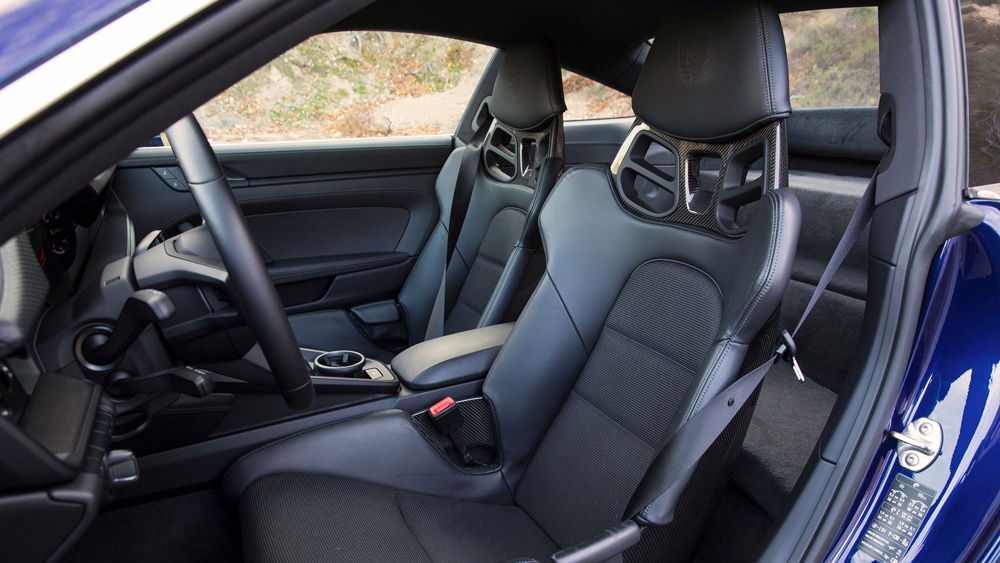 In an ideal world, every moment in a GT3 would be spent blasting down the greatest mountain roads on the planet. But this is a car which will convince you to make up excuses to get behind the wheel, and that desire for additional seat time will inevitably lead to situations where winding the flat-six out to redline and pulling over 1g in the corners just isn’t in the cards.

Blasphemous as it may seem, you might even find yourself preferring to listen to your favourite tunes on occasion. Porsche tells us that there hasn’t been a strong demand among GT buyers for the Burmester high-end audio system that’s available in other 911s like the Carrera and Turbo. As a result, it isn’t on the option sheet for the GT3 and GT3 Touring. It’s theoretically possible to outfit one with it through Porsche Exclusive Manufaktur, however, and we’d certainly try to capitalize on that if we were configuring our own example. 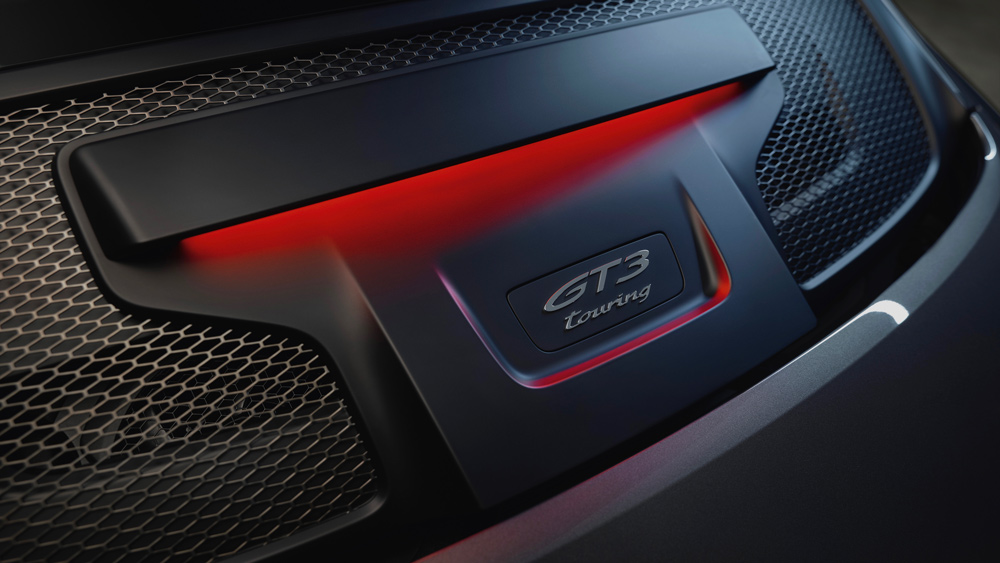 For the 2022 model year, Porsche took the opportunity to consider what it wanted the GT3 Touring to be in greater detail. Photo: Courtesy of Porsche AG.

There’s no question that the standard 992-generation GT3 is more visually aggressive than the outgoing car, and for those who’d prefer to fly under the radar, it’s understandable that this bolsters the case for the GT3 Touring. At the same time, it’s important to remember that the GT3 is a sports car that was developed alongside Porsche’s production-based race cars, and the compromises that are inherent to such a performance-focused design can often seem incongruous with the perceived mission of the Touring. Perhaps even more importantly, the GT3’s formidable dynamic limits and sheer pace that it’s capable of piling on in very short order, make a compelling argument for serious aero.

But we get it. Few sport cars can stir emotions quite like the 911 GT3 does, and at the end of the day, the heart wants what the heart wants. Fortunately for everyone involved, the GT3 delivers an absolutely glorious driving experience—whether it’s got a fixed wing on the back or not.