Have you heard about Zuffenhausen’s program to build the 911 or Cayenne of your dreams?

Jorge Carnicero is a blue man. Many of the numerous cars he owns are blue. His daily uniform is a blue button-up Ralph Lauren shirt, blue jeans and a blue baseball cap. And in June of 2018, as he was sitting in the Porsche Experience Centre in Atlanta, surrounded by colour samples, he was about to order yet another blue car.

“Jorge, your friend just ordered a car in that shade,” Yana Perros told him gently. “Let me play devil’s advocate.” The Porsche manager laid a new sample next to the brown interior leather that Carnicero liked. The painted tile, shaped like a 911 Carrera, was a vibrant green.

Carnicero, 68, is a horse breeder who divides his time between Kentucky and Florida, and he cheerily admits that his love of Porsche—the marque and the cars—borders on obsession. He has owned more than he remembers and will happily go on about the subject for hours.

This visit to Atlanta was special: In conjunction with a little-known individualisation and customising entity at Porsche called Exclusive Manufaktur—which the company doesn’t even advertise—Carnicero was bent on creating the Porsche of his dreams.

Perros is one of three Exclusive Manufaktur managers charged with travelling around North America to help in-the-know clients navigate the process, guiding them both literally and spiritually. It’s her job to figure out what delights a customer, and decide how and when to push them to create a car that gives them a singular experience. 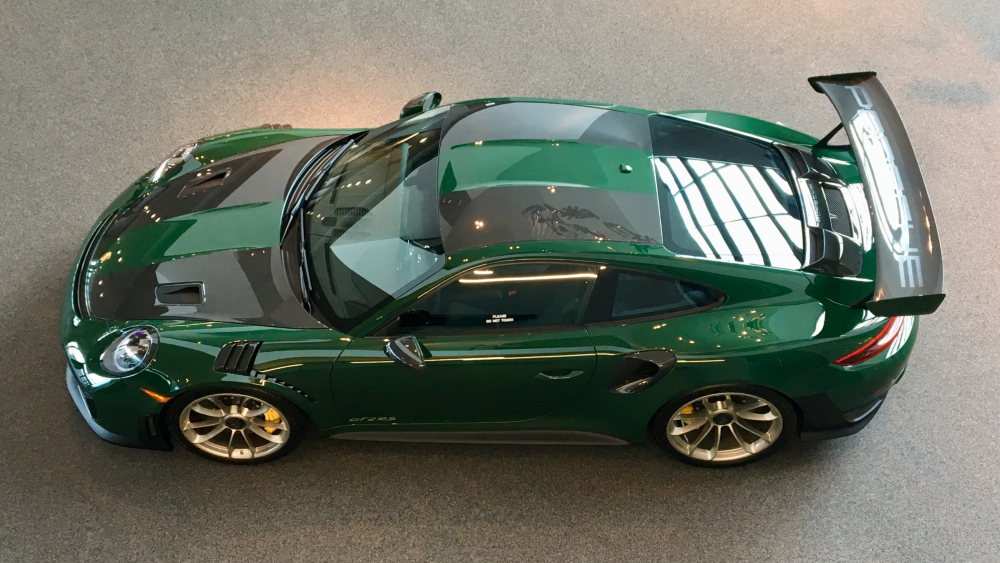 Carnicero’s 911 GT2 RS, the second car made for his thematic trifecta. Courtesy of Porsche

“Many customers say, ‘I want to build the most perfect Porsche for me,’ but don’t know how to get there,” says Perros. “I ask questions like, ‘What do you do in your daily life? What are your passions?’ ”

Carnicero says he is conservative when it comes to design. He had worked with Exclusive Man​-u-faktur on previous vehicles but describes those builds as opportunities to “stick my toe in creatively”. Perros suspected that nudging him beyond his tried-and-true blue might be the key to unlocking his ultimate 911.

And Porsche had recently released its millionth 911 in sparkling Irish Green, a fact that had not escaped Carnicero. Now his eyes swept from the blue paint sample on one side to the brown leather in the centre and then to the British Racing Green. “Huh,” he murmured. “Interesting.”

Two years later, in late-June of 2020, Carnicero is back yet again in Atlanta, this time to take delivery of a 911 Speedster in British Racing Green and tarpan-brown leather with silver stitching. Super-sport-oriented “GT” cars like the Speedster are traditionally offered only with black interiors, so Carnicero’s version will instantly stand apart.

But it won’t be lonely in his garage. Because on that June day two years earlier, he had an idea that would eventually evolve into a much bigger project. He didn’t want just one perfect Porsche. He was actually planning to assemble a triad of ideal 911s. All would share certain elements—like the exterior paint colour—but each would also have its own raison d’être. After he ordered a GT3 Touring and began the process of customisation, he soon signed for the second, a GT2 RS. As those builds progressed, he pulled the trigger on the Speedster. “I wanted three different and unique GT cars,” Carnicero says with glee.

Relatively few customers are aware of Porsche Exclusive Manufaktur. Porsche has done some level of customisation since the advent of the 356 model in the mid-20th century, but the process became more formalised in the late-1980s. EM innovations, which include everything from engine upgrades to painted wheels, became part of the actual configuration process in the mid-2000s. Today, as many as 50 per cent of the vehicles that Porsche builds have some special component from the entity.

If you order a sports-exhaust system on your Cayenne, say, or red stitching on your 911’s seat belts, those components have been developed and installed by EM’s technicians, either on or off the production line, at the brand’s storied factory in Zuffenhausen, Germany. Go into the online car configurator and scroll through options, and you’ll find some 700 choices with EM badging, from special leathers to aero body kits.

But there are two other levels of EM customisation that Porsche doesn’t overtly publicise. Each requires that a design manager such as Perros consults with the customer, who usually hears about the process through word of mouth.

What we’ll call a moderate custom build typically takes an extra two and a half hours on the production line. About three cars a day fall into that range—or 660 annually.

But then there are the serious builds, for customers like Carnicero. Only 30 to 50 vehicles a year get such treatment, and the extra time on the line may add up to 20 hours or more on top of the standard 30 hours. Carnicero’s GT3 Touring, with some 48 bespoke touches, took an extra 38 hours.

“You can go far beyond what you find in the car configurator,” says Boris Apenbrink, the Zuffenhausen-based director of Exclusive Manufaktur Vehicles. He says that some customers (often those

with long relationships with Porsche) “come to us and ask if something unique is possible. For instance, ‘Can I have my family crest embossed in the head restraints?’ Our philosophy is that on first contact we never say no—we evaluate.”

The average additional cost for a special build is between approx. $21,200  and approx. $28,300 he says, but the most elaborate builds can add as much as approx. $210,000 to the car’s price. The entire process may take six months or longer from the time a customer reaches out to the dealership. The first step is sitting down with Perros in Atlanta or at your local dealership. (Consultants will travel to customers.) Then EM engineers evaluate if and how they can execute the plan.

For instance, Carnicero wanted a novel detail included on all three of his special GT cars. When he was 19, he owned a 1971 911 that had a sticker on the window that read “Porsche Markenweltmeister 69, 70, 71,” denoting the company’s three-year string of wins at the World Sportscar Championship. He wanted to reproduce that sticker—but with 15, 16, 17 in celebration of the recent threepeat at 24 Hours of Le Mans—as an embossed detail in the leather of the central console. “This sounds pretty easy,” says Apenbrink, “but first we need to make the graphics, create the embossing, figure out how thin the logo and lines need to be, create the font and make sure we don’t cut too deep into the leather but deep enough to read it.” 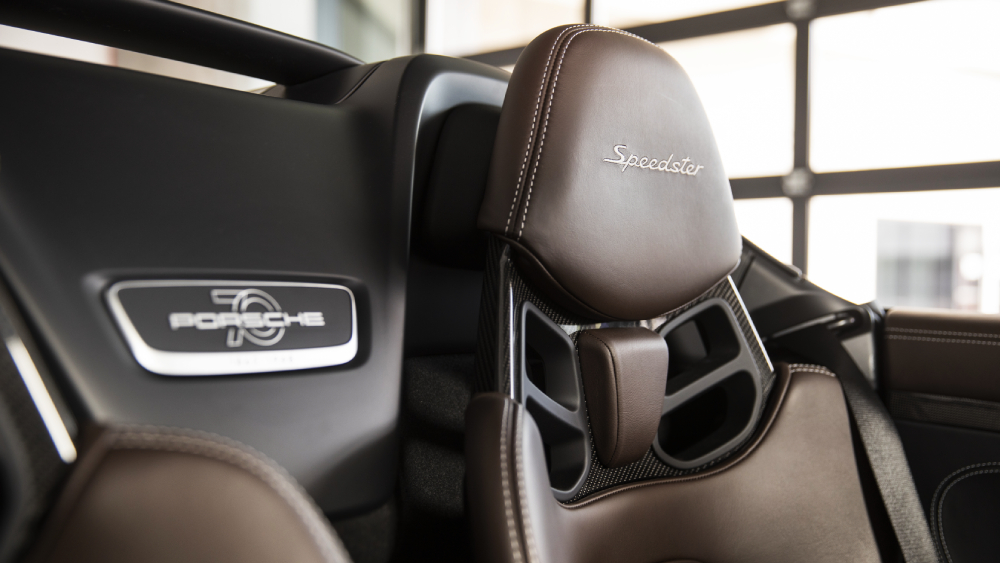 The interior is upholstered in special tarpan-brown leather. Photo by Ryan Hayslip

Every customised element must follow the same stringent tests as the regularly manufactured parts, and if it doesn’t pass muster with the designers or engineers, Perros and the other facilitators are there to manage the client’s expectations. But when an idea works, the result can thrill even Apenbrink and his team. “We are all car nuts here, and if a customer shakes us with a brilliant idea, we get as excited as if we were building our own car,” he says.

As the car develops, the EM team and the customer often forge a deep connection. “The Speedster is not a car that we built for Jorge. We created the car together,” Apenbrink says. “Going into the process, these customers must be highly dedicated. They become part-time designers and engineers. It is very important to underline that they have very precise and specific ideas. It is not, ‘Hey, I’m willing to pay a lot of money, so send me ideas.’ We are simply caretakers to try and birth a dream car.” 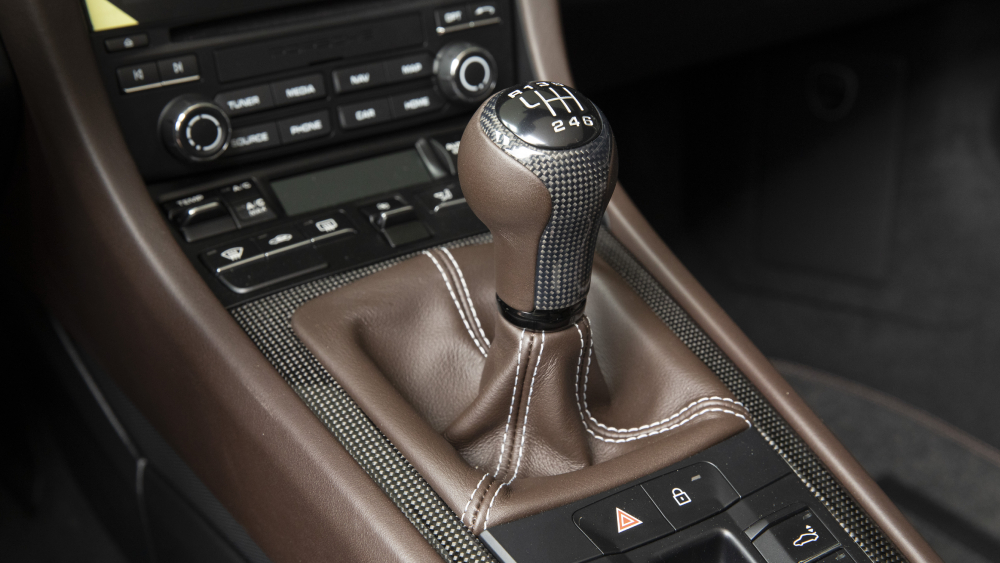 The gear-shifter is made from carbon fibre. Photo by Ryan Hayslip

Jorge Carnicero’s Porsche obsession began when he was 15. On a trip to the South of France with his parents in the late ’60s, he saw a 911 appear over the brow of a hill. “That I fell in love at that moment would be an understatement,” he says. “It came by very fast, and the noise of the air-cooled 911 was like nothing I ever heard before, shifting in the high-rev range. Oh, the emotions…”

Asked about the colour of that car, he pauses, then says, “Green, actually!”

Each of the three GT cars he special-ordered serves a different purpose. The first, delivered in February of last year, is a 911 GT3 Touring. “It is a gentleman tourer, what we used to call a sleeper,” says Carnicero. “It doesn’t have a giant wing or fender flares. You can enjoy it every day.”

Three months later, the 911 GT2 RS arrived. He describes it as a track car that can be driven on the street. “It shows Porsche in terms of high-performance capability,” he says. “It’s on the edge.” And the latest car? “My wife is in love with the Speedster. You still have the performance capability, but something about open-air motoring harks back to my youth.”

As for the Exclusive Manufaktur process, Carnicero speaks of it rapturously. “It was such a pleasurable experience,” he says. “It becomes like an addiction.” He estimates he has talked to Perros for more than 1000 hours over the whole process. 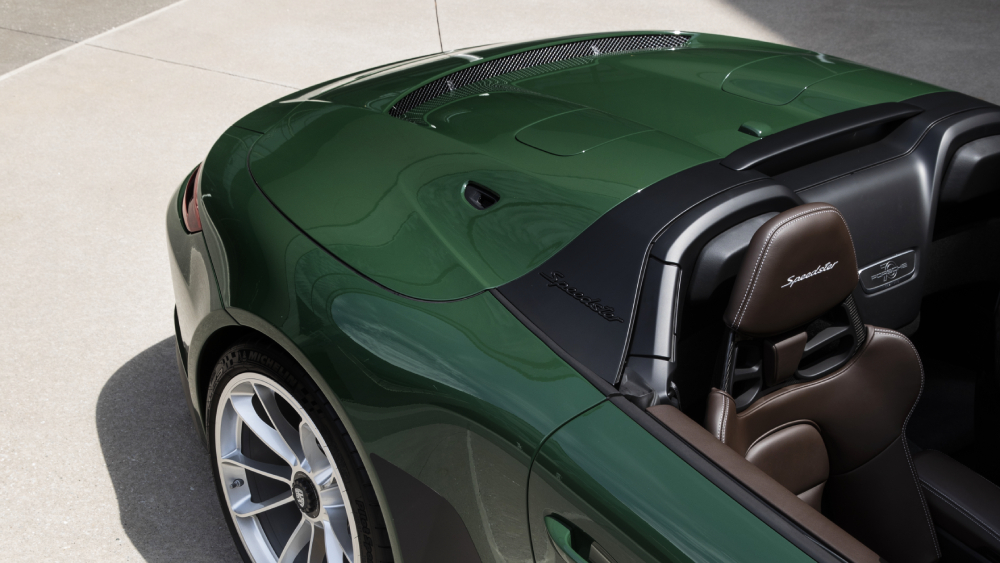 Says Carnicero, “It’s about people, being able to share these feelings. Without Boris and Yana, I couldn’t have done this. They are passionate about what they do. They get emotionally involved.”

Perros says that as soon as they had decided on a gentleman tourer for the first of Carnicero’s GT cars, everything flowed from there. “My goal isn’t to do a ‘stuffed’ car or the most expensive car,” she explains. “Sometimes it’s just one little thing that makes it special. Something that puts a smile on the customer’s face every time they unlock the door. That something special is something different for everyone.”

She notes the influence goes both ways. One day Perros arrived for a consultation with Carnicero wearing a blue-and-white Ralph Lauren button-up and blue suit. When they saw they’d twinned, both chuckled.

As for her relationship with Carnicero, the delivery of the Speedster did not mark their final conversation. “We’re already speccing his next car,” she says with a laugh.