The German marque has also revealed a tuned-up track-only twin.

The eagerly anticipated 2022 Porsche 718 Cayman GT4 RS is finally ready for its moment.

The range-topping variant made its official debut on Tuesday night as part of the lead up to this year’s Los Angeles Auto Show, weeks after the German marque shared footage of it undergoing testing at the Nürburgring. Aimed squarely at enthusiasts, the beastly speed machine will be available in two flavours: street-legal and track-only.

The current generation of the 718 Cayman is expected to be the last to feature an internal combustion engine, and it’s clear Porsche wanted to give it a sendoff to remember. What better way to do so than by building one of its most hardcore GTs yet? One look at the GT4 RS and it’s clear it was designed with performance in mind. It sports a more extreme aerodynamic package than the ”standard” GT4, including an adjustable front diffuser, a hood with NACA ducts and a prominent rear wing. The new elements combine to produce up to 25 per cent more downforce than the GT4. 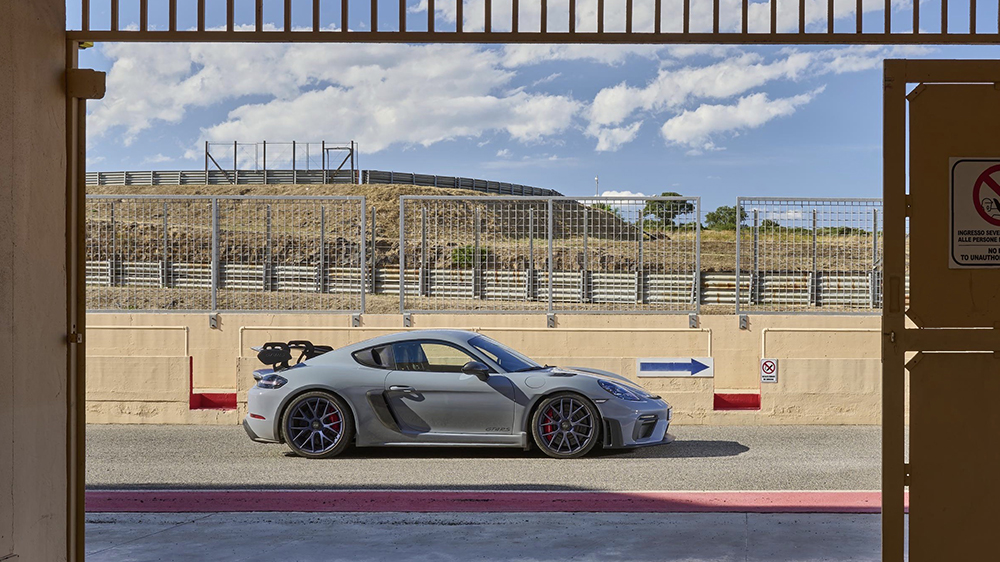 The biggest change, though, is the GT4 RS’s powertrain. The mid-engine sports car comes equipped with the same naturally aspirated 4.0-litre flat-six that can be found in the 911 GT3. Mated to a seven-speed PDK twin-clutch transmission, that’s been specially calibrated to speed up acceleration, the mill is capable of pumping out 368kW and 450Nm of torque and has a redline of 9,000 rpm, according to a press release. From a power standpoint, that’s 59kWmore than the GT4. The car can also rocket from zero to 100km/h  in 3.4 seconds—a half-second faster than its less-powerful sibling—and reach a top speed of 315km, which is 13km/h faster. Those specs make it the speediest street-legal 718 Cayman—by a wide margin. 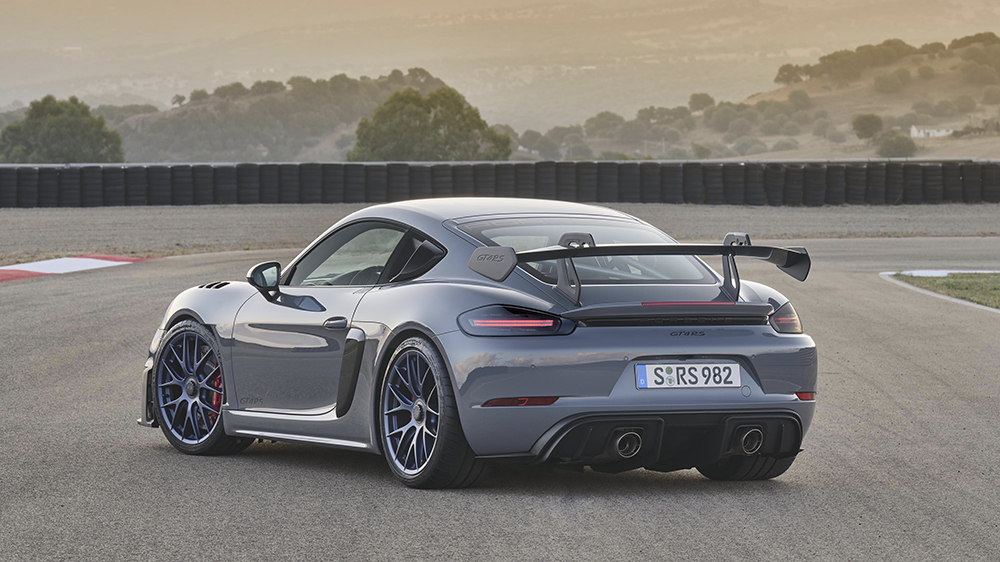 Other upgrades include shaving 35kg from the GT4’s curb weight, so that the GT4 RS tips the scales at a surprisingly svelte 1415kg. This is due in no small part to the ample use of carbon fibre inside and outside of the car (the optional Weissach Package includes even more carbon-fibre elements and magnesium wheels). The vehicle’s ride height has been lowered by 1.2 inches and its track-focused suspension has been enhanced with ball-jointed mounts, a GT4 RS-specific damper setup and revised spring and anti-roll rates. The car comes standard equipped with 20-inch forged aluminium wheels with centre locks (a first for the 718 Cayman) and cast-iron brake rotors, both of which can be upgraded. 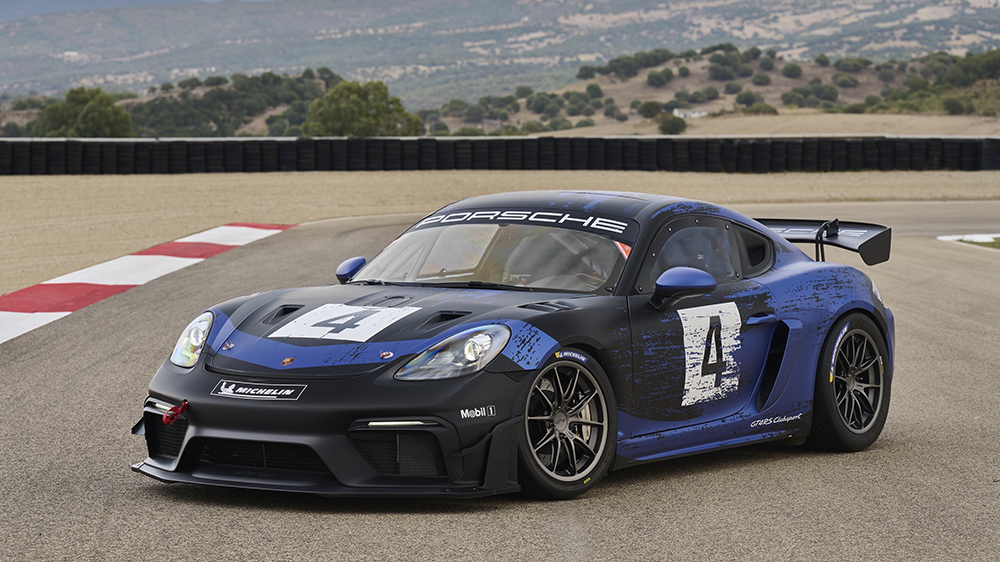 It’s easy to look at all that and come away thinking the GT4 RS is basically a street-legal race car. And you’d be right, but if you’re looking to really maximise your next track day (or start competing in a race series), the GT4 RS Clubsport is the model for you The track-only version of the top-tier 718 Cayman features the same naturally aspirated flat-six as its roadcar sibling, but it’s been specially tuned to generate an extra 5kW and 17Nm of twist, according to the brand. That may not sound like much, but you’ll be able to feel the difference when you pass other racers on the track. There’s also an upgraded suspension on which basically everything—ride height, shocks, anti-roll bars and more—can be adjusted to your heart’s content.

The two GTR 4S version look nearly identical from the outside, but the Clubsport features a significantly stripped down interior. Creature comforts have been banished from the spartan cabin and replaced by a roll cage, racing-style steering wheel, Recaro racing seat with a six-point harness and a fire extinguisher, all things you’ll want on hand when you’re trying to set a new lap record. 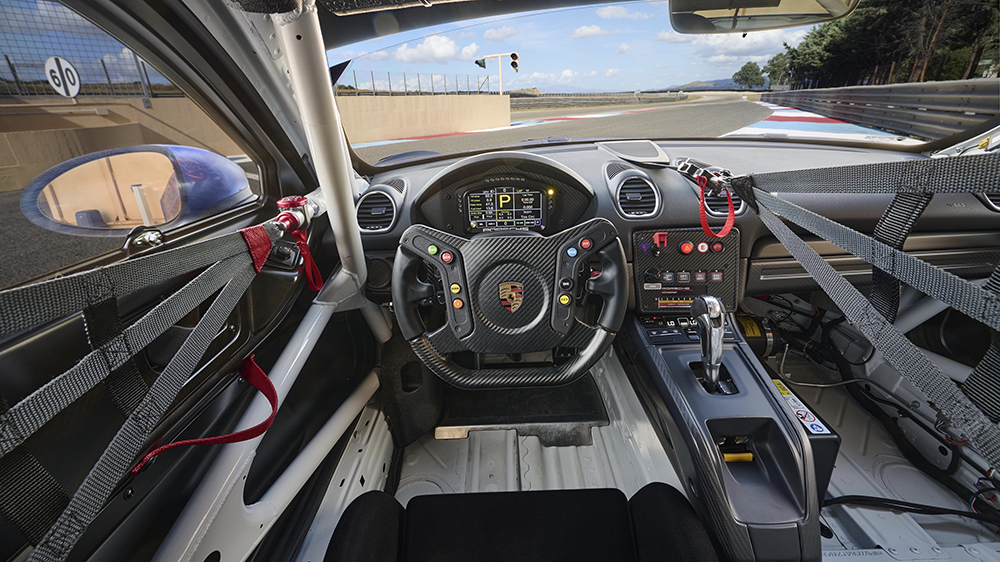 Inside the GT4 RS Clubsport Porsche

Whichever version of the GT4 RS you choose, prepare to spend big. The street-legal model will start at $300,800, which is almost three times as much as the entry-level 718 Cayman and should arrive mid-2022.