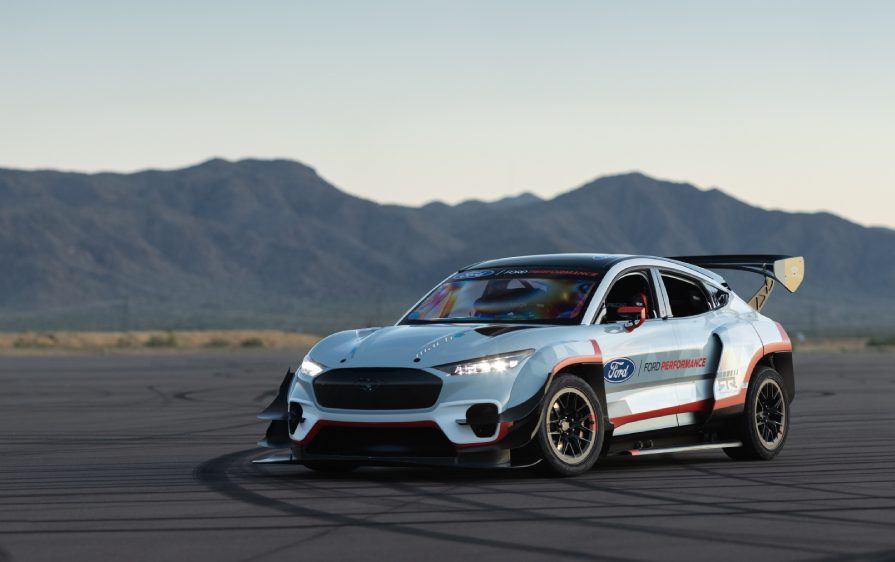 The prototype is designed to showcase the raw power of electric vehicles.

Still believe electric cars are boring? Then you should meet Ford’s newest Mustang.

This week, the American automaker offered its first look at the all-electric Mustang Mach-E, a one-of-a-kind race car prototype with a staggering 1043 kilowatts. Ford set out to create the vehicle with the hopes it would showcase just how much power is achievable without using a drop of fossil fuels.

“Now is the perfect time to leverage electric technology, learn from it, and apply it to our lineup,” said Ron Heiser, chief program engineer, Mustang Mach-E, in a press statement. “Mustang Mach-E is going to be fun to drive, just like every other Mustang before it, but Mustang Mach-E 1400 is completely insane, thanks to the efforts of Ford Performance and RTR.”

The high-tech interior is reinforced for maximum safety. Courtesy of Ford

It took more than 10,000 hours of work between the Michigan-based automotive giant and RTR to realise a vision that took heavy inspiration from Ford’s race car production programs. As a result, the car’s aerodynamic silhouette has a focus on the cooling ducts, front splitter, dive planes and rear wing. Three of its powerful motors are attached to the front differential and four more attach to the rear, pancake-style, along a single driveshaft. The configuration allows for a huge range of adjustability to set the car up for everything from drifting to high-speed track racing.

“The challenge was controlling the extreme levels of power provided by the seven motors,” said Mark Rushbrook, motorsports director, Ford Performance, in a press statement. “Mustang Mach-E 1400 is a showcase of the art of the possible with an electric vehicle.”

The 56.8-kilowatt-hour battery is made up of nickel manganese cobalt pouch cells for ultra-high performance and high discharge rate. The battery system is designed to be cooled during charging, using a di-electric coolant that helps to decrease the time needed between runs.

Sorry, gents. This ‘Stang concept is not for sale, but the vehicle is set to make its NASCAR debut sometime in the near future. If nothing else, it will be a powerful testament to how far EVs have come in the last decade—and to the approx. $16.5 billion Ford is pumping into electric vehicle development worldwide.

See more photos of the vehicle below: