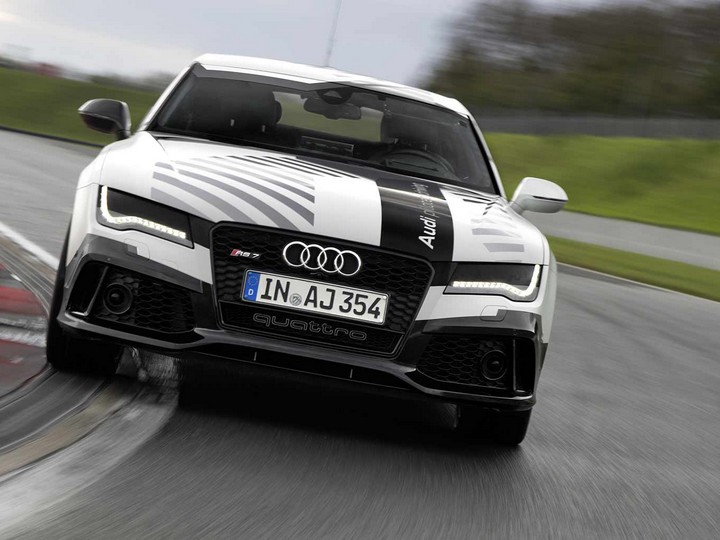 What effect will autonomous driving have on track days?

It sounds far-fetched but autonomous technology could make you significantly faster on a racetrack.

In the 1950s and 1960s, people predicted that in the near future, everyone would be riding around in flying cars. Preferably one powered by nuclear energy. In 2017, things haven’t changed much from the time Karl Benz’s Patent-Motorwagen took its first tottering steps into history. We’re still using an internal combustion engine. And aside from notable exceptions like the Terrafugia TF-X, cars are still firmly confined to terra firma.

The way we use cars has changed, however. Modern cars have been turned into mobile offices, concierges and electronic chauffeurs. While autonomous cars have been grabbing headlines recently, the technology is still in its infancy. The possibilities, however, are virtually limitless. Autonomous driving for the track?
One largely unexplored area is how autonomous driving technology could benefit the weekend racer and track day warrior. Note that I used the word “largely” and not “ignored”. BMW once showed off an M235i that can pull off millimetre-perfect drifts, while a self-driving Audi RS7 has lapped the Hockenheimring, posting a thoroughly respectable time in the process.

Autonomous driving technology, along with augmented reality head-up displays, could make you that much faster on a racetrack.

But isn’t the whole point of track days to drive yourself, instead of relegating that task to the car? Particularly if you’re driving that track day special Ferrari or Porsche (think the 458 Speciale or 911 GT3 RS)? A fresh start on track day
Let’s say your track day special borderline racecar was equipped with self-driving features. You could let the car drive all the way to the track, saving you precious hours and energy. You’ll arrive at the track fresher, and therefore, faster once you get around to the fun bits.

Once there, your in-car digital chauffeur will seamlessly morph into a digital driving instructor. Meanwhile, data on the track is downloaded via high-speed cellular data on the drive there. For the sake of argument, let’s call him Juan, after the legendary Formula One racer, the late Juan Manuel Fangio. With Juan, you’ll only have juan job
Juan will take you on a spotting lap around the track, demonstrating the ideal line to take and where to brake or accelerate. Juan will perform flawlessly, regardless whether the track is wet or dry. Of course, given you’re not a driving machine, you can’t be expected to remember all that Juan has recently demonstrated. But don’t worry. An augmented reality head-up display overlay will show you exactly where you need to apply the brakes, turn and accelerate out of the corner.

During this time, Juan will guide you along with his soothing voice, gently applying more or less steering lock for you where needed. However, should you get really out of shape, Juan will smoothly take over, literally steering you clear of trouble.

And while you, your car and Juan are cooling off in the pit lane, you’ll be able to download data from your time on the track to your smartphone, with an app performing the role of a race engineer, analysing your telemetry data. It seems you were riding the brakes through Turn 7 and a half-second too slow on the throttle exiting Turn 15, the app gently chides. Let technology lead you
The next time you head out, you find yourself having the confidence to let Juan and his augmented reality teaching aid take a (virtual) back seat. And on one particular lap, you post your best time, lopping nearly five seconds off your previous best. All the while safe in the knowledge that Juan will take over should your ego write cheques that your skill can’t cash.

Of course, Juan will take a back seat once again when it’s time for the return trip. And so will you, because a hard day out on the track deserves a long, hard rest.

So far-out science fiction flying/teleporting cars won’t be here any time soon. But an autonomous driving future just proves that the more things change, the more they stay the same.