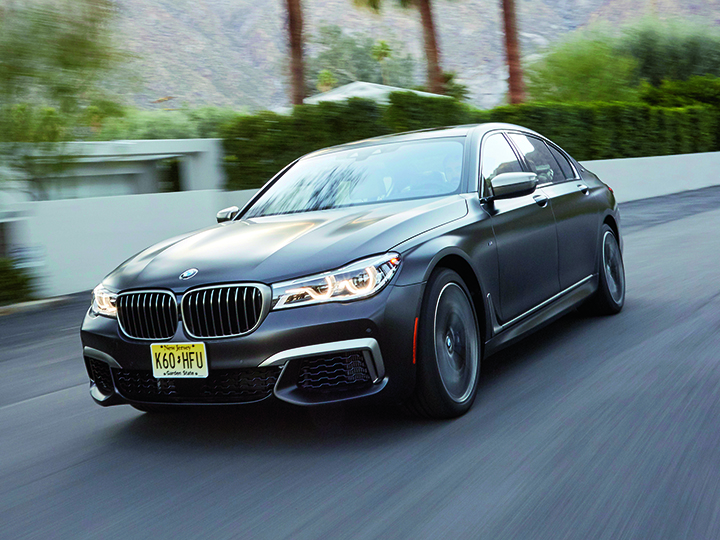 The BMW M760Li is a limo like no other

The pinnacle of BMW’s 7 Series – the M760Li – delivers gold-medal power, performance and precision.

It’s now 40 years since BMW launched its first 7 Series, the full-sized flagship sedan that put the Munich upstart against the ‘establishment’ Mercedes-Benz. Despite BMW’s reputation for sports-focused models, there has never been a 7 Series to wear the ‘M’ badge, a symbol of BMW’s top-performance variants for almost as long.

The M760Li xDrive is a milestone model, then, even if that convoluted construction of numbers and letters flags this as a member of the still relatively new M Performance range, rather than the legendary lineage of the outright M division.‘M7’ would have carried greater badge cachet, but the mid-sized M5 sedan is intended as BMW’s performance leader, where the limousine-dimensioned M760Li is pitched as its pinnacle of luxury and technology. Right now, however, the figures tell a different story: the M760Li is not only the most expensive BMW available, but also the fastest and most powerful. We’ve been assured that the next-generation M5, due to be launched next year, will reclaim its intended performance crown.

With a dip of a chauffeur’s cap, this $419,000, 448kW 7 Series limousine will take sir or madam from 0-100km/h in just 3.7 seconds. (In Australia, though, 85 per cent of 7 Series owners take care of the driving duties themselves.)Those 3.7 seconds give the M760Li clubhouse car park honours against both of Mercedes-AMG’s S-Classes, the V8-powered S63 and V12 S65 – as well as Audi’s S8, with which the BMW shares an all-wheel-drive configuration. Of perhaps greater interest to keen drivers, however, is the Thermal Club in nearby Palm Desert. BMW has set up a Performance Centre at this private country club racetrack, which otherwise offers access only for those members who commit to buying an on-site villa (typically US$1.5 million) and spending around US$20,000 a year in membership fees.

Even by BMW’s admission, no owner is going to take their M760Li to a circuit. But as a way of proving this is more than just a straight-line express, and is a limousine optimised for sporty driving like perhaps no other, it’s an impressive exercise. While there’s no fully masking the fact that this four-door sedan stretches 5.1 metres nose to tail and rolls along with a mass just shy of 2.2 tonnes, slipping the variable mode system into Sport brings an alertness and cohesion to the dynamics that will encourage you to drive it as fast as you dare.

Through the quicker curves of the 2.1km Thermal Club track, there’s predictability to the handling as one explores the high limits of the sticky, wide rubber. The M760Li resists the urge to push its nose wide, yet once understeer arrives, the chassis responds admirably to adjustments of throttle position.

Through slower corners, Integral Active Steering improves manoeuvrability – in effect shortening the car’s wheelbase by skewing the rear wheels by just a few degrees in the opposite direction to the fronts.

The xDrive all-wheel-drive system is biased towards delivering more torque to the rear axle, though the emphasis is on traction rather than oversteer, in keeping with the car’s overarching theme of sophistication.

The standard M Sport brakes are nothing short of stupendous, particularly considering the weight and speeds with which they must cope.

BMW’s latest V12 – this one marking 30 years since the company built its first automotive 12-cylinder unit – powers the M760Li to a top speed of 250km/h. (By electronically imposed coincidence, that’s the same top speed as the 1987 750i, which was the company’s first model with a voluntary 250km/h restriction.)However, an M Driver’s Package – which won’t be offered for Australian versions – can deliver a 305km/h autobahn special.

The aural experience isn’t ignored, with Sport mode controlling a flap in the M Sports exhaust system to deliver a more prominent growl.

The M760Li remains entertaining on a mountain road, though a contrasting satisfaction is equally to hand in exploring the more mannered side of this car’s duality. BMW says the M760Li is engineered with the biggest gap between Comfort and Sport settings of any model in its showrooms. Prod the former button and civility indeed takes hold. The firmer springs and faster-acting dampers of this 7 Series become softer and more relaxed, without compromising vertical body control. An additional Comfort+ mode designed for poor roads might be more noticeable in Australia than it was on the smooth roads of the US launch route; incidentally, the M760Li’s xDrive makes it the first all-wheel-drive BMW sedan to be sold here.

The twin-turbo V12 also becomes more dulled in both sound and response, marking the first semblance of similarity with the engine BMW builds for Rolls-Royce – and with which the M760Li now shares its 6.6-litre capacity, as well as its technical foundations.

This is not to say that the 7 Series drifts off into slumber. Despite some initial lag that isn’t ideal, the M760Li’s in-gear acceleration feels to be even more impressive than its standing-start sprint as the car surges relentlessly and seamlessly through its eight-speed transmission, the engine wringing out the maximum 800Nm torque output that’s available from just 1500rpm.

For owners preferring their fistful of performance to be wrapped in a velvetier glove, the car can be switched to V12 Excellence spec for no extra cost. This deletes the sporty M Aerodynamic body kit and M Sports exhaust, trades the M light-alloy V-spoke wheels for a BMW Individual W-spoke design, swaps the blue metallic M-badged brake calipers with plain high-gloss-black versions, and replaces the M760Li bootlid badge with a less boastful, bright chrome ‘V12’ logo. Also standard for Australia is an Executive Lounge/Rear Seating arrangement that comprises two rear seats with electric adjustment and centre console divider, pillowy headrests and champagne-chilling cool-box. The front passenger seat features a footrest and can slide to an extreme-forward position. Standard rear legroom, of course, is already more than generous. Other M760Li exclusives include a 16-speaker Bowers & Wilkins audio system and Apple CarPlay smartphone integration.

As BMW’s most expensive car, it’s not the vastness of the M760Li’s features and equipment that most surprises or impresses, but the way in which its combination of highly capable dynamics and elevated opulence has shifted the conventions of luxury limousines.