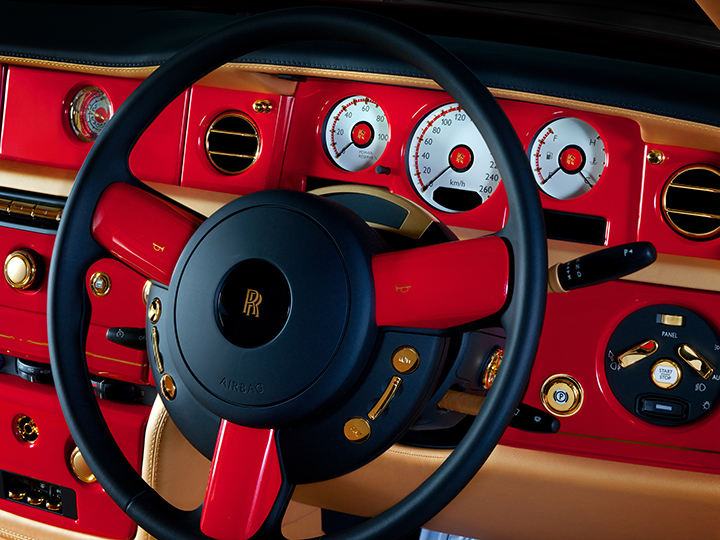 Is there any car that Rolls-Royce Bespoke won’t build?

It prides itself on being able to create almost anything the customer desires.

Michael Bryden holds the keys to the automotive world’s most exclusive candy shop – as the head designer for Rolls-Royce Bespoke, it’s his job to grant the wildest dreams of the brand’s cashed-up and fiercely individual loyalists.

It took the opening of Australia’s largest Rolls-Royce showroom in Melbourne to entice one of the legendary company’s most intriguing employees to Australia, where he found an area set aside specifically for him, mirroring the ‘Atelier’ showroom at the company’s headquarters in Goodwood where Bryden typically sits down to discuss his affluential customers’ needs. You can, for example, match your new Rolls-Royce to your yacht. “It’s something that we’ve done a couple of times before where the customer may have a unique livery on their yacht and they want to echo that on their ‘land tender’, if you like, their Rolls-Royce,” Bryden says.

“We’ve matched the colour is the main thing, but we’ve also done bespoke features that will help you transition between land and water.

“In the trunk of the Phantom Drophead Coupe we designed a feature where you can store your deck shoes, something that’s essential when you’re boarding a yacht is to have a pair of deck shoes to hand so we had a convenient location under the boot floor in the Phantom Drophead, so we created a tailored area where these deck shoes can fit perfectly.”

Rolls-Royce Bespoke can also theme your car with your yacht’s unique motif. “We’ve had that detailed embroidered subtly on the headrests of the car before, so the unique livery of the yacht continues inside. And the application of teak (on interior surfaces) is something that is essential for a yacht-based car project. “The reverse is also true. We’re specialists in the use of wood veneer, and we have used a particularly type of mahogany on our Drophead Coupe. A customer wanted to match the rich, lustrous red-orange mahogany that we use within our cars (on their boat), so we were able to assist there.”
If a customer’s request falls outside the expertise of the Rolls-Royce team, the company can call on external experts to assist, as it did when it was mixing diamond dust into the paintwork of the ‘Elegance Ghost’ model it created at a customer’s request and displayed at the Geneva Motor Show in 2016. “(It was) one of our more challenging paints, where diamonds were crushed and introduced into the clear coat to give a lustrous sparkle. The paint was absolutely incredible, two-tone finish in anthracite and black with a diamond clear coat over the top,” Bryden says.

“As with a lot of the heavy bespoke features, they take a lot of trialling to make sure the effect we get using that technology is one that’s appropriate for the car.

“We partnered with a diamond specialist. We’ve worked with jewellers in the past but never in a paint sense. Because we are operating in an area outside automotive, there are partners that we have to link with to lean on their expertise in a particular field to make sure we get the best possible outcome.” In another famous project, the Bespoke department helped create a fleet of 30 Rolls-Royce Phantoms for casino tycoon Stephen Hung, featuring custom paintwork and interiors, including two examples extensively fitted out with solid gold or gold-plated trimwork.

“Inspiration really is everywhere,” Bryden says. “One of our customers is inspired by space travel, and wanted to capture the atmosphere of a space shuttle in a technical sense, and apply materials that have never been applied within a Rolls-Royce before. He gave us an open brief and we were able to steer the creativity of this project, as we are able to do in a number of our projects.” During the opening of Rolls-Royce’s new Melbourne showroom in the suburb of Richmond, Bryden also pulled the covers from the ‘Dawn Inspired By Fashion’, an interpretation of an open-top Dawn inspired by the catwalks of Milan, Paris, New York and London. Is there any project that Rolls-Royce Bespoke won’t build? There are the boundaries of physical possibility and legal adherence; beyond that, almost anything goes.

“The only real limit we have is that we won’t put something on a car where the level of quality isn’t to a Rolls-Royce standard,” Bryden says.
“We very rarely like to say no our customers so what we prefer to do is create an alternative proposal that comes somewhere close to achieving what the original request was.”

In that sense, Bryden’s job must be one of the most rewarding in the automotive world. Leading a team of five working purely on Bespoke projects, he meets with wealthy customers when they come to the Goodwood factory to discuss their next purchase, and sometimes travels the world to meet valued customers on their own turf, as he did in visiting showrooms in Sydney and Melbourne to meet one-on-one with Australian clients. “On this trip I’ve been talking to customers about a mix of models – there’s a bespoke Dawn, a bespoke Black Badge, and one customer is already discussing with us a bespoke project on our new Phantom.

“There is an American customer named Michael Fuchs, who exhibits all of his bespoke projects at Pebble Beach every year. He is very loyal so we have sometimes gone to his office to understand his requirements.

“From a creative perspective, it’s fantastic. We’re very fortunate to work with a base vehicle that’s beautiful in its own right, then we’re taking that blank canvas and creating something that’s unique.

“The best part is when you walk past the line which is right next to the design studio, and you see a Bespoke project you’ve been working on months ago, and you kind of recognise it.