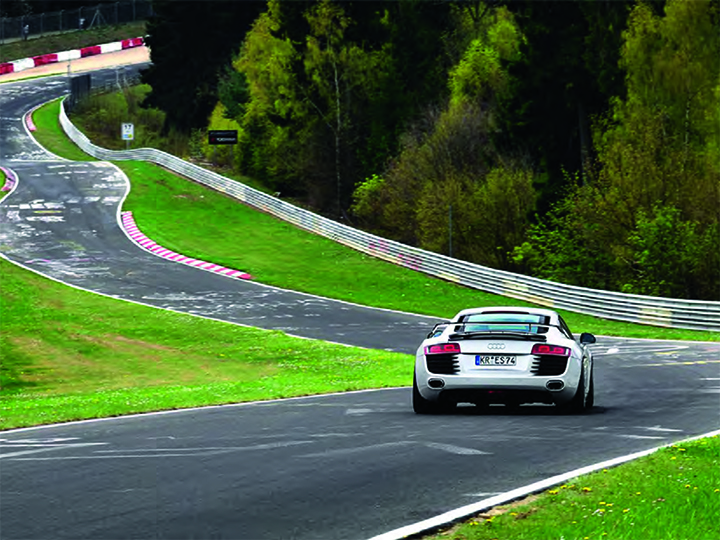 Driving in the wheeltracks of greatness

If tackling the Nurburgring, Spa-Francorchamps and Circuito Ascari in a bevy of supercars sounds like your kind of holiday, read on.

If a posse of supercars, Europe’s legendary driving roads and racetracks, and a range of Michelin-starred dining and five-star accommodation options sounds like your kind of holiday, Ultimate Driving Tours might have saved you a lot of time in having already put together the dream adventure for you.

The Melbourne-based company regularly traces its supercar-centric routes on breathtaking roads, but the 2017 Ultimate Track Tour, taking place from July 18 to 23, will take its jet-setting participants onto Germany’s iconic Nürburgring Nordschleife, Belgium’s scenic Spa-Francorchamps and the lesser-known, but brilliantly engaging Circuito Ascari in Spain.

The tour opens with aperitifs, drinks and dinner at the Hotel Am Tiergarten’s Restaurant Pistenklause, the favoured Nürburgring post-victory venue of such racing legends as Niki Lauda and Ayrton Senna, in the Eifel mountains. Warm up in the morning with kart racing at Michael Schumacher’s kart centre, before setting off for flat-out laps on the Nordschleife (below) in a selection of track-prepared Porsche, Lotus and Radical machines, with pro instructors. It’s then a similar scene at Belgium’s Spa-Francorchamps, where the challenge to drive flat-out through the fabled Eau Rouge and Raidillon section might just be the adrenaline-laced work of a day. You’ll certainly be primed to bang in a qualifier by the time you reach Circuito Ascari in south-west Spain, which includes a ‘Best-of-Bends’ sampler from the world’s most famous circuits.

Luxury accommodation in Germany and Belgium goes champagne-in-shoe with guided tours of each locale, while Ascari’s motorsport-resort and spa setting ushers in the opportunity to throw off your gloves and unwind.

Pricing for the Ultimate Track Tour is $9950, to which must be added flights, accommodation, meals and travel insurance. Those still wanting more may opt for a three-day add-on at Circuito Ascari ($4990), which does include transfer flights (Frankfurt-Ronda), vehicle hire and professional driving instruction.