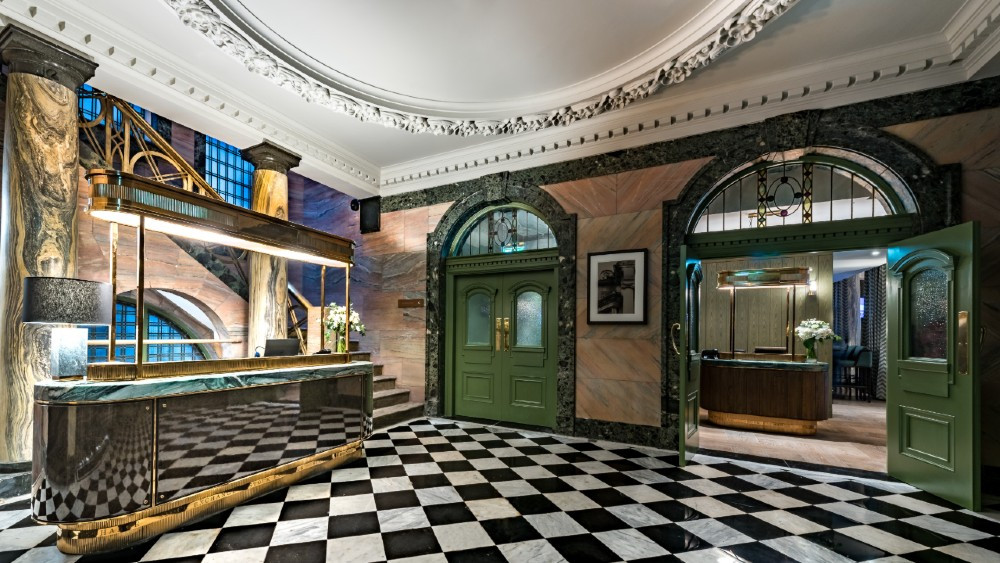 Two Manchester United Stars Are Getting Into the Luxury Hotel Game

Long steeped in soccer, indie music and its industrial roots, Manchester is in the midst of a renaissance. You see it in the vibrant culinary scene, which this northern autumn resulted in the awarding of a Michelin star—the first in the city in more than 40 years—for Mana, the just-over-a-year-old restaurant helmed by Noma alum Simon Martin. You also see it in the myriad construction sites that point to the city’s robust pipeline of developments. And, as of mid-November, travellers can feel that renewed energy in the city’s newest luxury hotel—which also comes with its own Michelin-starred chef. Owned and developed by Manchester United stars Gary Neville and Ryan Giggs, the much-anticipated Stock Exchange Hotel is the first Relais & Châteaux property in the city—a rare distinction to earn prior to opening, yet indicative of the hushed, 40-room hotel’s devotion to honouring a glorious chapter in Manchester’s history.

In 1906, during the cotton boom, the Manchester Stock Exchange was founded as an antidote to the too-crowded Royal Stock Exchange. Neville and Giggs bought this stunning Edwardian Baroque building designed by Bradshaw, Gass and Hope in 2013, and with the addition of two floors, have transformed it into a hotel that encapsulates a shifting Manchester. “We very much see ourselves as the guardians of the former stock exchange building, (which) was built as a symbol of confidence in the community and in the future growth of Manchester, (at) the time the ninth most populous city in the world.” explains Giggs. “The building had a significant impact on the city, so our goal was to bring it back to life again, preserving the heritage and giving the next generation memories and stories to tell.”

An elegant bedroom in the historic building Photo: By Bevan Cockerill

Istanbul studio Autoban ensured that past played a pivotal role in the design. The black-and-white floor at the entry is original, as is the stained glass, ornate cornicing, and gorgeous swaths of dusty pink and green marble adorning the lobby. Behind the reception desk, the centrepiece staircase is a relic from the trade era, and features lustrous brass uncovered during the restoration. Other references woven throughout include a motif based on the shape of the hooks that stockbrokers once hung their coats upon, and a sprinkling of retro menus and prospectuses on the walls.

After checking in in a cushy lobby lounge (while munching on fresh-baked scones), guests are ushered up to the guest rooms and suite; each features a different layout, but all flaunt moody, muted green and cream palettes, soft seating, elegant oval mirrors, and brass touches, along with old photos of the stock exchange that were hand-tinted to add subtle brightness. Top options include the signature Boardroom Suite, with marble pillars, a fireplace, and 20th-century panelling; the two-bedroom Nineteen ‘O’ Six suite; and the House, the coveted 325-square-metre open-plan penthouse that crowns the fifth floor with a private rooftop terrace.

As buzzed-about as the hotel is its Bull & the Bear restaurant, helmed by Tom Kerridge, the Michelin-starred chef behind such lauded spots as the Hand and Flowers in Marlow and Kerridge’s Bar & Grill at Corinthia London. “Manchester is a special place with a vibrant food scene, (and) we’re excited to bring a bit of what we do up north,” says Kerridge. His gussied-up British comfort food, best relished from the counter overlooking the open kitchen, includes a crispy Chicken Kiev, plump chips paired with gherkin ketchup, and a sticky toffee pudding that gets a savoury jolt from beef suet. The adjacent bar, meanwhile, successfully tempts guests to stay a bit longer with nightcaps like a Peanut Butter Old Fashioned.

Although a relaxed restaurant, the Bull & Bear comes with a dramatic setting that’s in keeping with the feel of the rest of the hotel. A sculpture by the chef’s wife, artist Beth Cullen-Kerridge, commands attention in between the snaking curve of banquettes, and the dining room’s bygone days as the trading floor are conjured by a dreamy ceiling dome spruced up with gold. Rates start at £1750 (A$3330) for the House; £1,000 (A$1900) for the Boardroom Suite; and £480 (A$910) for the Nineteen ‘0’ Six Suite.