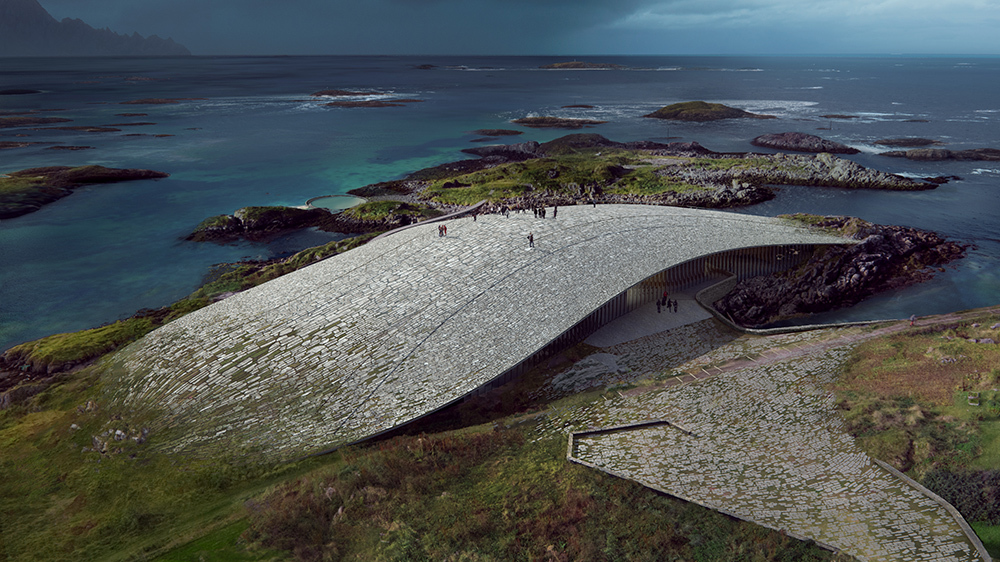 Dubbed The Whale, the museum is located in a tiny coastal village that draws more than 50,000 whale watchers every year.

Norway is no stranger to strange and playful architecture. But a new marine-inspired museum set to be built on the Northern island Andøya may take the cake.

Designed by the Copenhagen-based architecture studio Dorte Mandrup, The Whale, as it’s been dubbed, will be nothing if not true to its moniker. The proposed structure is designed to look just like one of the region’s most familiar animals: whales. The museum is set to open in Andenes, a tiny coastal village at the tip of the northernmost island in the Vesterålen archipelago. Located nearly 320 kilometres north of the Arctic Circle, the village is known for being one of the best places to spot migrating whales in the world, drawing more than 50,000 visitors a year.

Situated by the edge of the ocean, the curved structure is meant to look like a natural outgrowth of the rocky landscape, as if, according to the Dorte Mandrup, “a giant had lifted a thin layer of the crust of the earth and created a cavity underneath.” Once complete, The Whale will serve as educational museum for the thousands of tourists that flock to Andenes annually. Its stone-covered, shell-like rooftop will also function as a viewing platform from which guests can spot the pilot, minke, and sperm whales that are drawn to the waters around the village every June to August because of the abundance of squid.

“Located this far North, Andøya is a unique place and The Whale an extraordinary project,” firm founder and creative director Dorte Mandrup said in a press release. “Not only will we be creating architecture in yet another remarkable landscape, but we will also take part in increasing the understanding of whales and preservation of marine life.”

A rendering of the interior of The Whale MIR

As striking as The Whale may look, it will fit right in with the country’s growing collection of architecturally striking buildings. Other particularly bold examples from this year include an underwater restaurant appropriately named Under which opened earlier this spring and a twisting art museum/public bridge called the Twist located in the Kistefos Sculpture Park.