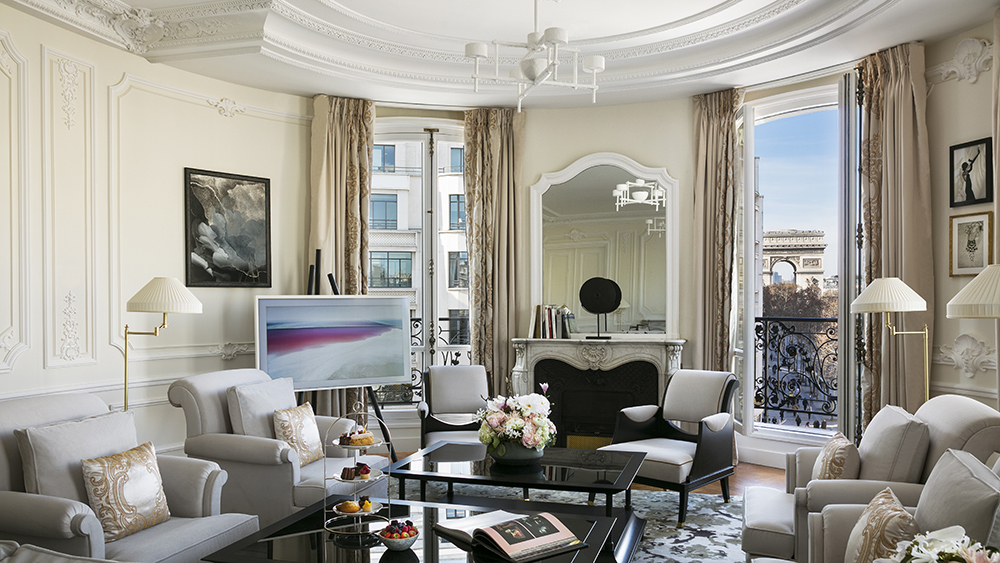 Live Like A Parisian In These Apartment Style Suites

At the Hotel Barrière Le Fouquet, the suites have unrivalled views of the Arc de Triomphe and the Eiffel Tower.

If you want to know what it’s like to live like a Parisian, book one of the four new sprawling apartment-style suites at the historic Hotel Barrière Le Fouquet’s Paris on the celebrated Champs-Elysées. Unveiled this fall, the classic Haussmann-style suites exude that coveted French elegance with stylish décor, high ceilings and vast windows with unobstructed views of the Arc de Triomphe and more.

From the balcony of the George V suite (US$13,130 per night, around A$18,900), in the evenings you can take in the Arc de Triomphe bathed in lights or have breakfast served in your private dining room while gazing at the landmark. With 140 square metres of elegantly designed space, including a comfortable sitting room which opens into the dining room, you can host friends to share the view like it’s your own apartment. Designed by French interior designer Jacques Garcia, the spacious four suites reflect the spirit of French style with herringbone parquet flooring, large marble fireplaces and bathrooms, Haussmann-style mouldings and detailing, and decorative fabrics. Don’t worry about the noise from the street below, the hotel took that into consideration when executing its massive redesign with sound-proofed windows (four times glazed glass).

For even more of Paris’ best views, the sprawling Arc de Triomphe Haussmann-style apartment suite (around A$23,000) offers views of its namesake and the Eiffel Tower from a continuous balcony that extends from the dining room to the bedroom. And, you can cozy up at one of its two huge fireplaces on fall or winter evenings.

Bookings of one of the four signature suites come with plenty of perks to make you feel at home, including complimentary roundtrip airport or train station transfer, a spa treatment for each guest, dinner for two in the suite or at Fouquet’s Paris or at Le Joy restaurants and, of course, access to the hotel’s spa, sprawling swimming pool and fitness centre. But you might just want to linger in these large suites and enjoy the comfort of your apartment-style accommodations.

The suites, part of 19 new rooms and suites, are the most recently completed section of the historic hotel’s two-year renovation. In addition to its 81 refreshed rooms and suites, the hotel has a private courtyard for outdoor dining and cocktails, and a rooftop lounge, La Marta, which attracts a crowd in nice weather for its relaxed ambience. Perhaps its homey feeling comes from the fact that Hotel Barrière Le Fouquet’s is the city’s last luxury hotel still in the hands of a French family.