The Indonesian Archipelago Is A Glorious, Earthy Reserve

In an off-the-radar fringe of an Indonesian archipelago lies a sumptuous private-island retreat where environmental sensitivity has proved a boon, not a burden, to sensuous indulgence.

The best way to arrive in Venice, according to many a seasoned tourist, is by boat. As it happens, the best way to arrive at the Bawah Reserve – a cluster of six islands in Indonesia’s remote Anambas Archipelago – is, unless you’re being whisked there in a private yacht, the only way: in an amphibious plane which touches down an hour and 15 minutes after its departure from Singapore, 150 nautical miles to the south-west.

It’s hard to imagine anything more captivating than the reserve creeping into your aerial field of vision – six amorphous blobs of green, flicked onto their twinkling azure backdrop from the brush of some abstract expressionist creator – gradually revealing their lush splendour in more and more detail, before finally rising up to eye level as the craft touches down, leaving a spray of crystalline water in its wake.

Bawah Reserve is cliché flypaper: a “Mecca” for those in search of a “hidden oasis”, with “pristine beaches”, “unspoilt serenity” and “back-to-nature seclusion”. And indeed, this 13-beach, three-lagoon retreat deserves all the gushing shibboleths it attracts – partly thanks to its being tucked away from the centuries-old trade route between China and Singapore – but the slogans really don’t tell the whole story.

Once threatened by illegal dynamite fishing, this previously uninhabited cluster of islands was discovered by British shipping entrepreneur Tim Hartnoll – an avid water sports aficionado who, growing up in Singapore, had the southern extremes of the South China Sea as his playground – during a diving trip in 2006. Hartnoll having secured a long-term lease on the islands along with eight investors, a construction project began which put harmony with the island’s natural environment at the top of the priority list. The resulting resort (and that seems a crass word here) feels the antithesis to some concrete high-rise that’s been thrust, dagger like, into a hollowed-out patch of Phuket.

Something you’ll notice about the structure, looking down a hundred metres or so from that seaplane, is that there’s so little of it – a few brown strokes in the sea and the jungle from that aforementioned creator’s brush. “We could have done high-capacity here, but as it stands, less than one per cent of the entire land mass has been built on,” explains Paul Robinson, the reserve’s chief operating officer. “The footprint is so small. Everything except the jetty is surrounded by forest.”

What there is of Bawah Reserve – 36 villas plus public area structures, for now – was constructed by a team led by Singaporean architect Sim Boon Yang, over five years, from recycled teak and sustainably sourced bamboo from Java, with roofs thatched using vast palm leaves from a neighbouring island. 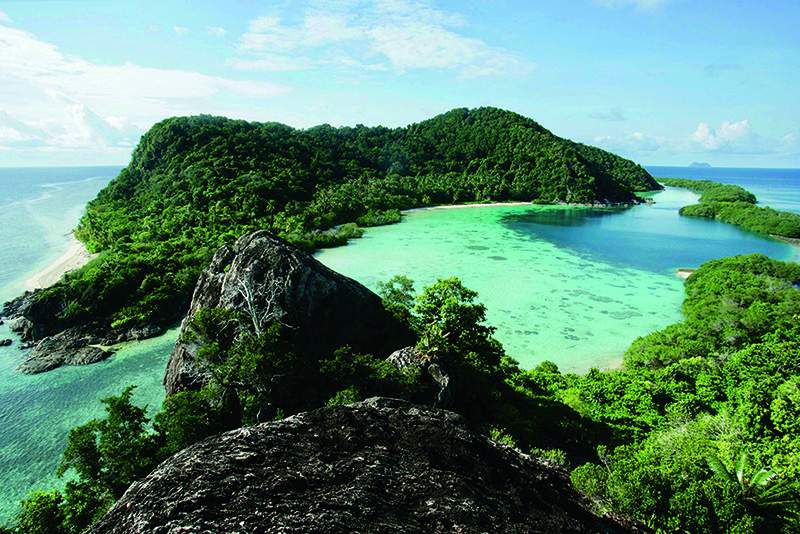 “We used no machinery building the place, no bulldozers, just the odd little cement mixer,” says Robinson. “We even brought divers in to move coral out of the way and replant it, so the jetty piles could be put in without disturbing them.” On occasion the coral was too large or deeply embedded to move: “That’s why the piles are so irregular,” adds Robinson.

Irregular jetty piles actually fit right in here, this being a place where prissy uniformity is anathema, thanks wholly to the construction team’s decision to use traditional local methods and materials. Rocks were heated up intensively then dropped into the ocean, the abrupt change in temperature cracking them into smaller pieces suitable for masonry work, which is why the buildings look pleasantly rugged and rustic; the boardwalks and bridges that link the huts to the communal areas are made mostly of driftwood, making for an elegantly gnarled, imperfect appearance. It’s all charmingly dishevelled, in a way that makes most stilted-chalet honeymoon destinations seem not so much pleasantly impeccable as over-kempt, sterile … fake, even. 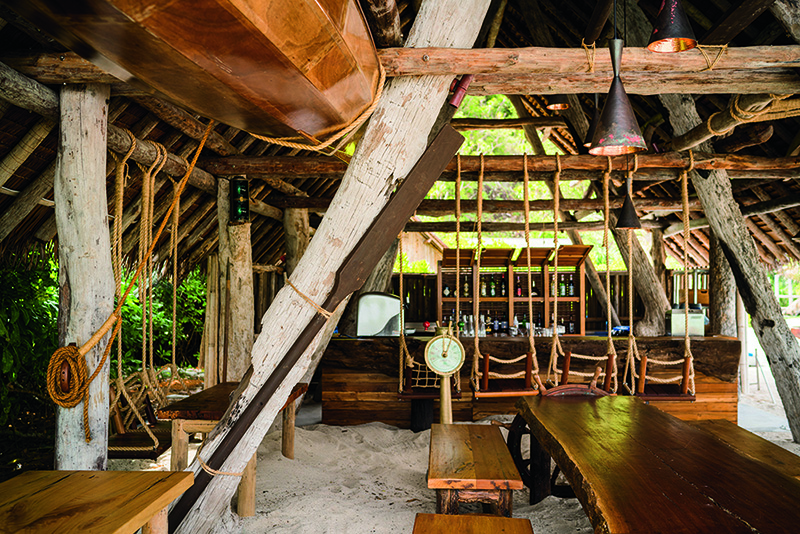 Of course, there’s more to environmental sensitivity than building methods, and you won’t find Bawah resting on its laurels. All hot water used here comes from solar power (bore water is only called upon in emergencies); rain is captured in storage tanks, hidden above and below ground; there’s a no-expense-spared approach to desalination processes; air conditioning is absent except in the guest rooms; and LED lighting is used throughout, powered by an electrical system that is European-certified.

“We also research where our rubbish ends up,” says Robinson, “and process organic waste to create bio-gas which powers the kitchen and staff canteen – that decreases our dependency on bottled energy. Every flat area we can find, there’s a garden, including on the roof of the kitchen. Pond water is used for watering and toilets and mosquito control involves eliminating larvae with the endless cleansing of water supplies, rather than fogging or chemicals, which not only means people not being bitten but also more butterflies and insects.”

Then there’s the little things: the copper water bottles provided on arrival; the opportunity to choose thin, quick-drying towels over the kind of fluffy-cloud miniature duvets found in most hotels; the coral-friendly, locally made lip balms, sun creams and mosquito repellents provided in your suite.

The Bawah Anambas Foundation, meanwhile, teaches sustainable practices to the local community. Local islanders here – purely through lack of knowledge, rather than indifference – traditionally discarded plastic rubbish into the ocean without a second thought. The foundation has created educational programmes to change this, as well as removing about 16 tonnes of discarded fishing nets and plastic from local reefs since opening. “We’ve also shown local villagers how to use compost instead of chemicals,” says Robinson. “Without education about quality of soil, chemicals seem like magic.”

What’s remarkable about all this is that it’s all so authentic. The phrase ‘eco-resort’ has a holier-than-thou, tokenistic ring to it these days – a hollow conscience salve for the visitor. Here, conversely, all the green initiatives and credentials are thoughtfully executed, manifestly effective, all-pervasive but never bragged about; you won’t find ‘in-your-face’ conscientiousness here. But what’s perhaps even more remarkable about them is that they come at precisely zero cost to weapons-grade sybaritism. 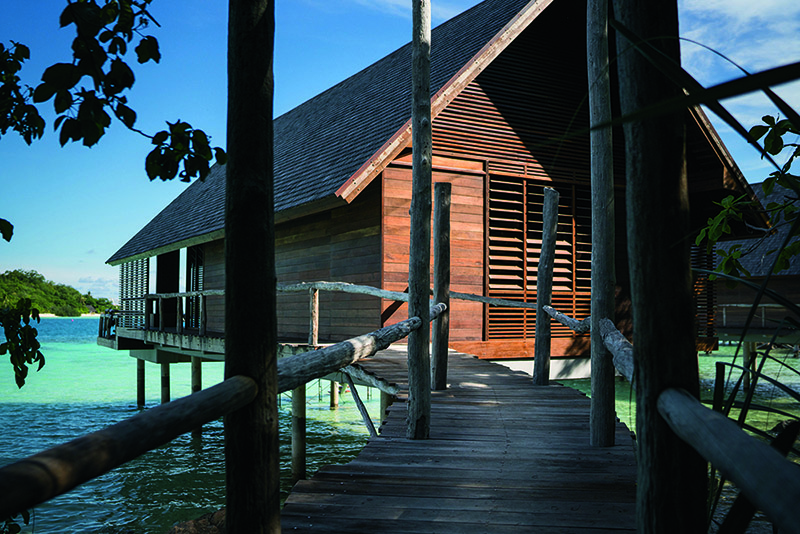 Bawah’s villas – some built on the sand, others over water structures at either end of the island and on a short path over the water, two garden villas up in the verdant heights – feature canopied king beds, copper bathtubs, teak floors, soothingly patterned rugs and chandeliers. The resort’s cuisine sees Mediterranean and local flavours singing in sweet harmony, with fresh fish, barbecued meats, salads and wraps and Asian dishes all on offer. The Boat House offers beach-side dining while under the bamboo-reed roof of the main restaurant, Treetops, you’ll enjoy the very best views of the lagoon.

The challenges involved with getting produce here mean that even the seaplane regularly arrives with provisions tucked into its nooks and crannies, but a post-prandial sip at the low-lit Jules Verne bar will reveal this has imposed no compromise on the range of global wines on offer. A picnic, a short boat ride away on one of the other islands’ deserted beaches, is also a must. 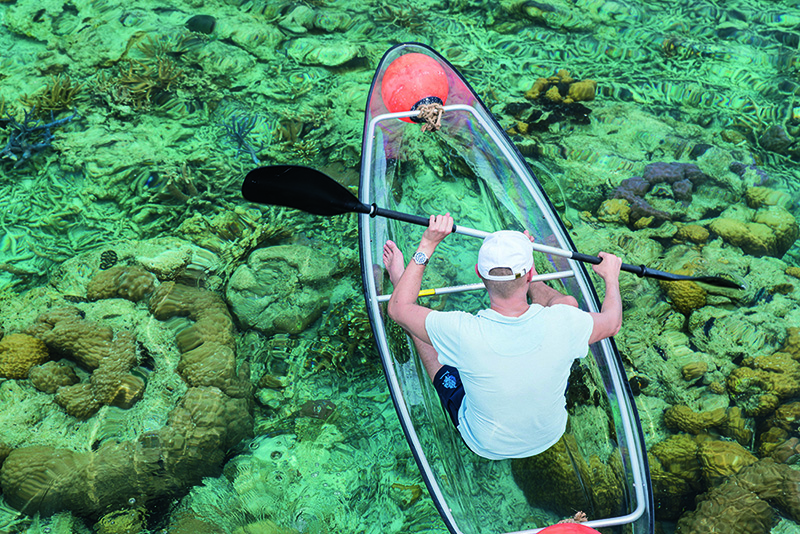 Activities here are ‘wholesome’ in a very modern, rather than matronly, sense of that word: tours of the organic permaculture gardens where grows much of what ends up on your plate; snorkelling, at high tide, to avoid damage to both the coral and your knee and elbow skin – in waters populated by turtles, black tip sharks, barracudas, rays, moray eel, bump head parrot fish and peacock butterfly fish; hikes through a rainforest populated by butterflies, monitor lizards and a 2000 year-old palm; windsurfing, kayaking or paddle-boarding between the islands. There are also open-air movie nights, a wine cellar, a tennis court and a library, while the spa offerings – you get a daily treatment free of charge, astoundingly – will only improve once a new health pavilion, currently underway along with an outdoor gym, is complete.

Robinson describes the Bawah customer interface philosophy as “Service with soul”. This means that the staff, nearly all locals, are encouraged to be consummately professional but ultimately themselves: a group of idiosyncratic personalities rather than uniformed clones. The resulting staff culture is attentive, but never obsequious: congenial, authentic, real. Which, you realise having been here a few days, neatly personifies this entire place.