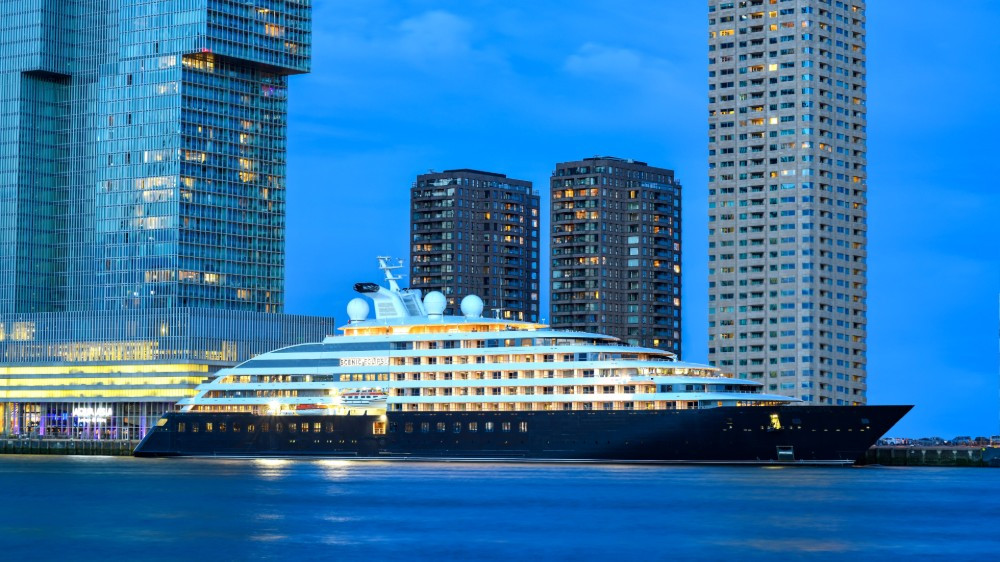 Inside the ‘Scenic Eclipse,’ the World’s Most Luxurious Expedition Megayacht

Referred to as a “discovery yacht,” the cutting-edge boat features its own helicopters, a fleet of Zodiac boats, a submarine and a near-endless list of high-end amenities.

There’s no reason why scientific discovery and luxury have to be mutually exclusive. That’s the thinking of Scenic Luxury Cruises & Tours, whose just-launched expedition cruise ship, Scenic Eclipse, attempts to wed the two in one massive, 551-foot megayacht.

After years of delays, the 228-passenger ship finally launched last month and was christened by Dame Helen Mirren in New York on Tuesday. Referred to by Scenic as a “discovery yacht,” the cutting-edge boat features its own helicopters, a fleet of Zodiac boats, a submarine and a near-endless list of high-end amenities, all of which help it set a new high-end standard for expedition-style travel. It will travel to 68 ports around the world, spending half the year in Antarctica and the Arctic, the two main expedition cruise destinations.“In terms of innovation, technology and design, [Scenic Eclipse] is second to none,” the company’s chairman and founder Glen Moroney said last month. “The onboard helicopters and submarine and our handcrafted itineraries that take our guests to 38 countries in some of the world’s most stunning and remote locations.”

And it would appear that no expense was spared to take ocean exploration to the next level. For instance, the boat boasts 114 cabins, each of which is a sizable suite—including a living room, veranda and a butler service. The $10,000-per-night, two-bedroom Owner’s Penthouse Suite reportedly measures a staggering 2,659 square feet. Spa suites, meanwhile, include a double-sized Philippe Starck-designed jacuzzi, steam shower and light therapy.

The luxury doesn’t stop inside the rooms, either. The Scenic Eclipse features 10 different restaurants—with cuisines ranging from French to Japanese—overseen by executive chef Tom Goetter. There are also eight bars, one of which serves over 100 top-shelf varieties of whiskey. If you’re an aspiring chef yourself, the yacht boasts a cooking classroom, where guests can learn how to make the delicious dishes they’ve eaten. A built-in theatre offers films and lectures. There’s also plenty of beauty and health amenities, like the 5,920-square-foot Senses Spa, which includes Scandanavian-style pools, a gym and a Pilates studio, as well as a hair salon.

In addition to the onboard amenities, the yacht will also actively help you explore the areas away from it. The Scenic Eclipse includes two six-passenger helicopters, a first for an expedition cruise ship, and a fleet of Zodiac boats for adventuring. There’s also a six-passenger submarine, the Scenic Neptune, that can reach depths of 1,000 feet. And because this is an expedition cruise ship, it was built to withstand the elements. It holds the preeminent ice-class rating for a passenger vessel, Polar Class 6, which means passengers have nothing to worry about during voyages in Antarctica and the Arctic.With all these luxury and technology features, it’s easy to see why a trip on the Scenic Eclipse doesn’t come cheap.

Fares start at at $6,395 per person based on a double occupancy, though polar expeditions can cost much more. But that fare does come with a lot, including air travel, pre-departure hotel, all meals and drinks. Helicopter and submarine rides, of course, are extra.Check out more photos of the Scenic Eclipse below: