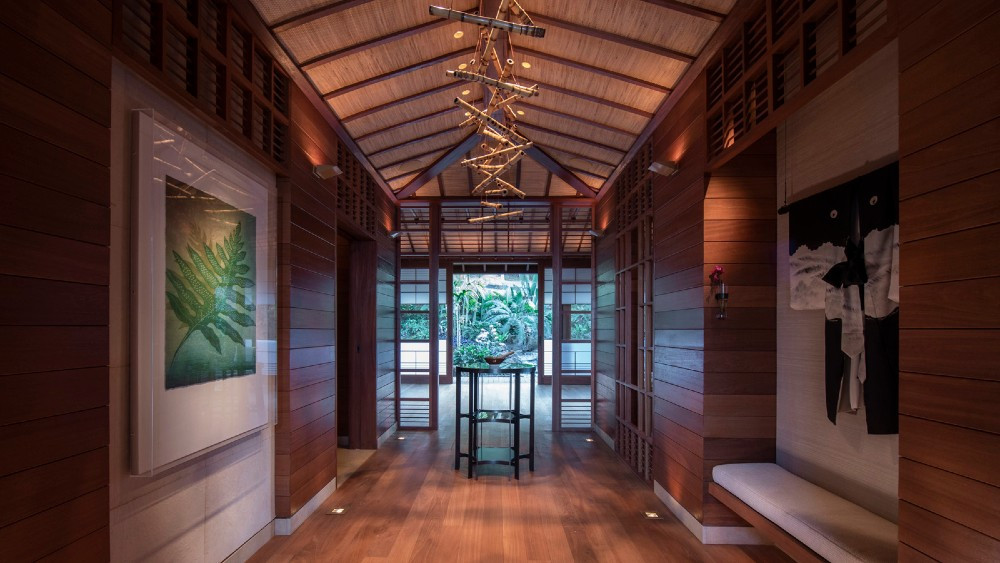 Tech billionaire owner Larry Ellison has re-imagined The Lodge at Koele as a hub for his well-being company, Sensei, complete with a brand-new dining concept from Nobu

When Oracle co-founder Larry Ellison purchased 98 per cent of the Hawaiian island of Lanai back in 2012 (for a reported US$300 million), he did so with plans for both transforming the tropical haven and helping to preserve its unique, laid-back charm. In the years since, his vision has come to life via things like improved air service to the destination, and several upgrades to the coastal Four Seasons Resort Lanai—one of two Four Seasons properties on the island, both of which Ellison also owns. Now, on November 1st, after a multi-year closure and renovation, the second hotel is re-launching, too—this time as Four Seasons’ first-ever adults-only wellness retreat.

A bedroom at the re-imagined retreat Photo: Courtesy of Four Seasons

Set in Lanai’s interior, surrounded by towering pine and banyan trees, Four Seasons Hotel Lanai at Koele, A Sensei Retreat has been re-envisioned by designer Todd-Avery Lenahan of TAL-Studio to feature 96 guests rooms and suites, a central Great Room, a Sensei by Nobu restaurant (a new concept from the celebrated chef), an extensive spa and wellness facility with 10 private spa hales, and public spaces dotted with commissioned works of art. Conceptually, the new hotel was created in conjunction with Sensei, a well-being company founded by Ellison and Dr David Agus, who share a passion for preventive healthcare. As Dr Agus explains, Sensei’s goal is to “help people address the gap between their wellness intentions and daily practices,” so this new retreat provides a place in which “to work towards balance, health and well-being with the support of a dedicated, data-driven wellness team.”

A serene space at the new hotel Photo: Courtesy of Four Seasons

Upon booking an all-inclusive retreat (which start at a minimum of three nights), guests will be matched with their own Sensei Guide, who will help customise their itinerary along with a team of nutritionists, chefs, and experts in wellness, fitness, and spa therapies who will draw from both traditional and high-tech methods. Whether you’ve come just to relax or with a specific wellness goal in mind, activities might include private training sessions and group fitness classes, dips in the onsen-style baths or the outdoor pool, spa treatments, lectures, philanthropic endeavours, zip-lining, rope course challenges, and rounds on the 18-hole short golf course. Guests can also enjoy a range of off-property activities managed by Four Seasons, such as horseback riding, archery, clay shooting, and ocean sports.

In between, enjoy meals from Sensei by Nobu, for which Chef Nobu Matsuhisa has developed dishes using a science-driven approach to diet and full-body health; most will be crafted using ingredients from Sensei’s on-island sustainable farm. Meals and refreshments can be taken on your room’s lanai, in a private spa hale, poolside, or elsewhere on the serene property—because while the hotel is all-inclusive, it’s still a Four Seasons, after all. Retreats are now available to book starting November 1. All-inclusive rates include accommodations, spa and wellness programming, meals, select island activities, and transfers between Honolulu and Lanai on Lanai Air.