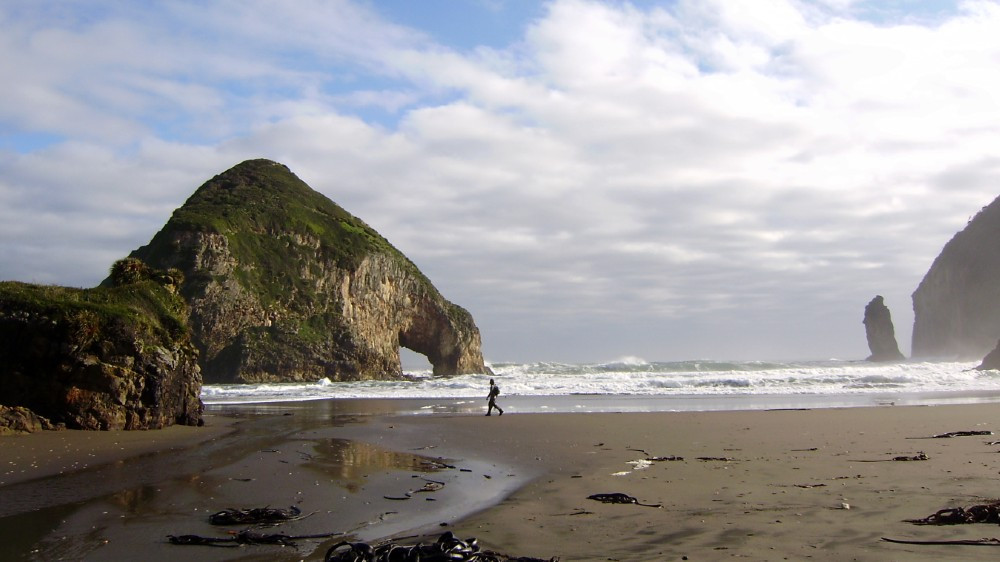 Why Your Next Island Getaway Should Be in Chile

Visit the island of Chiloé before the crowds catch on and this natural paradise loses an ounce of its traditional charm.

Sheepdogs herding their flocks while cows graze nearby and blue waters shimmer in the distance is the default setting on the island of Chiloé, one of Chile’s best-kept secrets. Whether you come to the pastoral, 3,000-square-mile island for the serene nature, the fresh food, the colourful culture or just to relax with a glass of Chilean wine in hand. Chiloé is an escape for travellers looking for something untouched by the masses—and something uniquely Chilean.

A two-hour flight from Santiago, or a port stop with a cruise company like Hurtigruten, lands you in the capital of Castro, a 41,000-resident city where the food markets overflow with local cheeses, 300 varieties of potatoes, smoked mussels harvested from the nearby waters and handmade wool socks for the chilly nights. A 30-minute scenic drive from Castro brings you to Tierra Chiloé, the island’s premier hotel, which offers a diverse variety of activities included in each stay.

Tierre Chiloe is the top hotel on the island Photo: Courtesy Tierra Chiloe

In the morning, guests can go horseback riding, then follow that up with kayaking in the afternoon, just steps from their room on the bay. Bird watchers should bring their binoculars and walk the resort’s trail, stopping at benches set up for eagle-eyed spotters looking for Chilean flamingos and Hudsonian Godwit on the protected Pullao Wetland; a resort guide will even accompany guests to help identify them. The island is also known for its lush and wide array of flora, something Darwin studied on the archipelago in 1834. Take one of the dozens of marked hikes to spot bamboo and cinnamon trees, or have the local guides from Tierra Chiloé lead you through the Bosquepiedra Private Park to explore the evergreen forest, and to Ahuenco Park along the Pacific Ocean to see the island’s two major penguin species.

Some of the traditional palafitos are now boutique hotels or restaurants Photo: Courtesy Tierra Chiloe

The traditions of ancient Chiloéans are still alive in the food, architecture and way of life on the island. One of Chiloé’s most notable attractions are its palafitos—colourful houses resting on stilts in the water. There are several throughout Castro, with the most photographed being along the Fiordo de Castro Bay. Today, many have been transformed into boutique hotels, and one even serves as a cevichería.

Another must-see are the island’s 16 UNESCO World Heritage churches, which were built by Jesuit priests. The churches are scattered throughout the archipelago, with several near the capital of Castro, and their design reflects a combination of indigenous Huilliche techniques; most feature shingled wood and some, like The Church of Santa María de Loreto in Achao, were assembled without nails. Tierra Chiloé offers a day excursion on a luxury boat to take you to the nearby island of Chelín and up to the bell tower of one of these protected churches, for a more close-up look.

Guests at Tierra Chiloe will also find local touches in their rooms, including complimentary hand-knit slippers. The spacious, wood-clad suites also come with sweeping ocean views and soaking tubs. Rates for suites start at around A$2900 for a two-night minimum, including airport transfers, all meals, open bar, and guided excursions.