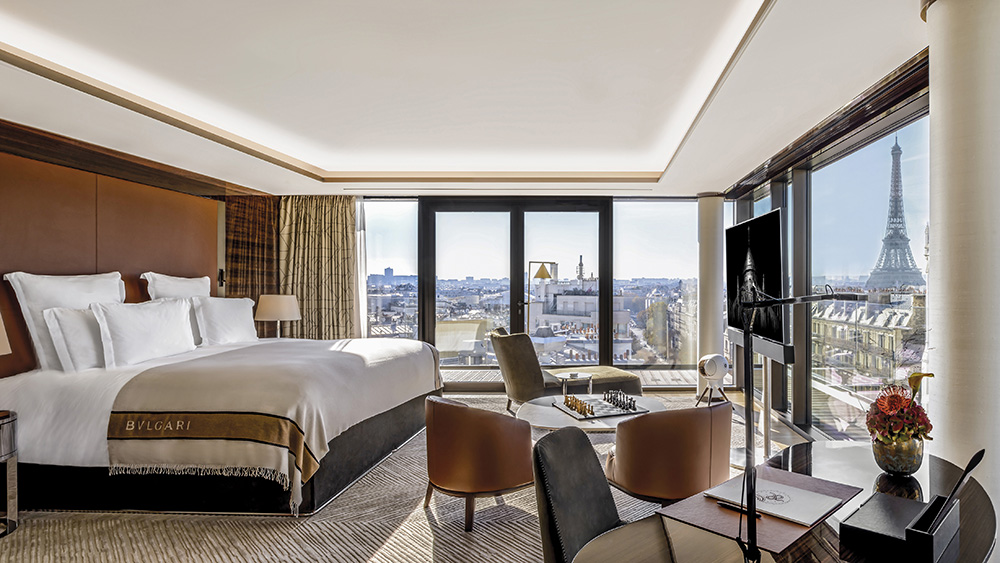 Inside The New Bulgari Hotel Paris

The Italian label gets intimate with French luxury.

When the bellman at the new Bulgari Hotel in Paris brought my luggage up at the beginning of a recent stay, he asked me what I thought of the place. After I told him I found it quite stylish, he replied, “It’s Italian style,” and then, without missing a beat, “A blend of French and Italian style.”

Such a mélange is at the heart of the company’s efforts to make a meaningful statement in the capital of French luxury; its new hotel here, located on Avenue George V, officially opens on December 2. And while the modernist aesthetic of Bulgari’s other properties might seem like an easy foil to the gilded elegance of more established inns in the City of Lights, mixing la dolce vita and la vie en rose has been no small feat.

Bulgari spent six years converting a 10-storey corporate office into the approachable, sumptuous luxury hotel you see here. The resulting structure—a strikingly modern building designed to evoke the linear harmony of its Haussmanian neighbours, if not their high decoration—features just 76 accommodations in total, 57 of which are suites. Downstairs, there’s a subterranean spa that houses nine treatment rooms, a pool, sauna, hair salon and an outpost of London’s Workshop gym in what was once a parking garage—not that you can tell now. 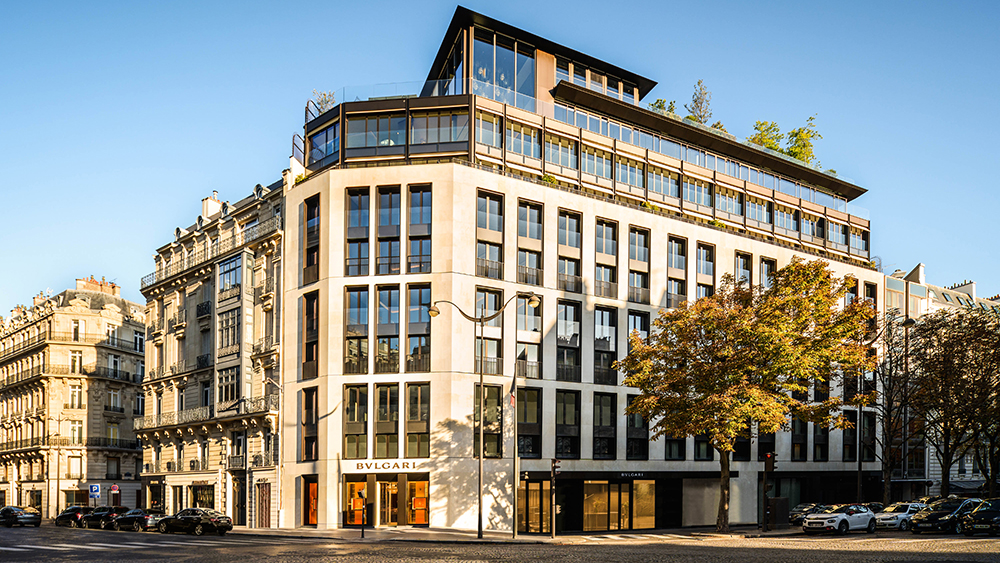 Antonio Citterio Patricia Viel, the Milanese architecture firm that designs all of Bulgari’s properties, doubled down on the lack of natural light in the ground-floor public spaces by casting the lounge and bar areas in a sultry palette. They both make for a lovely place to have a cocktail in the evening, something that’s sure to attract plenty of locals.

At the rear of the property, Il Ristorante – Niko Romito, helmed by the Michelin star-winning chef who steers restaurants at all the other Bulgari hotels, serves upgraded Italian classics alongside one or two bistro standbys like French onion soup. Its walls and ceiling are swathed in a warm saffron hue that other spaces in the hotel pick up as accents. There’s even a secret garden that can seat 40 for dinner and makes you forget you’re in the middle of one of the world’s largest cities. With its clean lines, dark wood and expanses of backlit marble, it’s not exactly the Ritz, but then, why should it be? 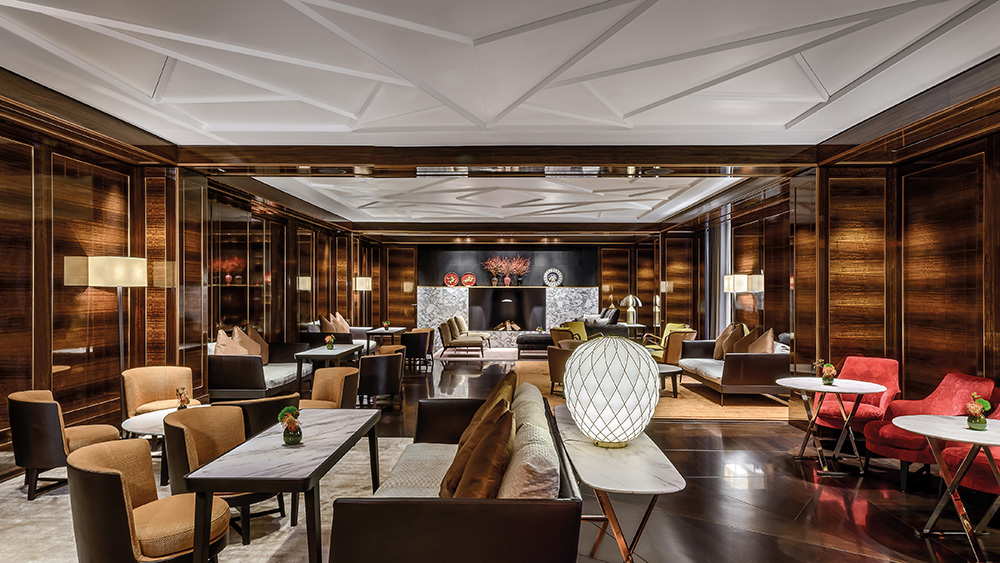 “I don’t think there’s a need for another Parisian palace,” said Patricia Viel, the CEO of ACPV, in an interview with Robb Report, referencing the vaunted French government designation for hotels that some of Bulgari’s closest neighbours have achieved (the Four Seasons George V, for example, is quite literally across the street, and the Hotel Plaza Athenee is mere minutes away on foot). “What we did is actually to surprise people with an interior that could be something different… much more private, much more residential, much more exclusive.”

Even the smallest of the rooms here are larger than you might expect, and their decor nods to both French and Italian culture and craftsmanship. All of the furniture is made in Italy, but most of the stonework and millwork comes from France. The carpets feature the herringbone pattern typically used for wood floors in Parisian homes. The walls appear to be covered in grasscloth, but it’s actually silk shantung, a material with mileage in a number of nearby haute couture ateliers. Most of the bathrooms even feature a glass art depiction of the Bulgari serpent in the style of French master Rene Lalique. 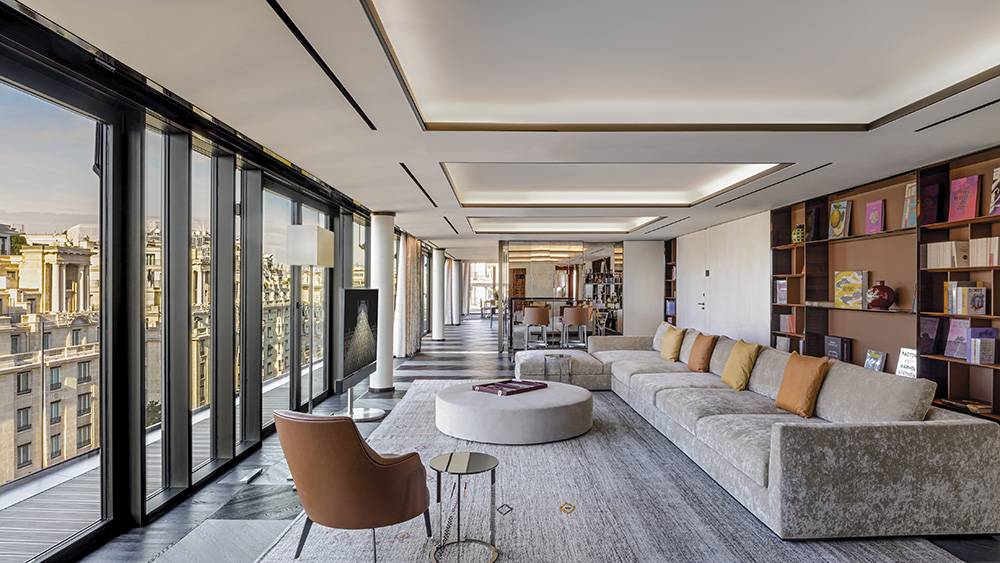 The exception is the expansive two-story penthouse suite, which offers 360-degree views of the city, including glimpses of the Eiffel Tower, Sacre Coeur and the Grand Palais. (Its bathrooms are practically drenched in marble.) The dining room can seat up to 10; scale its dramatic spiral staircase and upstairs you’ll find a lush garden planted with fruit-bearing trees.

“We were, in a way, lucky because we built it thinking that we were going to open a year and a half before now, and then Covid hit,” said Silvio Ursini, the executive vice president of Bulgari Hotels. “So all the trees had more time to grow.” 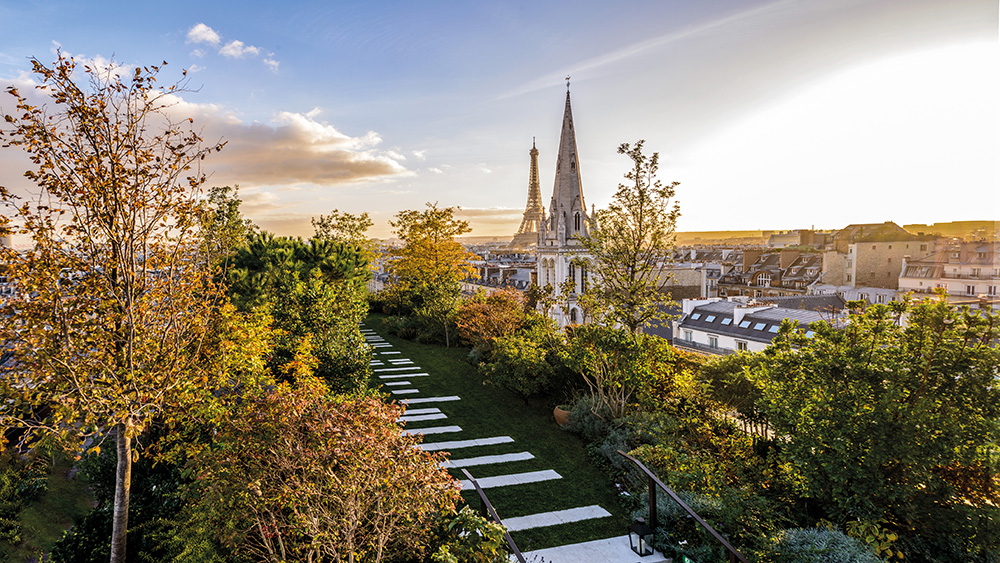 The view from the penthouse rooftop garden Tommy Picone/Bulgari Hotels

Their branches obscure the Eiffel Tower views as you enter the garden, so as you walk through it you get to discover it all over again. It’s going to be quite a sight in the springtime, but I found it just as pleasing in the fall.

The service is equally as pleasant—something that’s important to Ursini as a general practice, but especially so in what he calls one of the most challenging hotel markets in the world.

“The hotel is full of Italian staff, and this should allow us to deliver a service which is—here in France they say décontracté,” or relaxed, Ursini said. “So it’s impeccable, without any of the stiffness or pompousness that sometimes happens over here.” 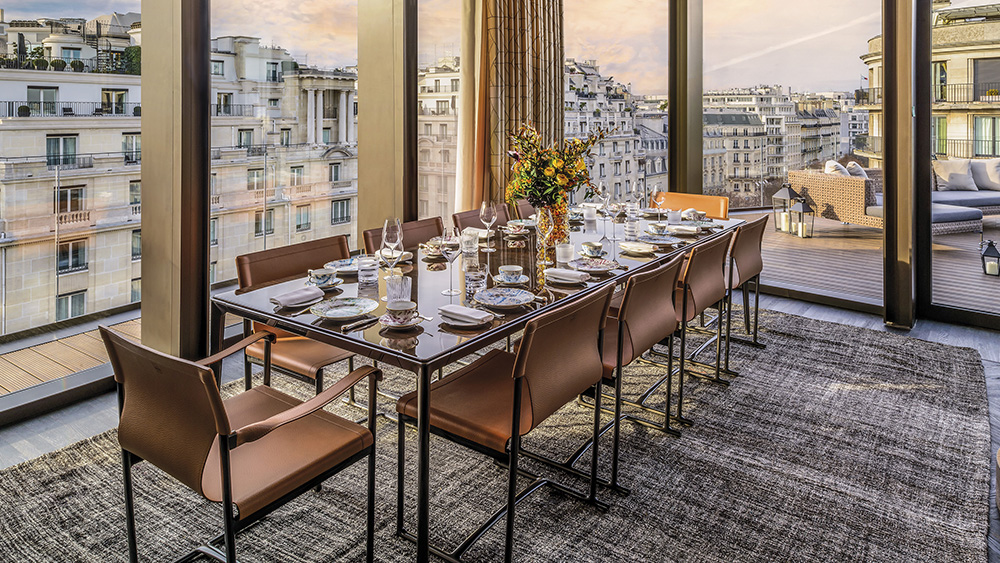 When you want to get out into the city, the concierge can arrange for a number of closed-door experiences, like a guided tour of the Rodin Museum or private shopping at Le Bon Marche. (You can also arrange for a private showing at the Bulgari boutique on the Place Vendome.) The in-room iPad control system, which you can use to turn off the lights or order room service, offers a menu of chauffeured vehicles with everything from a family-sized sprinter van to a motorcycle, if you want to see the city like a two-wheeled local. Every element of staying here has been thoroughly well-considered; you feel it in the aggregate, but it’s especially noticeable in the small details.

“I think when you put it all together: the Italian design, the Italian staff and the small size,” Ursini said. “You shake it all up, and I think the result should be very interesting.”

Check out more photos of the new hotel below: 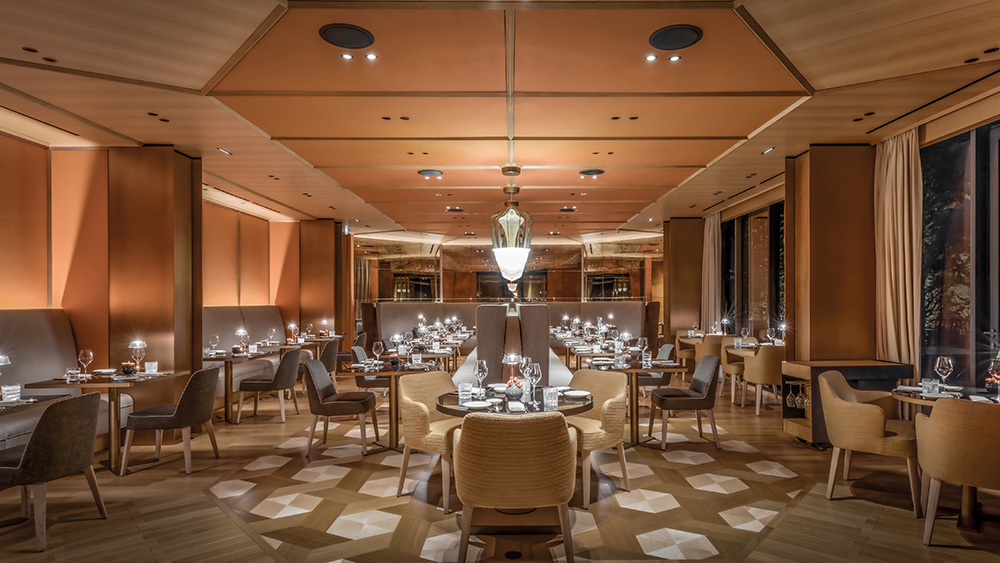 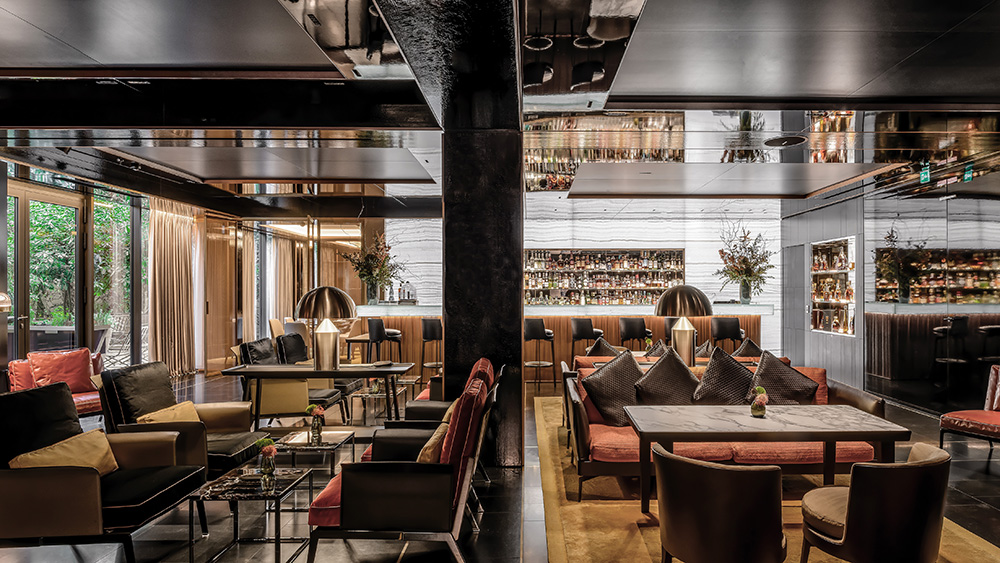 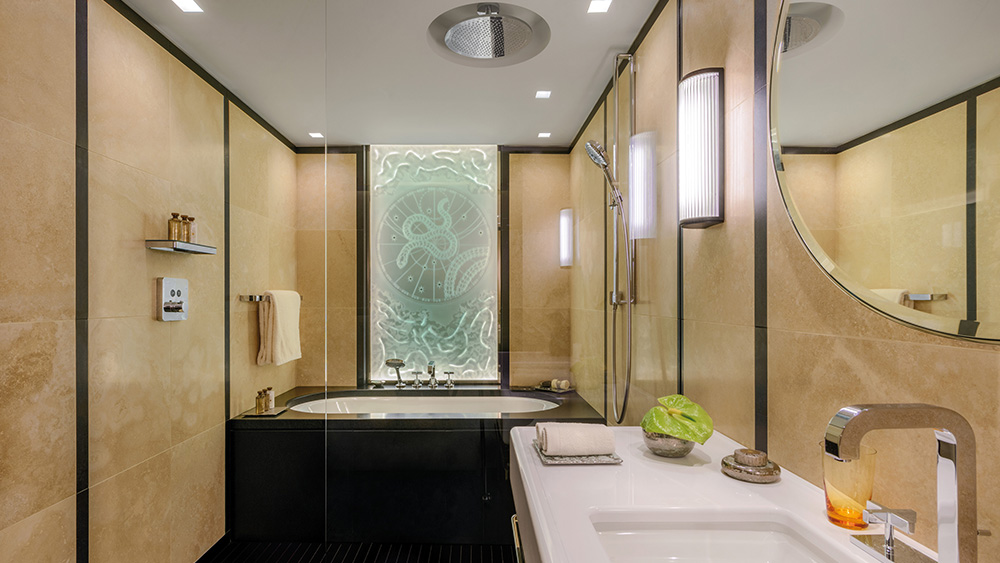 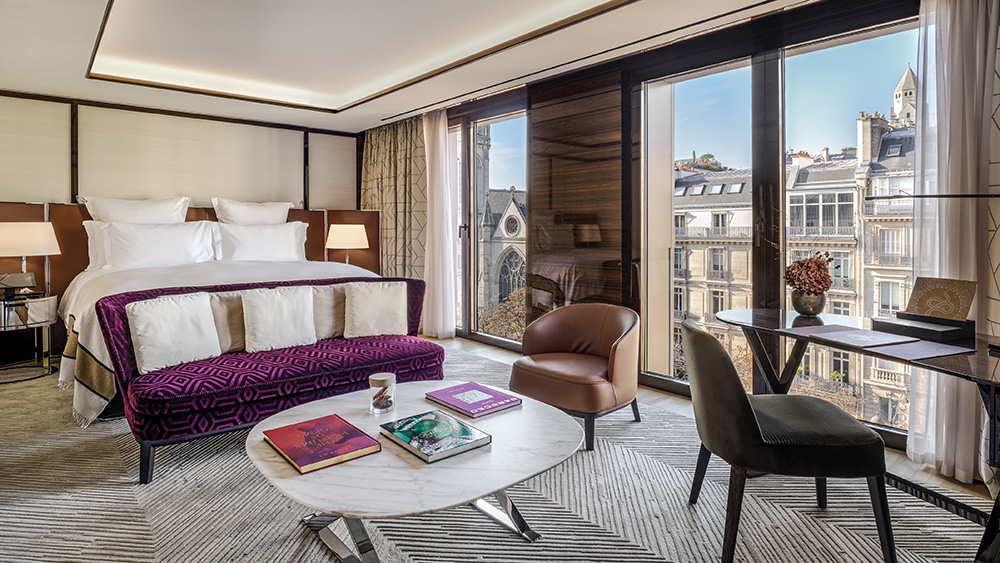 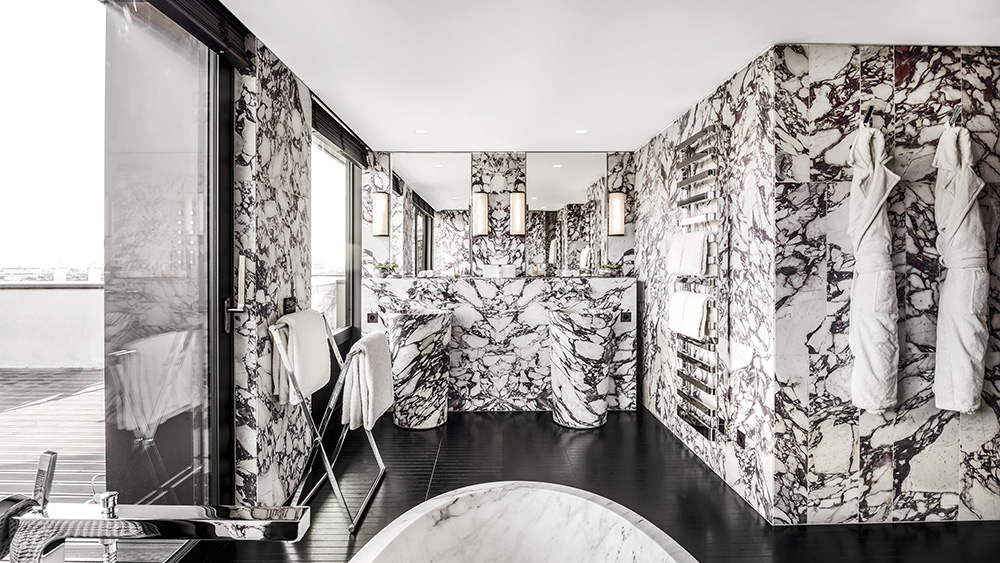 One of the penthouse bathrooms Tommy Picone/Bulgari Hotels 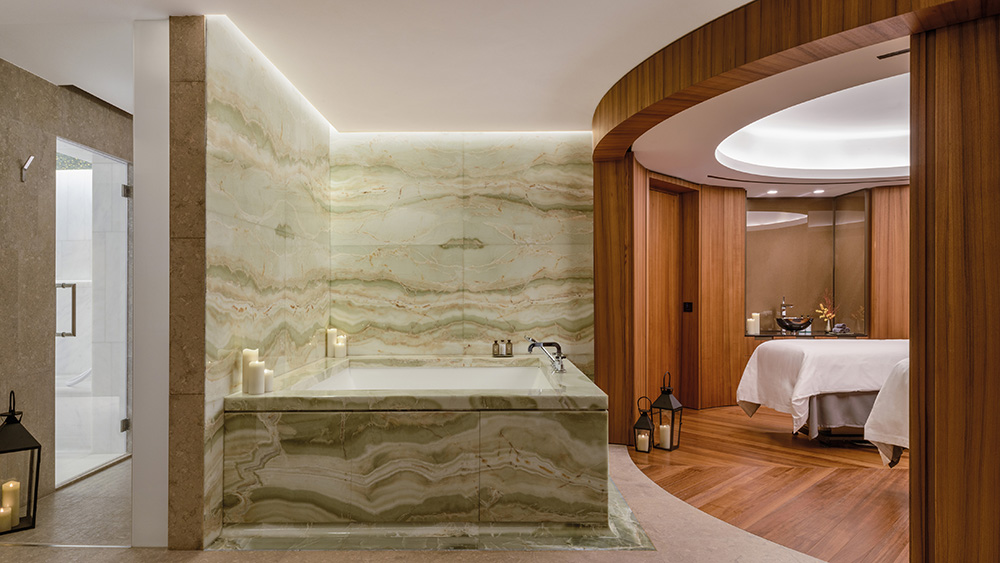 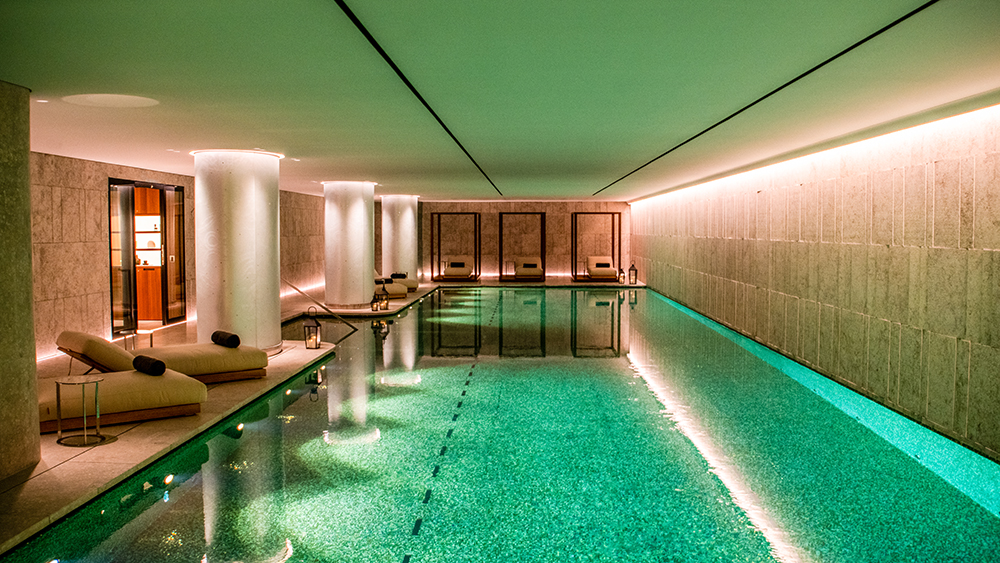