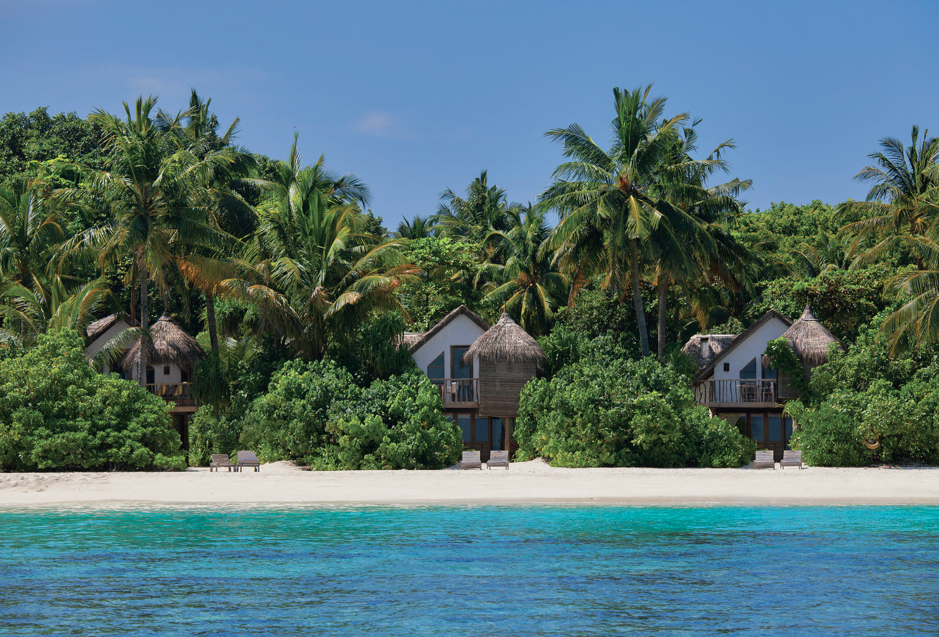 Throw Away The Distractions of Everyday Life at This Maldivian Resort

Alighting from the seaplane and stepping onboard a speedboat on the eerily blue waters of the Maldives, guests are presented with a coconut juice and kindly asked to surrender their shoes. They won’t be seeing that footwear for the duration of their stay at Soneva Fushi, in line with the ‘no news, no shoes’ policy of one of the most luxurious resorts in the archipelago of 1192 coral islands that, seen from the air, look like emerald and turquoise gemstones scattered on a bolt of indigo silk.

One doesn’t need to be a journalist to feel some apprehension at the ‘no news’ aspect, but what’s too often forgotten – but very quickly reinstated – is how profoundly satisfying and, well, grounding is the feeling of sand between one’s toes. And it turns out that ‘no news’ really is good news.

There are many such surprises in store at Soneva Fushi, which, unlike some of the glitzier Maldivian resorts, is focused on slowing down, living sustainably and enjoying the pure pleasures of nature and nurturing in tropical paradise. That’s not to say Soneva Fushi is without its luxuries: far from it, in fact. 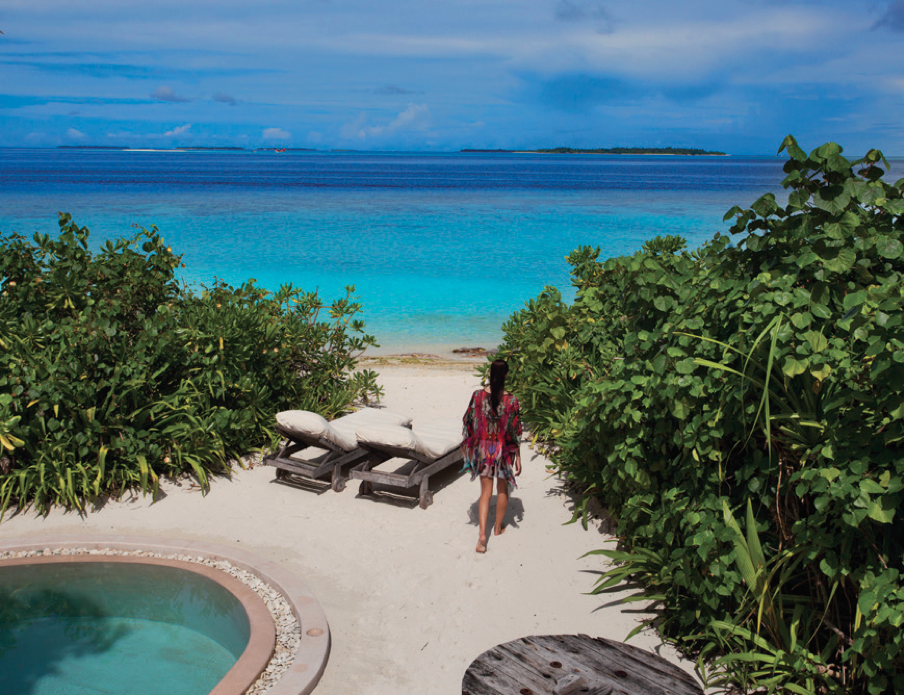 The two-level Crusoe Villa, one of 10 villa styles, has a large pool and hammock slung just metres from its own private beach, where guests can snorkel in blissful peace or simply gaze out at the glittering bands of aqua, turquoise and midnight blue. The rustic-chic rooms are equipped with the latest technology including a Bose sound system, air-conditioning and ceiling fans, but the greatest pleasures are the simple ones, such as taking an outdoor bath in the freestanding garden bathtub or lounging on a day bed on the terrace and watching the sun dip beneath the palm fronds.

At the close of the stunning Maldivian sunset, one may literally swim from villa to dinner, just a couple of hundred metres down the beach. Mihiree Mithaa is one of six restaurants on the island under the stewardship of Soneva culinary director Kevin Fawkes, formerly at Michelin-star restaurants including The Savoy in London and Noma Copenhagen. Tonight, he’s recruited Japanese chef Nikki to serve a feast of sashimi, torched wagyu, black cod and sushi, with a mindboggling choice of 250 varieties of wines in magnums, as well as an extensive selection of sakes and wines by the glass. 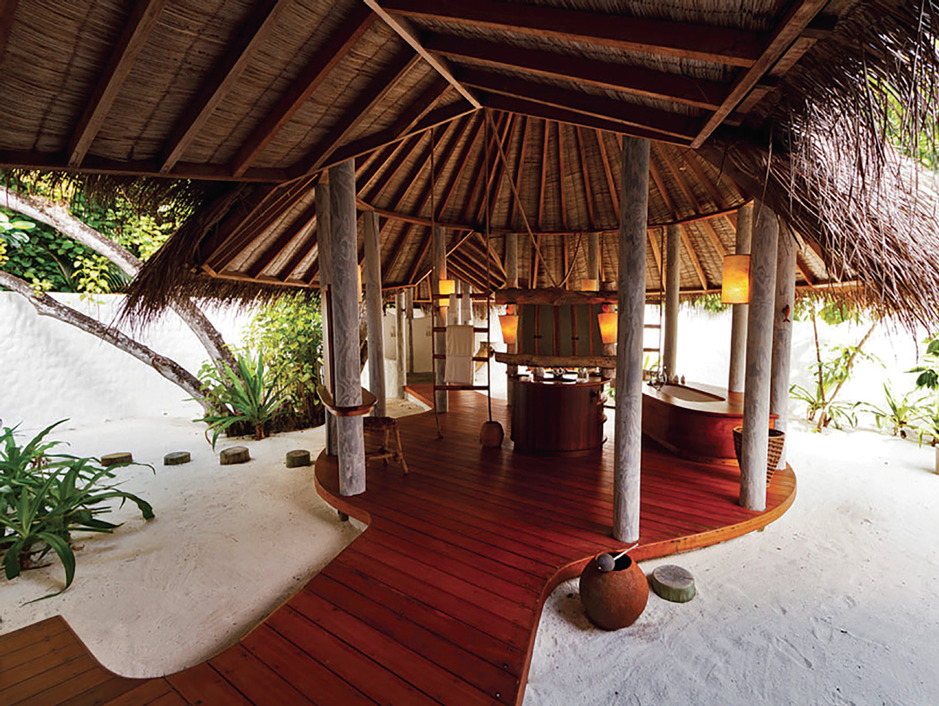 Mornings are the time to explore Soneva’s labyrinth of jungle paths by bicycle, which is almost as relaxing as a massage in the signature Six Senses spa. Home to everything from a house reef rich with marine life, an outdoor cinema, a water sports centre and an observatory where one can gaze up at Jupiter and its moons, the island is relatively large but the atmosphere is hush-hush, with 61 villas of varying sizes hidden among dense foliage on the shoreline. Each comes with a butler, going by the moniker of Mr/Ms Friday in line with the Crusoe castaway theme, and they’re on hand to organise diversions such as a snorkelling tour with the resident marine biologist. This entails a speedboat ride of about 20 minutes to a reef amid the Baa Atoll UNESCO Biosphere Reserve in a pristine part of the Indian Ocean, where guests can count on seeing sea turtles, rainbow-hued parrot fish, spotted sweetlips, blue surgeonfish and swooping manta rays.

Naturally, one’s interests extend to food and fauna, as well as fish. Soneva guests complete an extensive list of preferences on check-in, which allows the butlers to magic up all kinds of wonderful surprises, such as private lunches in the vegetable garden where the resort grows its own produce. Under the shade of lush banyan trees is served a delicious buffet of Sri Lankan curries and salads featuring lemongrass, dill, holy basil and more herbs freshly plucked from the earth.

The resort grows its own vegetables in a bid to be carbon free, manages its waste through an extensive recycling plant on the island and offsets carbon emissions through a wind turbine project in India. A glass-blowing studio creates objects and art works from the resort’s glass bottle waste and the Soneva Foundation has also funded global projects including providing more than 12,000 cooking stoves in rural Myanmar and a reforestation project to plant 500,000 trees in Northern Thailand. It’s all part of Soneva founders Sonu and wife Eva Shivdasani’s vision for sustainable tourism, born of a belief that luxury travel and environmental responsibility can co-exist. 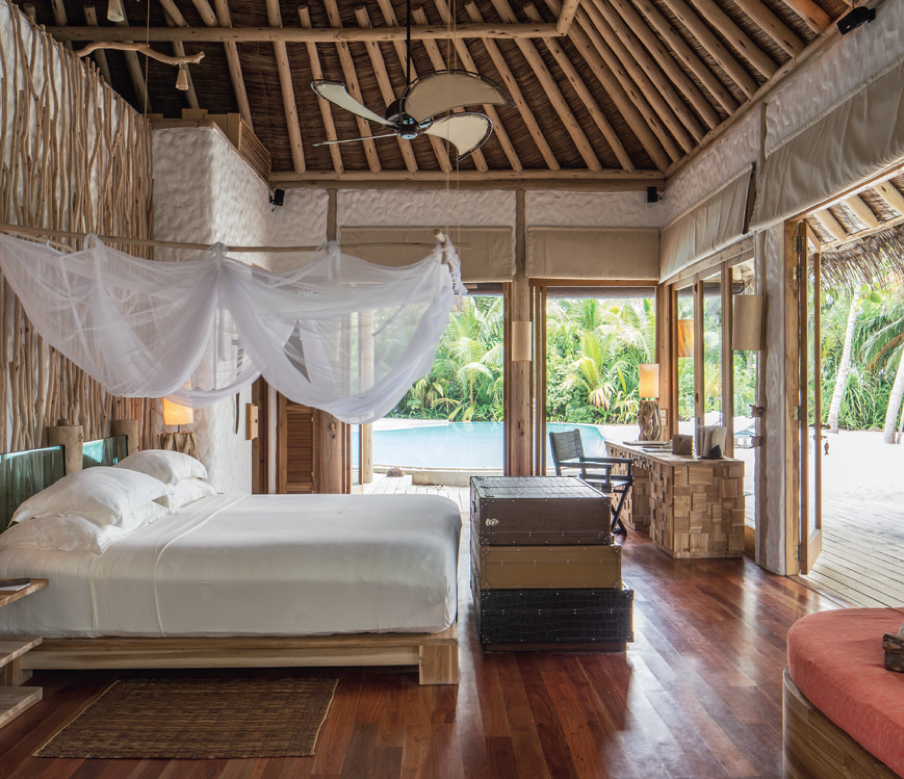 “We wanted to develop a resort that would satisfy our desires for a dream destination for those who liked to travel in luxurious style and we both had an overwhelming desire to protect the environment,” says Sonu.

The Indian-British hotelier was the founder and former CEO of the Six Senses Resorts & Spas across Southeast Asia and Europe, which he sold in 2012 to focus on the Soneva brand of luxury eco-tourism, which includes Soneva Fushi and the over-water resort Soneva Jani in the Maldives, Soneva Kiri in Thailand and a yacht called Soneva in Aqua, which sails around the Maldives.

“The major challenge we had was that people couldn’t understand how we could open an ultra-luxury resort that was also sustainable,” says Sonu. “But that is changing now and I have seen a huge growth with the eco-tourism luxury segment in the past few years.”

Enjoying a dinner of sustainable seafood and salads on a secluded beach with the sand between one’s toes, it’s easy to see why. If true luxury is time to unwind, reflect and rejuvenate, Soneva has it in spades.