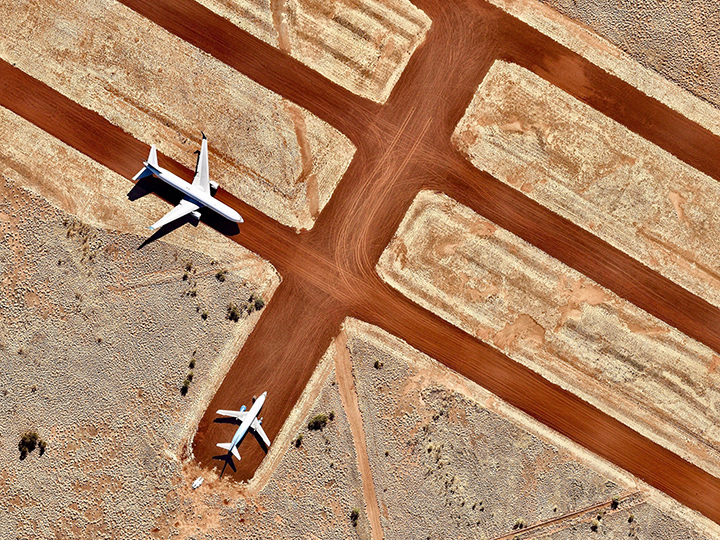 These photos show Australia like you’ve never seen it before

An Australian imagery company has celebrated an anniversary with the release of a never-before-seen series of perspective-changing images.

Perspective is a wonderful thing – an outback airport seen from ground level just looks like a bunch of planes on a dusty tarmac; a dam is an unremarkable puddle in a parched landscape; a marina a mere collection of boats.

But viewed from directly above, everything changes. Wonderful patterns become apparent, obscure symmetry emerges and without the horizon as a reference point, reality can skew.

Australian aerial imagery company Nearmap has been photographing Australia from above for 10 years, its core business to provide high-resolution aerial imagery for businesses and government agencies.

Along the way, though, it has also captured some breathtaking views, many bringing startling new perspective to landscapes that you might drive past without a second thought.

Nearmap CEO Rob Newman says it’s not difficult to make Australia look good on film but capturing aerial imagery is “something special”.
“It unveils the entirety of our natural scenery in intricate and incredible detail and truly shows the diversity of our unique landscapes to reveal the very best Australia has to offer,” Newman says.

Here are 10 views of Australia provided by Nearmap that – unless you’re an incredibly attentive frequent flyer – you probably haven’t seen before. Alice Springs is a thriving regional hub with regular air service connecting to its capital through Alice Springs Airport. The waterways of Runaway Bay on the Gold Coast are an ideal fishing location for dropping your fishing line into a calm water estuary. One of Western Australia’s famous gold and nickel mining regions, Laverton is situated in the Goldfields-Esperance area and is home to two major open-pit gold mines. Broome is home to incredible white sand beaches and some of the largest pearls in the world, as well as being one of WA’s most scenic holiday hubs. The bayside suburb of St Kilda is home to the St Kilda Marina, one of Melbourne’s largest marina facilities, hosting up to 500 vessels. Woodvale in central Victoria is a rural community with a rich history dating back to the gold rush era. Broken Hill in outback NSW has a solar farm the size of London’s Hyde Park. One of the largest in the Southern Hemisphere, it sends enough electricity to the national grid to power 17,000 homes a year. Located in Newcastle, Kooragang is known for its coal export port and wind turbine, the latter generating enough power for 150 homes per year. Dry Creek, north of Adelaide, is mostly an industrial suburb and has a series of salt pans sporting a pink hue. Boyne Island on the Central Queensland Coast is home to the largest aluminium smelter in the Southern Hemisphere.

All images courtesy of Nearmap

Walk On The Wild Side In Tasmania

Is this the best place for a reset in these COVID times?