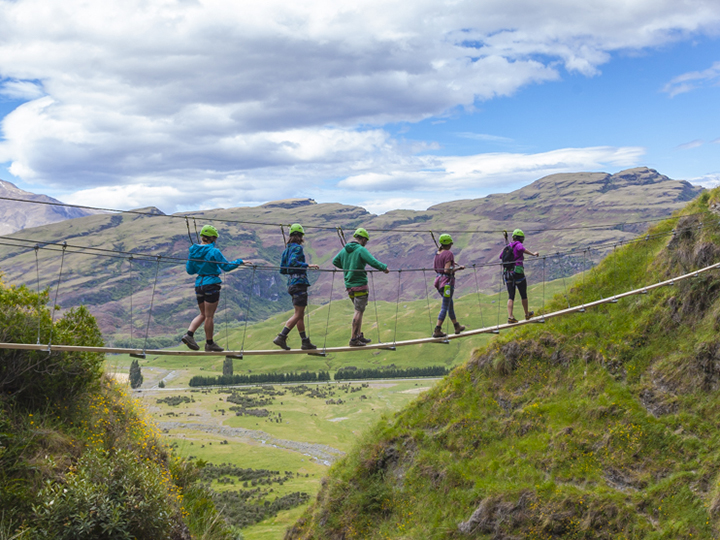 There’s much more than simply skifields to explore in one of New Zealand’s centres of adventure – and beauty.

Visitors to Queenstown, New Zealand, know that the arrival by air, swooping low along a narrow arm of Laka Wakatipu, is among the most breathtaking in the world. But for spectacle and the building of anticipation, even this can be improved upon – icing the cake with a one-hour drive from Queenstown to the outdoor enthusiasts’ more intimate and authentic alternative, Wanaka.

This is a route that crosses the fabled Shotover River, then skirts Lake Hayes. At Arrow Junction, one might contemplate a detour to fill up on history (and gastronomy) at nearby Arrowtown, or on adrenaline at the Kawarau Bridge, where the world’s first commercial bungy-jumping site was established in 1988 and continues to operate. Crown Range Road climbs impressively through alpine country, later passing beneath Mount Cardrona and what is hailed as New Zealand’s most family-friendly ski fields. When gasps are only beginning to subside on the meandering Cardrona Valley Road, a final sleight of hand – or land – briefly withholds the unfurling of the shimmering Lake Wanaka before you.

Wanaka enjoys a geographic setting unique in the Otago region. Two glaciers converged violently at the site later known by the Maori people as Oanaka. Beneath a churning maelstrom of ice believed to have been 900 metres thick, the mountain peaks were smoothed and a lake created that is 390 metres deep; indeed, the lake floor is 20 metres below sea level.

The nearest sea is 100 kilometres to the west. Oanaka served as a stopover point on the Maoris’ trail to the west coast for greenstone, which was prized for making tools and ornaments. Even then, the lake had significance as a summer retreat for fishing.

European settlement took hold with the Otago gold rush of the 1860s and, in the 20th century, many city-dwellers built inexpensive summer cottages. Today, among the greatest of Wanaka’s treasures is its proximity (20 to 30 minutes’ drive in either direction) to the skifields of Cardrona, Snow Farm and the expert-level Treble Cone, the latter perhaps NZ’s most satisfying for truly hard-core snowhounds. Speaking of whom: Wanaka also boasts the greatest range of options for heli-skiing terrain.

However, no-one should overlook the appeal of its clearly defined seasons, with dry, warm summers in the high-20s (bringing a multitude of lake sports and golf), golden autumns and, currently, spring: potentially the best time of all.The ski season at Cardrona Alpine Resort spans June to October. It’s enhanced by snowmaking technology, but after the school holiday rush in July, the jewel of winter Wanaka sparkles anew with heavy August falls. Thus, September is the month for hitting the slopes in the morning, before exploring Wanaka’s panoply of outdoor and indoor attractions in the warmer afternoons.

In spring, anxious drivers are almost certain to avoid the hassle of fitting snow chains for the climb to Cardrona Alpine Resort. Once there, a slope-side concierge service can store skis and gear overnight; a transparent cylinder-covered Learner Conveyor serves the beginners’ slope; and new Chondolas (‘champagne gondolas’) supplement the regular lift chairs to the top of the mountain. “In September, the weather is starting to warm up, the days are longer, the trees and flowers blossoming again,” says Nick Frame, proprietor of luxury property rental agency Release Wanaka and high-end holiday ‘fixer’. “The snow can get a bit slushy in the afternoons, but that doesn’t matter so much with young kids – and there’s plenty of other things to do.”

The (often uninsulated) cottages of downtown Wanaka sit impressively easily with multi-million-dollar private estates that have sprung up around the town, many of these helping to fill Release Wanaka’s portfolio of around 50 properties. These range from three-bedroom townhouses from around NZ$800 a night, to The Dacha, a five-bedroom residence with towering views across the lake, at $8000 a night.

The June issue of Robb Report Australia profiled the stunning examples of Whare Kea Lodge, Minaret Station and Te Kahu, winner of multiple architecture awards. Each of these is available for holiday rental at typically NZ$3500-$4500 a night.

Such Wanaka havens are often owned by Australians as holiday and retirement retreats. In January of this year, US entrepreneur Peter Thiel controversially gained NZ citizenship, enabling him to purchase a 193-hectare block on Lake Wanaka’s Glendhu Bay.

The town of Wanaka (population 6500) has lost little of its innocence and authenticity. It lags well behind glitzy Queenstown (pop. 28,000) in terms of its size, shopping, dining and nightlife. But Wanaka’s waterfront is gradually developing a cuisine scene, with landmark low-key eateries like Wanaka Gourmet Kitchen, Kai Whakapai, Gin and Raspberry Bar, The White House (Dunmore St) and a cool, quirky cluster of street-food caravans on Brownston Street. There are now half a dozen boutique breweries in town. For literally laid-back entertainment, a local landmark is the wonderfully cosy Cinema Paradiso, a former church in which movie-goers slouch on rows of mismatched armchairs and sofas. Nick Frame himself is an expatriate Australian who, after an international career in construction, built a luxury home and guest lodge in Wanaka 12 years ago. The other aspect of his business is Wanaka Fixer, which in turn exposes more of the unexpected talents of this serene and apparently sleepy town.

“Our market is primarily people who are cash-rich but time-poor, so they want to arrive and hit the ground running,” he says. “We know everyone, we can find everything … At certain properties, we can land a helicopter out front, take you heli-skiing or heli-fishing, grab a few crayfish on the west coast, fly over the fjordland, have you back at the house in the afternoon with a private chef cooking the crayfish for you.“

There’s probably more people in Wanaka that have climbed Everest than any other place in the world,” Frame adds. “And if you wanted to spend a day with, say, the former US Olympic ski team coach, Greg Harrington – we can make these introductions. Then you’ve got [2014 Olympic skier] Jossi Wells and his brothers [Byron, Beau-James and Jackson] who are all professional skiers.”

It’s the presence of so many high-level climbers, skiers, mountain-bikers and multi-skilled outdoors athletes that is helping to stretch Wanaka’s tourism seasons. Just one exhilarating example lies in Wildwire Wanaka, situated near the Treble Cone skifield at Twin Falls, so named for its dual, 450 metre-tall waterfalls.

Here, world-class mountain guide Mark Morrison had the idea to construct a via ferrata – a wire cable and steel rungs embedded in the sheer rock face – to enable amateurs to safely experience the thrill of a challenging climb. The ascent, offered in three stages (the summit package is dubbed ‘Lord of the Rungs’), was constructed with the aid of a helicopter and abseiling.

“Wanaka’s a funny town,” Morrison grins, after recounting his seasons climbing in Antarctica, Canada and central Asia. “Whatever you’ve done, someone here has always done more.” Fellow Wanaka resident Guy Cotter, for one, has climbed seven 8000m-plus peaks, including four ascents on Everest.

“I had the opportunity to go [to Everest], but I got married instead,” Morrison laughs. The Wildwire climb can be done year-round. The ascent up the sheer face, with narrow suspension bridges arching over the falls, will nudge many climbers towards the edge of their comfort zones – enough that success will elicit real exhilaration and heartfelt high-fives. Thanks to the broad steel rungs and double-attachment to the steel cable, it’s as safe as can be, yet true to the rock-climbing experience.

“That’s the great thing about Wanaka and New Zealand in general,” Morrison says. “All our activities have a real authenticity, so whether you’re a billionaire or a backpacker, at the heart of it you get the same experience.”