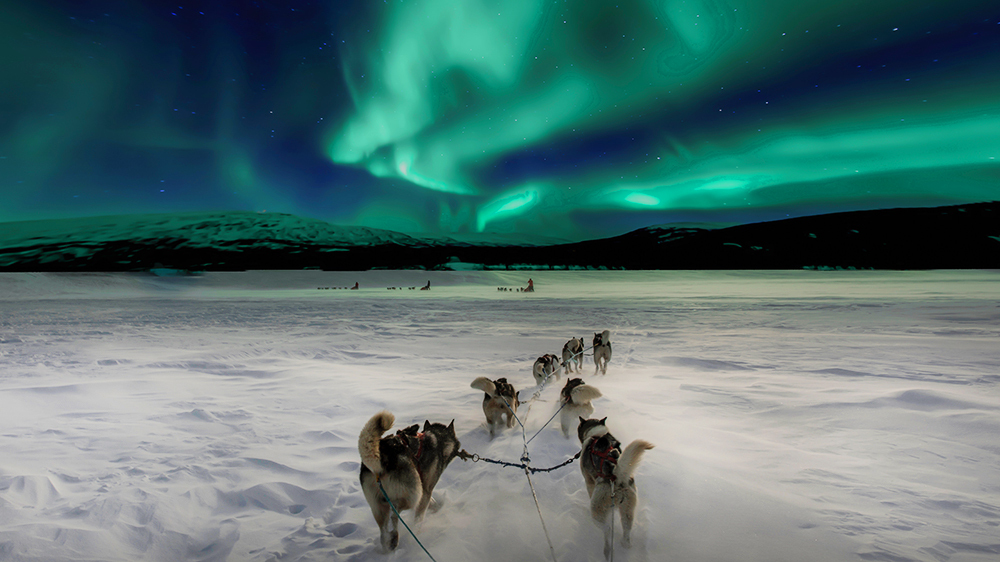 The most epic (and luxurious) ways to see the Northern Lights

Chasing the Aurora Borealis, from Iceland to Alaska and the ends of the earth.

Mother Nature is quite the artist, as is evident in her natural creations found throughout the world. Perhaps most fascinating of all her talents, though, is when she paints the Northern Lights, or Aurora Borealis, in the winter night sky.
According to the Library of Congress, the lights have been spotted since ancient times, and some of the earliest known sightings were recorded on a Babylonian tablet in the 6th century B.C. by the official astronomers of King Nebuchadnezzar II. The term Aurora Borealis, or “northern dawn,” was coined in the 1600s when Pierre Gassendi and Galileo Galilei watched the lights on September 12, 1621, according to Neil Bone, author of The Aurora: Sun-Earth Interactions.
Hundreds of years later, the phenomenon continues to fascinate us—so much so that travellers trek thousands of miles across the world to seek them out for even the briefest of glimpse. We found eight luxurious ways and places to (fingers crossed!) spot the majestic lights in all their glory. Let the light show begin…

Perhaps one of the most exclusive spots to view the Northern Lights is Sheldon Chalet, a five-bedroom luxury mountain retreat set upon two private hectares within Alaska’s Denali National Park. Fronted by the Alaska Range and within 16 kilometres of Denali’s summit, the family-run chalet is accessible only by air or helicopter service from Anchorage and nearby Talkeetna. That’s not to say you’re on your own upon arrival: An on-site concierge and guide ensure you stay active (or not), and the resident chef prepares mouth-watering meals featuring flavours of Alaska’s bounty. (Available year-round; pricing from around $3260 per person, per night.) 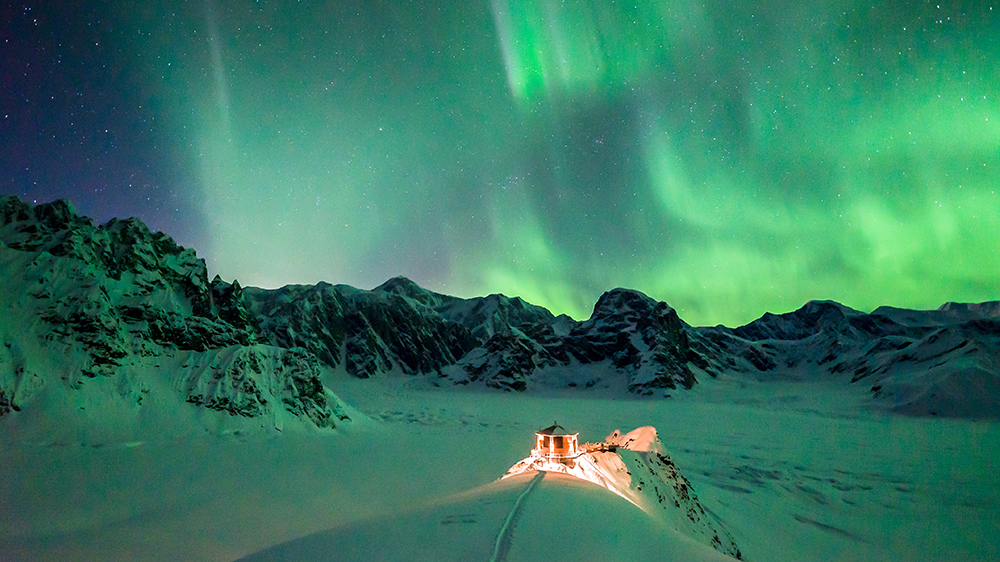 When it comes to viewing the Northern Lights, the area of Southern Iceland in which Hotel Ranga is located is considered one of the best places in the world. Fortunately, a stay at the hotel is part of the four-night Northern Lights in Iceland fully-customisable itinerary offered by Scott Dunn. In addition to watching the lights dance overhead, your time in Iceland may be spent exploring Reykjavik and the Golden Circle, as well as hiking on glaciers. (Available through March 2019, and October 2019 through March 2020; pricing begins at around $6500 per person in low season and around $7950 per person in high season.) 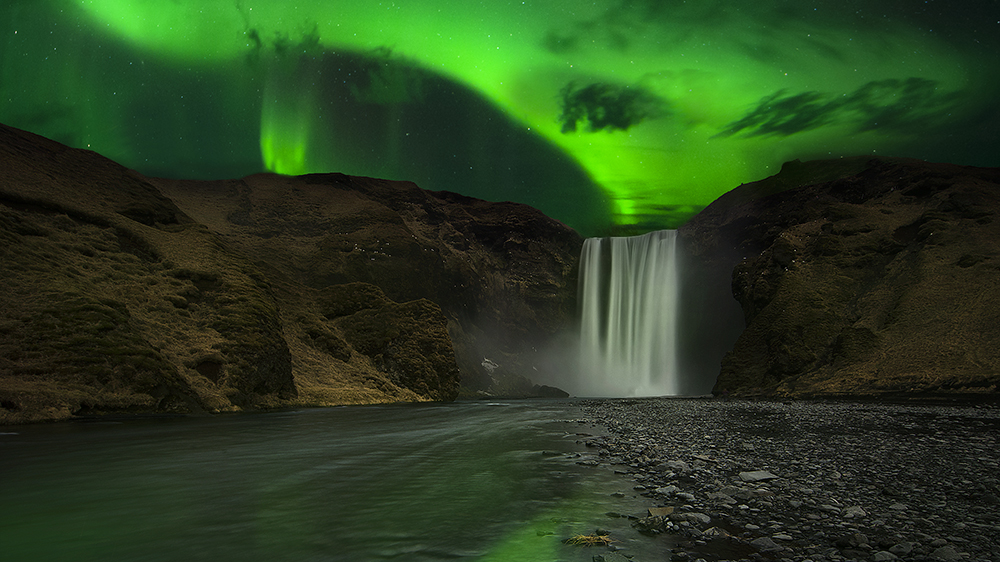 Spend time touring Tromsø, Norway and the neighboring islands of Kvaløya, Breivikeidet and the South Lyngen region by chauffeured Tesla, available to you 24/7, when you book the three-night Aurora in Bed itinerary with Off the Map Travel. When you’ve finished for the day, return to Villa Telegrafbukta for meals prepared by your own private chef. Afterwards, bundle up and snuggle in for a night of viewing the Aurora Borealis on your private rooftop balcony, complete with a king-size bed outfitted with layers of sheep’s wool, pillows and goose-down duvets. The adjoining master bedroom features floor-to-ceiling sliding windows for indoor viewings, too. (Available through March 2019, and September 2019 through March 2020; pricing begins at around $4400 per person, based on a group of six adults.) 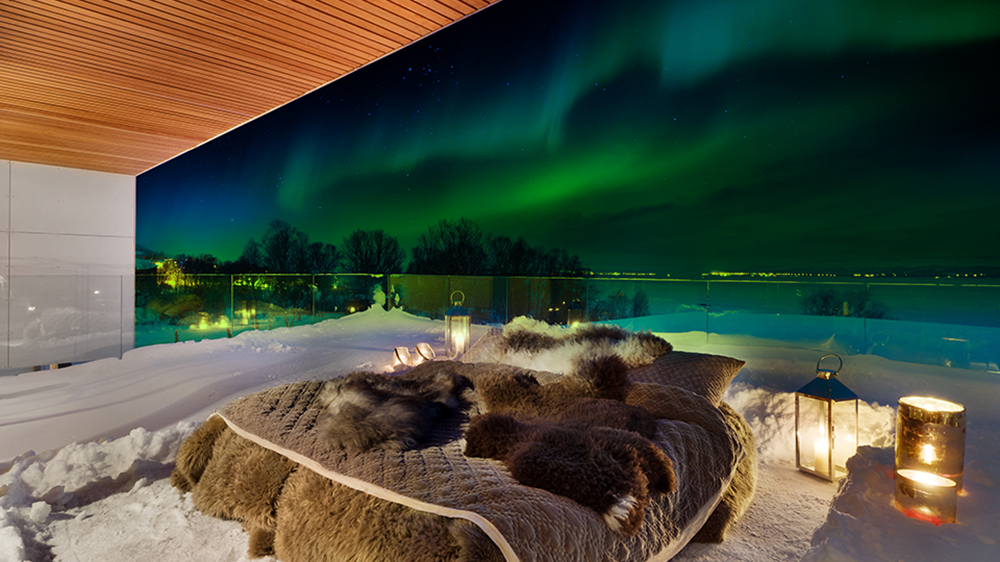 Set sail aboard a private yacht in search of the Aurora Borealis when you customise a Lofoten Islands: Ski and Sail Beneath the Northern Lights itinerary with Black Tomato. Not only will you enjoy time cruising Norway’s picturesque fjords, but carving its world-class powder slopes, too. On this trip, you’ll want to get your sea and ski legs ready. (Available through May 2019, and February through May 2020; pricing from around $10,600 per person.) 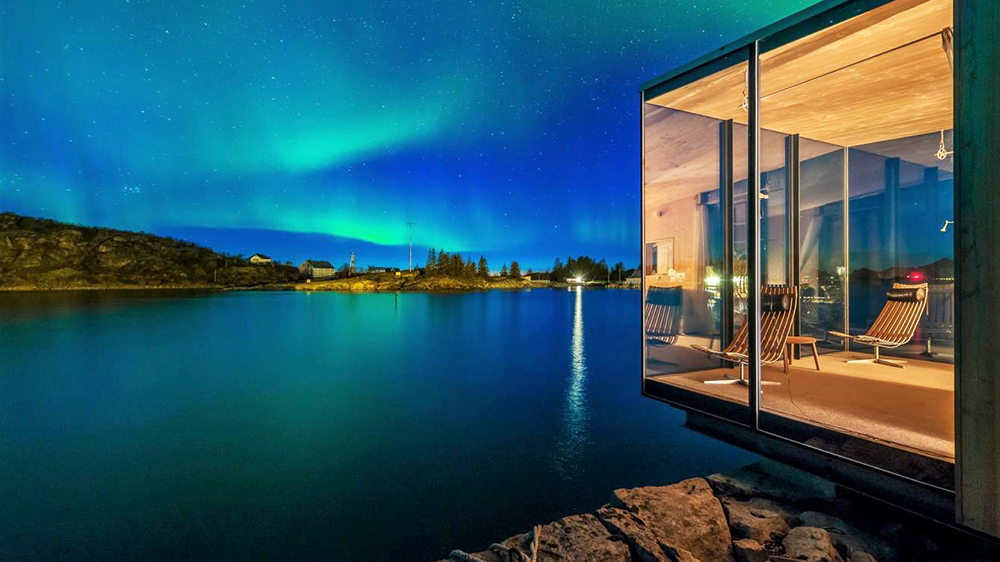 It was a small expedition hosted by Geoffrey Kent, co-founder of Abercrombie & Kent, in March 2018 that inspired the outfitter’s nine-day Northern Lights of Lapland journey. Over the course of the trip, guests travel above the Arctic Circle in search of the lights in Finnish and Swedish Lapland, as well as cruising aboard an icebreaker, try their hands at ice fishing, and enjoying some dogsledding and snowshoeing en route. (Available December 2019, and January through March 2020; pricing from around $11,900 per person.) 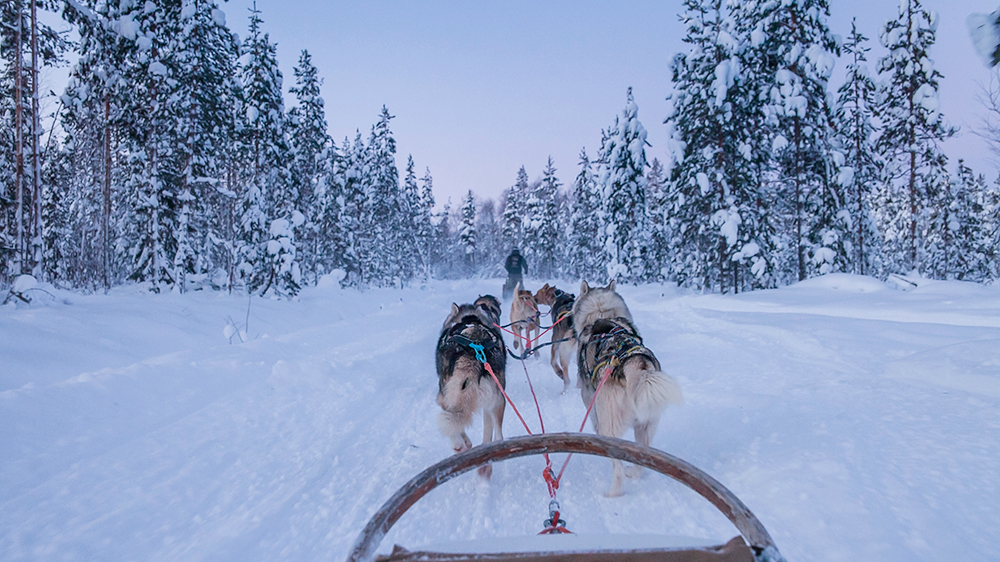 Butterfield & Robinson invites you to strap on a pair of snowshoes and seek out the Northern Lights in the Scandinavian countryside as part of its fully-customisable six-night Scandinavia Winter Journey. For more relaxed viewing experiences, you’ll also enjoy overnight stays at inspired hotels, including glass-domed igloos at Kakslauttanen Arctic Resort in Finnish Lapland, and Arctic view rooms at Santa’s Hotel Aurora in Luosto Village. (Available through March 2019, and December 2019 through March 2020; pricing begins at around $14,200 per person.) 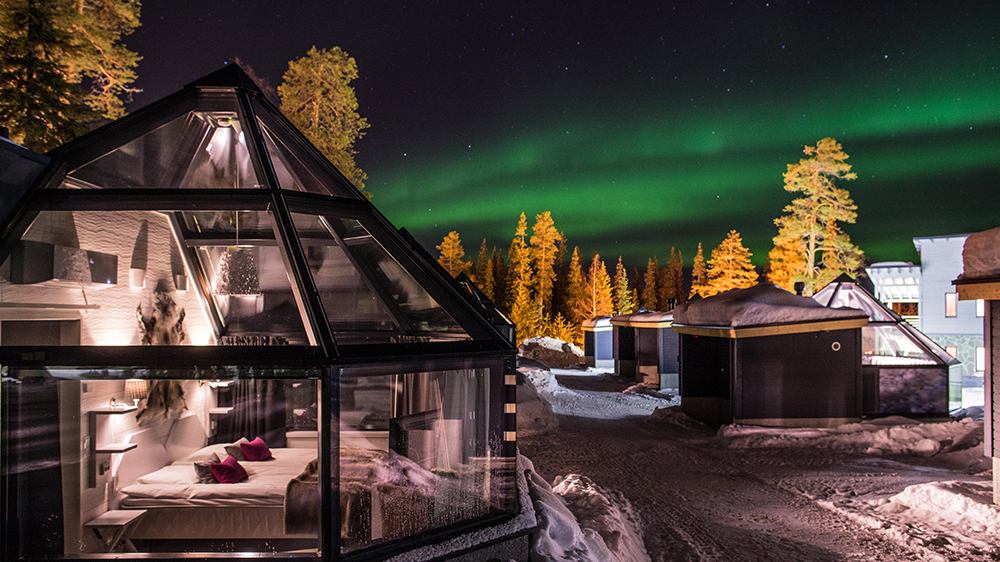 If you’d rather sit and stay awhile to watch the lights dance overhead, make reservations at the 13-room Jávri Lodge in the far north of Finland. Though its location is 240 kilometres north of the Arctic Circle, you’ll enjoy personalised concierge service to ensure your stay meets every expectation. When it comes to meals, local and organic ingredients, like fish from Lake Inari and cloudberries, are thoughtfully prepared and represent the flavours of Lapland. (Available through April 2019, and August 2019 through April 2020; pricing from round $2700 per room, per night, based on double occupancy.) 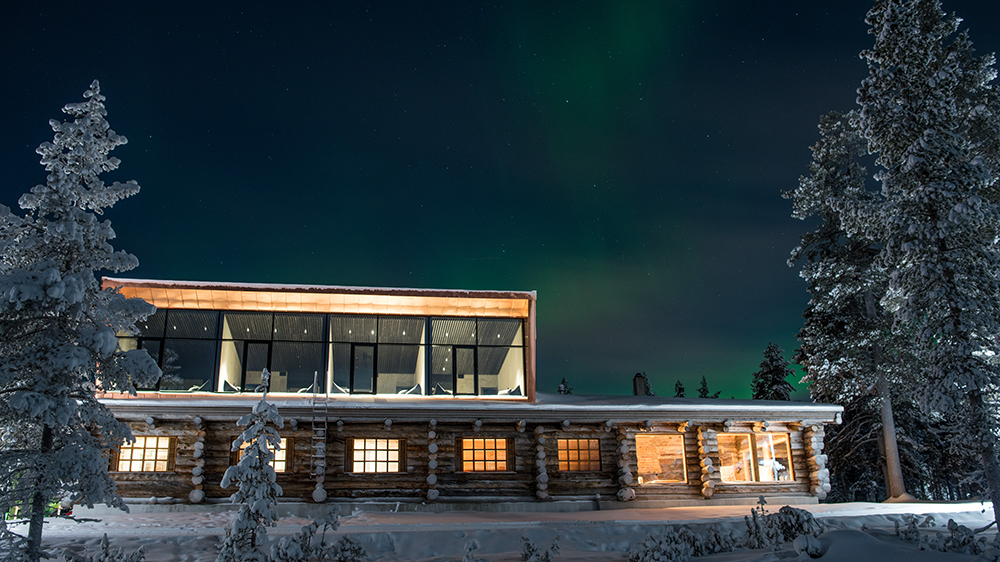 Take the reins and guide your team of reindeer through the night in search of the Northern Lights. Or watch the show surrounded by 350 huskies. You can even sail under the lights aboard a 12-passenger polar catamaran. These are all options available on Kensington Tours five-day In Search of the Northern Lights voyage through Tromsø. According to the outfitter, “Tromsø is right in the middle of the planet’s Northern Lights belt, and any flare of solar storms on the surface of the sun will be spotted here.” (Available through March 2019, and December 2019 through March 2020; pricing from around $3100 per person.) 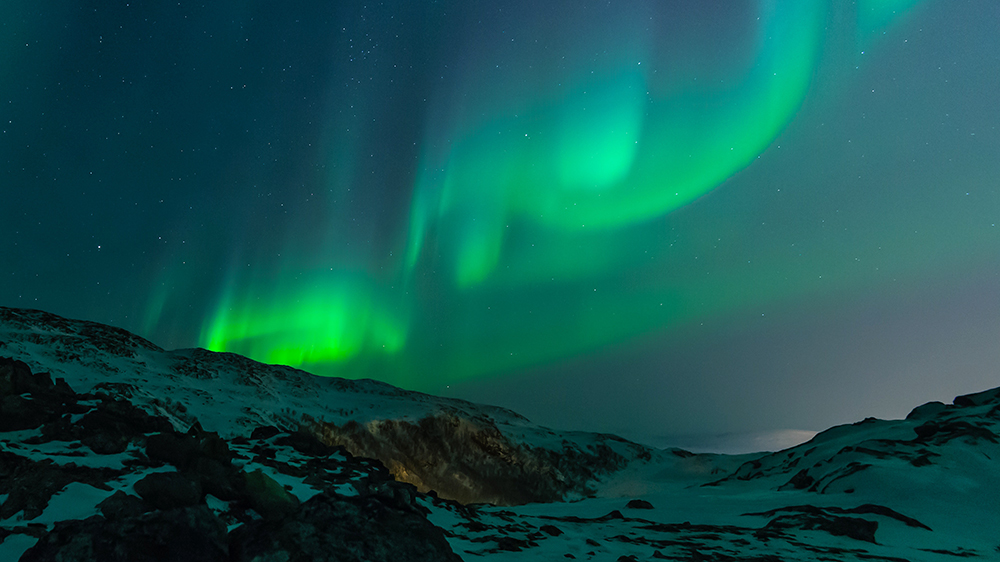