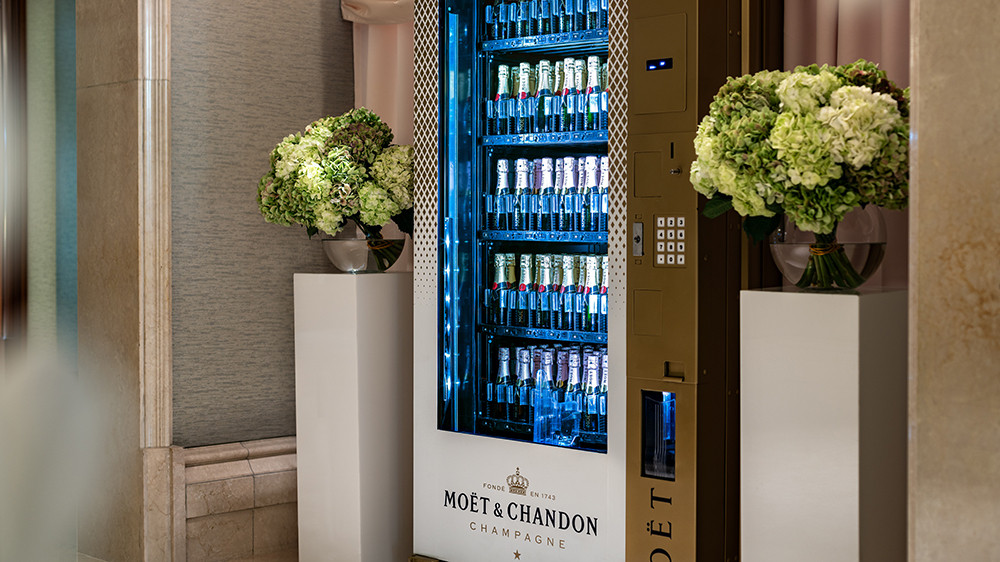 Is this the next ridiculous luxury hotel amenity?

Remember those old motel vending machines, located in some dark hallway right next to the big icemaker? This new hotel amenity isn’t that. The Ritz-Carlton, Naples in Florida recently reopened after being shuttered by 2017’s Hurricane Irma, and right there in its lobby, between plinths topped with bouquets of hydrangeas is the holy grail of vending machines: A gold-rimmed 450-kilograms-plus Moët & Chandon dispenser filled with Imperial Brut and Imperial Rosé vintages in 200 mL bottles (which measures out to just a little more than a single pour).

Guests can purchase special gold coins at the hotel’s front desk for US$25 each (around $35) to redeem in the machine. An in-house sommelier makes sure the machine is always chilled to a perfect -1 degree Celsius, and a mechanism inside ensures a soft landing for each bottle so you’ll get that perfect cork pop without any spills.

It’s a welcome addition to the standard lobby experience, but with any luck it might also be a trend we’ll be seeing more of in hotels around the world. The legend of the modern bubbly dispenser began in 2013 at the Selfridges department store in London. Introduced by Moët & Chandon for the holiday season, it held 320 mini-bottles of Champagne. A few years later, it turned up at London’s All Bar One in Leicester Square; then, in 2016, the trend made its way Stateside to the Mandarin Oriental, Las Vegas, which added one of the machines to an unassuming corner of its own lobby. (The hotel, which was known for all kinds of cool amenities, has since been reflagged as a Waldorf Astoria.)

Just a few months after the Ritz-Carlton, Naples debuted its bubbly vendor, the idea gained even more steam thanks to the tabloids: It was reported that model Chrissy Teigen and musician John Legend gave one to reality TV star Kris Jenner as a housewarming gift.

Which all begs the question: Is this about to be the next big thing in ridiculous luxury amenities? Judging by the reception of the vending machine at the Ritz-Carlton, the answer is yes. The intoxicating installation has become the hotel’s Eiffel Tower, Disneyland and Central Park all wrapped into one. Hundreds of selfies have chronicled its bubbly existence on Instagram. One guest even filed a complaint about it: “I need to talk to whoever installed this machine,” he said. “We now have 200 pictures of the machine, and I have zero pictures of the sunset and zero pictures with my wife.”