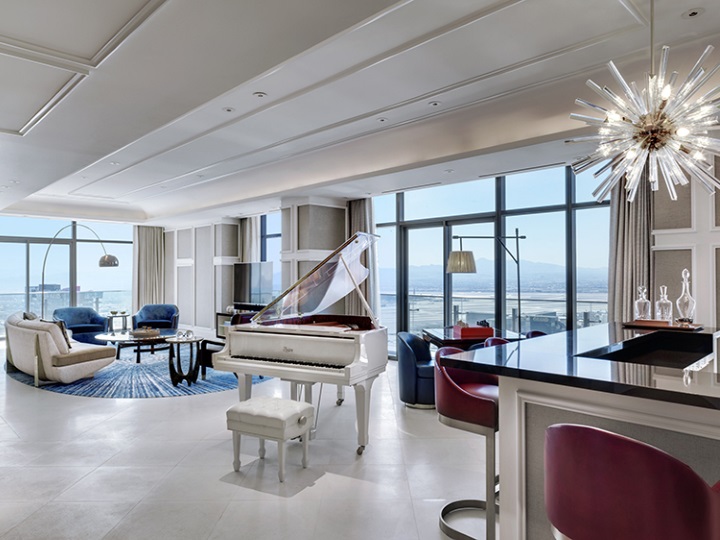 The Las Vegas suites for the highest of high rollers

Sin City luxury has reached a new high with the recently opened over-the-top suites at the Cosmopolitan of Las Vegas.

Since the Cosmopolitan of Las Vegas opened its doors in December 2010, it has been the spot to see and be seen in Sin City. Lately, the property has been undergoing some changes, with a remodelling of its seductive Chandelier Lounge and a revamp of its restaurant collection to include Los Angeles and New York City favourites such as Eggslut and Momofuku. Now, with the launch of its new Boulevard Penthouses, the property is further cementing its status as the go-to casino hotel on the Strip. Each design team brought its own inspiration. Adam D. Tihany created a penthouse for the imagined lifestyles of a "TV producer from Beverly Hills and a real-estate mogul from New York City;" Fiona Thompson of Richard International channelled "decadence, mystery, and adventure;" and Daun Curry sought to embody the "devil-may-care attitude" of Sin City. While all three firms brought distinct styles to their creations, each has clearly captured the overt opulence and flair for the dramatic of Las Vegas. Topping off the new suites is the Reserve, a private art-deco-style gaming room reserved for Boulevard guests only. Located on the 71st floor, the lounge offers complimentary cigars and top-shelf spirits like Macallan M and Louis XIII Black Pearl, as well as a Tihany-designed salon where high rollers can dine from any of the Cosmopolitan's restaurants in privacy.