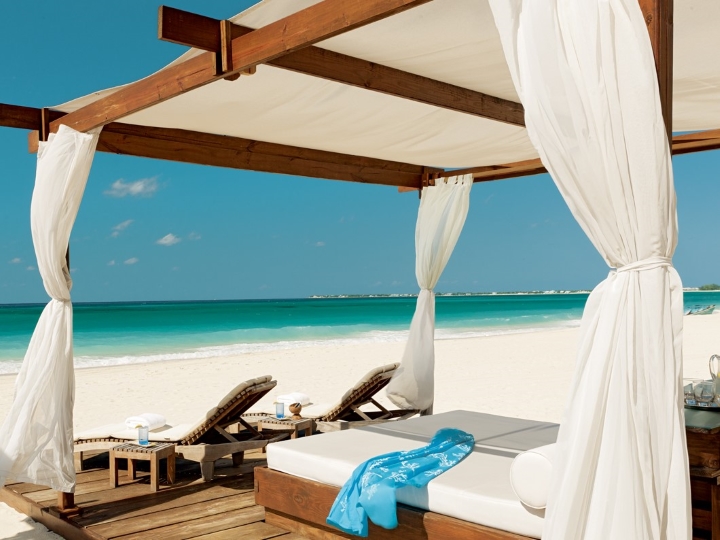 The Cayman Islands are the new crown jewel of the Caribbean

Long known primarily as a tax haven, the Caymans are emerging as the latest laidback but luxurious escape thanks to a new wave of development.

The Cayman Islands, long known primarily as a tax haven, are emerging as the latest laidback but luxurious escape thanks to a new wave of development that, more than a decade after Hurricane Ivan, includes extraordinary and distinct resorts. Within the walls of the garden, nature quietly reigns. Beyond the coiled roots of trees and tangled greenery, falling water is audible, and only the most attentive ear can discern the presence of an occasional passing automobile. Despite its primordial air, this oasis has been expensively cultivated for the pleasure of its owners, who, when in residence, occupy a villa concealed in the distance behind battalions of blossoms and imposing examples of a curious form of flora known as a sausage tree, from which depend heavy, tubular, dun-colored fruit.

“They stink when you cut them open,” notes the gardener. Adorned in a straw hat and Hawaiian shirt, this gentleman conducts me along the winding paths of this private paradise. When I ask him if it’s a native plant, he laughs. “It’s from Africa,” he replies. “I guess the hippos like them.”

Nothing, I have learned since my arrival in the Cayman Islands, seems to be from here. Uninhabited until the 17th century, when motley assortments of passengers from military, merchant, and mercenary vessels alike began to visit their shores, these minute landmasses were not properly settled until the early 1700s. Over time, the population of primarily African and Anglo-Saxon descent gradually expanded to include dozens of different nationalities. When I landed on Grand Cayman several days before, I didn’t know what to expect of my inaugural visit to this British territory famed as a tax haven and bastion of international banking. Beautiful beaches, yes, but what else?

On departing the airport, however, I was greeted by something entirely unexpected: a sense of familiarity. The streets of George Town could have belonged to a South Florida suburb, save for the fact that the drivers sat on their vehicles’ right-hand sides. Having been buffeted in flight by the winds of Hurricane Matthew, which then roared toward the United States, I was surprised by the normalcy of the scene.

“We have been lucky since Ivan,” said Marc Langevin, who greeted me at the Ritz-Carlton Grand Cayman. A Frenchman by birth, Langevin serves as general manager of the first true luxury resort on Seven Mile Beach, the island’s most popular strip of coastline.

We talked of the devastating 2004 hurricane while he escorted me to my accommodations, the 8000-square-foot Grand Cayman Penthouse. It is a three-bedroom rooftop complex that includes a screening room, a chef’s kitchen, and a breathtaking wraparound terrace with a 180-degree vista of blindingly blue water.

He described to me the impact of the storm, which had been the worst to hit the islands in more than eight decades. Though Ivan flattened or flooded most of the community’s buildings, its force was creative as well as destructive. As we stepped onto the terrace, he gestured up the beach toward a sleek, modern complex that rose in the distance above the turquoise surf. “None of this,” he said, “was here before.” The landmark Langevin indicated was the site of my afternoon appointment. Situated several miles north of the Ritz-Carlton, this is the first new luxury property to appear on the island in more than a decade — and the first of two quite distinct retreats I intended to explore. The Kimpton Seafire Resort & Spa represents an architectural departure for Grand Cayman but also stands as the vanguard of a new wave of upscale development transforming this destination into an epicentre of laidback luxury.

In the lobby I was surrounded by the sea, which sparkled in all directions like an art installation. Walls of glass allowed the scenery to provide the primary decoration, while handwoven rope accents and a blue catboat — a traditional Caymanian fishing vessel — suspended from the ceiling of the library alluded to the island’s history. I ascended to yet another penthouse, the Presidential Suite. Here, immense floor-to-ceiling windows opened to a terrace, where the sapphire water created the illusion of being aboard an ocean liner. Offered a gin and tonic, I chatted with Jackie Doak — president of Dart Real Estate, the developer of the property — and a contingent of talented people who contributed to the project.

Doak explained to me the scope of the undertaking. “There was an existing hotel here. Initially, we were going to build on that foundation, but it sat behind the coastal road,” she said, indicating a rather forlorn-looking stretch of pavement that emerged as if from nowhere beyond the lush grounds of the Seafire. “But because the road was so close to the beach, all the amenities would be behind the hotel, so we decided to demolish the existing structure.” The decision was a costly one but, in the end, worthwhile. The developers diverted the coastal road to the other side of the property, creating a footpath along the beachfront. This unfettered access played into architect Scott Lee’s vision for the design. “If you go to any hotel in the Cayman Islands, the arrival experience is at sea level,” he told me. “So where you walk in, you really can’t see anything. Our idea was to elevate reception from zero to 24 feet above sea level. You get this commanding view not only of our property but down to the whitewater and off to the horizon. We wanted a modern expression of the Caribbean.”

Lee and his associates rendered a series of spaces that flow seamlessly, blending sea and sunlight. The 8500-square-foot spa, for example, though located below the lobby level, is flooded with natural light. A breezeway from the reception area leads to Ave, the Seafire’s primary restaurant, which, under the direction of the resort’s executive chef, Massimo De Francesca, combines imported and locally sourced ingredients to create a menu that captures the island’s multicultural personality. The interior offers casual seating areas around the bar, while the seats at the counter of the open kitchen belong to Avecita, a restaurant within the restaurant specializing in tapas and pintxos. Beside the main building and the pool complex stand three beach-facing bungalows and the residential tower, which houses 62 condominiums ranging in price from $US1-8 million (about $A1.3-10.4 million). As twilight approached, our party gathered on the terrace, awaiting the phenomenon that gives the new resort its name. A seafire, I was told, is a brilliant flash of green that, under the right conditions, appears at the moment the sun hits the horizon on the Caribbean Sea off Seven Mile Beach. Thanks, however, to the cloudy fallout of Hurricane Matthew, on that evening we were denied the spectacle and settled instead for a radiant sunset.