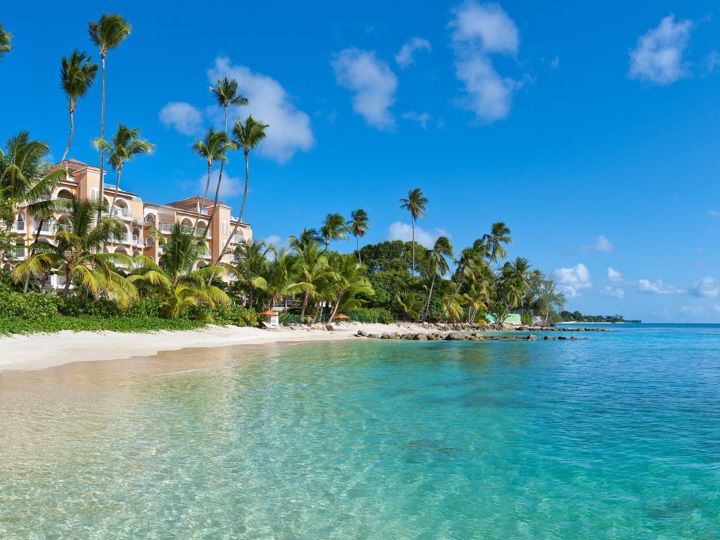 Ten resorts where you can train with the pros

Shoot hoops with an NBA coach, hit the green with a PGA champ, or swim with an Olympian.

Now it's possible to learn from the best at five-star resorts around the world that offer lessons with former Olympians, world champions, NFL stars, and more. From hitting the fairway with PGA Tour winner Bobby Clampett to doing the butterfly stroke with Olympic Gold Medalist Misty Hyman, these 10 new sport programs at luxury hotels promise to improve your game.

Volley with a Wimbledon winner Surrounded by leafy green trees and the turquoise Caribbean Sea, the red clay courts at Hotel du Cap-Eden-Roc in the French resort town of Antibes are the ideal place to perfect your backhand — especially with triple Grand Slam doubles champion Michaël Llodra at your side. Llodra is known for his net play as well as being a wine connoisseur — participants can partake in a post-game wine tasting session with Llodra and head sommelier Xavier Dinet.

Train with an NFL legend NFL superstar Randy Moss is heading to BodyHoliday in St. Lucia this July to lead the resort's WellFit Families retreat. Moss will be on property from July 16 through 22 to host private fitness training sessions, nutritional seminars, beach boot camps, two-hand touch football games, motivational talks, and more. Typically an adult's only resort, BodyHoliday opens its doors to children aged 12 and older during the WellFit Families retreat.

Hit the green with a PGA champ The two PGA-level golf courses at Tiburón Golf Club at Ritz-Carlton Resorts of Naples, Florida are some of the world's best, hosting two professional tournaments annually. Now guests can improve their stroke with one of the world's best players: PGA Tour winner Bobby Clampett. At the Impact Zone Golf Academy, guests can partake in private individual lessons or custom group sessions with Clampett, who will teach the Five Dynamics of Impact-Based® instruction through the use of cutting-edge technology and personalised guidance.

Glide on ice with an Olympian Skating along the sparkling ice in Russia's majestic capital is a quintessential Moscovian experience, so why not do it with one of the best ice skaters in the country? Guests at the Four Seasons Hotel Moscow can take private skating lessons with Alexander Zhulin, a World Figure Skating champion and two-time Olympic medallist in ice dancing who is also a legendary trainer to some of Russia's greatest talents.

On the rink of Moscow's Olympic Stadium, Zhulin can evaluate guest's skating skills and offer instruction in mastering the challenging techniques for which Russian skaters are known. Off the rink, students will enjoy a gourmet Champagne picnic.

Cycle the streets of Dubai The newly opened Jumeirah Al Naseem in Dubai has teamed up with the UK's professional cyclist David Millar to roll out the Ultimate Pro-Cycling Experience. In October 2017, cycling enthusiasts can experience an exclusive opportunity to ride with the former Great Britain captain through the streets of Dubai.

Play polo with a pro Hike the hills of Monaco with a Nordic champ At the historic Hotel Metropole Monte-Carlo in Monaco, Marc Raquil — the 2003 World Championship gold medallist of the 4×400 metre relay and a silver medallist in the 400-metre—offers personalised coaching along with guided outdoor jogging and Nordic walks. Nordic walks are an all-terrain variation of urban running helped by poles to tackle steeper gradients or rocky ground of the trails in the hill country behind Nice or the coastal paths along the Mediterranean.

Swim with an Olympic champion Swim laps with Olympic gold medallist Misty Hyman at the Sanctuary Camelback Mountain Resort in Paradise Valley, Arizona, where she teaches her sport to beginners of all ages, as well as helps experienced swimmers improve their stroke. Participants can choose from fitness, competitive, or triathlon-focused lessons.

Punch, kick, and shoot with the pros Known for its sports academies, Villa del Parco & Spa, in the idyllic seaside town of Forte Village, Italy, has several schools that are run by champions and professional coaches. From boxing with WBA Super Middleweight champion Frank Buglioni to learning rugby from players Will Greenwood and Austin Healey guests of all ages can take professional-level classes all summer long. Visitors can also train with UK soccer stars like Carlo Cudicini and Dennis Frank Wise and improve their basketball game with current San Antonio Spurs assistant coach Ettore Messina.

Hit the slopes with a ski World Cup winner Hit the slopes with Dani Mahrer (eight-time Ski World Cup winner) or Marc Girardelli (winner of five Ski World Cups and 13 medals at the Ski World Championships) at the Carlton Hotel St. Moritz, a Leading Hotel of the World. All-day lessons in the Swiss Alps with either champ are available only to hotel guests. Add on the perks of the hotel's outdoor butler and an unforgettable day is guaranteed.