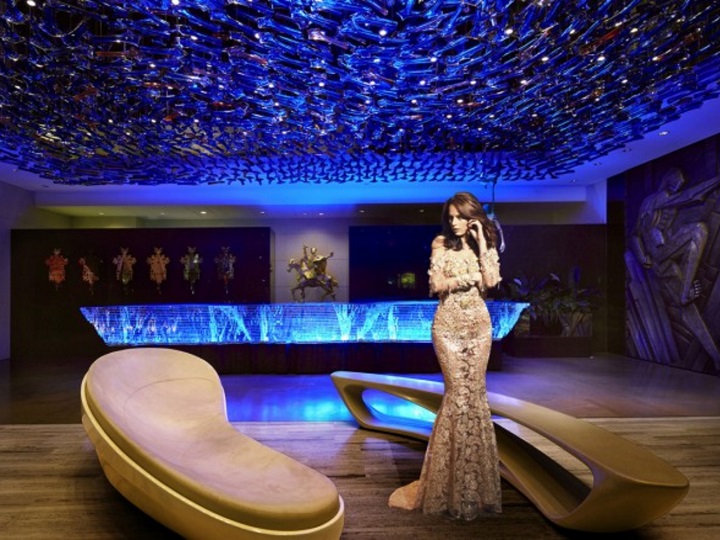 From Salvador Dalí in the lobby to Pablo Picasso in the bar, these are a true art enthusiast’s dream.

It's not every night that you get to sleep with Andy Warhol and Damien Hirst. But when you stay at New York City's Gramercy Park Hotel, you're guaranteed more than a few artful encounters.

Of course, the Julian Schnabel–designed property — adorned with original works by Jean-Michel Basquiat, Richard Prince, and Fernando Botero, in addition to Hirst and Warhol — is just one of our favourite hotels offering guests a museum-quality experience.

Whether it's Salvador Dalí in the lobby, Pablo Picasso in the bar, or Jasper Johns in the restaurant, these are the art-savvy stays that have us dreaming of a night at the museum. Set in the picturesque hills above Zurich, the Dolder Grand delights with a truly museum-quality collection of works ranging from pieces by living legends like Takashi Murakami and Anish Kapoor, to those by beloved greats like Andy Warhol and René Magritte.

Look closely and you may even find a surprise or two: For instance, a painting by Sylvester Stallone — undeniably in-your-face with its massive artist's signature scrawled across the canvas — regularly sparks debate of what truly makes art, art. Of course, the art experience is more than just paintings on the wall: The new Saltz restaurant is the work of German mad genius Rolf Sachs and, in the lobby, an all-too-lifelike sculpture by the hyperrealist Duane Hanson causes many a guest to do a wary double-take. Art aficionados anxious to take in all 150 works can pick up one of the hotel's iPads for a self-guided tour. (thedoldergrand.com) Las Vegas is known more for neon and flash than art and cloture, but the Wynn Las Vegas shines with more than the glitter of casino lights. Stocked with pieces from the collection of owner Steve Wynn, the resort showcases a veritable who's who of the art world, from a nearly century-old chandelier designed by Paris's beloved Gustave Eiffel to the larger-than-life steel tulips of Jeff Koons. One piece you won't find at the resort? Picasso's 1932 painting _Le Rêve_, which Wynn infamously — and accidentally — put his elbow through in 2006. (wynnlasvegas.com) It seems there's a masterpiece on every wall and in every corner at the Hotel Éclat Beijing. Sure, you'll find Western greats like Salvador Dalí and Andy Warhol, but the 100-room property really shines for its extensive collection of contemporary Chinese art. Glimpse works by the likes of Liu Ruowang, Shen Jingdong, and, one of the country's most famous, Gao Xiaowu throughout the property. For a thorough education in China's contemporary art scene, request a tour from your attentive butler. (eclathotels.com) Have breakfast in the restaurant's back room among the sombre paintings of John Meyer, or enjoy a cocktail in the lounge beneath sketches by the world-renowned William Kentridge.

Most impressive, however, is the art gallery, filled with powerful works from some of the most talented — and, at times, controversial — artists of South Africa's recent past and present, from the satirical pop-art paintings of Anton Kannemeyer to the piercing (literally) sculptures of Walter Oltmann. (ellerman.co.za) Of course, what the hotel has that, say, the Museum of Modern Art doesn't, is a funky décor envisioned by director and all-around art world _enfant terrible_, Julian Schnabel. The result is an eclectic blend of over-the-top styles, combining classic Renaissance Revival architecture, vibrant yet elegant interiors, and some of the most important contemporary works of art around. Added bonus: For a quiet interlude, guests can pick up a key to the exclusive Gramercy Park, the city's only private park. (gramercyparkhotel.com) A swanky hillside Swiss retreat, Alpina Gstaad is a perfect blend of contemporary art and traditional crafts. Guests enjoy a rich mix of intriguing and approachable art, from classic landscape photography by Michel Comte to large-scale sculptures by Alexander Calder. A total of 63 works by 36 artists — including American painter Dan Colen and Canadian collective General Idea — are scattered throughout, so whether you're sipping Negronis in the bar and tucking into a bowl of fondue in the _stübli_, you know you're in good company. (thealpinagstaad.ch) The famed Spanish painter and sculptor Joan Miró spent much of his life — including his final days — on the beautiful Balearic island of Mallorca. As of September, the double manor houses of the iconic Belmond La Residencia are paying homage to the great artist with an exhibition of 33 of his original works in its Café Miró. The new collection, which is the largest assemblage of the artist's works in any hotel, has inspired a bit of culinary art as well, with La Residencia's head chef Guillermo Méndez offering a Miró gourmet menu featuring fresh Mediterranean ingredients presented in a suitably artful manner.

The exhibition — which includes _Paysanne aux Oiseaux, 1981_, a lithograph made just two years before the artist's passing — will run through the end of the year. (belmond.com) Set on bustling Orchard Road, the St. Regis Singapore is a beacon of comfort and culture for art aficionados. Here, some of the biggest names in South Asian art sit alongside worldwide superstars such as Pablo Picasso, Fernando Botero, and Frank Gehry. Art is fast becoming a hot commodity in the scorching Emirati city of Abu Dhabi, with both the Louvre and the Guggenheim readying outposts. Until then, you can get your art fix at the Four Seasons Hotel Abu Dhabi at Al Maryah Island, where a full roster of Middle Eastern and international artworks — many of which were commissioned specifically for the property — is on display. The verdant views from the hotel provided plenty of inspiration for commissioned works, which include the abstract paintings of Satoshi Uchiumi and a magnificent crystallised panel by Shinji Ohmaki. For an immersive taste, book one of the hotel's in-house or city art tours. (palacehotel.co.jp)