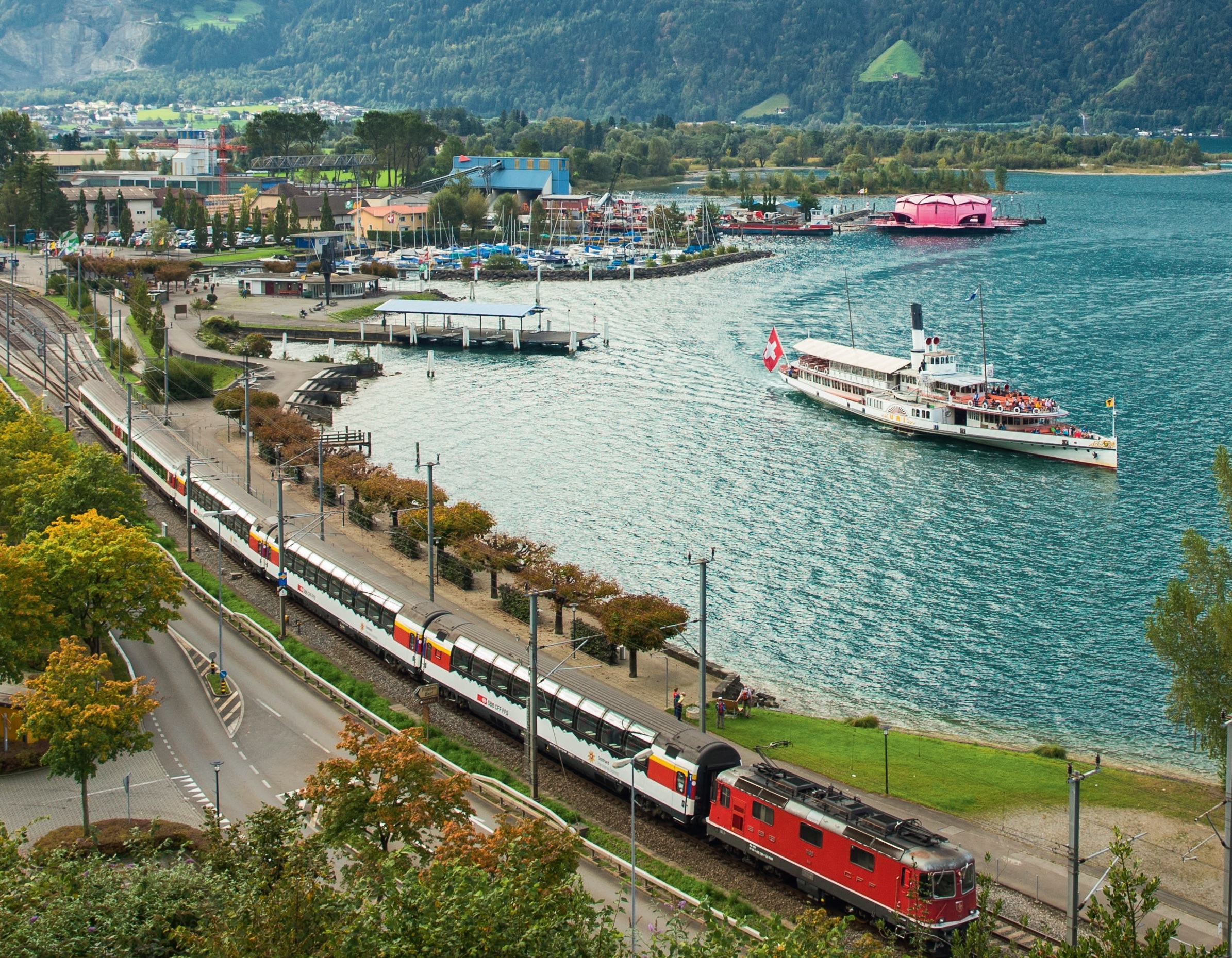 One of the world’s latest masterpieces of civil engineering also makes for a fascinating rail journey.

Cheese isn’t the only thing in Switzerland that’s full of holes. In Europe’s most mountainous country, so is the scenery. There’s an audio presentation cycling through four languages aboard the Gotthard Panorama Express as it rolls steadily towards peaks thrusting high into a clear sky. The English version tells us we’re heading for “the most perforated mountain in the world”.
Saint Gotthard isn’t the name of a specific summit. Instead, it applies to an entire range. The Saint Gotthard Massif separates Switzerland from Italy and it’s a big, beautiful and formidable barrier. Its high points top 3000 metres; not nearly enough to rank among the giants of the Alps, but still more than 750 metres taller than Australia’s Mount Kosciuszko.
It’s almost 150 years since the Swiss punched the first hole through Saint Gotthard. Drilling and dynamiting for a decade, they created a new rail route through the Alpine heart of Europe, a direct link between the Mediterranean and the North Sea.
Pack animals and, later, wagons had been carrying goods over the Gotthard Pass for around six centuries, but snow would block the route for half the year, from November to May. Obviously, a railway running through tunnels would have vastly more freight capacity and could operate year-round. 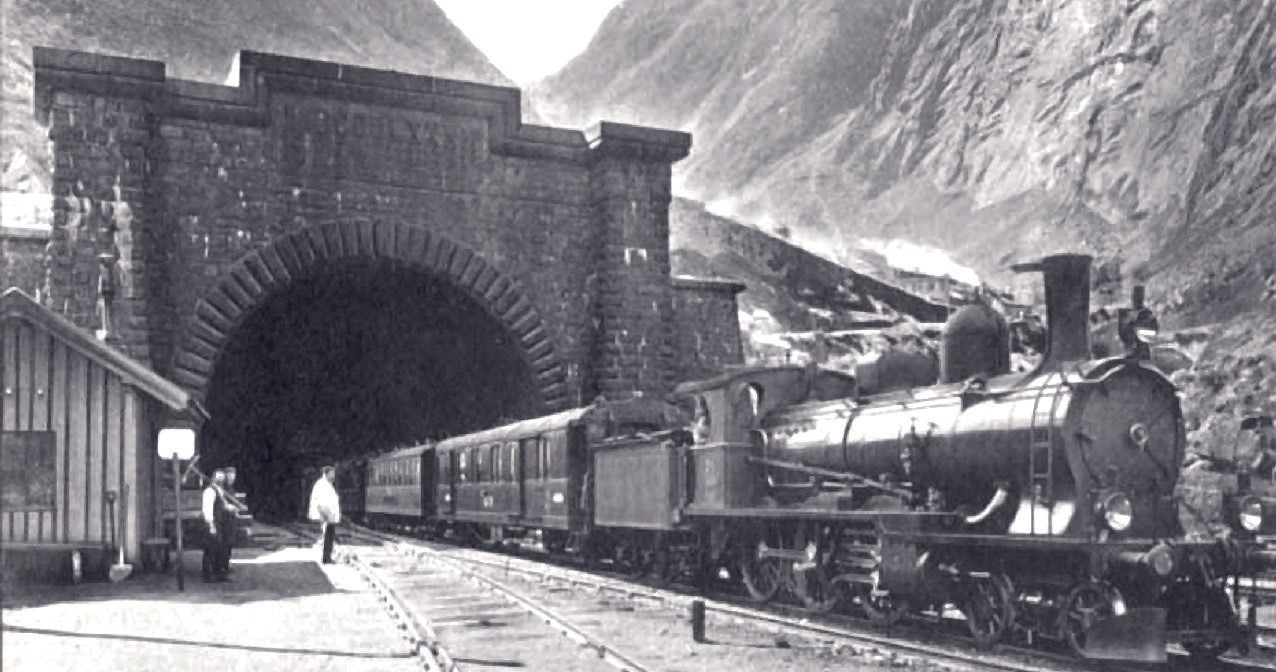 The feat of that first rail tunnel remains a source of pride for the Swiss to this day, according to historian Kilian Elsasser. He’s an expert on everything Gotthard, but especially the original tunnel. “It was the big achievement of Switzerland in the last 150 years, I would say. The railway line made it so important, this Gotthard Pass. Before, it was one of several passes through the Alps and without the line it would still be one of several passes through the Alps.”
From an engineering point of view, this was a madly ambitious project. It meant boring a 15-kilometre main tunnel, longer than any other in the world at the time. To create gradients gentle enough for hard-working locomotives to climb, the track would have to corkscrew through rock lining both the gorges that led to the main tunnel, 1100 metres up. It was one of the first engineering projects in the world to make large-scale use of dynamite, patented only a few years earlier. It’s estimated that 1000 tonnes of the powerful explosive, invented by Swedish chemist Alfred Nobel, was used.
Drama and tragedy punctuated the decade it took to construct the Gotthard Tunnel. The labourers, mainly Italians, protested over working conditions and pay in 1875. The Swiss Army, brought in to quell the unrest, fired on the strikers and killed four of them.
The workers had a point; at least 199 are known to have died in accidents in the tunnel. And the Gotthard Tunnel’s Genevan chief engineer, Louis Favre, died while inspecting work on it in 1879. Relentless pressure to keep to budget and timetable provoked his fatal heart attack, it was said.
The precision of Favre’s work only became apparent the year after his death. When the tunnels driving south from Göschenen on the Swiss side and north from Airolo on the Italian side finally met, their divergences in height and direction were trivial. The first train steamed through the Gotthard Tunnel in 1882.
It would be almost a century until another tunnel punctured the Saint Gotthard Massif. Opened in 1980, the new road tunnel had also taken a decade to dig. As it follows the same route as the rail tunnel, the road tunnel’s length is similar, at 17 kilometres. 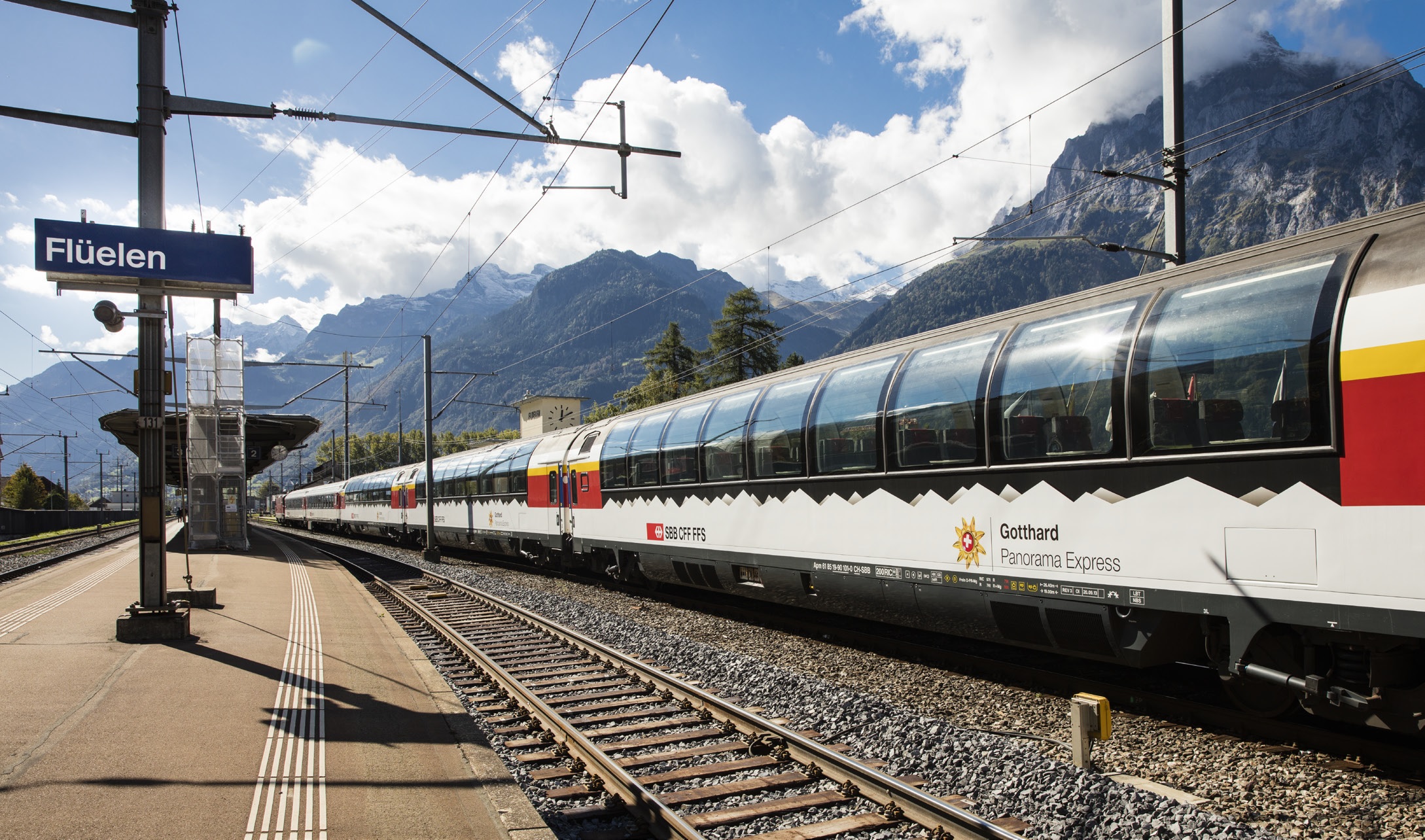 Stunning scenery awaits at the end of the tunnel on the new Panaorama Gotthard Express rail journey.

However, both the original rail tunnel and the younger road tunnel are eye-blink short compared to the latest route bored through this part of the Alps. The 57-kilometre Gotthard Base Tunnel, officially opened in June 2016 and fully operational by December that year, reclaims the Longest Tunnel in the World title for Switzerland. It’s also the world’s deepest traffic tunnel; its maximum depth of almost 2500 metres is similar to the deepest mines.
The Gotthard Base Tunnel is, in reality, a pair of tubes, each with a single pair of rails running through it. Boring the tunnels was done in less than a decade, although the whole project took 17 years to complete. The four TBMs (tunnel boring machines) used were monsters: German-made, they were each more than 400 metres long, weighed around 3000 tonnes and had 5000kW motors powering their cutting wheels. In a tunnelling tradition, they were given dainty, sunny nicknames by the tunnellers; the northbound machines were Sissi and Heidi, the southbound duo Gabi I and Gabi II. 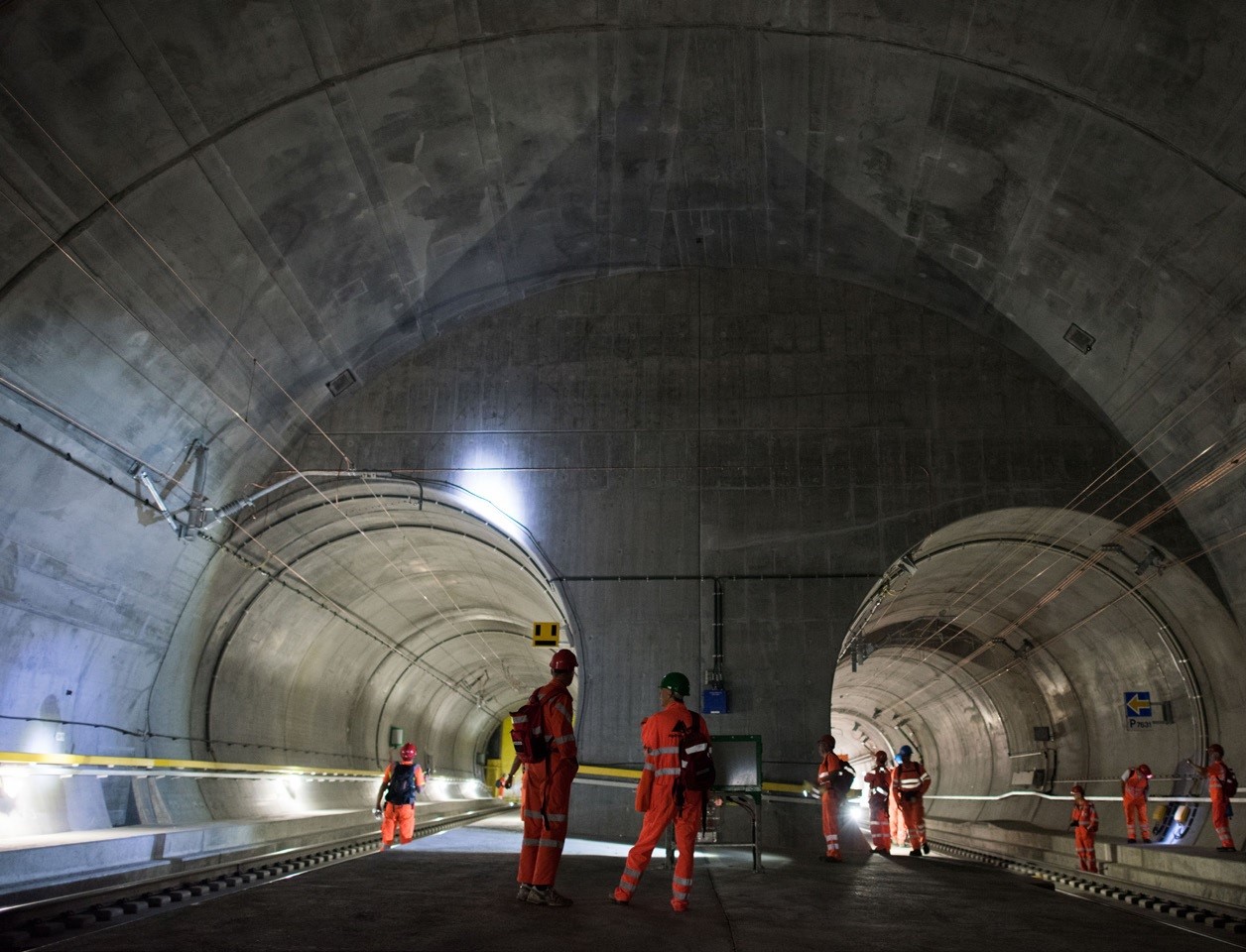 It took a multinational crew and four 3000-tonne tunnel-boring machines to bore the longest tunnel in the world.

The tunnels they bored between Erstfeld and Bodio are straighter, flatter and lower than Favre’s Gotthard Tunnel. Hundreds of freight trains, each carrying triple the maximum tonnage allowed on the old line, speed through daily at 100km/h. Passenger trains are fewer but faster. They’re permitted to do 200km/h through the Gotthard Base Tunnel.
According to the readout displayed on the screen above the aisle in my First Class carriage, mine is doing exactly 199km/h. The Trenitalia Frecciarossa (Red Arrow), bound for Basel from Milan, takes less than 18 minutes to pass beneath the Alps. Such speed lops a useful 40 minutes or so off the pre-Base Tunnel travel time between northern Italy and central Switzerland. From Milano Centrale to Zurich Hauptbahnhof, for example, now takes a little under three-and-a-half hours.
The tunnel is unlit, so the impression of speed is all sonic. The hiss and rustle of disturbed air can be heard through the double-glazed window and there’s a low-frequency rumble from the bogies below. The ride is completely smooth. 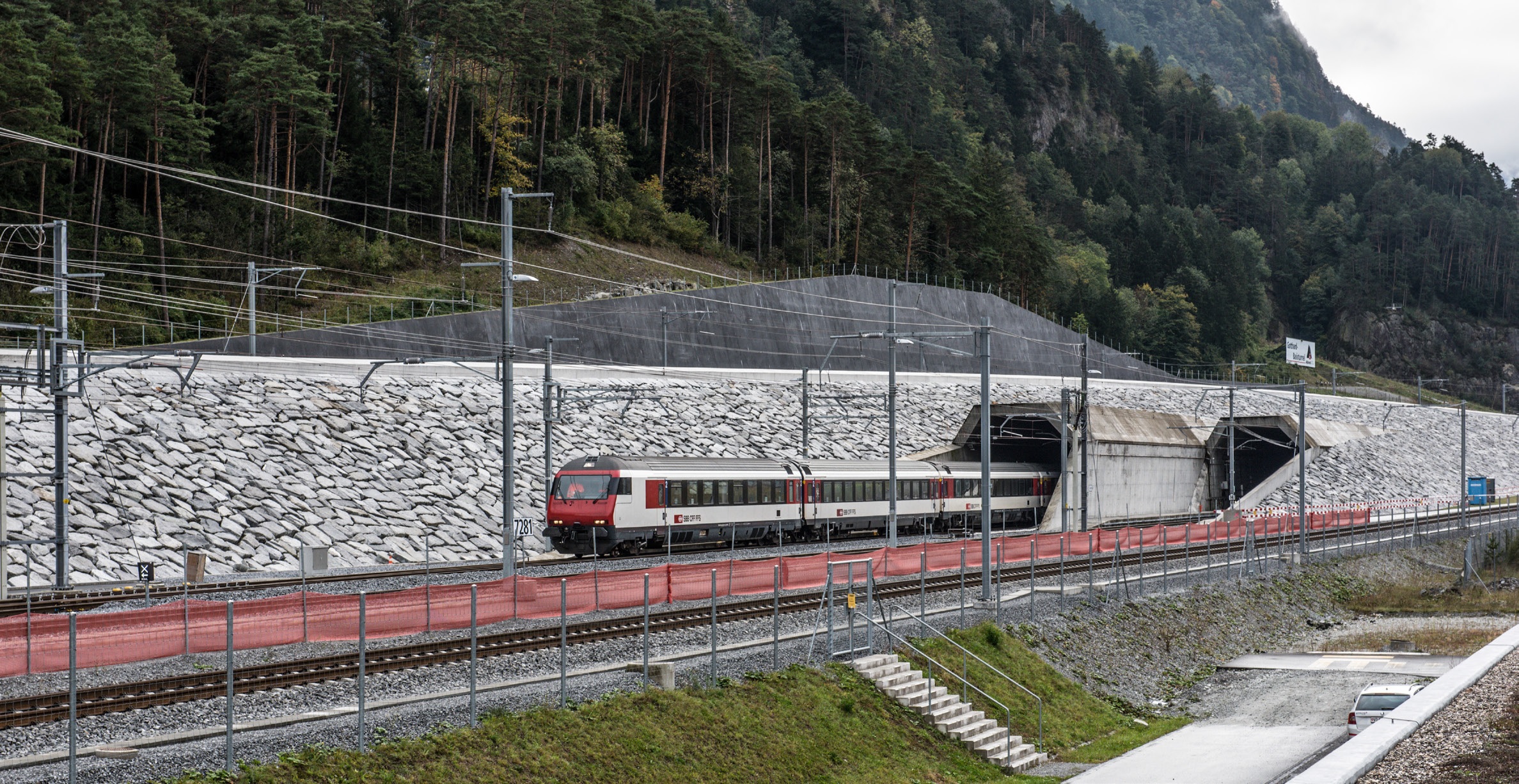 I leave the Frecciarossa at Lucerne. With all freight trains now using the Gotthard Base Tunnel, the old line is now a tourist attraction. Regular local services still run, but the queen of the line is the new Gotthard Panorama Express. It runs once daily from this lovely lakeside city all the way to Lugano on weekdays, but stopping short at Bellinzona on weekends. Another Gotthard Panorama Express runs once a day in the reverse direction.
Lucerne is home to the Swiss Transport Museum, which attracts more visitors than any other collection of stuff in the country. Sited on the lake shore, a Gotthard Base Tunnel boring machine cutting wheel stands adjacent to its entrance. This work-worn tool, around nine metres in diameter, could easily be mistaken for some piece of modern sculpture.
Inside the sprawling museum is an area dedicated to the Gotthard Base Tunnel. The highlight is a 1:1000 cutaway model, which makes clear the scale and complexity of the project.
Switzerland can justifiably claim to have pioneered modern tourism back in the time of Queen Victoria, herself a visitor to this part of the country. They’re still adept at it, especially if the journey involves rails. 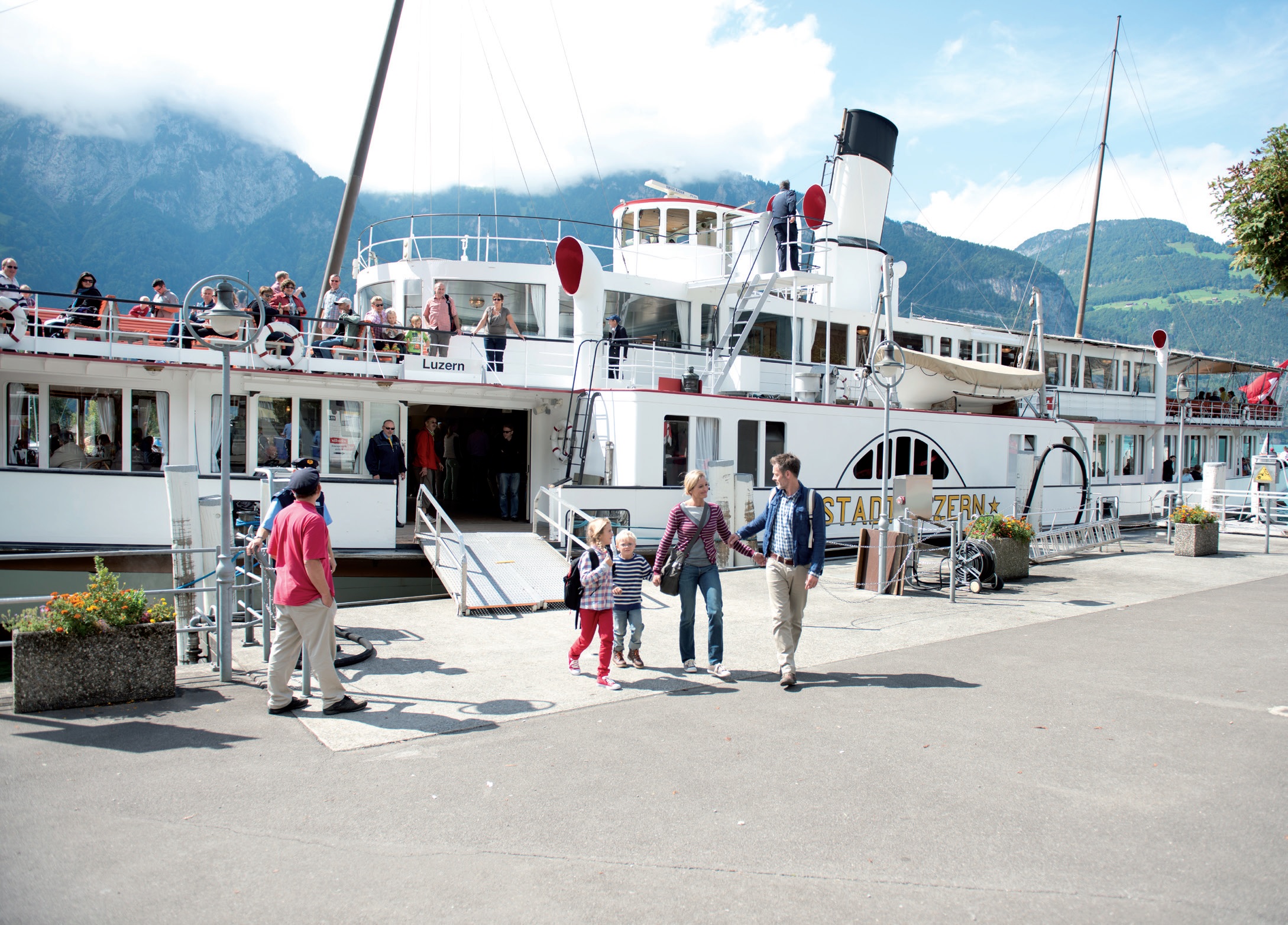 A steam boat operates between Lucerne and Flüelen, where you can board the Gotthard Panorama Express.

But the Gotthard Panorama Express experience begins, at least for those departing from Lucerne, no less romantically with a ferry. The Stadt Luzern, a stately paddle steamer built in the late ’20s, departs a dock in front of Lucerne’s railway station. The ferry’s been converted to run on oil, so there are no sweating stokers shovelling coal into its boiler furnace, but you can see its big, slow-turning three-cylinder engine at work in the centre of the vessel from the main deck.
Kilian Elsasser is aboard mainly to deliver a speech to the officials and guests riding this maiden run of the Gotthard Panorama Express. I speak with him after his speech, which had earned him a warm round of applause.
As the Stadt Luzern splashes along, Elsasser points out lakeside landmarks. There’s Rütli, the meadow where Switzerland was born in 1291 when three districts – Uri, Unterwalden and Schwyz – swore an oath of alliance against their Austrian Habsburg rulers. Here’s the rock where the maybe-mythical marksman William Tell leaped to freedom in 1307 from a storm-tossed boat. He was being held prisoner by a Habsburg-appointed overlord who’d famously forced him to shoot an apple from his son’s head to avoid punishment for a display of disrespect to the regime. Once free, so the legend goes, Tell used his crossbow again, this time kill his persecutor.
These are reasons the Swiss regard this area as the cradle of their nation. Elsasser believes the nearby Gotthard became connected with Switzerland’s sense of independence during World War II. Determined to preserve their neutrality, the Swiss threatened the destruction of Favre’s strategically important Gotthard Railway should Nazi boots step onto their soil.
“It was better than the Brenner,” Elsasser insists, referring to the other major rail route across the Alps, away to the east and running from Italy, via Austria, to Germany. The Swiss line was newer and better-designed, says the historian. “That’s typical Swiss. We don’t invent watches, but then we build the best. That’s also like our railways.”
The Stadt Luzern docks at Flüelen at the southern end of Lake Lucerne. It’s only a few steps to the Gotthard Panorama Express waiting at the adjacent station. The train pulls out punctually and heads south along the gradually narrowing valley of the Reuss River. After passing the northern portal of the Gotthard Base Tunnel at Erstfeld, the line spirals to gain height, providing passengers with three different views of the pretty little church of Wassen.
It doesn’t take long to traverse Favre’s 15-kilometre tunnel.
Soon we’re looking at the scenery of Ticino, Switzerland’s Italian-speaking canton, and feeling warmer. The train now spirals downwards, passing through gorges that were the most difficult part of the original path over the Gotthard. The train passes the south portal of the Gotthard Base Tunnel before pulling into the station at Bellinzona, famed for its trio of castles.
I ask Elsasser, who so loves the old Gotthard line that he bought a place in Göschenen at the northern end of Favre’s tunnel, what he thinks of the new Base Tunnel.
“As a Swiss citizen I’m very proud, because we really did a masterwork,” the historian replies. Elsasser says he voted ‘Yes’ in the referendums required in ultra-democratic Switzerland to approve the project, and rode on the first passenger train to travel through it in June 2016.
“But, on the other hand,” he continues, “it could be a tube in London or Paris. The big mountains and all this history, you don’t realise is there because it’s just a tunnel.” Elsasser leans close and lowers his voice. “In a way, it’s boring, you know …”