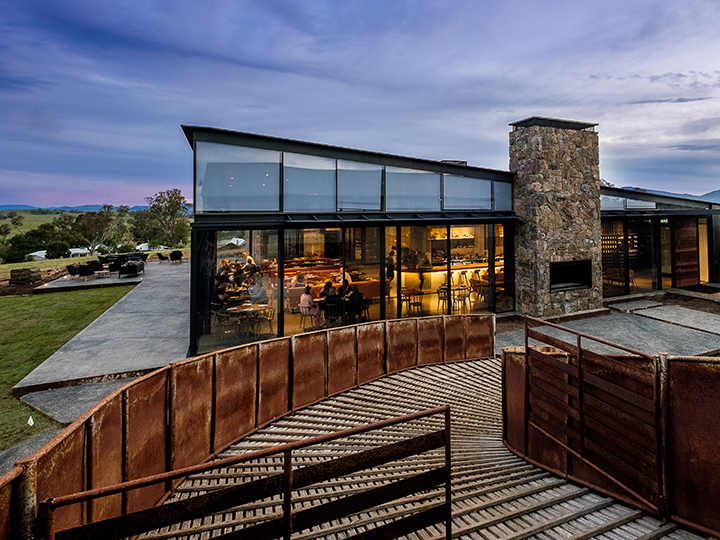 Banish the winter blues at one of these new country retreats in some of Australia’s cosiest locations.

A weekend in the country is not at all what it used to be. New boutique hotels are injecting glitz and pizzazz to farms, vineyards and country towns with their quirky art ethos, innovative design and sensational food and wine. Historic properties once the private domain of governors, tycoons, cattle kings and bankers are redefining country style, welcoming guests to their rarefied world for the first time.

So embrace the cold, snuggle up in front of a roaring fire, luxuriate with a long lie-in and relish the soul-soothing stillness of a frosty morning in one of these six new destinations that make going bush in winter more attractive than ever. Named after the world’s scariest bunny – the mythical jackalope, a cross between a jackrabbit and an antelope that, according to American folklore, can sing like a cowboy, mates only when lightning flashes and has a fondness for whisky – this stylish new hotel within a vineyard an hour’s drive south of Melbourne brings a welcome touch of glamour and a quirky sense of fun to the Mornington Peninsula.

There’s a seven-metre-tall sculpture by Emily Floyd of a jackalope at the hotel door, while inside it’s a dark and moody space, where art and design meld to create a lavish den worthy of a warrior rabbit. Rooms, decked out with hand-crafted Zuster furniture, are sleek and sexy with lots of black and gold. Suites – ‘lairs’ in the hotel’s parlance – have floor-to-ceiling windows, terraces with fireplaces and a black Japanese stone tub so deep you almost need a lifejacket. All rooms have vineyard views that transfix and there’s a 30-metre black infinity pool. Kick back with a cocktail in the hotel’s bar, Flaggerdoot (in case you’re wondering, it’s the collective noun for jackalopes). Rare Hare offers casual Italianesque cellar-door dining, and Doot Doot Doot (the leader of a Flaggerdoot), lit by a 10,000-globe chandelier, does a splendid degustation.

The Peninsula Hot Springs are a short drive away, there are 50 cellar doors on the surrounding slopes and three of the country’s top 10-rated golf courses are nearby. Just watch out for horned rabbits. Soak in the views from your daybed that floats above a precipice at Hepburn Springs Clifftop Retreat in Victoria’s spa country. Nominated for several architectural awards, these stunning Cor-Ten steel villas feature wrap-round views and a private spa – although the famous Hepburn Springs Bathhouse & Spa is just down the road.

Should you tire of the view or of watching the flames dance in your egg-shaped fireplace, each of the two-bedroom retreats has unique entertainment options, ranging from an arcade console with 1400 games and a Lord of the Rings pinball machine to a trademarked ‘World’s Best Massage Chair’ that really does work you over like a team of shiatsu masters. A fourth villa, fashioned from a shipping container with a glass floor cantilevered over the cliff edge and a metre-wide chromotherapy shower head, will be added later this year. There’s a well-equipped kitchen in each retreat, but the two-toqued Lake House, Kazuki’s and the perennially popular Farmers Arms Hotel are but a few minutes’ drive away. Or order in for a romantic fireside dinner. One of the country’s most prestigious farming properties, Goonoo Goonoo Station (pronounced ‘gunna ga-noo’), 20 kilometres south of Tamworth in NSW, has just emerged from a four-year, $5 million makeover. Established in 1831 by one of the colony’s most powerful families – Philip Gidley King was governor of NSW between 1800 and 1806 – the sheep station was practically a village with more than a dozen cottages, school, chapel, butcher’s, blacksmith’s shop and even a traveller’s inn.

It’s still a working farm, with 9000 head of cattle rather than sheep these days, but most of the historic buildings, many convict-built, have been painstakingly restored and transformed into elegant accommodation full of striking artwork, ceramics and hand-crafted furniture. Explore the beautiful gardens, have a hit of tennis and dine on local trout and New England lamb at the new Glasshouse Restaurant – a contemporary glass cube furnished with recycled spotted gum, leather banquettes, burnished brass and a wall of wine, with panoramic views across the vast property’s rolling hills.

Opt to stay in one of the cottages or take the Homestead with its private heated swimming pool, billiard room and formal dining room, a stately reminder of the station’s illustrious past. Perched above a bend of the Murray on the outskirts of Paringa, three hours from Adelaide, the award-winning The Frames never fails to impress first-time guests with its mix of water views, extravagant sense of space and lavishly appointed interiors.

Each of the three retreats has a private pool, hydrotherapy spa, infrared sauna and state-of-the-art indoor and outdoor kitchens, although there’s a chef on call to cook for you if you’d prefer. Inside are smart TVs in the lounge, bedroom and spa room – perfect for binge-watching your favourite series – a coffee machine, massage bed and a good supply of music. Most people never step outside their door, but if you want to explore, you can cruise the maze of local waterways in a wooden gondola, take a private tour of surrounding wineries or visit Glue Pot Reserve, one of the country’s best bird-watching locations. Everything old is new again in the NSW Southern Highlands with the recent opening of The Old Bank in Mittagong, 80 minutes’ drive south of Sydney. Dating from the early 1890s, the former CBC Bank, which closed in the ’70s and languished as a dilapidated pigeon coop for years, has been meticulously remade into a charming boutique hotel while retaining many of its original features. These include a wine cellar in the original bank vault, sealed by a one-tonne door cast in London in 1852, and a magnificent cedar staircase. There are five suites, a studio and cottage, a cosy library with log fire, a pretty courtyard perfect for afternoon tea and home-cooked cake, and hearty country-style breakfasts, with fruit grown in the owner’s orchard.

The Old Bank, 83 Main Street, Mittagong, NSW, from $345 a night on weekends. oldbankhotel.com.au The Sunshine Coast’s newest luxury getaway, Altitude on Montville, has million-door views that stretch all the way to the coast. Each of the 23 apartments has a private balcony with spa and fireplace, and is stocked with local sweet treats from Fudgyboombahs and Chocolate Country.

Celebrity chef Matt Golinski runs the restaurant and the menu features the best of the area’s produce, including organic poultry from Gympie and seafood from Mooloolaba – do not go home until you’ve tried the lemon myrtle prawns with sea succulents.