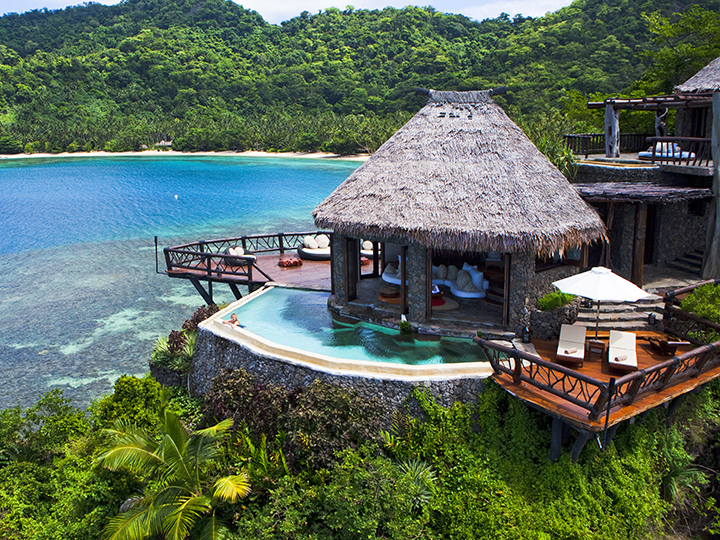 When you have only a limited amount of time, a private jet makes these hard-to-reach resorts feasible – each with landing facilities in close proximity.

When Homer wrote “the journey is the thing”, suggesting that the transit is more rewarding than the destination, Odysseus wasn’t on his way to an exclusive resort that is off the beaten path or on the other side of the world. And he didn’t have only a limited amount of time to enjoy the visit. When you’re in that situation, the journey is the thing you want to complete as quickly as possible. A private jet makes that feasible with these seven resorts, each of which has an airport or landing strip on-site or in close proximity. The grounds of Fiji’s Laucala Island resort (laucala.com) include a private airstrip for Air Laucala charter flights to and from Nadi International Airport, which is about 45 minutes away by plane. The airstrip can also accommodate a midsize jet, and guests can make arrangements to clear immigrations and customs on-site. The resort, which opened at the end of 2008, was built by the Austrian entrepreneur Dietrich Mateschitz, who co-founded the Red Bull brand. Not surprisingly, a seemingly unlimited supply of the energy drink is available to guests, as is coconut milk, which references the 1400-hectare island’s past as a coconut plantation. Accommodations include 25 one- and two-bedroom thatch-roofed villas and the three-bedroom Delana Hilltop Estate. The resort also features five restaurants, a 2000 square-metre swimming pool, a spa and a 6200-metre golf course designed by David McLay Kidd.

FLIGHT PLANS: The grooved-concrete landing strip on Laucala Island stretches 1150 metres, which is long enough for most midsize private jets to land and take off. Fees can be costly – as much as US$18,000 a visit. On-site customs, immigration, and biosecurity services are offered for an additional cost. Although Amangiri (aman.com) is located in the continental United States – in Canyon Point, Utah – it’s not easy to get to if you fly commercially. Arizona’s Page Municipal Airport is just 25 minutes by car from the resort, but it’s serviced by one provider – Great Lakes Airlines – which offers direct flights from only Denver and Phoenix.

Amangiri’s 34 suites are housed in modern buildings that are made from natural materials, allowing the resort to blend into the desert landscape and not distract from the spectacular vistas. The property may be best known for its spa, which offers a treatment menu that includes a variety of Navajo healing rituals. However, Amangiri’s location near some of the Southwest’s most dramatic national parks and protected areas also attracts adventure seekers. The resort offers early morning hot-air balloon tours of the nearby Navajo Mountain, the Vermilion Cliffs, and other geological formations. You can also explore the paleontological sites of the Grand Staircase-Escalante National Monument with an expert guide. Or you can kayak along the shoreline of Lake Powell.

FLIGHT PLANS: The 1800 metre-long runway at Page Municipal Airport can accommodate a Gulfstream G650. Lake Powell Jet Center (lakepowelljetcenter.com) is one of three FBOs (fixed-base operators) at the airport. If you golf, a visit to Bandon Dunes (bandondunesgolf.com), on the south-west coast of Oregon, should be on your bucket list. The resort features five distinct layouts, and their designers include such luminaries as David McLay Kidd, Tom Doak and Ben Crenshaw. The resort’s namesake course may be the closest US representation of a traditional Scottish links course.

Aircraft as large as a Boeing Business Jet 737 can land at and take off from Southwest Oregon Regional Airport in North Bend, Oregon, which is about 35 minutes by car from the resort. Two commercial airlines serve the airport, but they offer direct flights from only Denver and San Francisco.

In addition to golf, Bandon Dunes offers five lodging options and six restaurants. When not on the course, in a dining room or at a bar, you can explore the dunes on a nearly 10 kilometre-long network of hiking trails, kayak on the Pacific Ocean or nearby Coquille River, charter a deep-sea fishing boat, or indulge in a deep-tissue or sports massage at the resort’s massage centre.

FLIGHT PLANS: Southwest Oregon Regional Airport, which is a 35-minute drive from the resort, accommodates business jets of any size. Its runway is nearly 1800 metres long. Fees can be more than US$1000 a night, depending on the size of the aircraft. The airport’s only FBO is Coos Aviation (coosaviation.com). Hawaii draws more than eight million visitors a year; most go to Maui or Oahu. If you want to avoid the crowds, go to the less-developed and less-inhabited island of Lanai, which has its own airport. The Four Seasons Resort Lanai (fourseasons.com), the only operating resort on the island, reopened earlier this year following an extensive renovation that rejuvenated the guest rooms and suites by adding mahogany floors, teak-and-zebrawood walls and 75-inch televisions. The resort’s amenities include an adults-only pool that has a waterfall, cabanas and lava-rock grottos; a Jack Nicklaus-designed golf course that offers ocean views on every hole; and Nobu Lanai and several other new dining options.

FLIGHT PLANS: The Lanai Airport, which is state-owned and operated, is about 20 minutes by car from the resort. Its 1525-metre runway can accommodate most business jets. The airport includes a commercial terminal and two FBOs. In 2013, Don Carlos Pellas, president of Grupo Pellas, which owns the Flor de Caña rum brand, opened Mukul Resort (mukulresort.com) on the south-western coast of Nicaragua (known as the Emerald Coast). He wanted to create “a premier experience for guests so they feel at home as they discover the Nicaragua that I love”.

Pellas then made it easier for guests to reach the resort by building the Costa Esmeralda Airport, which opened in 2015 and is located only 10 minutes away.

The resort is part of Guacalito de la Isla, a $315 million private beach community. On-property activities include spa treatments, golf on the David McLay Kidd-designed course and surfing packages that offer 90-minute lessons and two days of board use.

You can leave the grounds for a day of sportfishing or a visit to the Pellas family’s private lake house in the city of Granada. Mukul also offers day trips to the nearby fishing village of Gigante – where you can get a taste of the local culture – and the Cerro Negro, where thrill-seekers can ash-board 215 metres down the side of the barren volcano.

If you like rum, you can take a helicopter ride to the Flor de Caña distillery for a private tour or stay at the resort and enjoy the daily rum tastings. The resort also has a walk-in humidor stocked with a vast selection of Central American cigars.

FLIGHT PLANS: The runway at Costa Esmeralda Airport is 1525 metres long, which is sufficient for jets as large as the Gulfstream V. The airport has an on-site customs department. qualia (qualia.com.au) is the Hamilton Island resort that, when it opened 10 years ago, redefined island luxury in Australia with its sun-soaked pavilions with infinity plunge pools overlooking the sea. It has recently reopened with a fresh new manicured look.

You might call it the winds of change. Cyclone Debbie, which battered the northern Queensland coast in April this year, thankfully caused no structural damage. However, the resort took the opportunity to bring forward planned refurbishments, spending almost $10 million on landscaping, soft furnishings and the acquisition of a stylish new Palm Beach 55 motor yacht available exclusively for qualia guests keen on exploring the beautiful Whitsundays. Besides having the Great Barrier Reef and the world’s whitest beach on your doorstep, other reasons to visit include a range of dining experiences, priority access to the only Australian 18-hole championship course on its own island, an award-winning spa and a host of private tours. What hasn’t changed is qualia’s appeal, still as timeless as the perfectly framed views across the Whitsunday Passage from your private pool. – LEE ATKINSON

FLIGHT PLANS: Hamilton Island Airport is large enough to handle daily commercial flights from Sydney, Melbourne and other Australian cities. Its runway can accommodate a Boeing 737 or an Airbus A320, so it’s long enough for any business jet. qualia provides chauffeured rides from the airport to the resort, which is less than three kilometres away. The Shangri-La Villingili Resort and Spa in the Maldives (shangri-la.com) has its own private arrival and departure lounge at the Gan International Airport, which can accommodate the largest business jets. From the lounge, which is called the Executive Terminal, a Shangri-La speedboat will ferry you from the airport to the resort in five minutes.

At the resort, you can take a guided tour through a jungle of ancient banyan trees and learn about the native flora and fauna along the way. The resort also has a marked snorkelling channel that leads snorkellers out to the reef. Experienced scuba divers can tour a torpedoed British oil tanker and other sites not far from the property. You can also try to swim with sea turtles.

The accommodations include 60 over-water villas and eight villas that are built into trees. Each of the latter offers nearly 230 square metres of living space.

FLIGHT PLANS: At nearly 2650 metres, the runway at Gan International Airport is long enough for any business jet. A new 3500-metre runway was scheduled to open in October. The resort’s Executive Terminal at the airport offers on-site customs services and baggage screening.