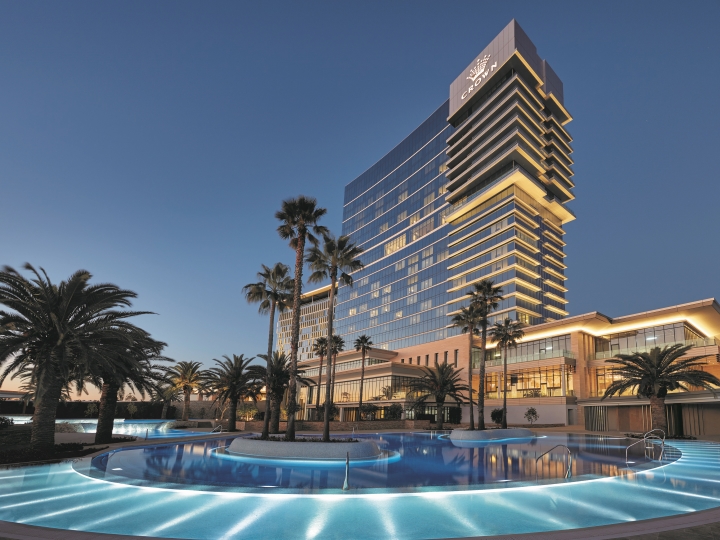 Go west to experience six stars on the Swan River.

Delivering a new level of lavishness in a city that has, until now, been a little light-on for luxe lodging, Perth’s first six-star hotel, The Crown Towers, has just opened on the banks of the Swan River.

Embracing the bigger-is-better ethos, everything about this resort-style hotel, from the spectacular glass sculptures – each consisting of 150 LED lamps – suspended seven metres above the lobby to the sparkling views of the Swan River and city skyline from each of the 500 oversized rooms, evokes an appropriate sense of grandeur. Bathed in the famous West Australian light, studios feature two walls of floor-to-ceiling windows, full connectivity and integrated entertainment system, and opulent bathrooms with a big soaking tub and inbuilt TV. The palatial villas have 24-hour butler service, but even they are eclipsed by the 750-square-metre Chairman’s Villa on the 25th floor, complete with full glass ceiling and wrap-around balcony. Relax with a poolside cocktail in a private cabana, get steamed up in a platinum- and gold-tiled spa inspired by ancient Roman bath houses, or cruise the Swan River or along the coast aboard Crown Perth’s Infinity superyacht. An impressive line-up of eating options features some of the biggest names in Australian fine dining including Silks, Nobu, Bistro Guillaume and Neil Perry’s Rockpool, as well as the opulent La Vie Champagne Lounge in neighbouring Crown Metropole, offering the city’s best selection of French fizz.