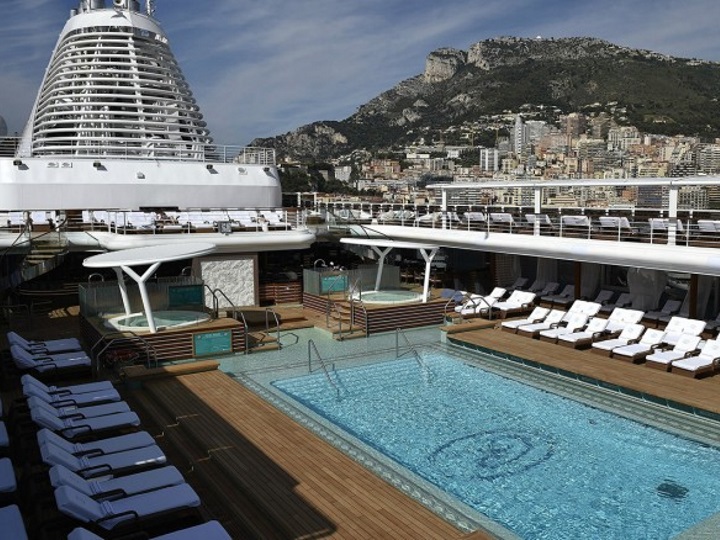 From submarine expeditions on Crystal Esprit to polar adventures on Seabourn Quest, these over-the-top adventures are the next generation of shore excursions.

There was once a time when cruise-ship shore excursions comprised little more than the typical tourist-site tours and lackluster nature walks. But a number of luxurious cruise lines have lately transformed their offerings — not only with spectacular ships sporting all the bells and whistles, but also with over-the-top adventures that are far from the norm.

From submarine expeditions on _Crystal Esprit_ to polar adventures on _Seabourn Quest_, these high-flying, far-flung, and utterly over-the-top adventures are the next generation of shore excursions. Crystal Cruises has definitely taken excursions to another level. Each of the 62 guests on its _Crystal Esprit_ — the brand's exclusive and all-inclusive yacht — has access to a high-tech, state of-the-art, deep-sea submersible that can descend as deep as 305-metres below sea level for unbelievable sealife and marine habitat explorations.

The deep-sea adventures in Crystal's Submersible Excursion last from 20 to 30 minutes, and are available on select days during _Esprit_'s Adriatic and West Indies itineraries. (crystalcruises.com) In Italy, Silversea's Sorrento Exclusively Yours Tour kicks off with a breathtaking flightseeing tour along the Amalfi Coast, with fly-bys over Pompeii and Herculaneum.A guided tour of Capri follows, with a private look into the island's many caverns.

After a leisurely three-course lunch at the five-star Grand Hotel Quisisana, you'll be swept back to Sorrento Capri-style, in a speedy jet foil. (silversea.com) These one-of-a-kind epicurean adventures are the perfect complement to the unrivalled cuisine experienced onboard, with the chef instructor from the ship's Culinary Arts Kitchen, along with a local guide, leading passengers through food-focused outings like wine tasting at the famed La Croix winery in Saint-Tropez. (rssc.com) With the recent voyage of its _MV Viking Star_ from New York to the Caribbean, Viking has made a distinctly luxurious departure from its river roots. On the West Indies Explorer — one of the ocean-going offshoot's newest Caribbean itineraries — guests will be given the chance to co-pilot a multi-million-dollar sailing yacht during the simulated Americas Cup 12-meter Regatta Race.

After guiding your crew through a racecourse at breakneck speeds, all of the competitors will celebrate in style with a dockside rum-punch party. (vikingcruises.com) For a deep dive into Southern France's food and wine scene, hop aboard one of Oceania's most luxurious ships — the _Marina or the _Riviera_ — for the line's Culinary Creations Tour of Provence.

Sailing to and from Monte-Carlo, the itineraries include a three-night stay at the five-star Château de Berne, as well as activities that may include a tour of the chef's vegetable garden and private wine cellar, hands-on cooking classes, VIP wine tastings, and jaunts to nearby villages. (oceaniacruises.com) Guests aboard the ship's eight-day Paris and Normandy itinerary will have the chance to hit the links at Golf de Rouen Mont-Saint-Aignan in Rouen and the cliffside course of Golf d'Étretat — the latter of which overlooks the region's glistening coastline. ( uniworld.com) Before boarding Seabourn's 11-night Polar Quest & Patagonia Cruise, guests can opt for a pre-cruise excursion to Union Glacier Base Camp and the South Pole. The icy adventure begins with a half-day at Glacier Point, where guests can ride a polar vehicle, ice hike, and cross-country ski.

They will then be whisked to the South Pole via private jet, where they can linger at 3353 metres above sea level — and subzero temperatures — on the southernmost end of the earth. (seabourn.com) The Strand's four-night Myanmar cruise from Bagan to Mandalay offers an exclusive overnight in the ancient city of Inwa. The ship is the only vessel allowed to moor overnight at the destination, allowing guest exclusive and unrivalled access to the Temple of Aungmye Bonzan — long after the crowds have departed.

The return to the ship is a treat unto itself, offering stunning views of sunset over Sagaing on the opposite shore. (thestrandcruise.com) Although there are many cruise lines that do the Galápagos, few do it quite like Quasar Expeditions. Their Incubators, Sharks, and Craters Excursion (available upon request) starts at the Charles Darwin Research Station where guests are accompanied by Godfrey Merlen, one of the leading biologists in Galápagos.

A half-hour private flight from Baltra Island to Isabela Island provides guests with sweeping views of the volcanic landscapes of the surrounding islands. Once on Isabela Island, guests are served a private picnic lunch overlooking the Sierra Negra caldera, the second-largest volcanic caldera in the world. The day ends with snorkelling among whitetip and blacktip sharks. (quasarex.com)