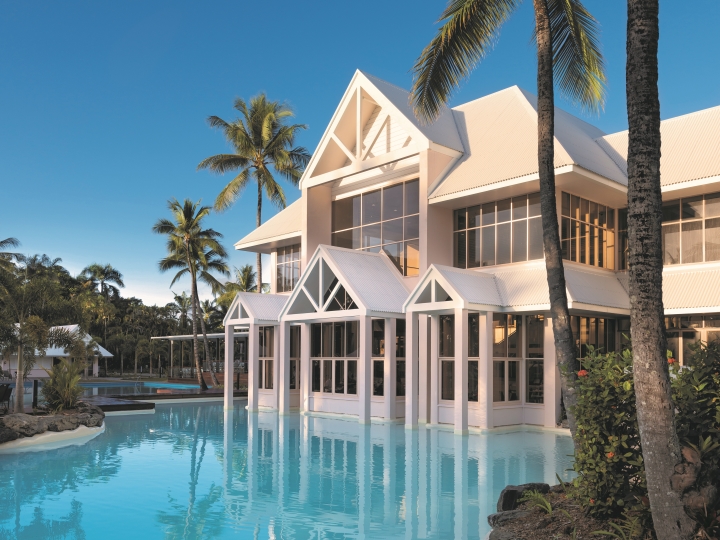 Makeover for a Port Douglas flagship

The beachfront resort that defined luxury in the 1980s and put tropical north Queensland on the world’s bucket list, transforming a fishing village into the favourite playground of celebrities, princes and presidents, has yet again set the benchmark for style with the unveiling of a $40 million makeover.

Built in 1987, the Sheraton Mirage Port Douglas was one of the first true five-star resorts to open in Australia. With both the Great Barrier Reef and the Daintree Rainforest on its doorstep, the luxurious lodgings attracted A-list holidaymakers from around the world, including George Clooney, John Travolta, Clint Eastwood, Rod Stewart, Mick Jagger and Jerry Hall. Bill and Hillary Clinton stayed twice.

Gone are the gold taps, the gilt-edged antiques and over-the-top opulence that epitomised ’80s glamour when it was developed by disgraced tycoon Christopher Skase and decorated by his wife, Pixie. In their place are crisp, elegant interiors reflecting the best of contemporary coastal style, featuring rainforest timbers and natural tones and textures inspired by the tropical surrounds. Brand new are more than 50 Lagoon Edge rooms and suites that offer direct access to the saltwater swimming pools from their own private balcony. This is the first Sheraton hotel in Asia Pacific to feature SPG Keyless, enabling Starwood Preferred Guest members to use their smartphone as a room key.

Also new is an alfresco dining area, 26 full-service pool-side cabanas for VIPs and an upgrade to the 18-hole golf course. It’s set to become one of the better resort courses in the region. Some things haven’t changed. It’s still the only five-star resort on the beach in Port Douglas. And while it may no longer be the sleepy fishing village it was 30 years ago, Port Douglas hasn’t lost its relaxed and laconic tropical charm – although there’s much greater choice when it comes to dining out these days. Getting there is half the reason for going there: the closest airport, Cairns, is an hour away, but like the resort itself, the road trip is beyond compare. The Captain Cook Highway is a sinuous ribbon of road that winds its way along the coast between the rainforest-smothered mountains and a chain of glorious beaches, a sensational view unfurling at every curve.