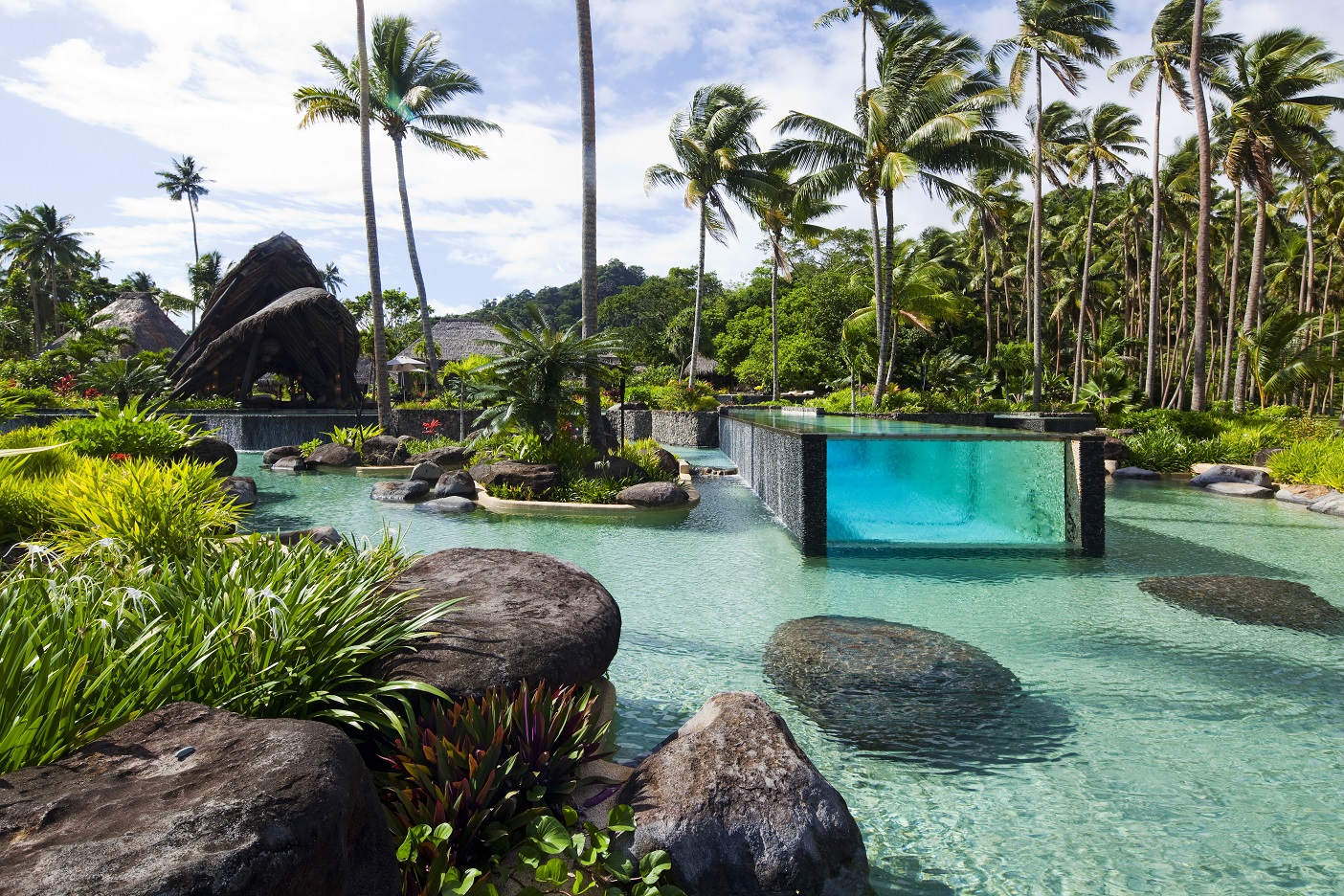 Among those who’ve not visited Laucala Island, it is probably best known for two things. One, that its accommodations are among the most expensive in the South Pacific, ranging per night from US$4800 for a single-bedroom villa to US$45,000 for the three-bedroom Hilltop Estate – or indeed, an island buyout (24 villas, excluding Hilltop) at US$170,000 per night.

The second thing? The fact that Laucala Island’s private owner is Mr Dietrich Mateschitz, co-founder of the Red Bull energy drinks business and said to be among the 40 wealthiest people in the world.

No matter how grand an expectation those two tidbits might create, Laucala Island will exceed them. Not with unimagined opulence or overbearing service, but with a simple and disarming sincerity and an outwardly effortless attention to detail. 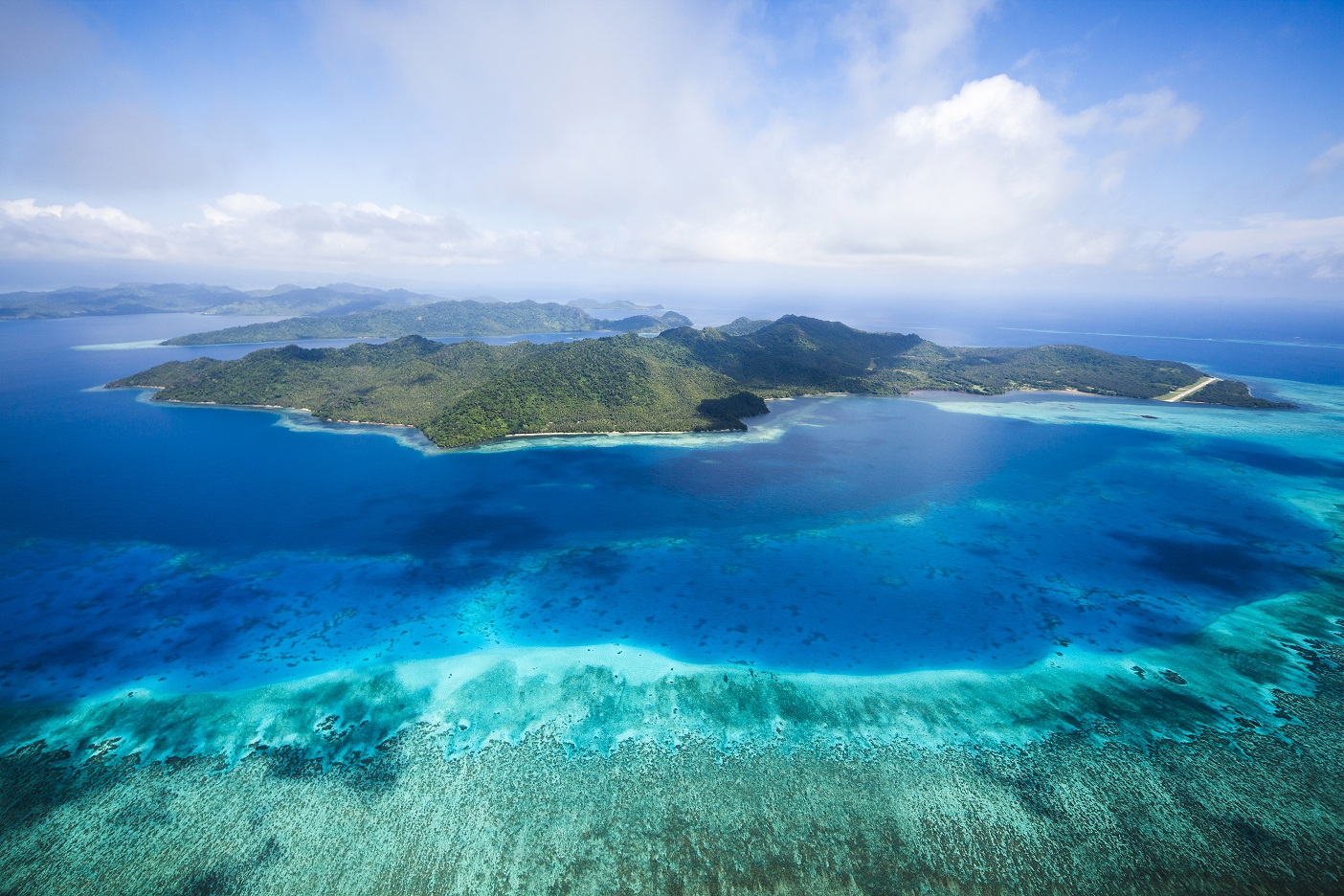 The statistics go a long way towards explaining how Laucala, situated among the Vanua Levu island group in Fiji’s north-east, achieves its get-under-your-skin specialness. The 1350-hectare island, of which more than two-thirds remains untouched, hosts a maximum of 80 guests. Around 400 staff tend not only to the 25 super-luxury villas, four restaurants, five bars and the whims of those guests at any hour, but also to a 100-hectare farm and garden that provides almost all the island’s livestock, vegetables, fruits and herbs, and contributes to Laucala’s being 80 per cent self-sustaining.

The island’s activities are, simply, the best of the best. The 18-hole championship golf course is designed by David McLay Kidd. The water activities include a full complement of jet-skis, water-ski boats, cruising and fishing vessels, but also extend to a classic teak yacht, Rere Ahi, and a $2.4m Deep Flight two-seat submarine. And the activities’ being “all-inclusive” means exactly that. 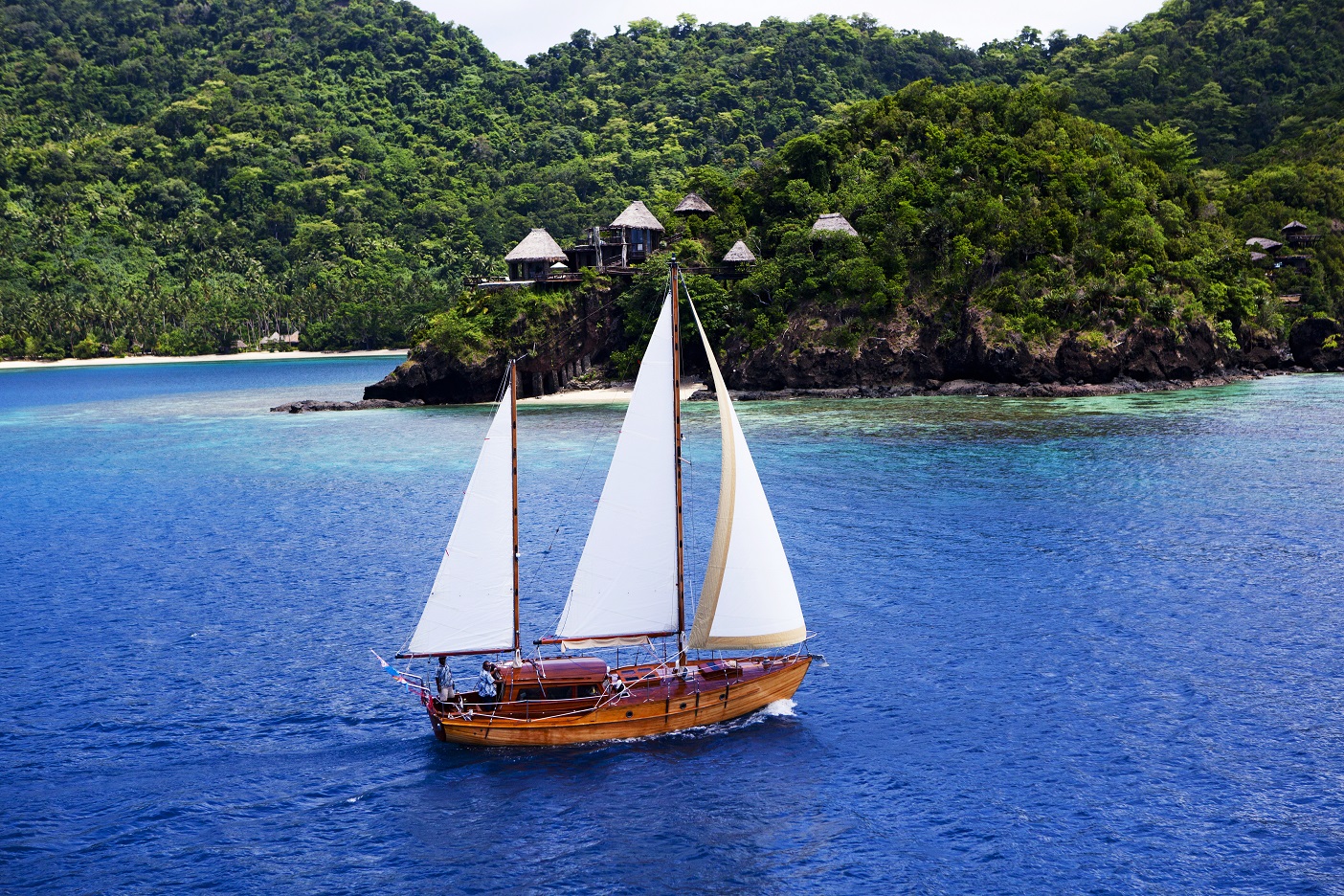 It’s our suspicion that behind Laucala Island’s strivings for ultimate privacy and perfection lies the greatest luxury of all: the absence of need to be profitable. Indeed, it’s possible that the island was only opened to tourism at all to better enable it to retain its world-calibre staff (such as executive chef, Jean Luc Amann) – a task more difficult if there’s only a smattering of visits from the owner’s family, friends and Red Bull athletes each year.

Mateschitz purchased Laucala in 2003 from the estate of the US publishing baron Malcolm Forbes, who had owned it, with its small copra plantation, since 1972. Forbes renovated the main Plantation House mansion, later added a sprinkling of thatched huts for guests, and built a house and small estate on the nearby hilltop.

So fond of Laucala was Forbes that, after his death in 1990, his ashes were buried beneath a small concrete monument on the Hilltop Estate. The inscription reads: “While Alive, He Lived.” 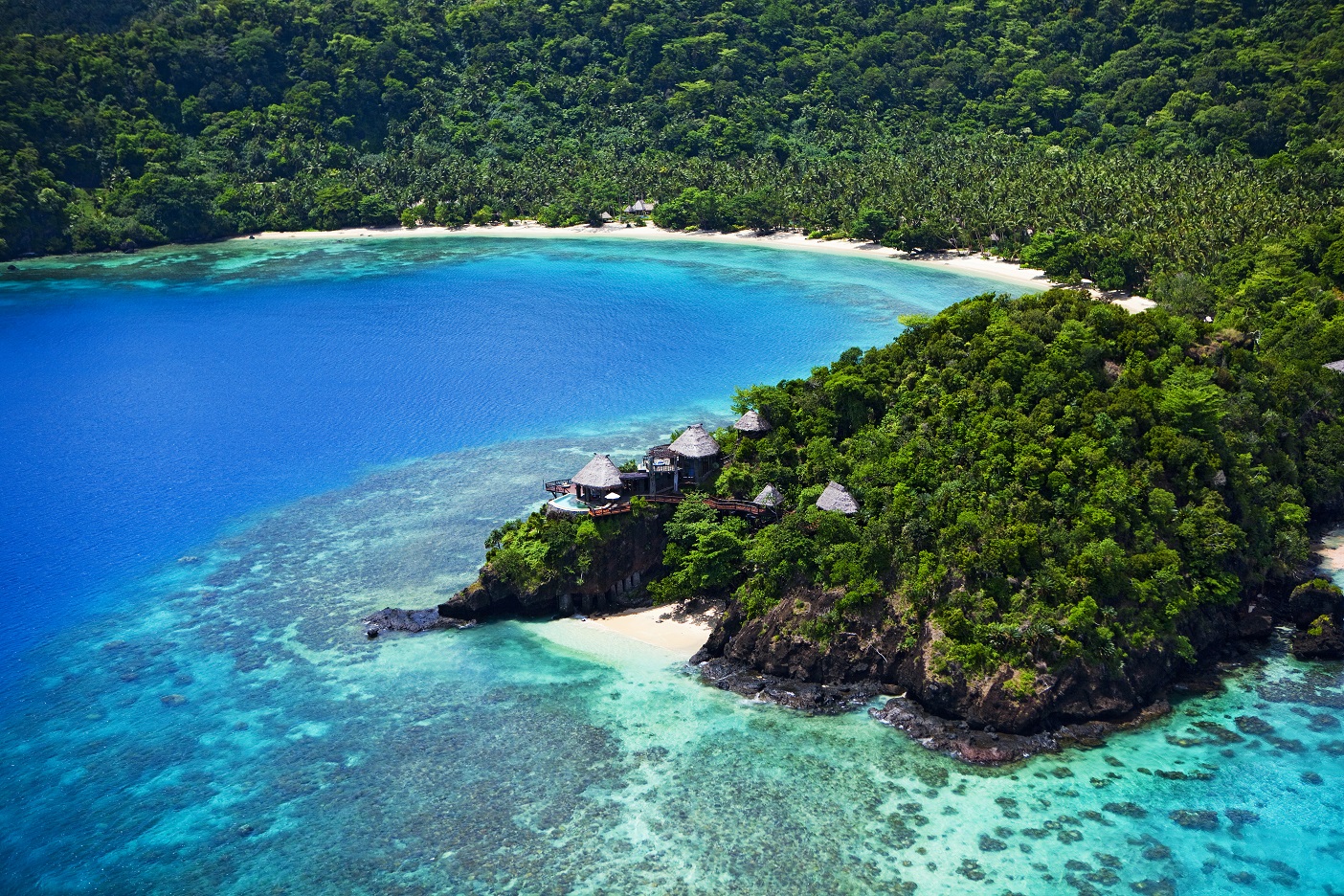 Mateschitz evidently waited until 2005 to commence building an authentic and (eerily, at all hours) postcard-perfect resort, focused on the lovely Plantation House – now the main fine-dining restaurant – and with its villas, bars and dining areas strung along 4.5 kilometres of the heavily-wooded island’s northern coastline.

The Laucala experience begins on Fiji’s main island of Nadi, where arriving international guests are greeted at the aeroplane door and fast-tracked through passport control on a short walk to the private Laucala lounge. This anticipatory oasis, luxuriously yet authentically decorated in local hardwoods, offers the first true feel of Laucala. Literally, too, as its washrooms are stocked with the soaps, lotions and shampoos that are made on the island, from its own produce. 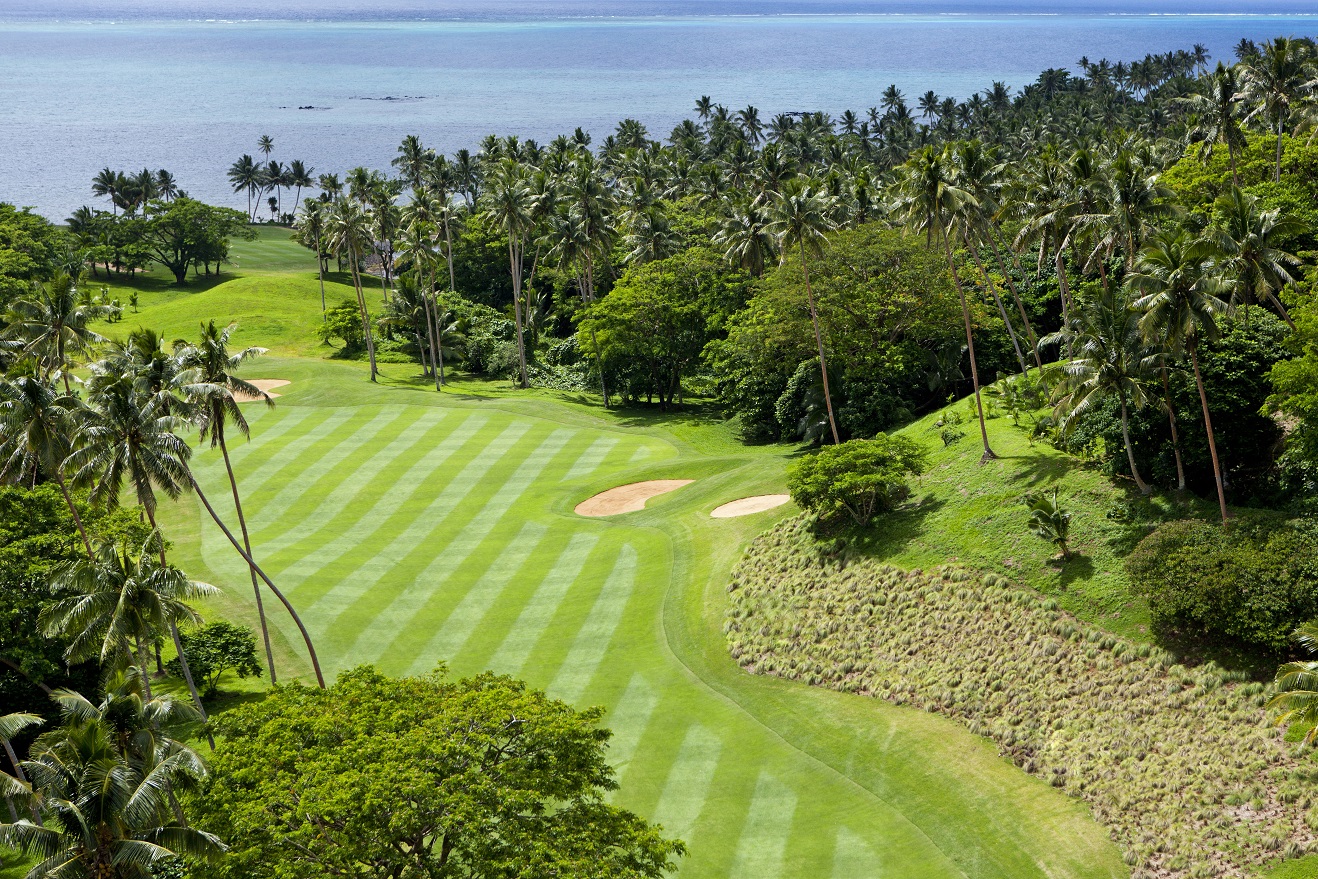 From Nadi it’s a 45-minute flight to Laucala on one of the resort’s two Beechcraft King Air twin-engined six-seaters. The island’s 1143-metre airstrip also handles private jets (with a landing fee of US$10,000, and departure fee of US$8000 if Customs formalities are required). That’s handy for the likes of the owner, who’s also a renowned aviation enthusiast and is said to fly in from Europe in his Falcon, after a final hop from Cairns.

A Land Rover Discovery travels the final few minutes to Laucala’s main village. As one emerges from the woods, the view unfurls with the glorious Plantation House mansion and its aspect over mown lawns dotted with coconut trees and a cluster of thatched-roof buildings (client services, gift store, the Pool Bar with its signature infinity pool), to the crisp white sand and blue ocean beyond. 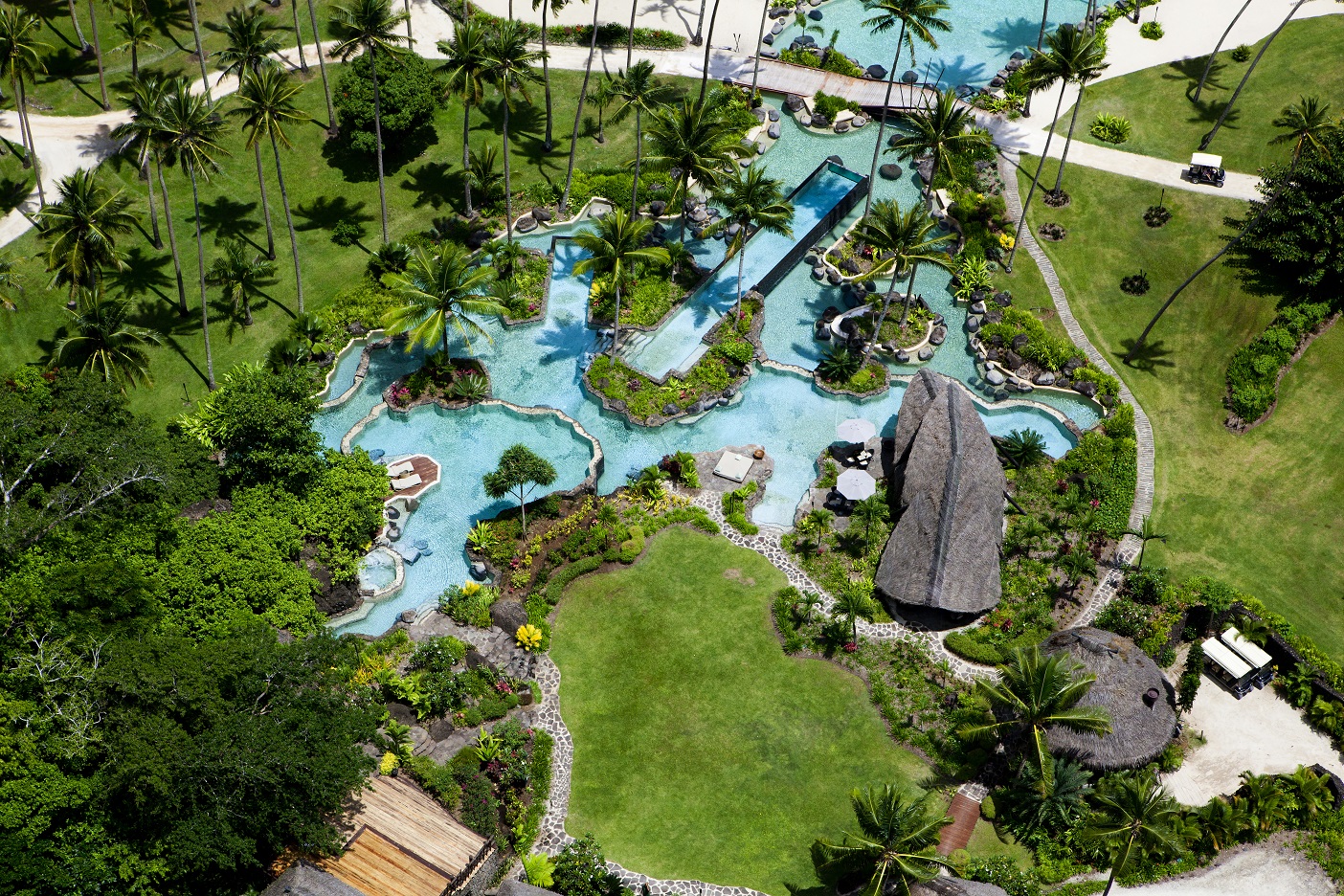 The Villas themselves are large and luxurious, with impeccably maintained gardens and sprawling swimming pool, yet they are outwardly inconspicuous and quite private, each being camouflaged in its own enclosure of mature bushland. The 14 single-bedroom, eight two-bedroom and three three-bedroom villas are divided variously among the Plantation beachfront and the overlooking Plateau, a golf cart’s journey west to more waterfront villas at Seagrass Bay and finally to the Peninsula, on the island’s north-west tip. 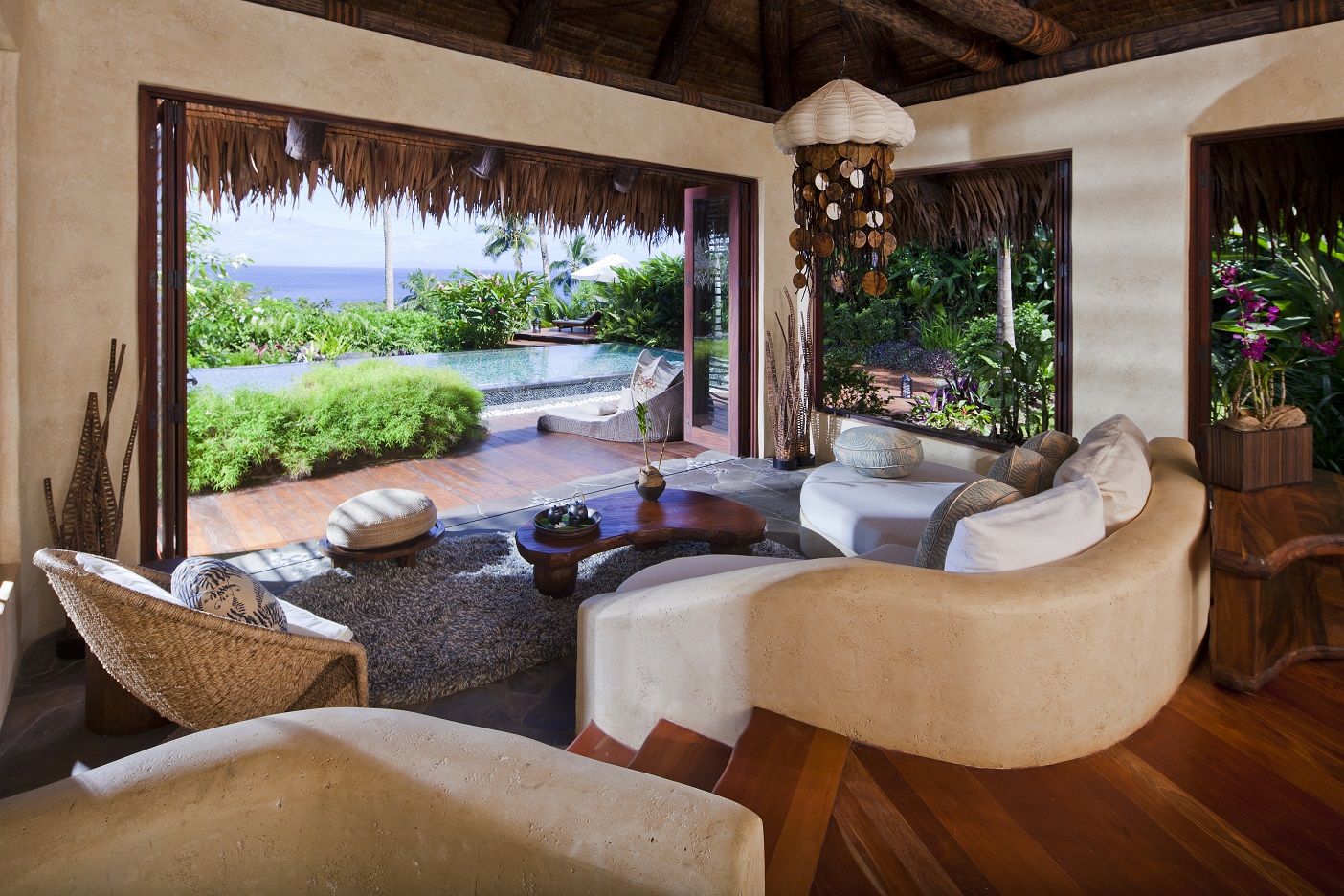 Bedroom in one of the Plateau villas

Among them are three specialty villas: the two-bedroom Overwater; the clifftop-clinging one-bedroom Peninsula; and the “resort-within-a-resort” Hilltop Estate. This latter compound of three luxury villas and pools, intended for three couples, is the owner’s preferred residence during his one or two stays each year.

Our Plantation single-bedroom villa awaited with a dedicated golf cart outside the private gateway, along with a pair of painted coconuts – red and green, replacing door swing-tags – atop a traditional hollow wooden drum, used by staff as a doorbell. The “single-bedroom” accommodation actually comprised three adjoining thatch-roofed huts (lounge, bedroom and bathroom), while in the large waterfront gardens outside, additional open pavilions provided for dining, poolside relaxation and an outdoor bath. 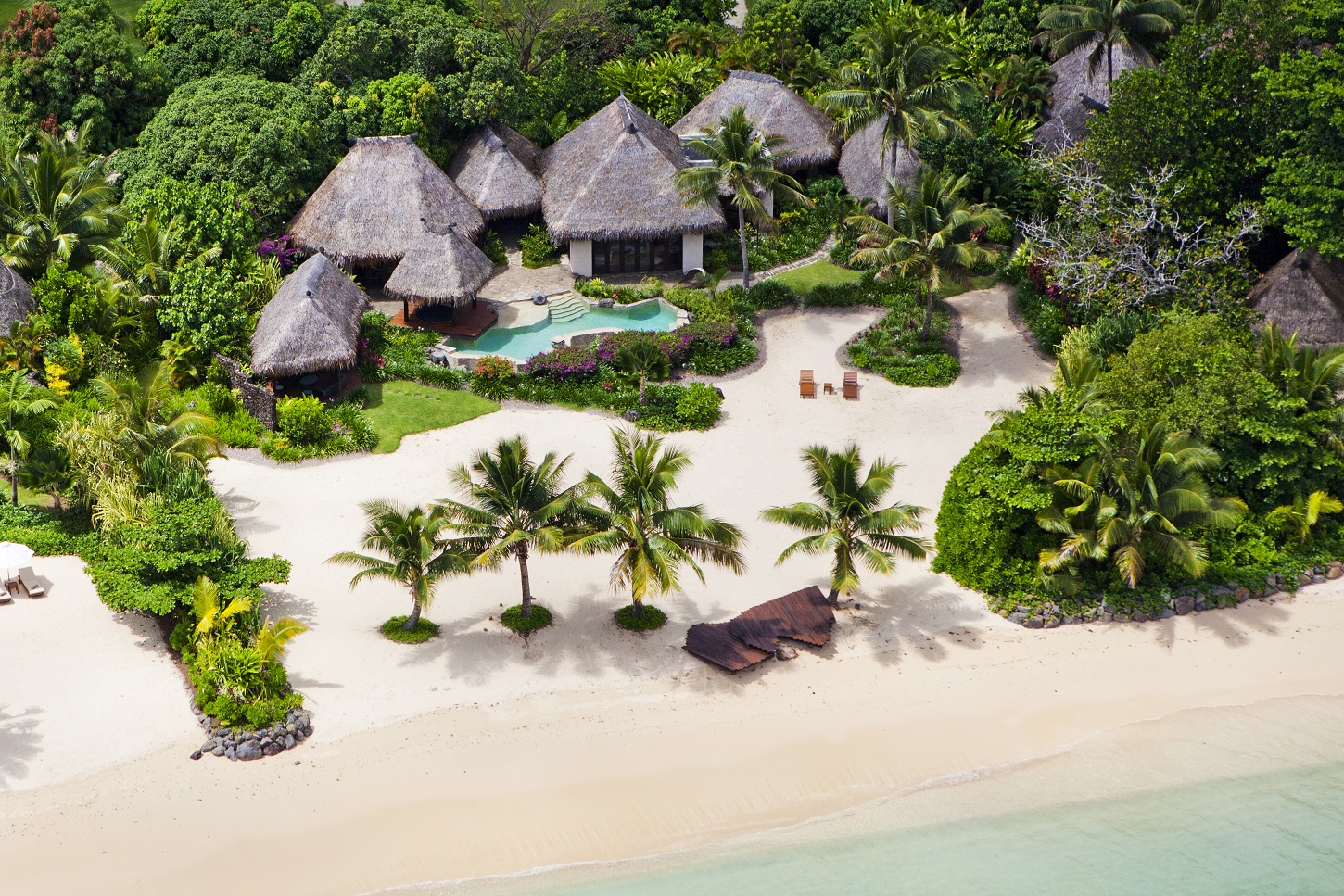 One of Laucala’s entry-level Plantation one-bedroom villas, with its private gardens, beach and outdoor pavilions

Each building is crafted from local hardwoods and decorated in a masterful blend of traditional Fijian themes with bespoke luxury; just one example being the immense “jellyfish” lampshades, unique to Laucala, that hang like primitive chandeliers from the fascinating network of rope-bound timber rafters.

The overall aesthetic of dark timbers, billiard-table green lawn, white sand and blue ocean demands that every photo be tagged #nofilter. The scene glows with an almost super-natural crispness. It takes some time to realise this is because blurry lines are being constantly excised. 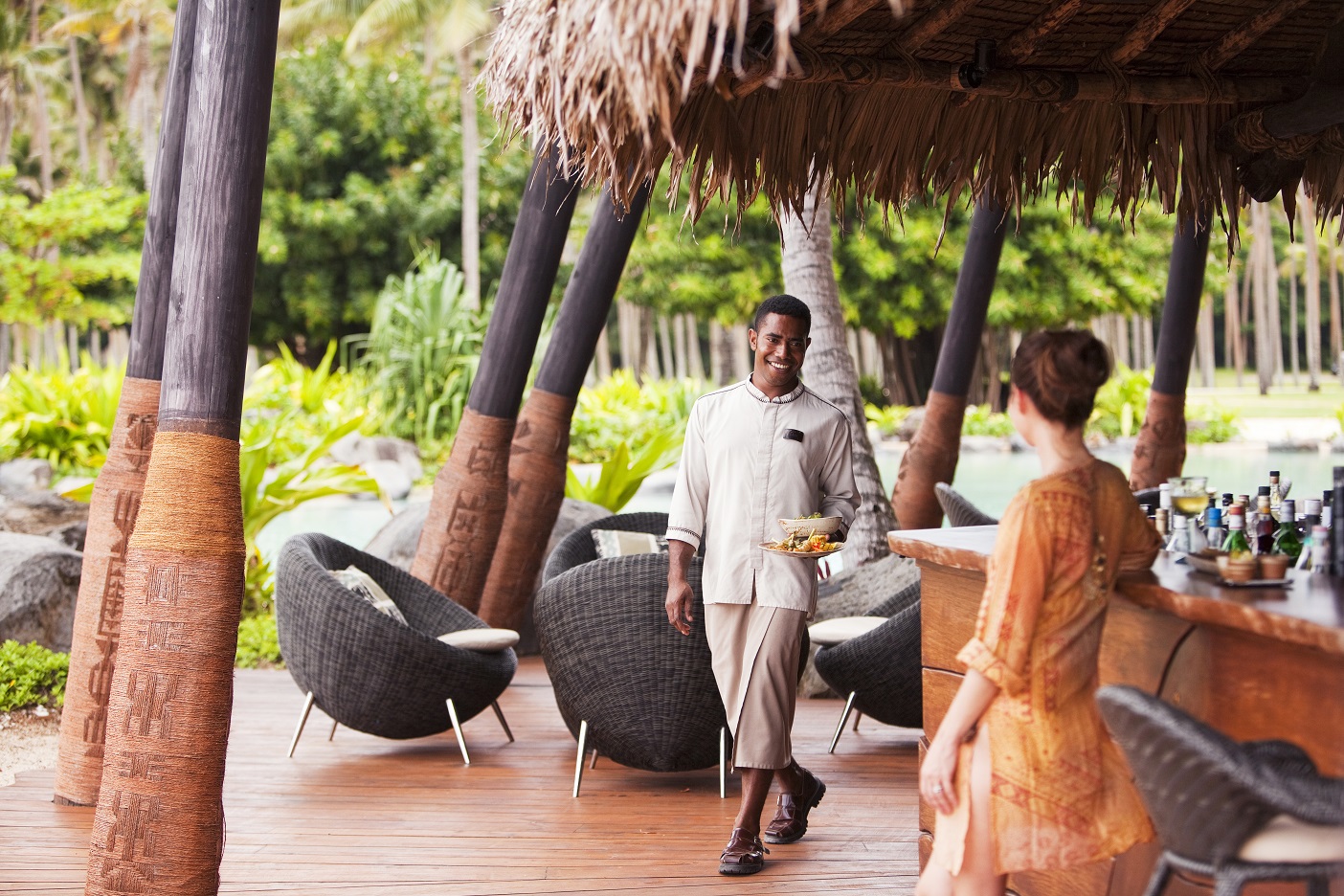 Ambience and smiling servce at the Beach Bar

One does not see untidy edges, peeling flakes of paint, drips of rust down the sides of swimming pools. Irrespective of the number of guests (which totalled just four, during my stay), every restaurant table is set. Pebbles accidentally kicked onto the path on my way to dinner were magically gone when I returned; my golf cart, hurriedly parked nose-in at the clifftop Seagrass Lounge, had rotated 180 degrees during dinner, its rain curtains lowered against intervening showers.

At the risk of torturing the Teutonic stereotype, this is Fiji done by an Austrian.

There is clearly a lot going on behind the scenes, though at the same time, the service is utterly unobtrusive; the highest staff-to-guest ratio in the world manifests not in endlessly scurrying golf carts – very much the opposite – but as an elevated level of attentiveness and caring. With so few guests, those one-on-one interactions – whether with the golf pro, the spa staff, the water activities team members, the personal concierge who each day leaves incredible, freshly-made cakes and pastries – soon lull you into feeling like a family member whose uncle owns the place. 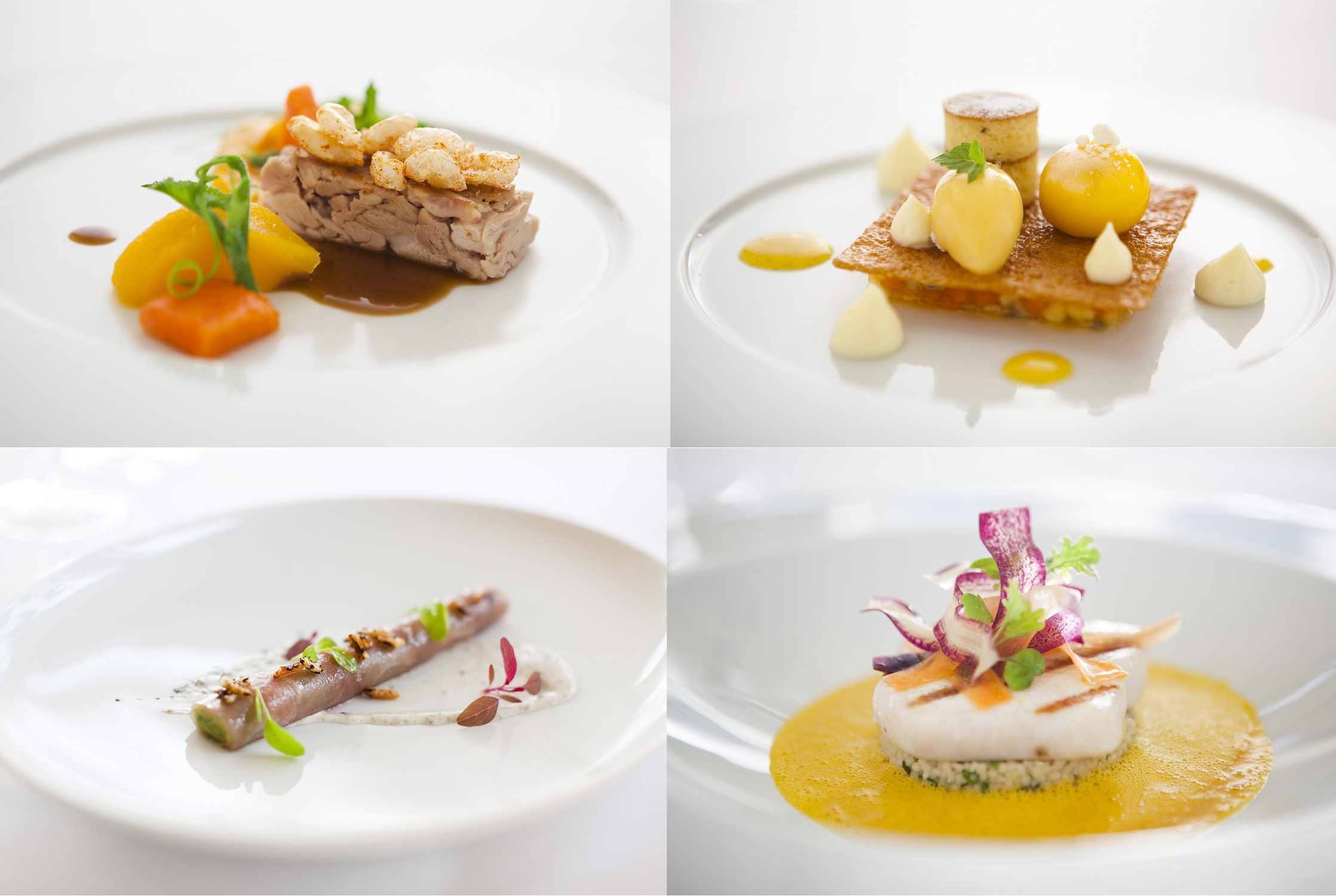 Our first dinner was at the Plantation House, a degustation menu that included lobster with watermelon sorbet, followed by baked fennel, then A5 Wagyu Angus fillet – all these ingredients sourced from the farm, mere hundreds of metres away, where chef Nico and gardener Pedro enjoy the ritual of personally picking the day’s vegetables and herbs. Guests are made very welcome to join them.

The following day, my wife and I enjoyed lunch with executive chef Jean Luc in his kitchen, watching and chatting as he personally prepared the meal. A stunning dinner followed at Seagrass followed, perched among treetops with views across to the neighbouring Qamea island, home to many of Laucala’s staff and to the artisans and performers of Laucala village’s wonderful cultural activities.

Our final meal, the next day, was to be something quick at the Pool Bar. Instead, Jean Luc popped in with a prepared Szechuan lobster dish: “I picked up that you both liked Asian food, so I thought I’d do this for you …”

Such service never feels contrived nor forced, and applies equally to the many guests who will opt never to leave their villa for the duration of their stay. Indeed, it’s quickly evident that, from the point of entering the lounge at Nadi, one can completely and confidently disappear from view; even to the extent of being protected by Laucala’s negotiated sea and air exclusion zones. 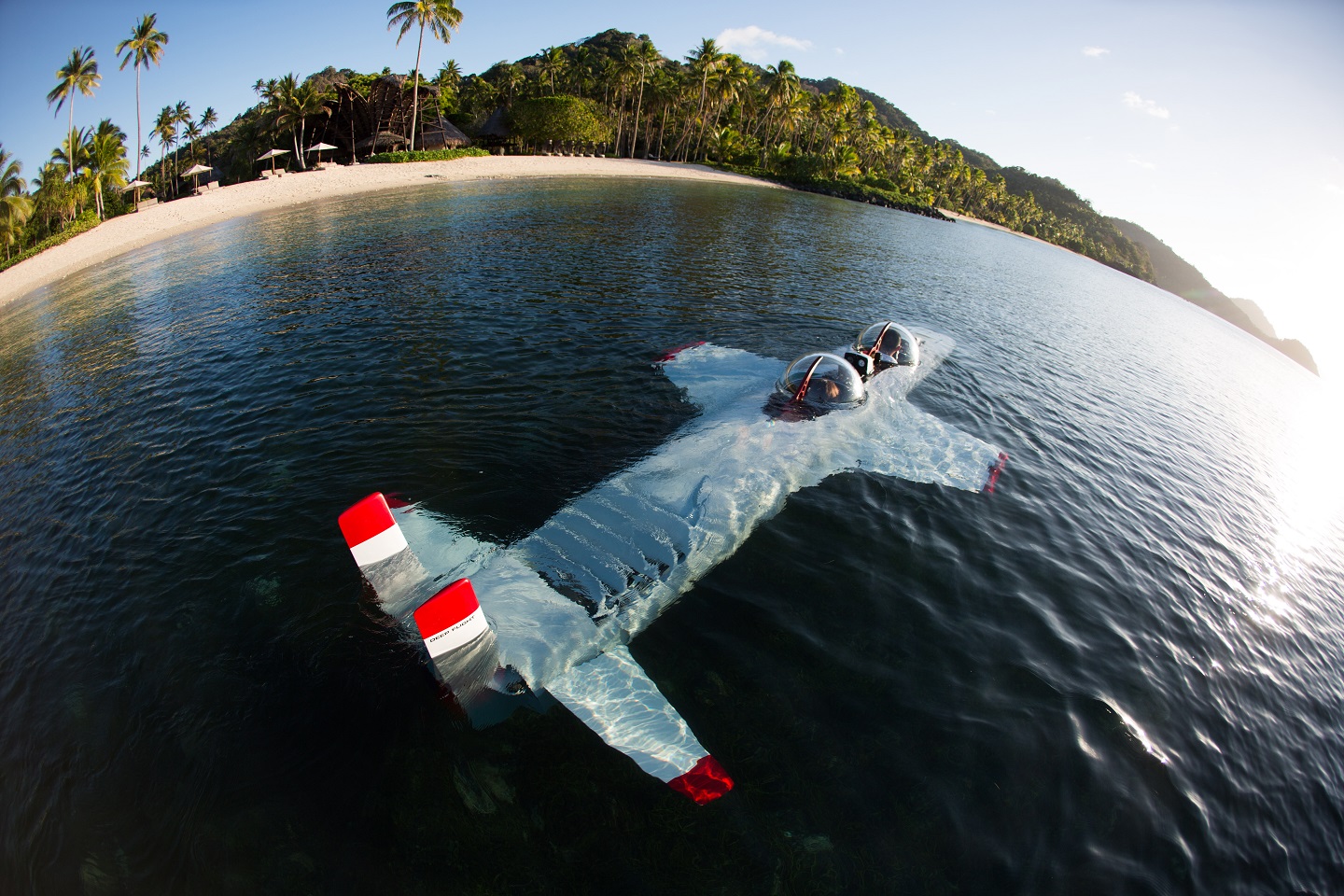 Laucala’s $2.4m Deep Flight submarine – one of only a handful in the world – is at your service

Images and words can’t fully communicate that which elevates Laucala Island beyond an outstanding, five-star luxury South Pacific experience. It lies in the eager attention to detail, the efficiency and circumspection of the staff, the excellence in absolutely all things.

As we boarded the King Air to depart, my wife and I once again having the plane to ourselves, we were sung Isa Lei, the ubiquitous Fijian farewell song. It speaks of the joy of one’s visiting, sadness at one’s leaving, and the unforgettable beauty of Fiji. We did not need to own the island to own the feeling.