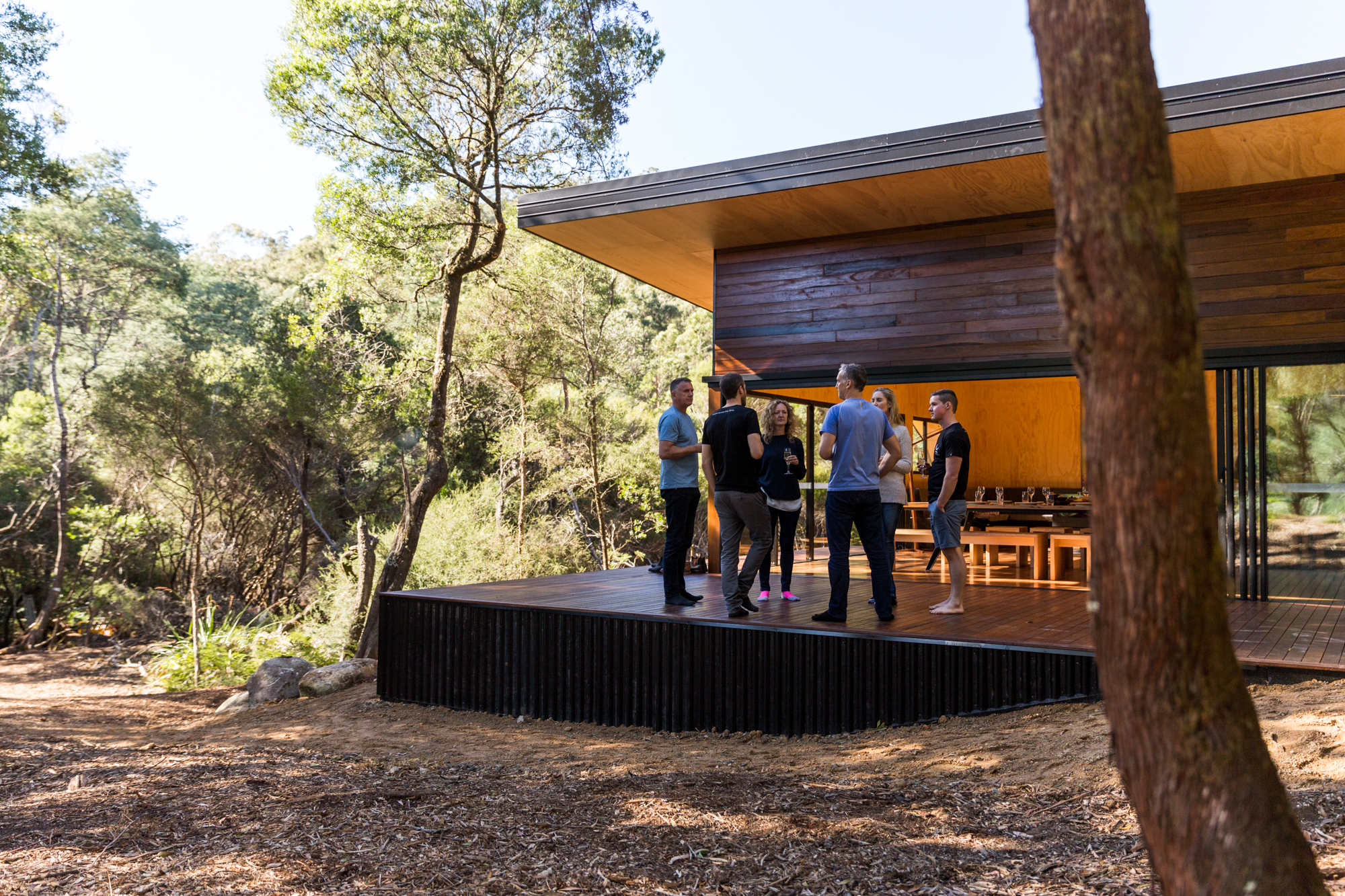 The Blue Derby Pods experience is one of the world’s best MTB experiences.

As we roll up behind two other riders on the winding dirt trail, my guide, Tam, slows down noticeably. Suddenly she veers left onto a barely marked track in the Tasmanian rainforest, motioning for me to follow. “We can’t let anyone see us,” she loud-whispers, as we ride deeper into the bush. 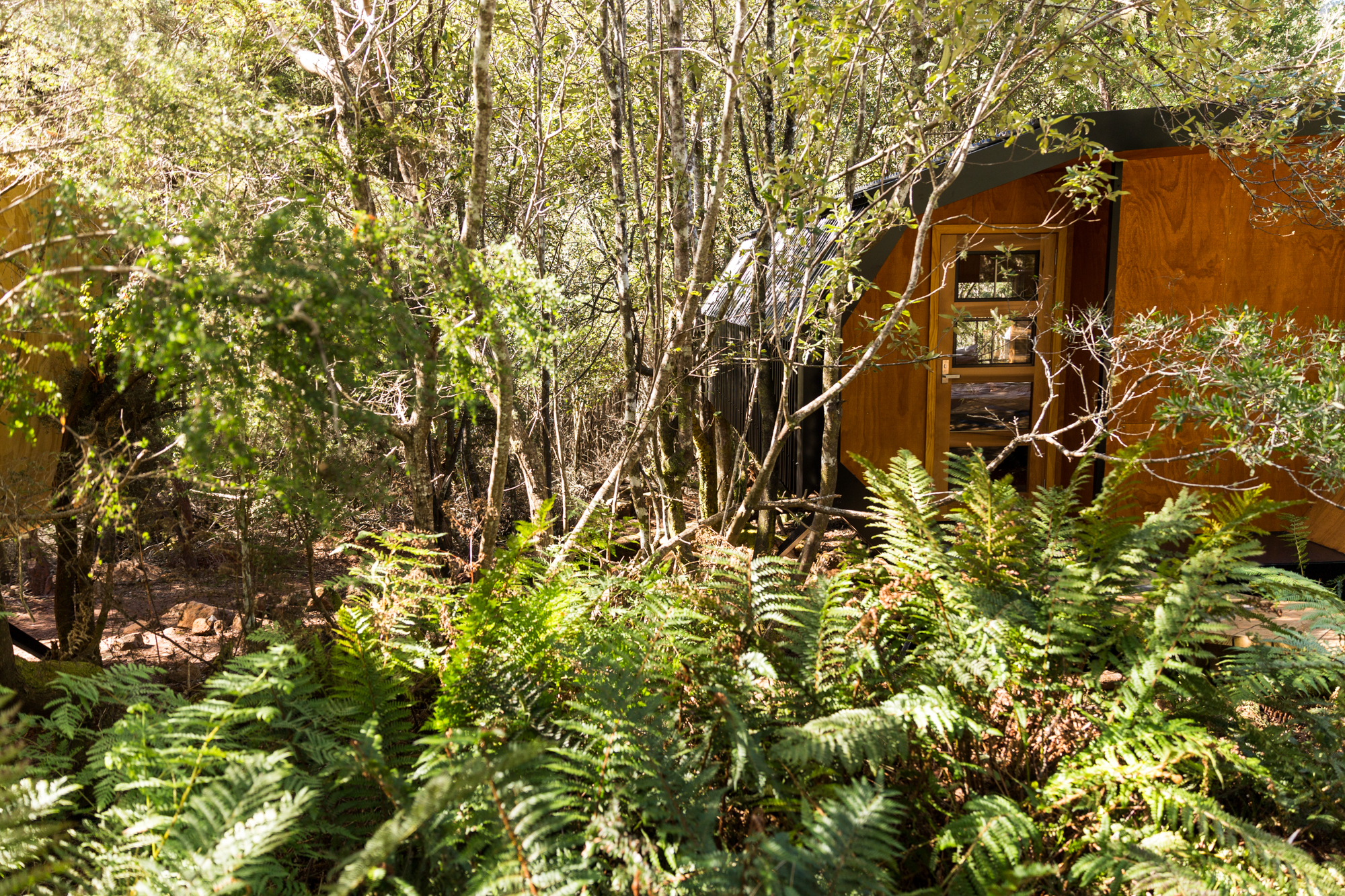 In 20 seconds we emerge into a clearing, where it looks as if a benevolent alien race has beamed down a cluster of small, curvaceous dwellings for its exclusive use. We are in the epicentre of a large mountain bike trail network that rivals anything currently in existence in the world … yet few know that these buildings are even here.Welcome to the Blue Derby Pods Ride, the brainchild of young couple Steve and Tara Howell, who saw an opportunity to add a unique accommodation experience in the midst of a reboot of Tasmanian tourism.

The former tin-mining town of Derby, 90 minutes’ drive northeast of Launceston, has been reborn through the addition of a mountain bike trail network that’s bringing riders from all over the world. 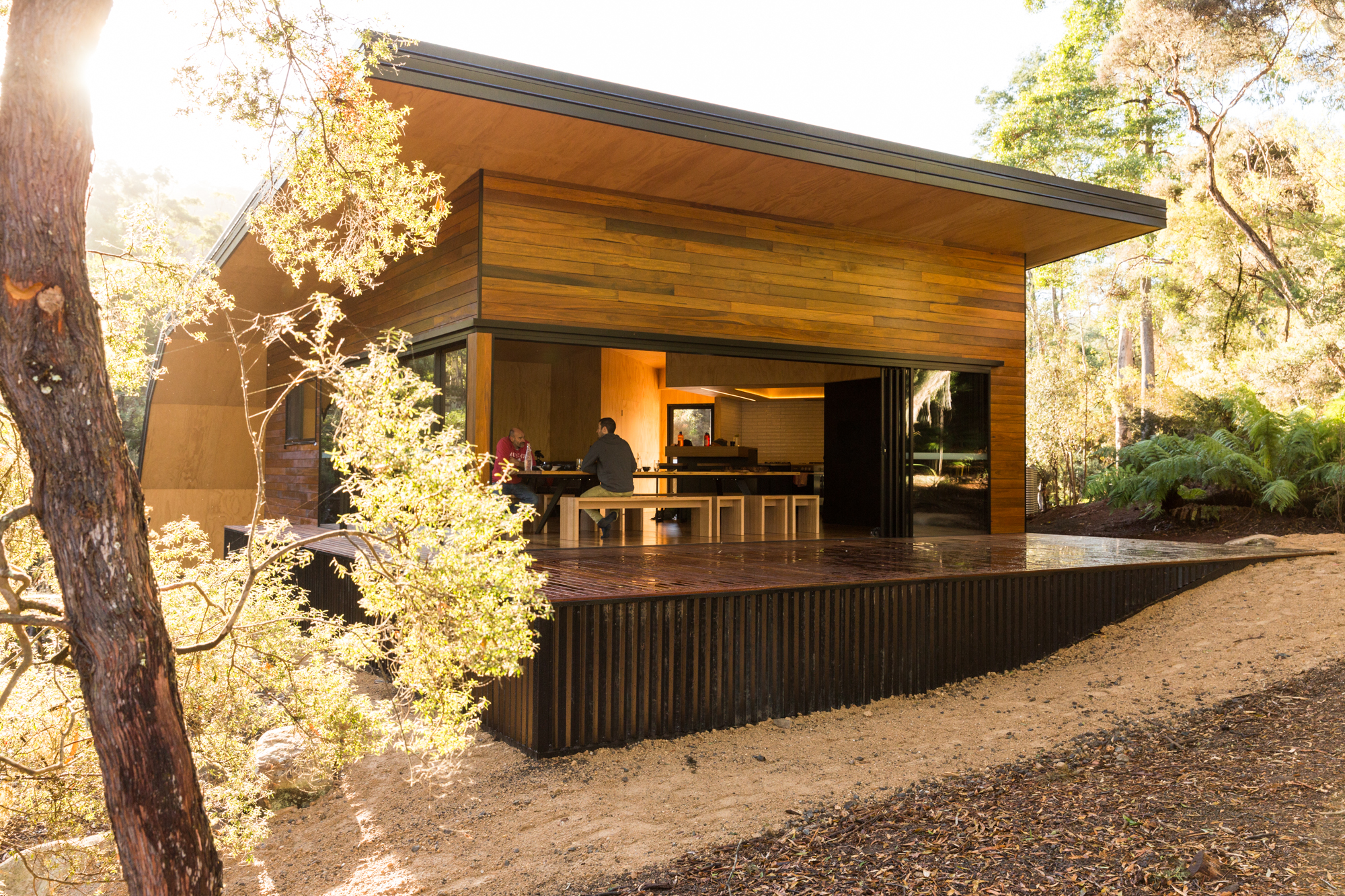 More than 83 kilometres of trails have been etched into a stunning variety of terrain, with trails like Blue Tier and Atlas immersing rookies and pros alike in surrounds that Lord of the Rings director Peter Jackson would reject for being too lush and picturesque.In the midst of this impossible beauty lie the pods, five prefabricated structures that were mostly walked onto the site over six months in early 2016 by Steve, Tara and their family.

The couple had been planning a premium eco retreat when the first stage of the Blue Derby trail network, costing around $3 million, was announced; a second impetus was the impending arrival of the world’s mountain biking media for a round of the 2017 Enduro World Series.The pods are complemented by a large communal space known as the Hub, which houses a long dining table, a lounge area and two walls of sliding glass that bring the Tasmanian wilderness right inside the building. 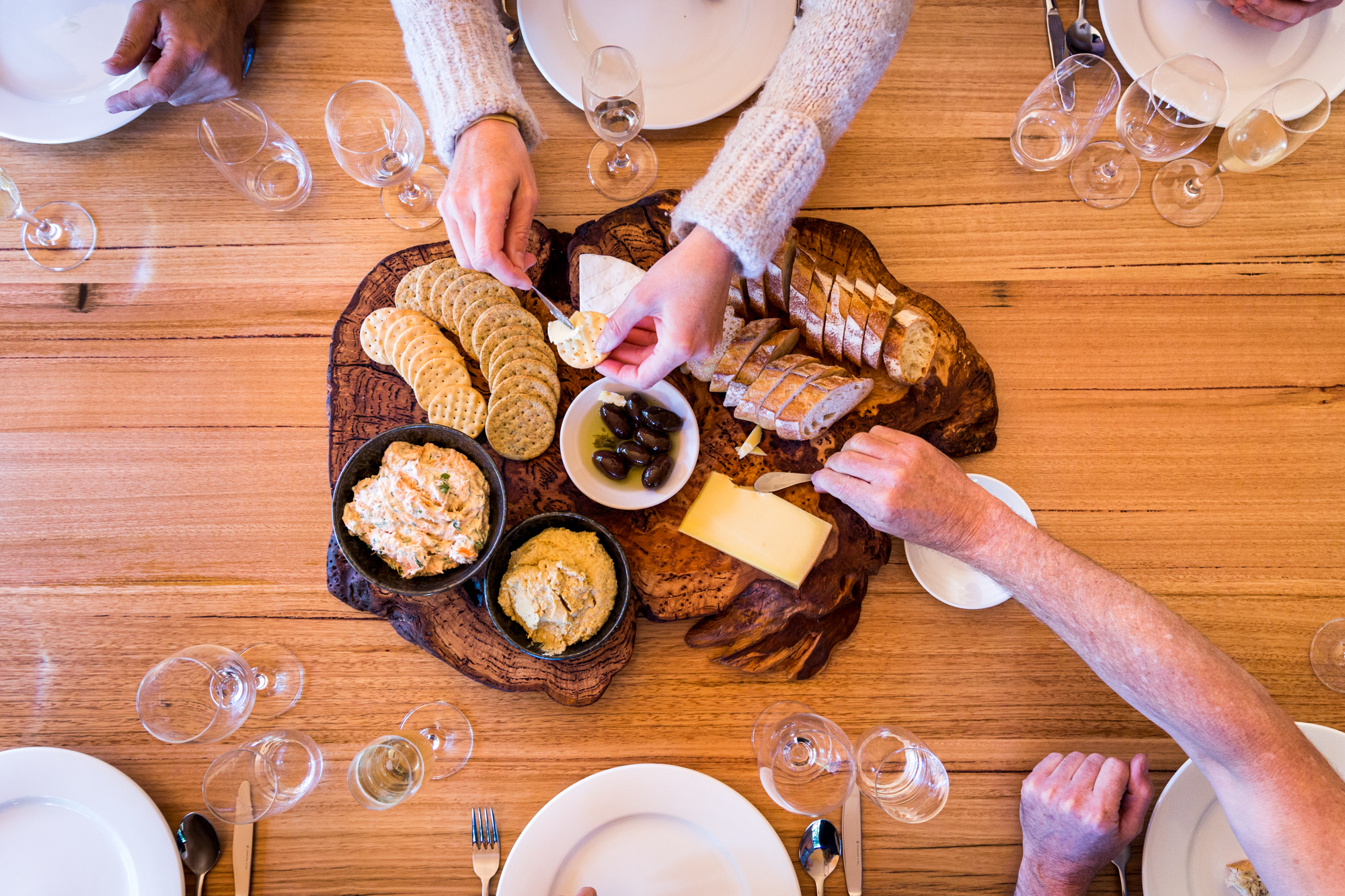 The area is large and sparsely furnished, but is warm, soft and relaxing.The pods themselves accommodate two people each, in either single or twin configuration. The curved, bare pine-sheeted walls frame a simply enormous window, again putting nature front and centre. Inside the cleverly simple pod there’s no air con and no power points – just a huge bed as the focus.

It’s an amazing place to retreat.And this is a ride retreat. Steve and his team know every metre of the Blue Derby network. The trails are built around a difficulty grade system of green (easiest) to black (only pros need apply), and the team can cater to both ends of the spectrum on the same trip. 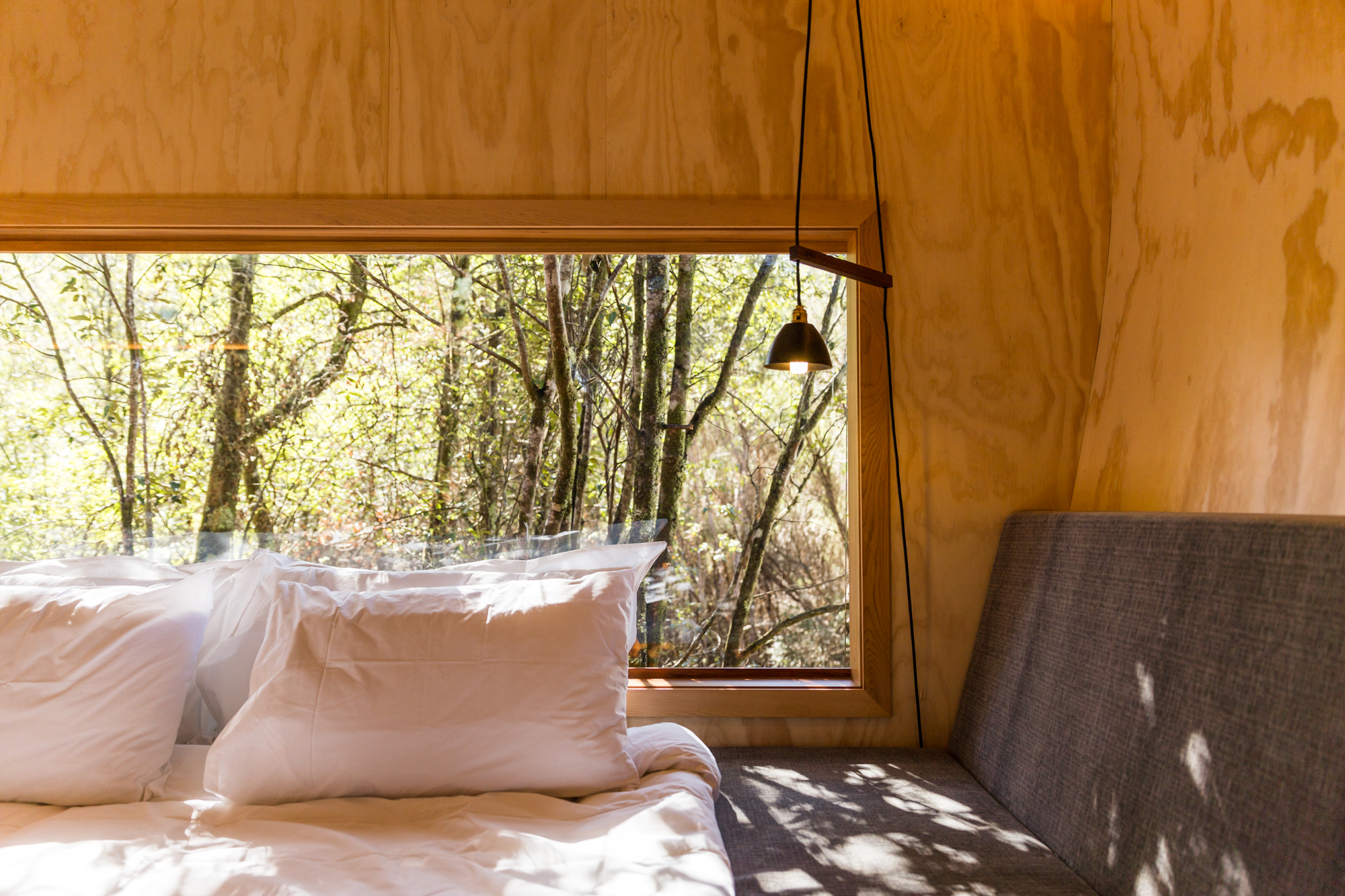 The pods welcome returning riders with showers that open onto nature, before the Hub lures with local gourmet produce that’s prepared by some of the region’s best providores. Baby potatoes in salsa verde come from nearby Scottsdale, while the organic greens hail from York Town. The confit duck is (or was) a local, and the Devil’s Corner Resolution pinot noir is a standout in a state already famed for the light red.

It’s easy to be initially bemused by the apparent lack of facilities within the pods – but the absence of window-blinds and mini-bar is not the point of this place. The Pods offers a rare chance to step away from the world, in an amazing environment with incredible food and wine, and access to the best mountain bike trails on earth.