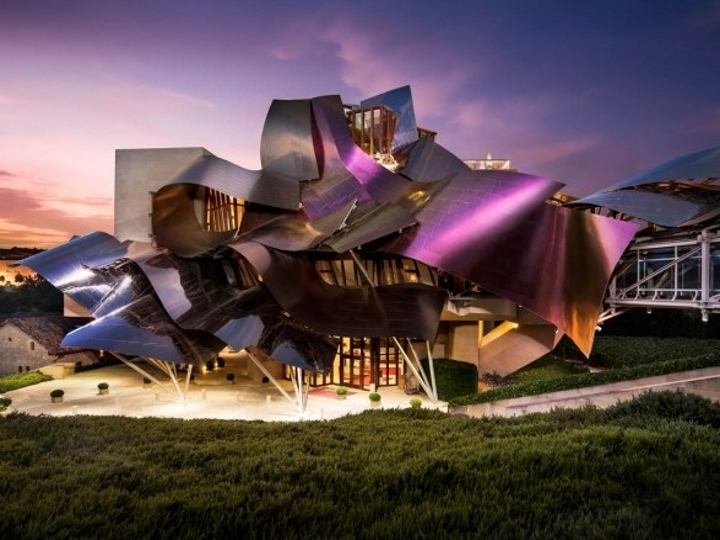 Inside the world’s most amazing hotel architecture

More and more, architects are adding hotels to their portfolios for design-lovers to check into and check off their bucket lists.

Sure, you could tour some of the world's most famous architectural landmarks. But how about stay the night, too?

More and more, architects are adding hotels to their portfolios, creating high-style hubs for design-lovers to check into and check off of their bucket lists. Here, we go inside seven hotels designed by the world's most acclaimed and awarded architects.

Frank Gehry is arguably the most famous living architect — and for good reason. His awe-inspiring designs, from the Guggenheim Museum Bilbao in Spain to the Walt Disney Concert Hall in Los Angeles, have the power to turn little-known cities and underrepresented neighbourhoods into major tourist destinations. Comprised of a series of pink, gold, and silver titanium ribbons, the hotel's architecture was inspired by the winery's iconic bottle, reflecting the pink hues of Rioja wine, the silver foil covering the cork, and the gold mesh that adorns every bottle.

Inside, Gehry's touches are also evident, with furniture, lamps, and headboards designed by the architect exclusively for the hotel. The hotel's opening in 2006 set off a major movement for Rioja wine, bringing tourists — and more architects — to the now popular Spanish wine country. (hotel-marquesderiscal.com) In a city filled with iconic architecture, the Four Seasons Hotel New York stands out. Designed by the Pritzker Prize–winning Chinese-American architect I.M. Pei, the commanding structure located on 58th Street between Park and Madison Avenues combines art-modern flourishes with Gatsby-style glamour, and utilises the same limestone on its façade that was used in Pei's iconic Louvre Museum expansion. Always the perfectionist, Pei wandered past the building for years after its 1993 completion, dreaming up ways he could improve on his Manhattan masterpiece. In 2004, the hotel's owner, the emperor of Beanie Babies, Ty Warner, gave Pei the opportunity to take a second look at the Four Seasons' top-floor penthouse, allowing him and architect Peter Marino to convert the ho-hum suite into the city's most spectacular and expensive, at $US50,000 (about $A66,280) per night, Ty Warner Penthouse.

This year, as Pei turns 100 years old, the hotel will unroll a series of celebratory packages to honour its famed founding father. (fourseasons.com) Zaha Hadid was not just an architect, but an inventor of spaces. Known for her cutting-edge structures that pushed technology and design to the greatest extremes, the Iraqi-born, London-based architect was the first woman to win the Pritzker Architecture Prize.

Though Hadid died unexpectedly last year, she left behind an unrivalled legacy that includes a number of uncompleted works, including China's Jumeirah Nanjing. Expected to open late this year, the hotel, which will be a part of a large mixed-use development in Nanjing's new Hexi business district, will feature 250 rooms (with 32 suites), multiple dining venues, and a Talise Spa.

Typical of Hadid's avant-garde aesthetic, the structure will feature the bold lines and striking curves for which the architect was so adamantly revered. (jumeirah.com) High above Lake Zurich, surrounded by forest, the castle-like Dolder Grand originally opened in 1899 as a country getaway. Today, thanks to reconfigurations and modern interiors by Lord Norman Foster, the historic hotel is a lavish urban retreat.

Upon restoring the Belle Époque exteriors to their former grandeur, Foster — whose London-based Foster and Partners has been behind such award-winning structures as Manhattan's prismatic Hearst Tower and London's orb-like City Hall — added a cutting-edge, energy-efficient wing that both complemented and elevated the existing historic structure. Today the hotel is not just an architectural marvel, but an artistic one as well, featuring a world-class collection of works from the greatest artists of the past and present, including Fernando Botero, René Magritte, and Andy Warhol. (thedoldergrand.com) Ludwig Mies van der Rohe is considered a pioneer of the modernist architecture movement. The German architect — best known for his Barcelona Pavilion (and the iconic Barcelona chairs found inside of it) — was a figurehead in the Chicago architecture scene, leading the city's Bauhaus movement throughout the 1940s.

Mies van der Rohe's final project was Chicago's IBM Building, which was completed four years after his passing in 1973. But it wasn't until 2013 that the project became a luxurious hotel when Langham Hotels completed its lovely Langham Chicago. Occupying the second through 13th floors of the structure, the hotel retains a few Mies trademarks, like travertine stone and thermopane windows (a cutting-edge revelation during the architect's days).

But though suites include Mies-designed chaise lounge sets, the overarching design is decidedly un-Mies with opulent and glittering decor that, though warm and welcoming, stands in direct opposition to the architect's modernist "less is more" ethos. (langhamhotels.com) Conceived by the Pritzker Prize–winning French architect Jean Nouvel —whose acclaimed projects have included the Philharmonie de Paris as well as countless luxury high-rise developments — the slightly aslant hotel was conceived as living art, with large walls of glass and brightly patterned ceilings that seem to embrace the cityscape and Danube River. Despite the avant-garde tone in the public areas, Nouvel's guest rooms are simplified for more comfortable stays, featuring a white-grey-and-black colour palette with luxuries like sliding shoji screens and large soaking tubs in the bathroom. (sofitel.com) The firm — which has completed such well-known projects as the Andy Warhol Museum in Pittsburgh and the Georgia O'Keeffe Museum in Santa Fe — utilised its artistic background to create in Mii Amo a haven that draws from its craggy red-rock setting, constructing facades of natural materials such as adobe brick, wood, and indigenous stone. Simple lines and the repeated motifs of water, earth, and sunlight mirror the terrain, imbuing an air of tranquillity. The entire resort, from its skylit Crystal Grotto to its adobe spa accommodations, evokes the sense of a living art installation utterly in tune with its ecological setting. (miiamo.com)