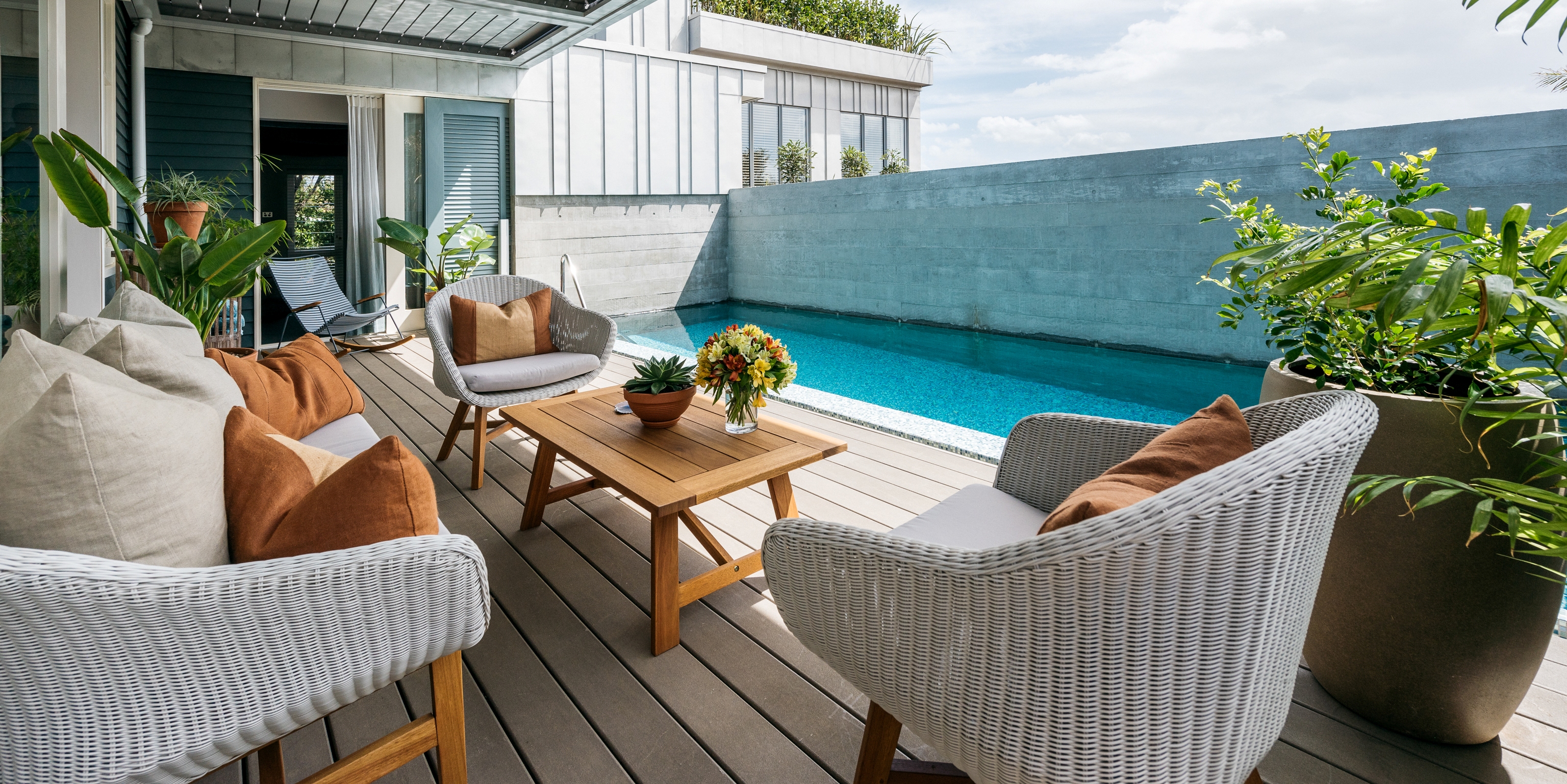 Gather and relax: The Boatshed on Waiheke Island adds new options for groups travelling together.

Often regarded as the Byron Bay of New Zealand, Waiheke Island has matured with an explosion of wineries and other small producers, restaurants and a vibrant fine art scene.The island is just a 35-minute ferry ride from Auckland, or 10 minutes by helicopter or seaplane. Though several thousand people commute to Auckland, the island really comes into its own during summer holiday season, when the population swells to between 30,000 and 40,000, and superyachts crowd the harbour. New Zealand’s richest man, the notoriously private Graeme Hart, also has a home on its northern tip.The Boatshed, one of the pioneers of tourism on Waiheke, opened 15 years ago as a European-inspired boutique luxury hotel, overlooking the vast blue of the Hauraki Gulf.

Walking into The Boatshed is like stepping into a dear friend’s fabulous beach house, the scent of salt spray mixed with log fire in your nostrils. It has a relaxed barefoot ambience, eschewing the formality of a large hotel. Owner and designer David Scott’s original vision for The Boatshed, which is managed by his son Jonathan, was “for a building where people will come and gather, move on, and return, from all walks of life, from all countries”. And come they do – increasingly as family groups, as returning expats from New Zealand and the UK entertain holidaying relatives.

To meet demand for bigger spaces, The Boatshed just opened two new accommodation options – The Watertower and The Owners Cottage.Though The Watertower was inspired by rural water tanks, Scott has thrown off the cliché of corrugated iron and instead created a four-storey zinc-clad structure with a spiral staircase joining various spaces – from the ground floor gallery, which houses two vintage cars; to a dressing room and sleeping annexe; to the top day room and roof garden, including an outdoor bath. 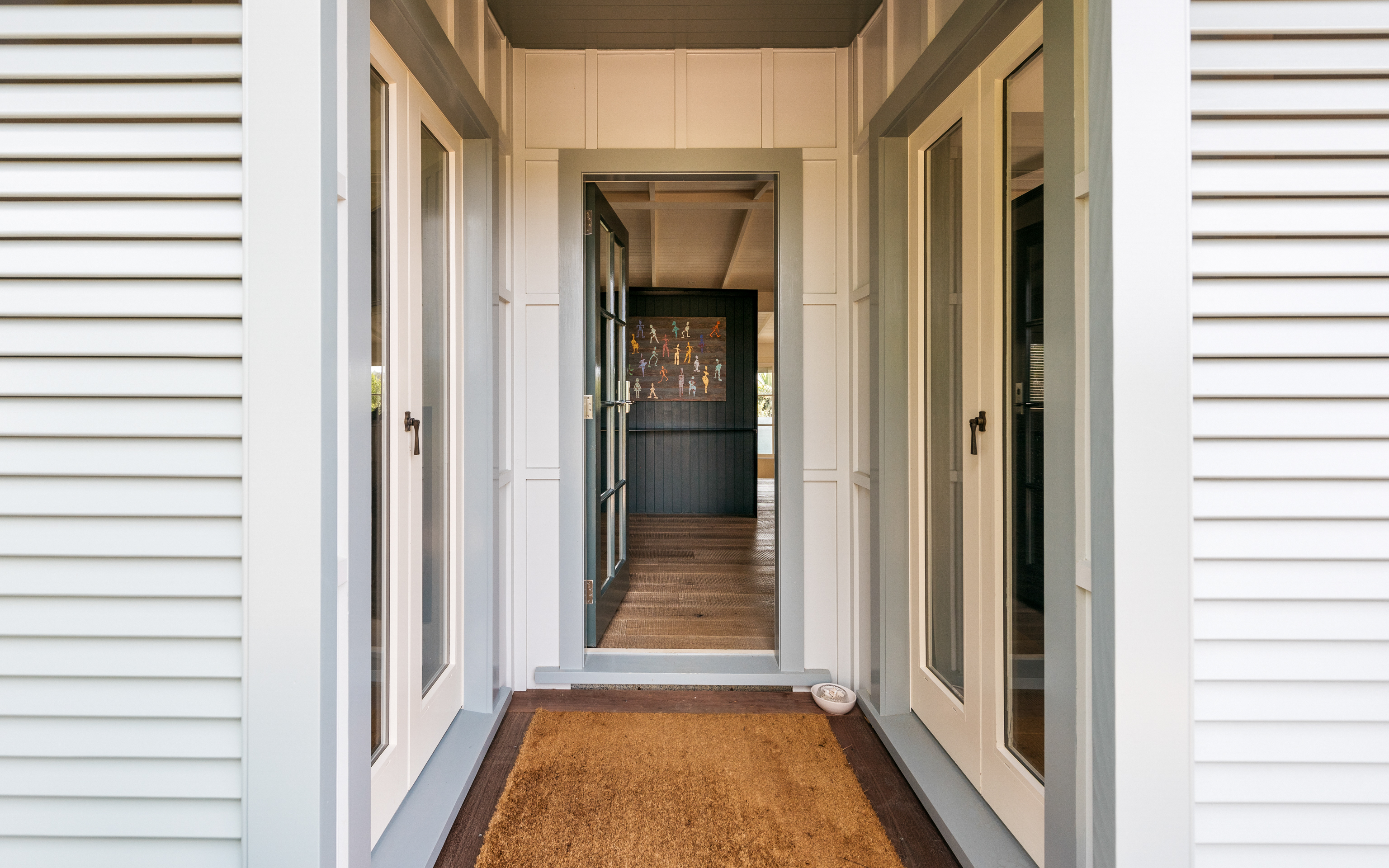 The Owners Cottage provides a special opportunity to experience Scott’s design sensibility, and “the things I am finding it interesting to be surrounded with”. Bemoaning the lack of personality in many owners’ cottages, often decorated as “quasi hotel rooms”, Scott has instead mixed the best of the late 1800s, 1920s, ’30s and mid-century modern, garnished with intriguing objects such as a matt walnut baby grand piano, a carefully curated selection of books, and a customised Aga cooker, “because I have always said one day I am going to have an Aga”.

The Watertower and Owners Cottage have been connected by a pool and cabana, which can be used either as an additional king bedroom, as a yoga and massage room, or closed off when not required – allowing guests the flexibility to book the configuration that meets their needs. Secret entrances mean both options can be staffed and serviced from a full kitchen. The food at The Boatshed deserves special mention. Dinner, exclusive to in-house guests, is a four-course table d’ hote menu, starring local meat and seafood, and organic produce, some of which is grown in the on-site vegetable gardens (among which the quirky day spa is tucked). With dishes such as house smoked salmon with a horseradish cream, New Zealand lamb cutlets with salsa verde and a witlof and blue cheese salad, and a chocolate and pistachio tart accompanied by yoghurt sorbet and chocolate soil, it is spectacular without showiness. 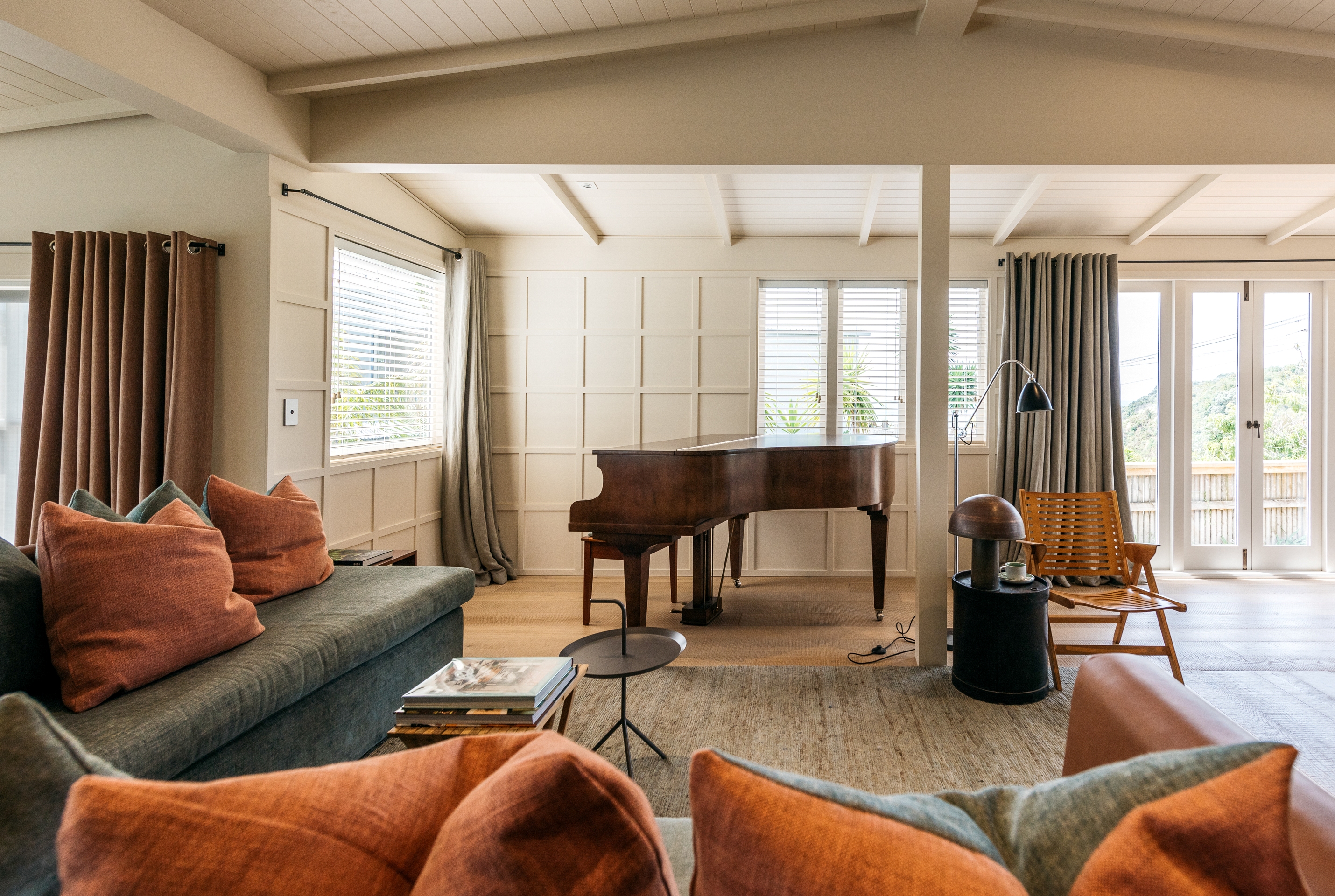 Guests will dream for weeks about the breakfast of ricotta hotcakes with caramelised banana. Providing the perfect base to explore the island or further afield, The Boatshed can organise excursions such as helicopter transfers for golf at Kauri Cliffs or Cape Kidnappers. It’s also a short stroll to the white sandy beach of Oneroa or its main shopping strip of boutiques and cafes. Then again, you might prefer to remain ensconced, glass of local wine in hand, mesmerised by those endless sea views. In the words of one guest, it’s “heaven on Earth”.

A unique climate and island terroirmeans Waiheke produces some of New Zealand’s best wines, with wineries such as Mudbrick and Cable Bay among the most famous. Here are some other spots worth a visit: Chandeliers made from old grapevines preside over the enormous dining room at Tantalus Estate, recently revived with a reputed NZ$20 million redevelopment.

Perhaps most intriguing is the private dining room, which features a collection of antique tantaluses (small lockable cabinets for decanters) – often used for functions and meetings where discretion is paramount. Round-the-world sailor Stephen White established Stonyridge Vineyard 35 years ago, having chosen the site as an ideal location to produce classic Bordeaux-style red wine. Today, the Stonyridge Larose has become an internationally renowned wine.

Stonyridge is also a hotspot for international celebrities visiting Waiheke – among them Taylor Swift, Quentin Tarantino and Venus Williams – who can conveniently park their helicopters at the vineyard’s entrance. A 300-year-old Italian granite millstone marks the entrance to Rangihoua Estate, brought to New Zealand by owners Colin Sayles and Anne Stanimiroff, who planted their olive grove in 1996. Their olive oil was named as one of the world’s best in the Flos Olei 2018, the rigorous Italian competition, scoring 96 out of 100. Luxury Waiheke organises rentals of some truly stunning properties around the island, if you’re travelling with a larger group.

Guides from Ananda Tours know Waiheke’s secret spots inside out, and their Ananda Black VIP service will whisk you around the island in ultimate comfort – whether your interests lie in art, food or wine.

Auckland Seaplanes flies from Auckland Harbour to Waiheke, offering a bird’s eye view of the surrounding islands, and if you’re lucky, a pod of dolphins or orcas. You might have to get your feet wet as you disembark … but consider it the entree to island life.