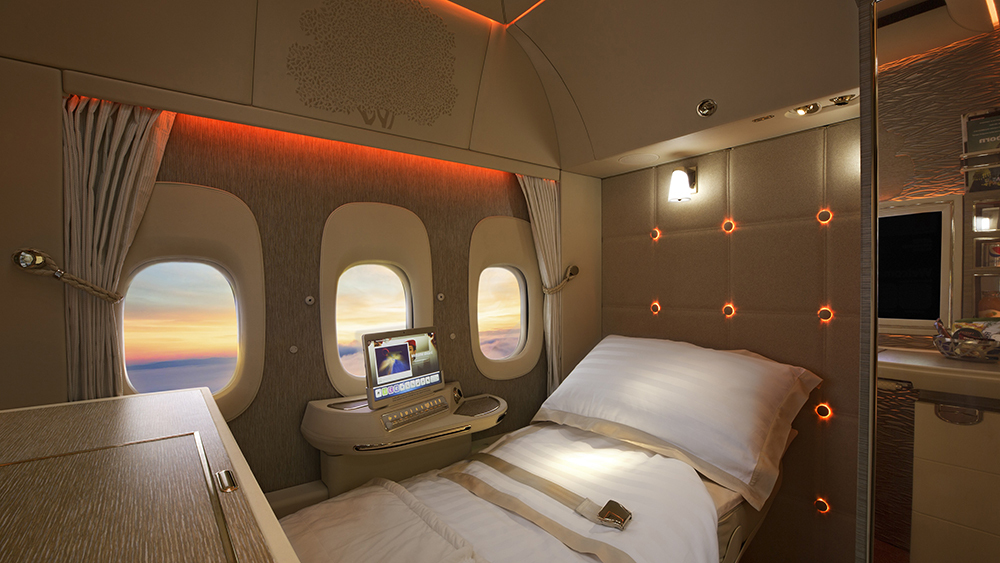 The suite itself and its virtual windows are among the 24 finalists for the prestigious prize honouring aircraft cabin innovations.

If you’ve flown first class in an Emirates airline Boeing 777, you may have experienced two—or maybe just one, depending on where in first class you sat—of the cabin features that are finalists for this year’s Crystal Cabin Awards. Most of the 24 finalists (three in each of eight categories) are still just concepts, but Emirates’ fully enclosed first-class suites went into service more than a year ago, in December 2017, initially on the airline’s Dubai–Geneva and Dubai–Brussels routes.

The first-class cabin of an Emirates 777 is configured to include a total of six suites—two along each exterior wall and two in the center of the cabin. The middle suites are equipped with another Crystal Cabin finalist: virtual windows from Collins Aerospace (formerly Rockwell Collins). Thanks to high-definition cameras positioned on the outside of the aircraft that project real-time video on the window-shaped LED screens on the walls of the middle suites, passengers in those suites have the same view as their fellow travelers in the suites with actual windows. 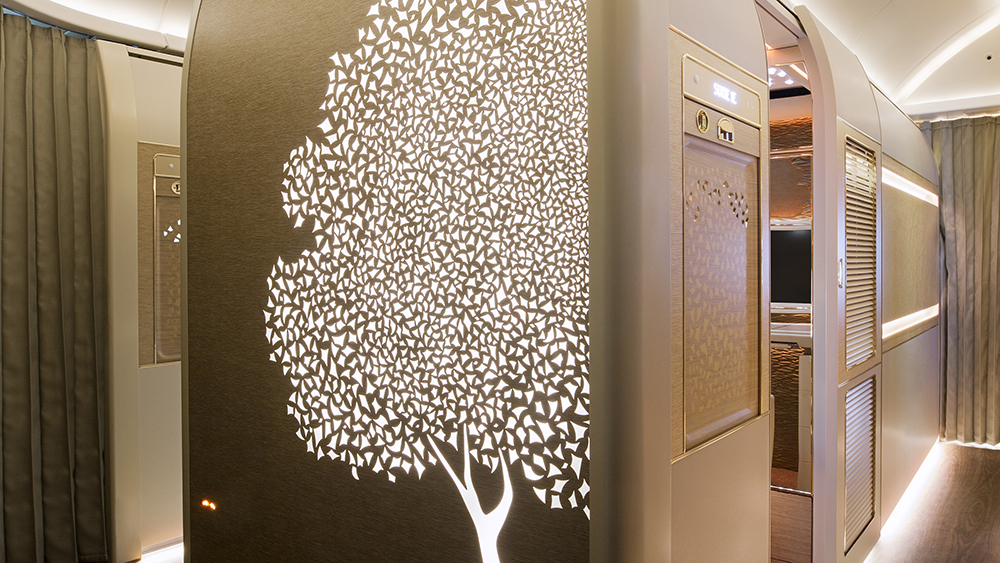 The Crystal Cabin winners will be announced April 2 during a ceremony in Hamburg, Germany, as part of the Aircraft Interiors Expo trade fair. Launched in 2007 by Hamburg Aviation—an association of the city’s aviation-related companies, research institutions and educational institutions—the award is billed as the world’s most prestigious prize for innovations related to aircraft cabins. The winners will be selected by a panel of academics, engineers, aviation journalists and executives from airlines and aircraft manufacturers. This year, airlines, aircraft manufacturers, aircraft-industry suppliers and universities from throughout the world submitted a total of more than 100 new products and concepts for consideration for a Crystal Cabin Award. Those submissions were whittled down to a shortlist of 94 products and concepts from 22 countries. The shortlist was then further shortened to 24 finalists, including the Emirates first-class suites (in the Cabin Concepts category) and their virtual windows (in the In-Flight Entertainment and Connectivity category). 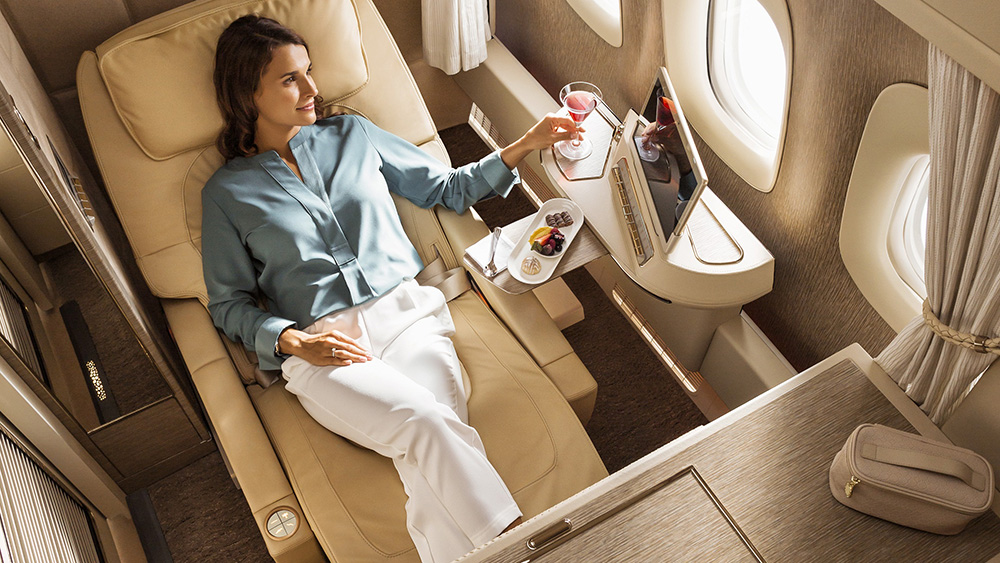 Mercedes-Benz S-Class was inspiration for the cabin design
Photo: Courtesy of Emirates Airlines

Each suite covers 3.7 square metres and has a floor-to-ceiling sliding door that closes it off from the rest of the cabin. Emirates says the design of the suite, including its leather and fabric upholstery, was inspired by the cabin of the Mercedes-Benz S-Class. The suite’s roomy leather lie-flat seat can be set to a zero-gravity mode, which gives you the sensation of being weightless. The suite is also equipped with a video-calling feature for summoning a flight attendant, lighting and temperature controls, and a 32-inch video screen for watching movies and television. And as noted, every suite is a window seat. 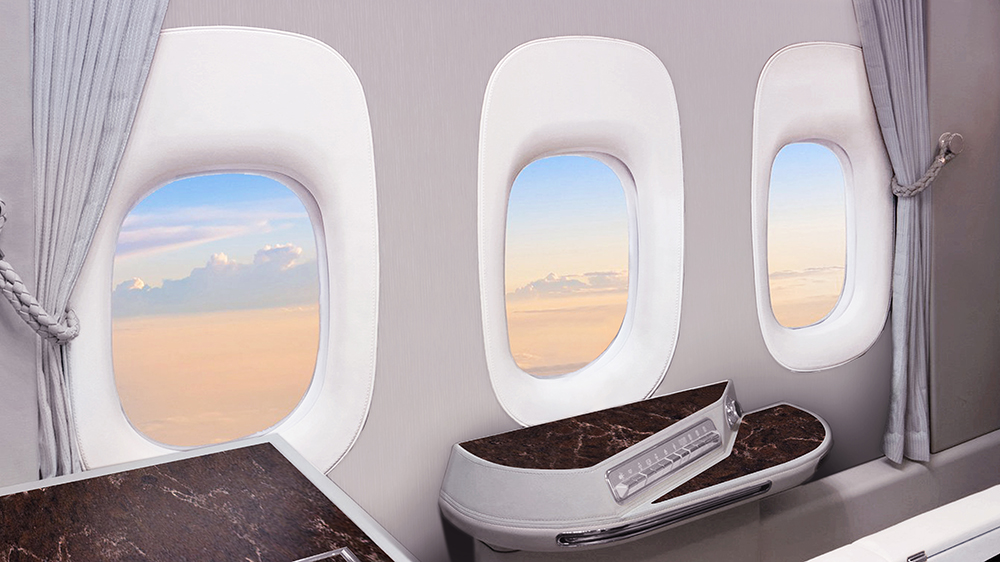 The Collins virtual windows are an industry first. Other attempts at producing similar technology have failed because the video could not accurately present the aircraft’s pitch and roll, which you have to do to keep passengers from feeling queasy; and/or the video would look like it was shot through a fish-eye lens or suffer from other types of distortion that, after a while, could have you reaching for the air-sickness bag. The Collins system produces high-definition, lifelike images. In fact, in extremely bright light or low light, according to Collins, the system provides an image that is clearer than what you would see looking through an actual window.