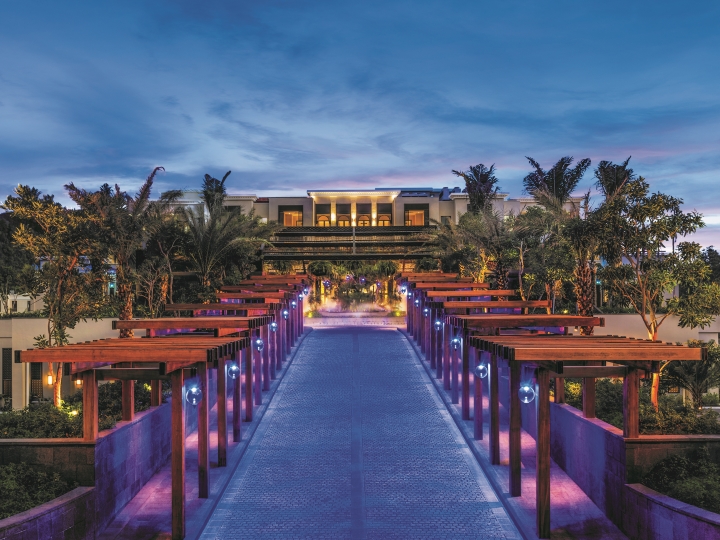 St Regis brings its signature grandeur and distinctive design to a new haven of relaxation.

You know you’re in a good place, literally and metaphorically, when the only concern that peripherally haunts your serenity is the prospect of seeing a small monkey. Even then, of the two main types that thrive on the Malaysian island of Langkawi, it’s only the light-brown Long-tailed Macaque that’s been known to abandon the legendary Langkawi hospitality at the sight of a food-bearing visitor.

The St Regis Langkawi, opened in April 2016, is the first luxury resort in more than a decade to grace the jewel-like island in the Andaman Sea, an hour’s flight north from Kuala Lumpur. It seems it’s a new beginning, as St Regis’s now sibling rival, Ritz-Carlton, will open later this year, on the opposite side of the island. Few rivals can equal the St Regis brand’s romantic heritage, signature elements of which are here elegantly merged with local mythology and Middle Eastern design influences. John Jacob Astor, who founded New York’s original St Regis hotel in 1904 and tragically perished in the Titanic disaster, would smile at the maintaining of traditions like high tea, a signature artwork above the St Regis bar and candles scented with his mother’s favourite floral arrangement.

A 30-minute Bentley-ride from Langkawi Airport, the St Regis Langkawi resort backs onto lush rainforest and overlooks a secluded bay with a 600-metre-long white sand beach. The sizeable property comprises 85 suites – 20 of them with private courtyard pool/spas – and a cluster of four overwater villas. The latter have, as a backdrop, 450-million-year-old rock formations that helped Langkawi earn its designation in 2007 as a UNESCO Global Geopark.

The theme that guided the resort’s architects and designers was “Rainforest meets the Riviera”. It’s as good a description as any. A warmth and welcome emanates from the point of arrival, a porte cochere of overhanging ferns and large sculptures depicting a local legend of seven cursed generations. (The eighth has already arrived, so just worry about the monkeys.) Beyond that paradise passage lies a grand lobby of Palladian crispness and scale, framing the water view beyond. Flanking the main body, with its imposingly high ceilings, is the sun-drenched l’Orangerie dining area with its adjacent Gourmand Deli, an expansive balcony for outdoor dining overlooking the ocean, and the St Regis Bar (above), with its intimate Decanter Wine Cellar boasting more than 1000 bottles.

The warmth and welcome oozes not only from the eager and effortless service – St Regis butlers are another cherished tradition – but from the very aesthetic of the architecture, interiors and appointments. Everywhere one looks, there is much to delight the eye and provoke thought. Various lamps, furnishings and artworks are quirky and completely uncontrived. Despite the scale, it has the authentic, eclectic feel of a private home.

The resort’s 85 suites begin with half a dozen Premier Rainforest Rooms, each of around 50 square metres. (These, theoretically, would be the first to fall to a Macaque invasion. In fact, the monkeys very rarely stray into the resort, so let’s finally lay that joke to rest.) The Andaman Sea Rooms are slightly larger and offer water views. The bulk of the accommodations, some 40 suites, are the St Regis Suites, varying from 68 to 90 square metres and with furnished balconies providing views over the gorgeously landscaped Resort Pool, beach bar-bistro and the ocean beyond. Above these St Regis Suites, and typically twice as large, are two Panoramic Suites, two Penthouse Suites and the Presidential Suite.

The latter is at least Prime Ministerial, Malaysia’s PM Najib Razak having occupied it some 12 months before the resort was even completed.

The ground-level accommodations are devoted to 20 St Regis Pool Suites and it is these that perhaps best embody the Langkawi experience. Each of 70 to 139 square metres, the rooms themselves are appointed in a style that again blends luxury with seaside ambience, but perhaps the most impressive feature is their seamless opening onto a courtyard where one’s private pool is overhung with a wispy, sun-shielding cloth canopy, and framed by inviting lounges and a giant day-bed. An antique wooden door at the base of the garden is within a few steps of the main Resort Pool and beach. Swimming in the shallow bay itself is best enjoyed at high tide, as the seabed at low tide can be somewhat muddy.

The perfect end to the day awaits at Kayuputi (“white wood”), the restaurant of which St Regis Langkawi is justly proud. Perched above the bay on pylons, resembling a beautiful private beach house, Kayuputi opens up through century-old doors that once graced the Dutch embassy in Yangon. Executive chef David Mottl delivers a fine-dining experience of local dishes (like Langkawi lobster) with contemporary European twists. Kayuputi’s non-culinary treat, aside from its wonderfully eccentric décor, is the hammock-style seating suspended over the water. It’s perfect for enjoying a cocktail and watching the sun set over a distant shore. On returning to one’s room, there is likely to be found a tray of chocolates, or a scented bath scattered with rose petals.

The St Regis Langkawi also houses one of the brand’s most comprehensive Iridium Spa centres. The treatments, including one for couples, are not taken lightly. One enters the space – and not only physically – after a serene pause in the “departure lounge”, thereafter to be transported to another level of relaxation and contentment.