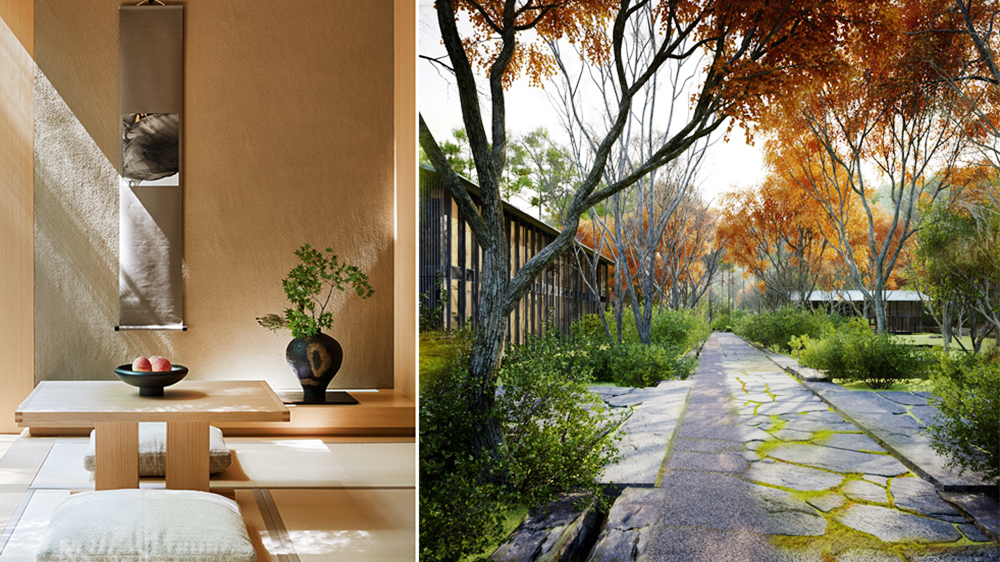 Aman, known for opening luxurious retreats in off-the-beaten-path locales, shook things up a bit in 2014 when it found a home in Tokyo. But the company’s first urban hotel couldn’t have found a more suitable destination. With Japan’s predilection for minimalist design lining up with Aman’s aesthetics, coupled with the unparalleled level of hospitality offered throughout the country, it was a natural fit. Quickly becoming a favourite, the brand opened its second property on the island nation less than a year and a half later. Amanemu, a ryokan-inspired resort nestled in a corner of Ise-Shima National Park, further upped the ante with its incredible spa, elegant suites and prime location to experience the region’s ancient ama culture. Now, they’re ready for round three.

After nearly two decades of planning, Aman Kyoto, tucked away at the foot of Mount Daimonji-yama within walking distance of the city’s famed Kinkaku-ji (Golden Pavilion) temple, is slated to arrive this November. Hidden in a once-forgotten, 32-hectare garden, the forested grounds will serve as the perfect hideaway for visitors in search of privacy and relaxation while still affording the opportunity to explore the former imperial capital and its rich history. The resort will be comprised of 24 intimate rooms and a pair of two-bedroom villas starting at 223 square metres. Pulling inspiration from ryokans, all accommodations will be outfitted with tatami mat floors, tokonoma alcoves, ofurobathtubs made from hinoki cypress and floor-to-ceiling windows that will perfectly frame the beautiful scenery.

When you’re not out exploring one of Kyoto’s many venerable temples or wandering through the alleyways of Gion in the hopes of spotting a geiko or maiko, unwind at the Living Pavilion or grab a bite at the on-site restaurant. Serving obanzai-style cuisine highlighting the finest handpicked produce, it promises to be a great addition to the city; just don’t forget to also reserve a bamboo picnic hamper for an idyllic alfresco meal in the forest glades. And while meandering through the moss-covered stone pathways admiring the colorful Japanese maple trees will certainly be a highlight, the spa will most certainly be the property’s crown jewel. Featuring traditional onsen facilities, relaxation and healing in the purest form will be the primary focus, complemented by a range of treatments using local ingredients like green tea, sake and cold-pressed tsubaki (camellia) oil.

Aman will join Four Seasons, Ritz-Carlton and Hoshinoya as the city’s leading luxury hotels. Each property offers something unique, but with its strong sense of place and consistently astounding service, Aman Kyoto will surely capture the hearts of discerning jet-setters. This may just be the brand’s finest resort yet.