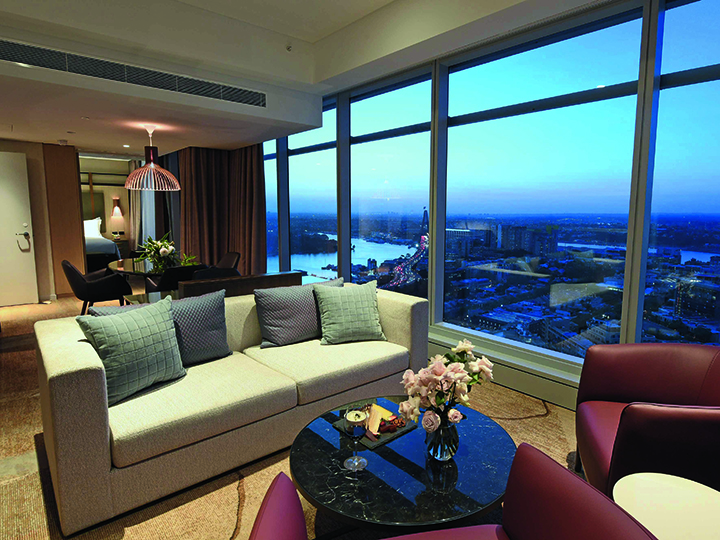 A sparkling addition to the Sydney skyline

Sofitel has opened Sydney’s first brand-new five-star hotel since the Olympics were in town.

A sparkling addition to the Sydney skyline, the Sofitel Sydney Darling Harbour – the first internationally branded luxury hotel to be built in the city centre since the 2000 Olympics – opened on October 6. Designed by multi-award-winning Sydney architect Richard Francis-Jones, the 35-storey tower with its prominent triangular accent and striking porte-cochère is sheathed in a curtain of glass that dances with waterside reflections by day. At night it is spectacularly lit up with a kaleidoscope of changing colours, courtesy of 6000 LED lights mounted into the tower’s facade. But it’s what you can see from the inside that really wows. The 590 rooms, including 35 suites that feature floor-to-ceiling windows, smart TVs, deep and free-standing bathtubs and beautiful design touches reminiscent of vintage Louis Vuitton luggage trunks, have some of the best views in the city. Opt for a Club Millesime room on one of the high floors, a Prestige corner suite, or the top-floor Bellerive Suite and you’ll see Sydney like never before, particularly from the Club Millesime Lounge on the 35th floor. The Sofitel is the highest building on the western shore of Darling Harbour and the glittering lights of the CBD fan out beneath your feet New York-style, wowing even jaded Sydneysiders. Back at ground level, the foyer also puts on an impressive light show, with cascading ropes of light hanging from the ceiling like giant jellyfish, a canopy of glowing crystal fishing net draped above the bar and, in a further nod to the maritime heritage of the site, quirky message-in-a-bottle wall lamps secreted among the 1300 bottles of wine that enclose the restaurant space. There are also plenty of weathered timber features inspired by the wharves, woolstores and warehouses of the old workaday Darling Harbour – and a wall of fish swimming behind the check-in desk. As you would expect from a French-owned hotel group, it’s not just the interiors that overflow with sophisticated Gallic style: the Champagne Bar pours more than 15 varieties of French bubbles, many of a vintage you won’t find anywhere else in town, and is set to become one of Sydney’s most elegant spots to see the sun go down. Try the Soixante-Quinze(aka French 75), a citrusy take on the traditional champagne cocktail with gin and lemon juice that has a kick like the French field gun for which it was named. The hotel’s restaurant, Atelier by Sofitel, serves nouvelle French fare with much flair – think bouillabaisse-inspired yellow tail crudo with saffron fennel and flying fish roe, wild barramundi with pommes Anna, or Darling Downs waygu with confit garlic and charcoal salt, and a sensational selection of French cheeses. The Riviera-esque Le Rivage on the fourth floor is the place to go for cocktails while lounging beside the wet-edge infinity pool, gazing across the city skyline. Even the gym has sweeping harbour views.