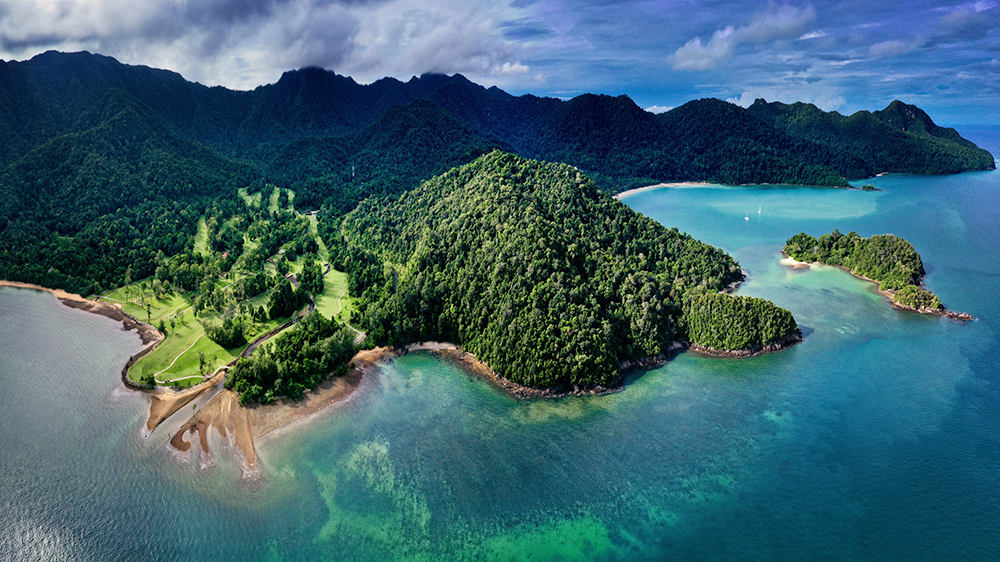 Do good while living the good life at these ultra-green properties.

With constant news of a climate in peril, some of the world’s most luxurious properties are joining the green revolution with a variety of inventive techniques. Many hotels are making a start with simple methods such as switching plastic straws for the paper variety, and providing guests with drinking water from reusable glass bottles, however, we’ve found a few resorts around the globe that don’t think that’s nearly enough.

From anti-poaching initiatives in South Africa and coral-reef restoration projects in Mexico to solar panels in the Maldives that help offset the equivalent of hundreds of flights per year, these 10 resorts are going above and beyond in an effort to make every day Earth Day.

Considering it’s set in the aquamarine waters of the Baa Atoll UNESCO Biosphere Reserve, the Four Seasons Resort Maldives at Landaa Giraavaru has an added level of environmental responsibility—one which it takes very seriously. So seriously in fact that the resort recently installed 3105 solar panels on the rooftops of its staff village, making it one of the country’s largest resort-based solar installations. The perennial sunshine bathing the island nation means the panels will help power the resort’s guest rooms and electric golf carts and amounts to an annual savings of 300,000 litres of diesel and 800 tons of CO2—the equivalent of 544 flights between London and the Maldivian capital of Malé each year. 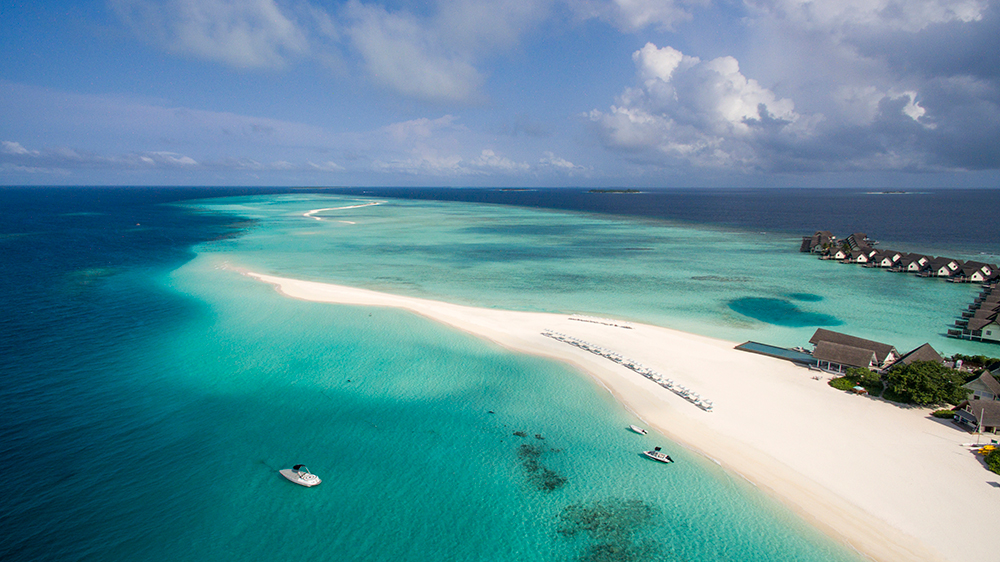 The Datai Langkawi is surrounded by the ancient gnarled trees, hanging vines and canopies of a 10-million-year-old rainforest. With that kind of natural environment to protect, it’s clear why the resort’s 2018 renovation, led by architect Kerry Hill and interior designer Didier Lefort of DL2A, focused heavily on sustainability. The new on-site nature centre is run by a team of dedicated naturalists and marine biologists who not only lead workshops and nature walks for guests, but have launched the “Fish for The Future” program, creating artificial reefs that provide a sustainable ecosystem for local fisheries. 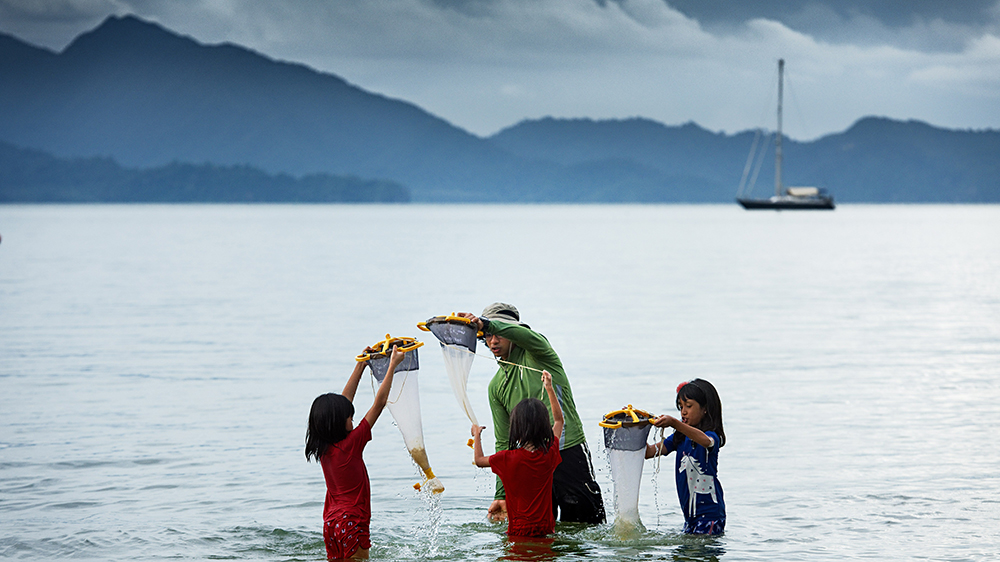 Named for a Sanskrit word that means “the garden in the third heaven,” Trisara is practically nirvana—and not only for its striking infinity pool villas, white-sand beach and emerald hillside location. Its high-concept restaurant PRU, presided over by chef Jim Ophorst, was bestowed with Phuket’s first Michelin star in 2018, and is a promised land for eco-conscious foodies. All ingredients on the six-or-eight-course rotating menu are sourced entirely from within Thailand, and mainly from Trisara’s very own four-acre organic farm, which uses natural pesticide alternatives and compost from the restaurant’s leftovers. 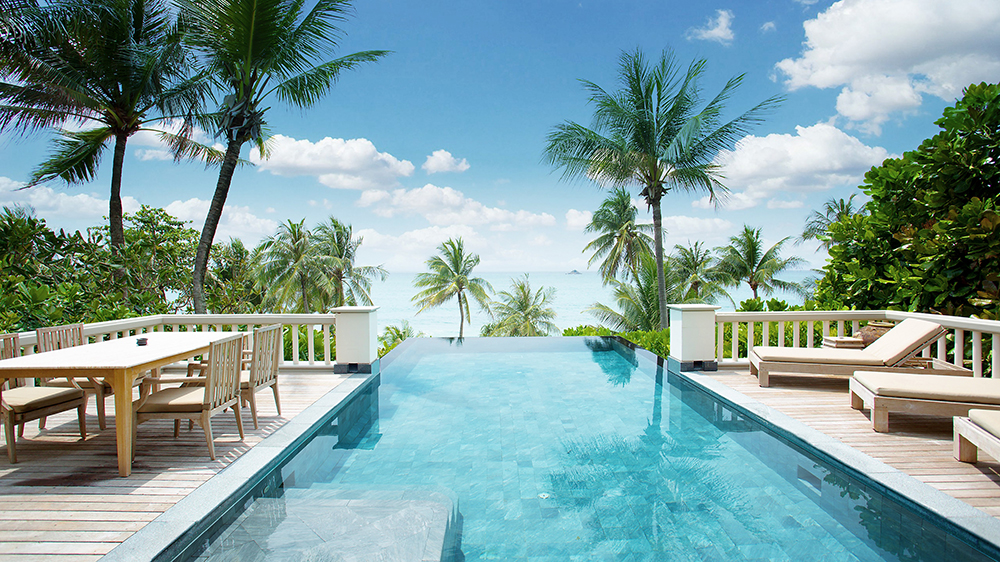 Giving back to the local community is paramount to the ethos of Fairmont Mayakoba, even if that community is one of the world’s largest aggregate collections of whale sharks whose home is the Mesoamerican Reef offshore from the hotel’s dazzling stretch of sugary beach. In partnership with Oceanus AC, a Mexican organization focused on coral reef reforestation, the resort is allowing guests to get involved in the combat against coral bleaching and loss of marine habitats by participating in coral reef reforestation and adoption programs. 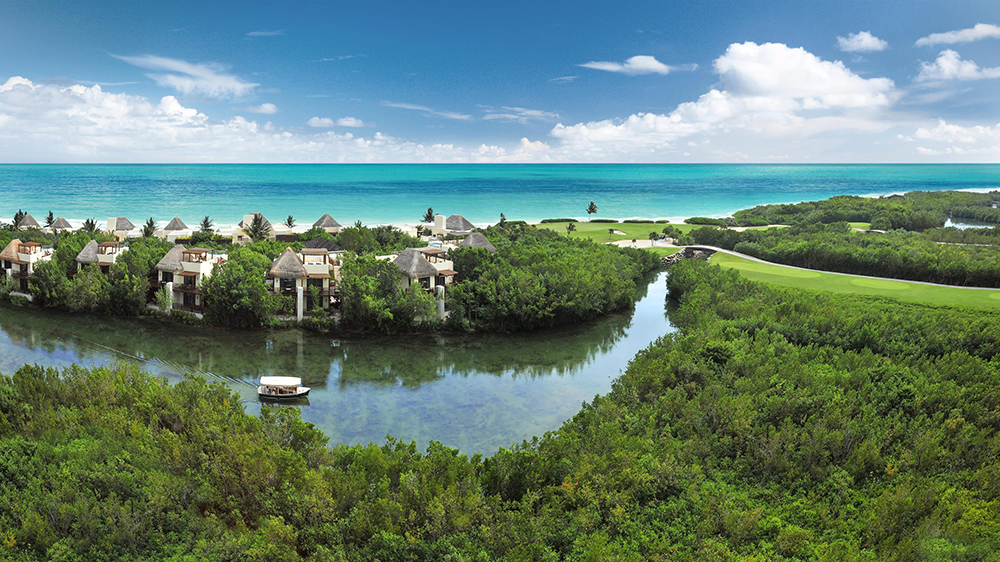 Melding with the ancient land, culture and people of the Peloponnese is the concept behind Amanzoe, Aman’s Porto Heli resort that resembles a modern Grecian temple. With a belief that supporting the local community promotes true sustainability for the area, the property runs a multitude of waste-reduction initiatives, including one that donates used guest slippers, worn staff uniforms, bed linens and room curtains to the KESO Institute, which teaches unemployed women how to sew. The donations are then artfully transformed into new items, thus creating jobs for the women, and importantly, keeping the old textiles from ending up in a landfill. 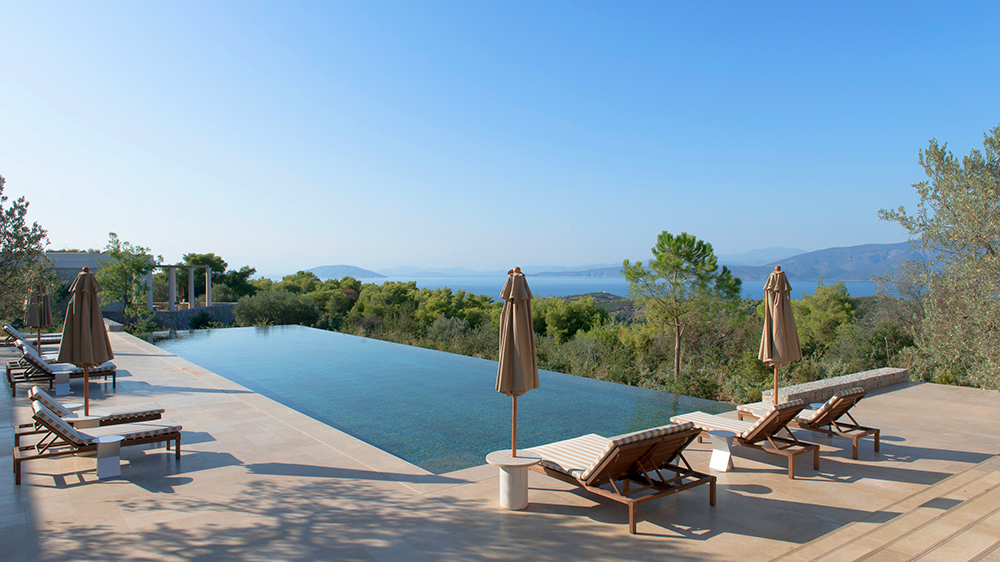 The Tortuga Bay Hotel set within the Puntacana Resort & Club is famed for soft sand, lapping turquoise waters and jaunty yellow villas with interiors designed by the late Oscar de La Renta. But the complex is also making waves in the area of sustainability. The Puntacana Resort & Club’s not-for-profit foundation has embarked on multiple ambitious environmental projects to reduce their footprint, including a zero-waste program that vastly reduces items being sent to landfills, expanding its wastewater treatment plant which returns 100 per cent of the water to irrigation purposes. In 2018, the resort also opened the Caribbean’s first Center for Marine Innovation. 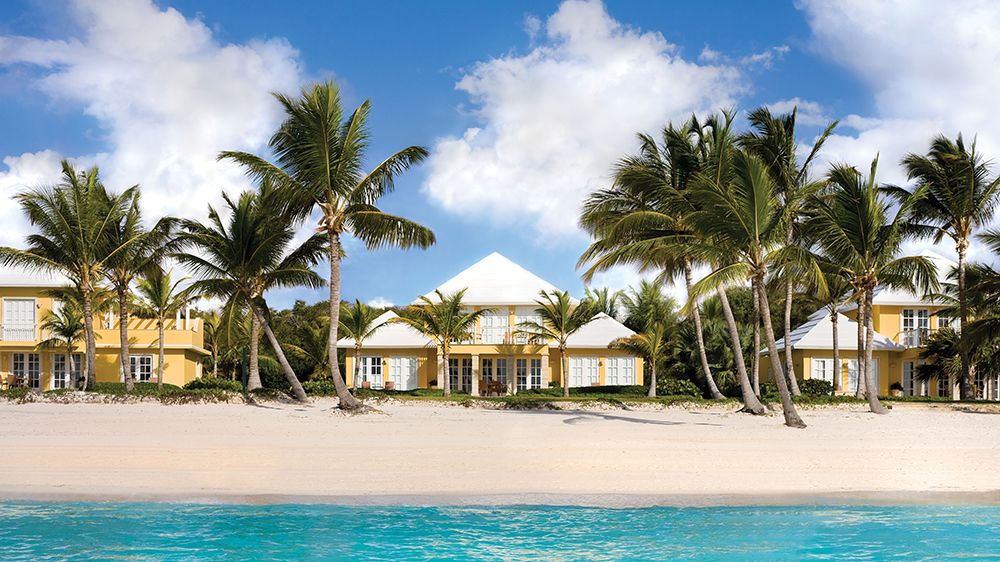 Set 260km north of the South African city of Durban, Thanda safari lodge sits on a 34,600-acre Big Five private game reserve with a luxury tented camp, bush suites and a massive private villa complete with a helipad. The lodge takes its name from the language of the local Zulu people—thanda means “love,” and that’s just what the property is showing South Africa’s population of rhinos. In collaboration with Project Rhino KZN, an organization dedicated to anti-poaching and conservation programs, Thanda lets guests participate in the Thanda Safaris Ulwazi Research & Volunteer Program, which tracks and darts rhinos for identification purposes before releasing them back into their habitat. Since it’s launch, the program has been successful in saving dozens of rhinos from poaching. 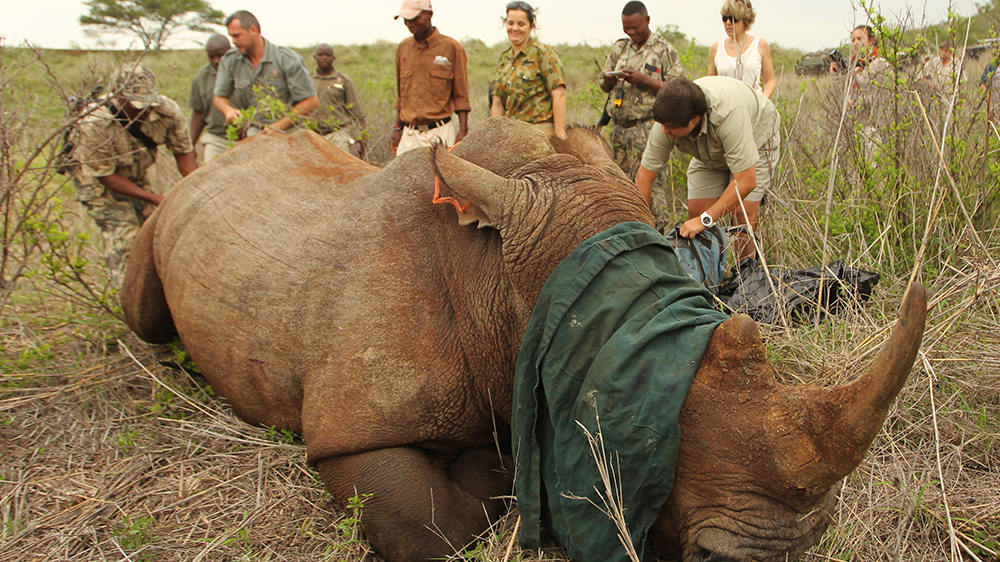 Finland was recently named the world’s happiest country according to the 2019 World Happiness Report, an accolade it has won for two years running. A connection with nature is claimed to be the reason behind this high-level cheer, a statement the Arctic TreeHouse Hotel embodies daily. The Northern Lights are a frequent visitor aglow eerily above the streamlined, geometric glass-and-wood houses, all constructed of sustainable Finnish wood that the property contributes to maintaining by planting 5000 to 10,000 new seedlings per year in the surrounding forest. 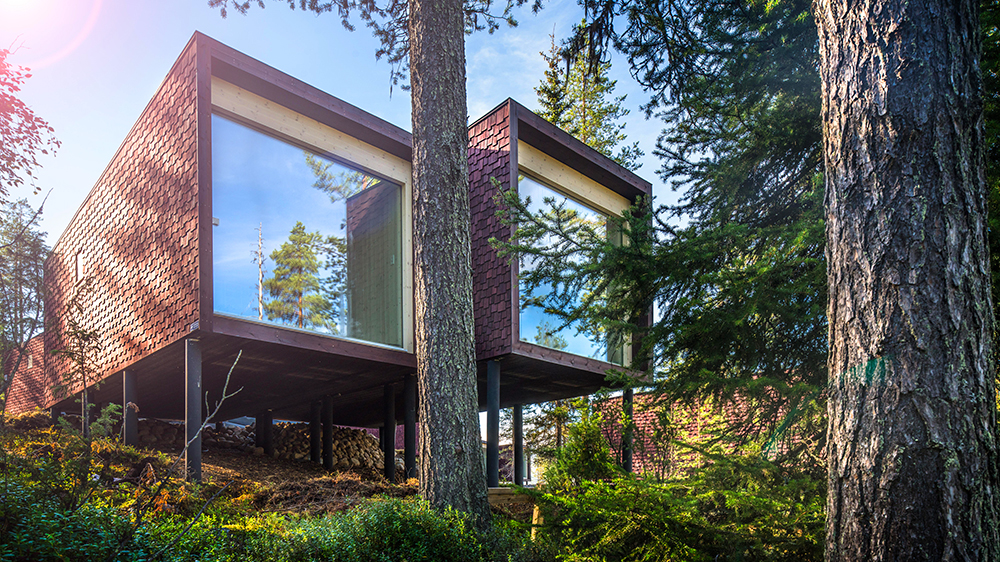 Opened in fall 2018, the goal of the new Six Senses Uluwatu is to blend entirely within the natural surroundings of Bali’s southwest coast. This paragon of sustainable architecture was built on land carved from a sea-hugging limestone cliff, and then entirely reconstructed in a futuristic design using the same limestone. All resort furniture was sourced from sustainable wood found within local regions of Bali. Water also plays a leading role in the hotel’s ambience, and the water features that permeate the resort grounds are fed by a mix of rainwater catchment and resort wastewater treated at the on-site water treatment plant. 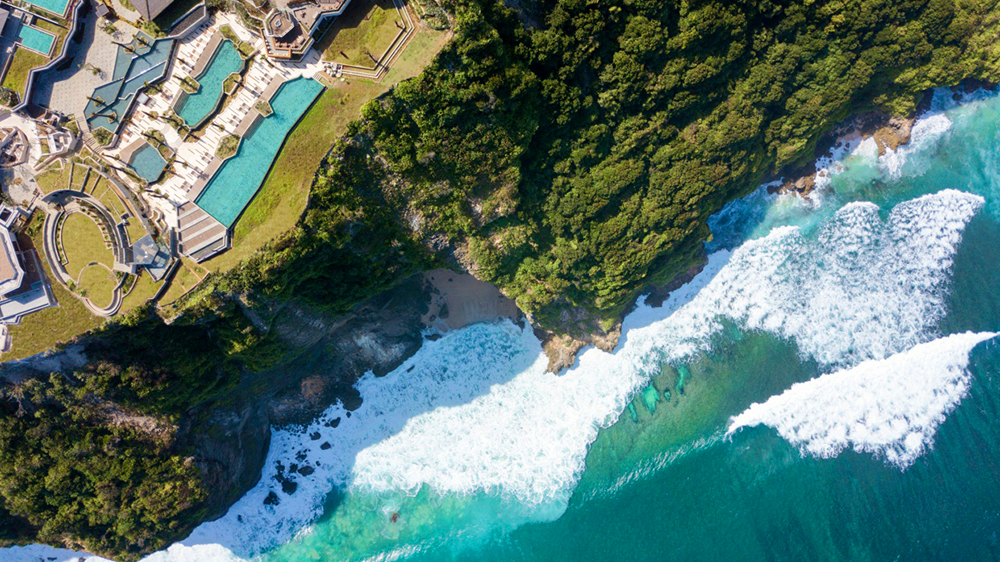 Resorts set in the most remote locations are often champions of sustainability, not only from a desire to do right by the planet but also out of sheer necessity. AndBeyond Sandibe Okavango Safari Lodge is no exception. Bordering the vast Moremi Game Reserve, the lodge uses 63 per cent renewable energy from an on-site solar plant. Perishable products that must be flown in from elsewhere are transported in specially designed, reusable cooling containers, eliminating the use of the single-use plastics and Styrofoam often used in food freight. Additionally, plans for 2020 include installing a bottling plant to eliminate 100 per cent of plastic water bottles. 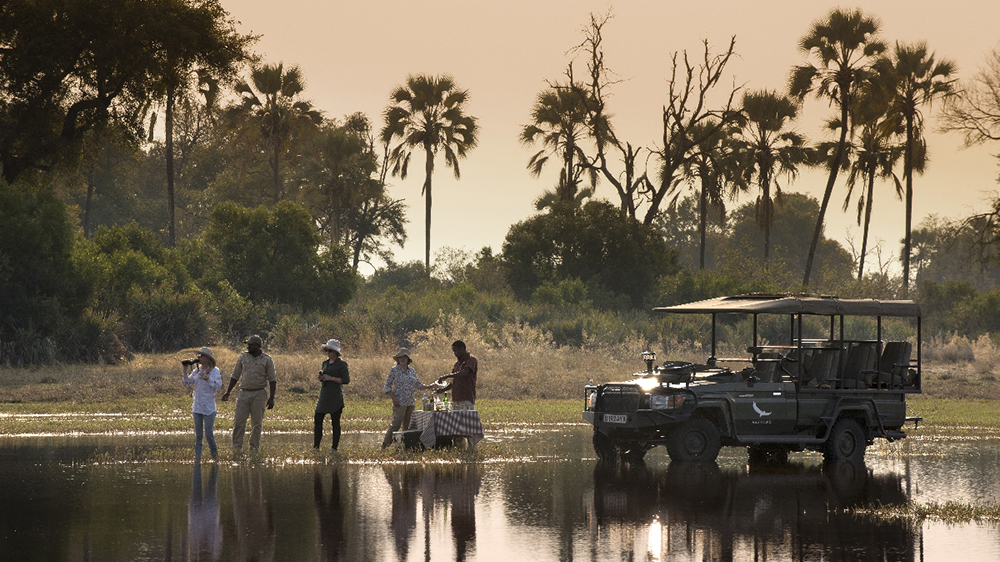