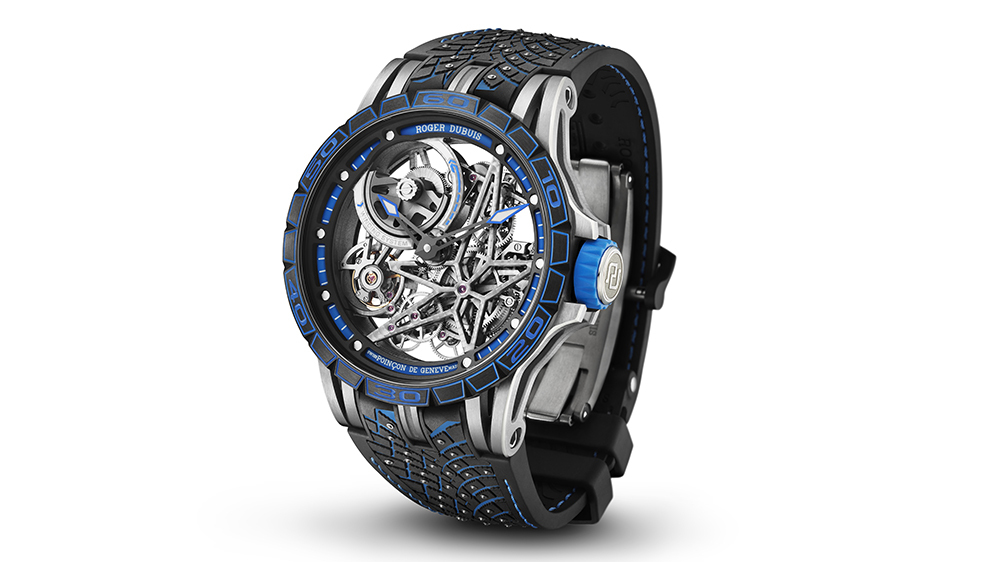 The limited timepiece is named after Pirelli’s new line of studded winter tyres.

Roger Dubuis knows that an exclusive watch deserves an equally exclusive launch event. So what better way to debut its latest Pirelli collaboration, the Excalibur Pirelli Ice Zero 2 Spider America Edition, than with some ice driving in Aspen, Colorado?

The Swiss watchmaker gave a lucky few the chance to celebrate its latest sporty timepiece by taking a Lamborghini for a spin on some ice, according to a press release. While that may first sound a bit random, it’s not because the watch is named for Pirelli’s new line of studded winter tyres, which each of the Italians supercars was outfitted with.

The Excalibur Pirelli Ice Zero 2 features the brand’s famous Poinçon de Genève-certified astral skeleton signature movement. This is housed in a typically sturdy titanium case that’s offset with some appropriate black and ice blue accents. The touches of blue extend throughout the watch, including on its state-of-the-art Ice Zero 2 studded tyre strap with the Pirelli Cinturato intermediate printed on the inside pattern on the inside. The watch also comes with a bi-material strap featuring a black rubber base and blue rubberTech inlay.

While its watches have always come first, Roger Dubuis has long prided itself on its ability to throw bold events that capture the thrilling sense of adventure its timepieces have come to embody. And its Aspen event was no different. Pirelli’s new tyres were designed specifically for high performance on ice in the most extreme winter conditions, as is the Excalibur Pirelli Ice Zero timepiece, so there was really no better way to portray this than by letting people speed around the famed ski town’s ice-covered roads in a Lamborghini.