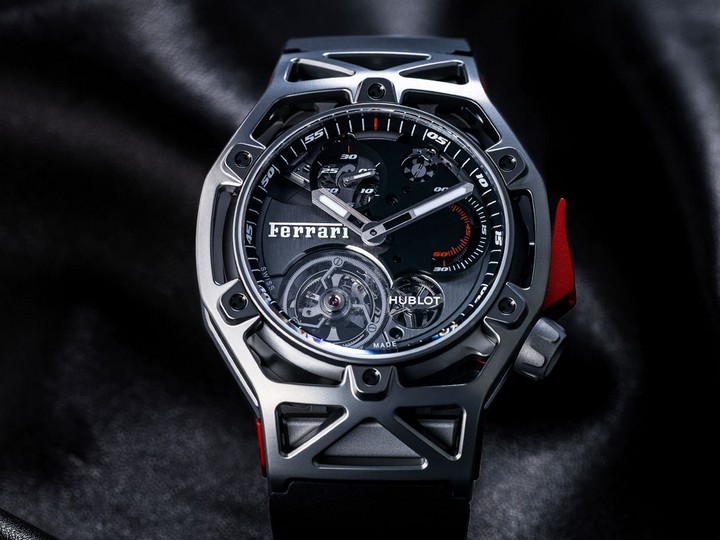 The Techframe Ferrari Tourbillon Chronograph is what happens when Hublot gives Ferrari carte blanche to design its very own anniversary watch.

Ferrari’s 70th anniversary was reason enough for Hublot to give the Italian supercar maker carte blanche to create its dream watch. Hublot’s attempt to tame the prancing horse has not only been a resounding success, it has redefined the very concept of an auto-inspired timepiece.

The first watch borne out of this alliance was made with Hublot’s exclusive Magic Gold, touted as the world’s only scratch-resistant gold alloy, and following the Big Bang Ferrari Magic Gold, Hublot launched the MP-05 LaFerrari.

In the six years since this partnership began, Hublot has done very well by Ferrari. So it goes without saying that on the occasion of Ferrari’s 70th anniversary, Hublot would spare no expense in doing something truly extraordinary. Meet the Hublot Techframe Ferrari Tourbillon Chronograph. Its skeletonised case resembles the chassis of a classic Ferrari. Techframe was, in fact, designed by the Ferrari Design Centre, led by head of design Flavio Manzoni. Obviously more used to creating larger objects such as supercars, this is the first time Manzoni oversaw a project much smaller in size but no less technical in concept.

The decision to endow Techframe with a tourbillon chronograph movement was a deliberate one. In fact, the starting point of the entire design process began with the movement, also regarded as the engine of the watch.

According to Manzoni, it is always necessary to create a set of technical and aerodynamic solutions to maximise the engine’s performance. The shape of all Ferrari cars must respect this philosophy. Yet, it is also very important to achieve an artistic result. Says Manzoni, “A Ferrari must always be a piece of art.”

This fusion between technical and artistic forms the cornerstone of Techframe. Manzoni elaborates, “The sophistication of this movement is very high, so it’s important for this watch to be the top of its class. Also, it’s very beautiful to make the movement visible. The design of the dial is based on this intersection of extreme elements, almost in contrast with the cage, yielding an impressive combination.”